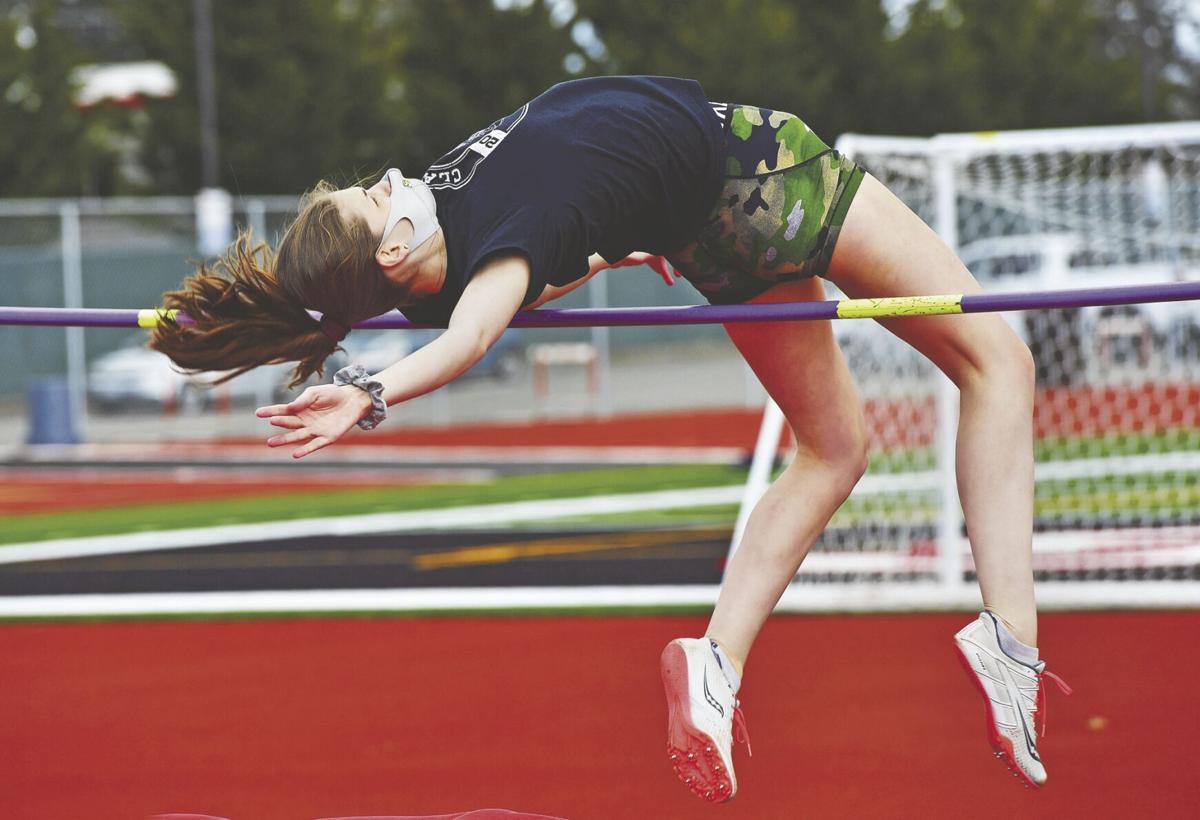 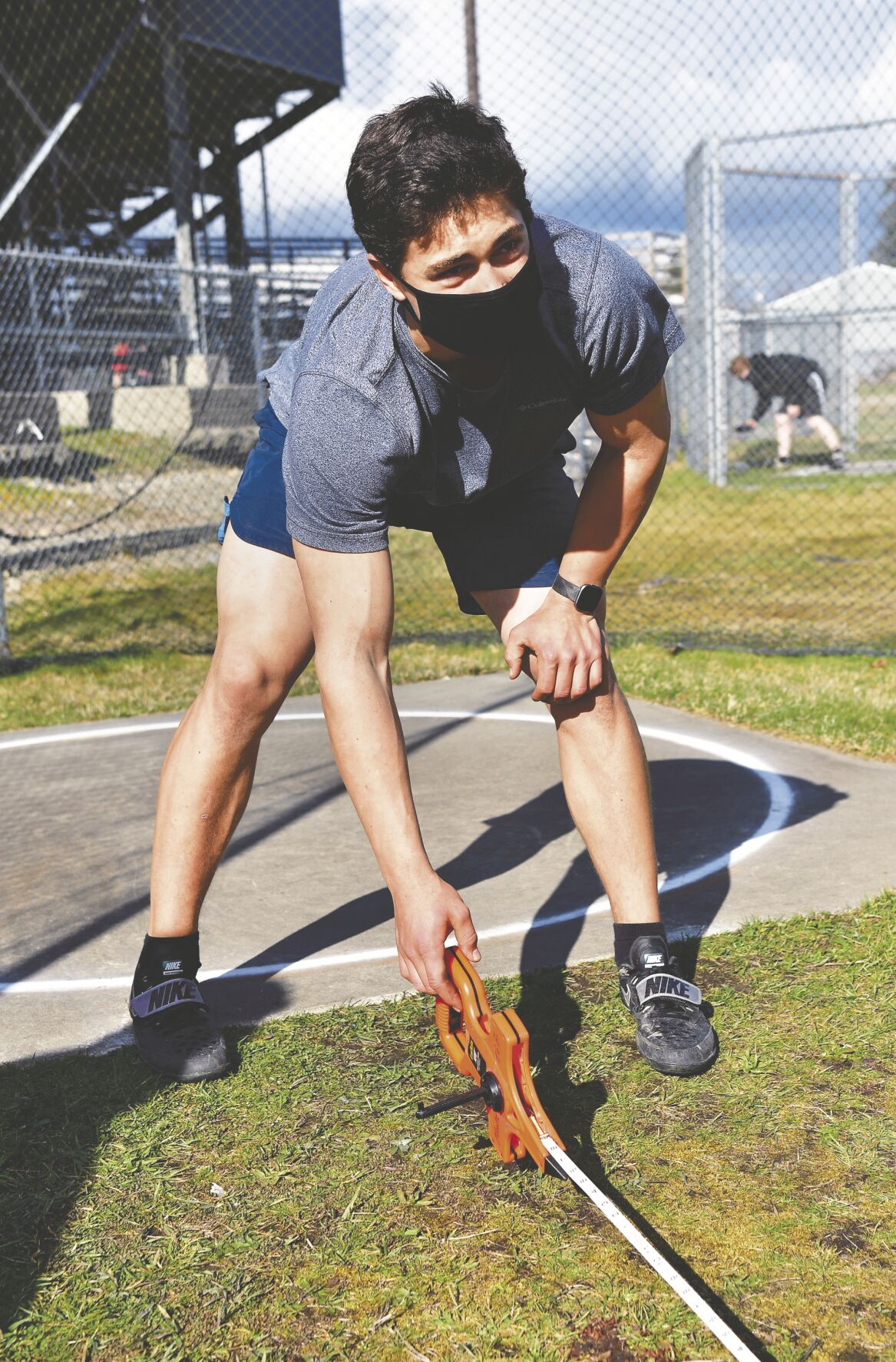 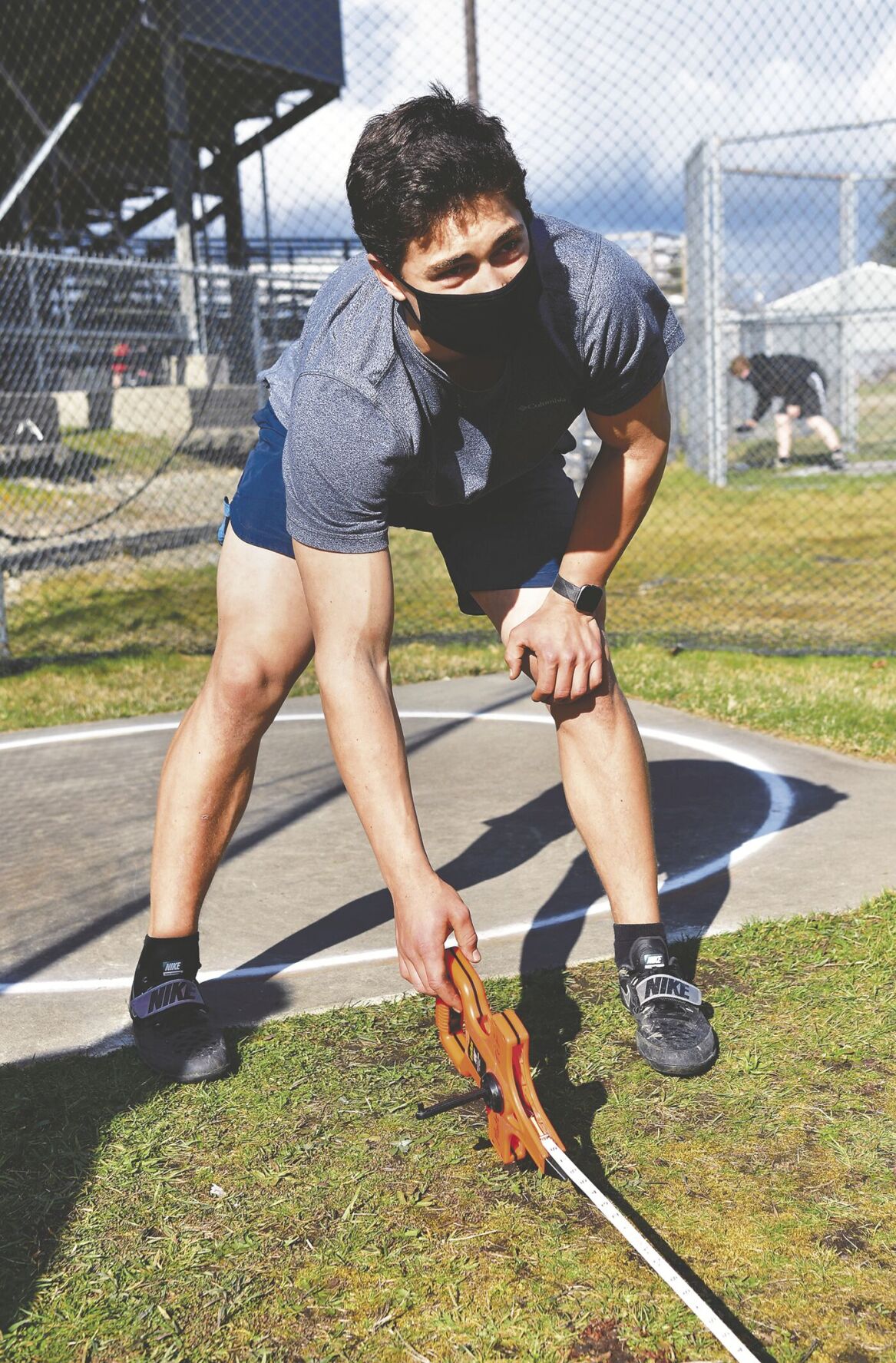 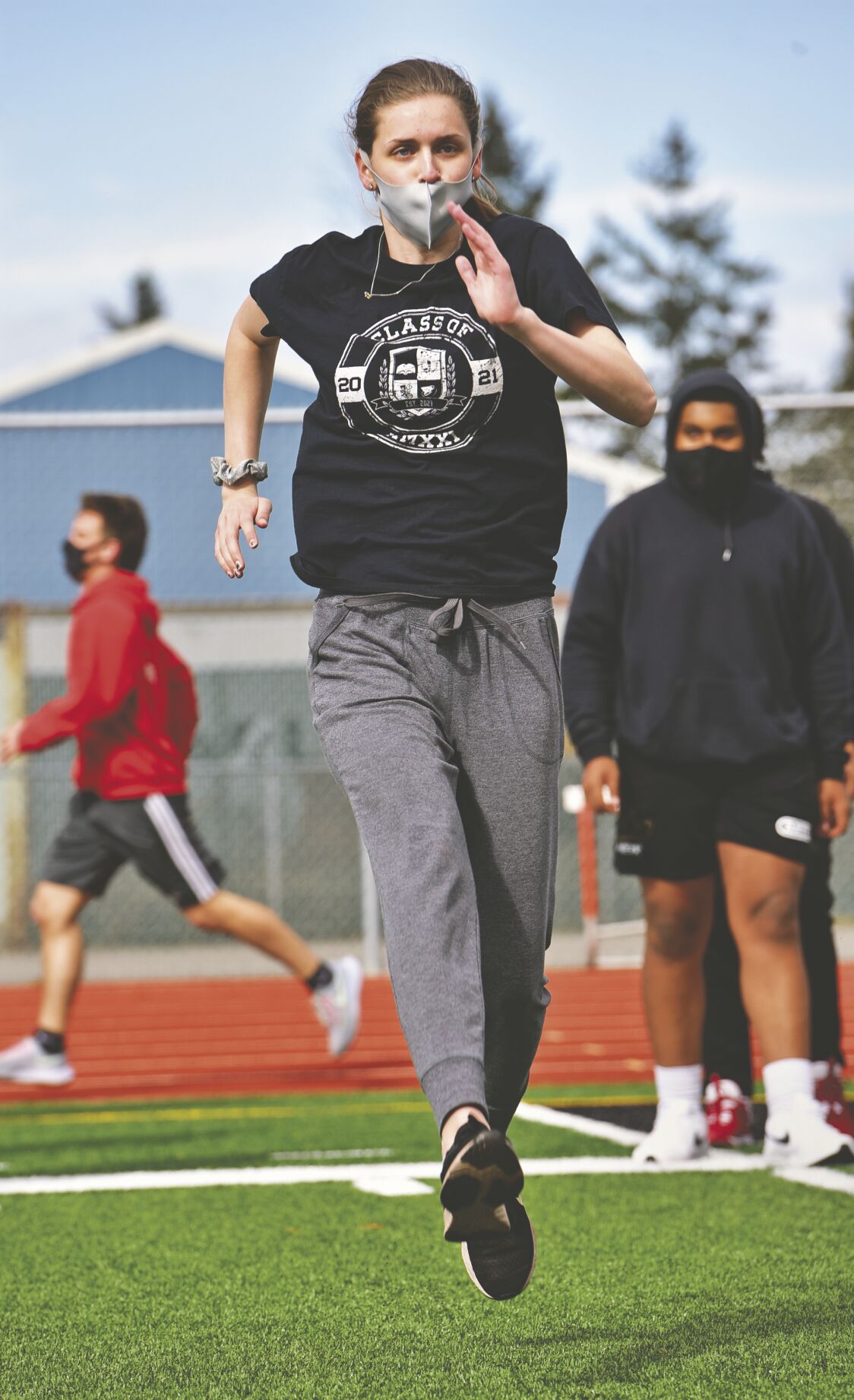 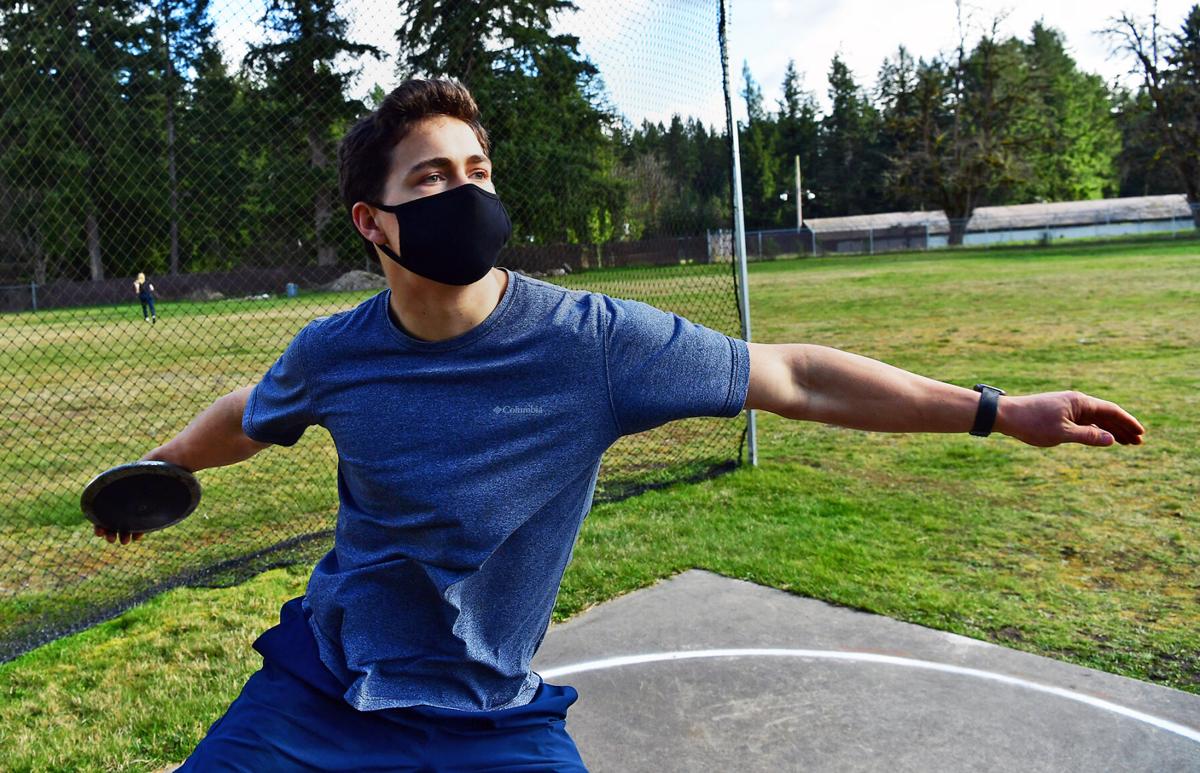 Athletes were hungry as they got outdoors to prepare for a shortened six-week season that comes after a year of school closures due to the COVID-19. Many are unsure how they’ll match up against regular rivals, but they’re thankful nonetheless to get an opportunity to measure themselves against conference and district foes.

Yelm will host North Thurston on Friday. Tenino will be at Montesano on Thursday. Rainier will be hosting the first Central 2B League meet at home.

Here are some of the athletes to watch as this season gets underway.

Her sophomore year, Abigail Carlson placed second in the high jump at the WIAA state championships with a personal-best jump of 5-feet, 5-inches. It was her first year competing at the event, and she was looking to make strides last year when the coronavirus pandemic hit.

After a restful and prolonged offseason, Carlson, now a senior, is back to the block mats and hoping to make the best of the season.

“I’m antsy, I’m so antsy — I’m, like, let me outside, and it’s been fun being out here again, so I’m super excited to see what this year has to offer,” said the reigning District 3 champ, who’s looking at either attending Saint Martin’s University or Central Washington University.

Carlson said she feels behind but is ready to put the work in to do her best this season.

The Beavers this season will return a small and mature roster of athletes to the track, and junior Ashley Schow is one of them.

Her freshman year, Schow placed fifth at the 1A District 4 meet with a throw of 90-feet, 8.5 inches. She also had an appearance throwing discus at the Evergreen 1A League Championship meet.

Two years separated from league competition, the Beavers as a team could show big improvements after an absence of athletes at the 2019 state meet.

The Mountaineers’ Jeremiah Nubbe is a force to be reckoned with.

Now a junior, Nubbe has hoped to compete in a Division I program post-high school, and he’s got a 4.0 GPA to go with his athletic success.

With a shortened season this year in the Central 2B League, Nubbe has the potential to throw a perfect discus season, if not close to it. He’s also a top-15 high school thrower in the country, according to his coaches, so there’s that.

Gonzaga-bound senior Bryce Cerkowniak twice broke Yelm’s school record in the 3,200-meter race his sophomore year, bringing it down 10 seconds over a season.

Two years removed from that, and Cerkowniak shows no signs of slowing down.

After a near-perfect cross country season, Cerkowniak is switching his joggers for track spikes as he returns to the 1,600-meter and 3,200-meter races.

Alia Garner was nothing if not consistent in the pole vault for the Mountaineers during the last regular season.

As a sophomore during the 2019 season, Garner made big improvements over her previous year and ultimately took third at the state 2B meet with a vault 9-foot-6, which matched her personal best.

She’ll also likely be going out for her school’s pole vault record of 10-foot-9, Henry said, which was set in 2005 and tied in 2012. While it may seem ambitious for the Rainier senior, Henry said COVID-19 has allowed for a large competition gap that may throw some curveballs.

Kaeley Schultz was one of many talented Rainier freshmen during the 2019 season who made considerable strides and went on to compete at state.

Schultz was and continues to be a utility athlete for the Mountaineers, throwing time into short-distance running, throwing and jumping — and with eyebrow-raising results.

Her freshman year, Schultz clinched fifth in high jump at the 2B state meet with a 5-foot performance, and it’s safe to say you can expect to see her close in on sub-6-foot territory by the end of the season.

• Thursday, April 22 — 2B Central League Championship at a site to be determined later

• Saturday, May 1 — District meet at a site to be determined later