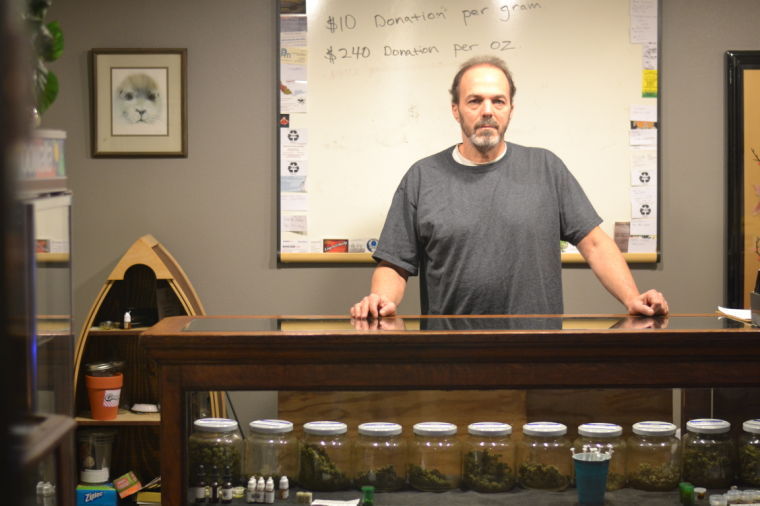 John Eagan, owner of Canna Brothers medical marijuana dispensary, stands behind the counter of his store, located outside the city limits of Yelm. Eagan says he’s concerned about the future of dispensaries as the state prepares to sell recreational marijuana. 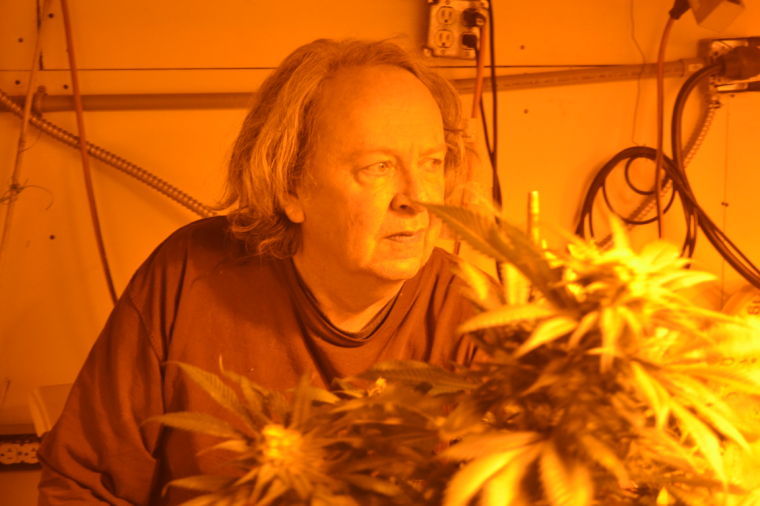 Jeff Gilmore of Tenino sits behind a marijuana plant in his garage under the glow of grow lights. Gilmore applied for licenses from the Washington State Liquor Control Board to produce and process marijuana under the state’s new recreational marijuana laws.

John Eagan, owner of Canna Brothers medical marijuana dispensary, stands behind the counter of his store, located outside the city limits of Yelm. Eagan says he’s concerned about the future of dispensaries as the state prepares to sell recreational marijuana.

Jeff Gilmore of Tenino sits behind a marijuana plant in his garage under the glow of grow lights. Gilmore applied for licenses from the Washington State Liquor Control Board to produce and process marijuana under the state’s new recreational marijuana laws.

The landscape of marijuana is changing in Washington state and in Thurston County.

Retail stores selling legal recreational marijuana are set to open in the spring, and the Washington State Liquor Control Board, which oversees the stores, wants the state Legislature to pass laws that would make the state-regulated stores outlets for medical marijuana, too.

That means medical marijuana dispensaries like Canna Brothers in Yelm could soon meet their demise, even as budding entrepreneurs in the county, such as Jeff Gilmore of Tenino, are presented with new opportunities.

The New Face of Marijuana

Gilmore has applied to be a licensed marijuana producer and processor under the liquor control board’s new rules. If approved, he would be selling marijuana to retail stores.

Gilmore said he isn’t sure he’ll make a good living — “I’m not sure if any farmers are making a good living,” he said — but hopes to make money on which to live.

When Gilmore graduated from college in the 1970s, Boeing was in a slump and there were no jobs in Washington, he said. In the face of unemployment, he turned to growing and dealing marijuana as a source of income.

“I seem to have a desire for high pay and little work,” he said with a laugh.

He had an opportunity to grow marijuana in Northern California, then became a dealer, he said.

He’s been dealing marijuana for 35 years.

“I’ve never had a day job,” he said. “I’ve been a cold stone pot dealer my entire life.”

Now, he hopes to work with the system.

“I like trying to work with the system and create a system,” he said.

He even sees a silver lining to the taxes that will be imposed on legal weed.

“When you can pay taxes, you get to … (complain) about them, right?” he said.

Gilmore said he’s most excited the new law will decrease the amount of people who are imprisoned for marijuana-related crimes. It’s a benefit to the new law that dwarfs all other aspects for him.

“If nobody ever goes to jail ever again for marijuana, I will be perfectly happy never making a dime in the industry,” he said. “That drug war was such a horrid experiment.”

Gilmore said he’s passionate about imprisonment for marijuana because he was put in jail for two years in 1992 for letting a terminally ill person grow marijuana on a piece of property he owned.

“There’s going to be a day in your life where, if you have children, that one of them’s going to smoke pot,” he said. “It’s just inevitable and … their lives can no longer be destroyed by some overzealous prosecutor trying to make a point.”

Although saving people from jail is his main passion, Gilmore said marijuana could stimulate the economy, too.

Growing marijuana has become a craft, he said, noting there are three main variables you can control: environment, nutrients and genetics.

Growers can play with the genetics to come up with new strains, Gilmore said. He has two proprietary genetic strains.

Growing indoors allows one to micromanage the climate, Gilmore said. Outdoors, you’re at the whim of mother nature — which is not conducive to marijuana in Western Washington, he said. “We are not Northern California, that’s for sure.”

As the new system takes effect, Gilmore wants to see an opportunity for small farms to thrive.

“I certainly want to make a situation that works for the family farms as opposed to corporate entities,” he said.

He envisions marijuana farms as ecotourism destinations, akin to going to Spooner Farms or the Rutledge Corn Maze.

Medical Dispensaries Look at the Future

Many of the patients that frequent Canna Brothers marijuana dispensary in Yelm are worried about the future of medical marijuana, according to John Eagan, the dispensary’s owner.

The liquor control board recommended to the state Legislature in December that collective gardens — which supply medical marijuana dispensaries with its product — be eliminated.

They also recommended medical marijuana patients be allowed to grow six plants for personal use, instead of the 15 plants currently allowed under state law.

The recommendations attempt to create one system for both recreational and medical marijuana.

“I’m disappointed with the way they’re going about it because this is helping out a lot of hurting people,” Eagan said.

Canna Brothers has been in business for about three years, he said. People come from Yelm, Rainier, Roy and as far away as Grand Mound to purchase marijuana from the business, he said.

Eagan said he thinks the liquor control board’s recommendations come down to greed, which is bad for patients.

“Some people will be able to find relief, but most won’t,” he said. “We study up and figure out which kind of marijuana will do what for you, take care of your ails,” he said.

Eagan said some people are concerned about the possibility of pesticides being allowed in state-regulated stores. He said the price of marijuana under the state may double.

“We sell for $10 a gram here and we try to keep everything low and affordable,” he said. “I’m not here to make a killing off anybody. I just like to make a living and help people out.”

Eagan said if the Legislature enacts the liquor control board’s recommendations, he would get in on a class-action lawsuit if one forms.

“This is how I make my living now, and to rip it out from under us — there’s a lot of people out there right now making a living off of this,” he said. “Their excess, they grow at home, they bring it here and we donate it to people who can’t grow. If they take away the growing rights, then we have no place to get our stuff.”

Eagan said he would not pursue involvement in recreational marijuana if dispensaries are essentially outlawed.

“I don’t want to work for the state,” he said. “I think what they’re going to do is they’re going to make it so expensive it’s going to push it back into the underground, black market type of stuff.”