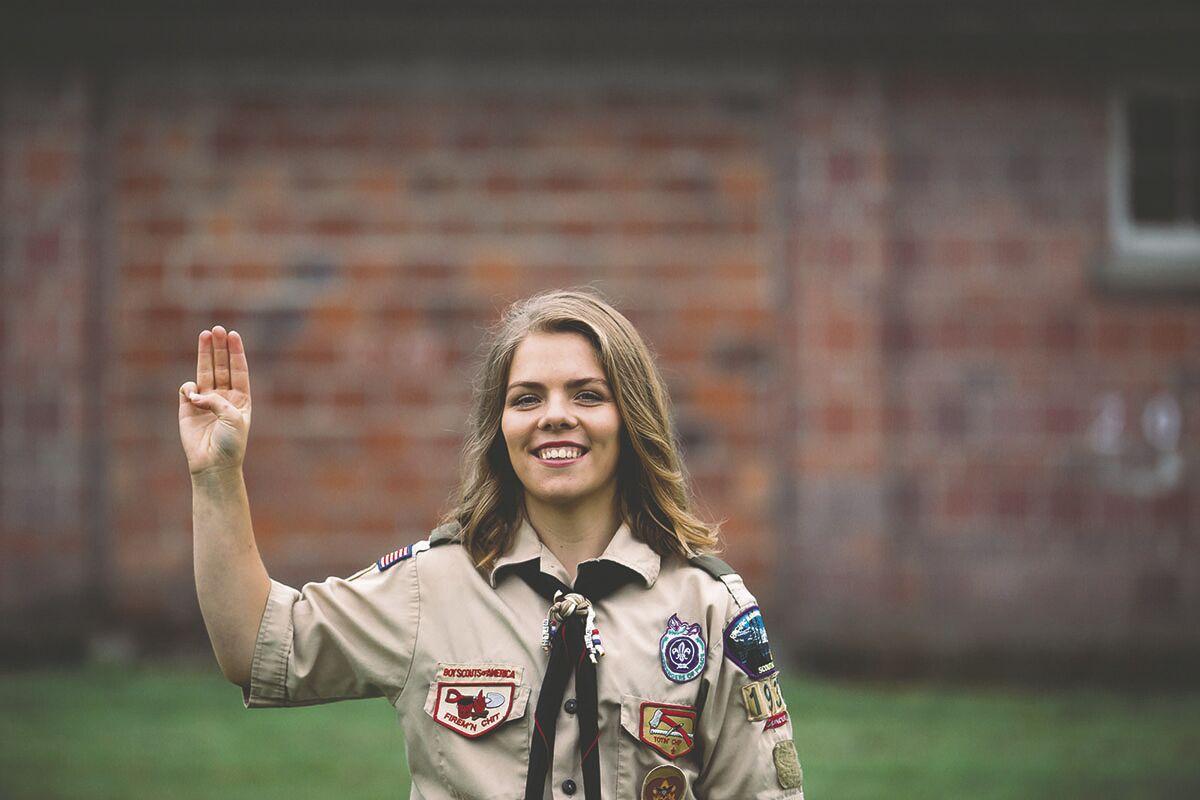 Tayler Thomas, 17, of Yelm will be among the first girls to earn the Eagle Scout rank. 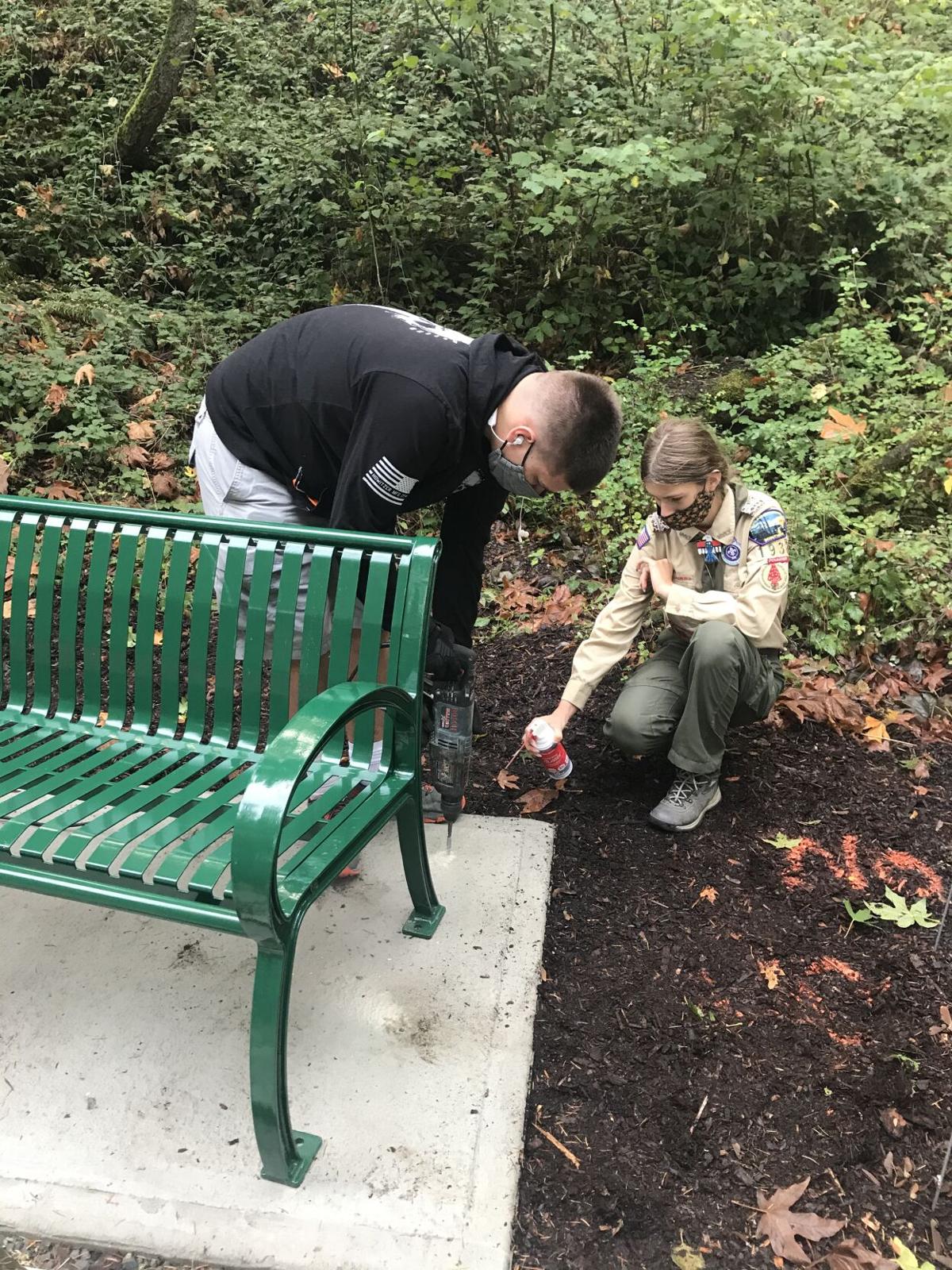 Colleen Fanning and her brother Daniel work on drilling holes to install a bench on Steilacoom Boulevard. 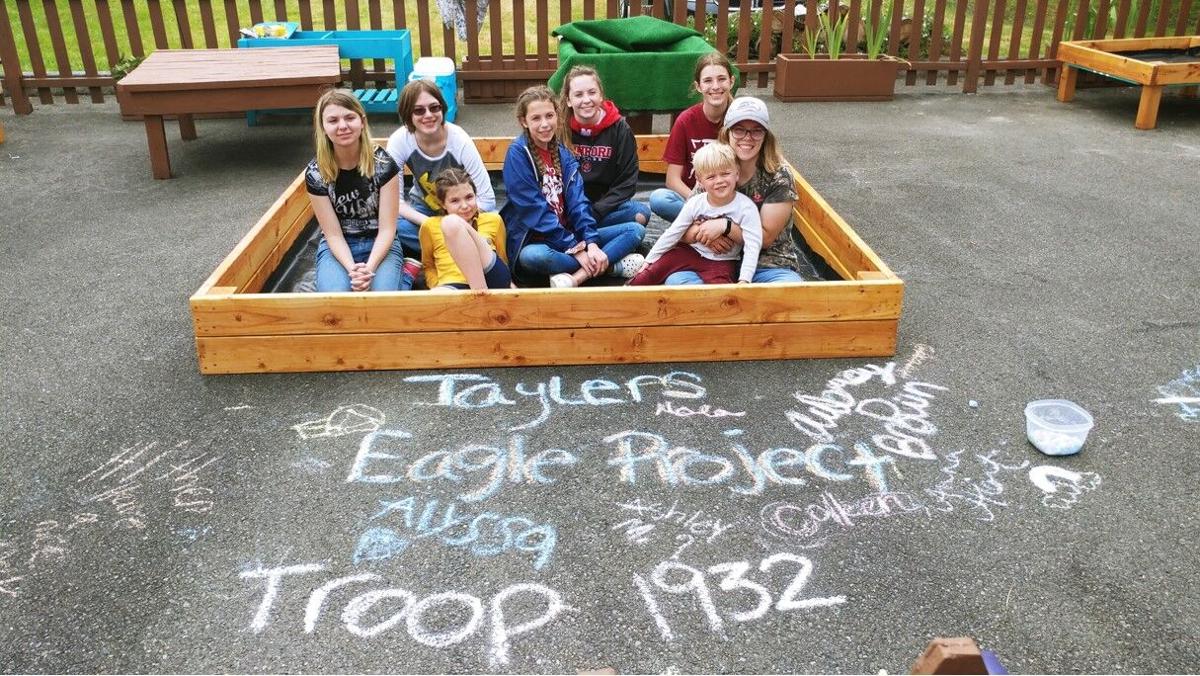 Scouts from Troop 1932 pose for a photo while working on Tayler Thomas’s Eagle Scout project. 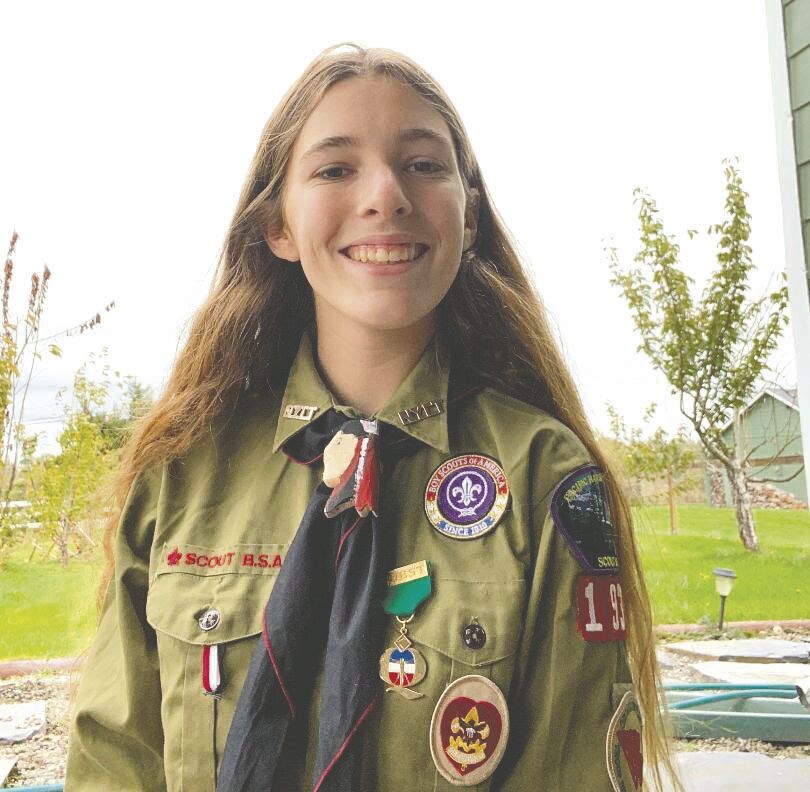 “I didn’t care if I was the first or last, I just wanted to be in the Scouts.”

That’s how 16-year-old Colleen Fanning, of Roy, described the news of hearing she’d be among the first young women nationally to earn the coveted Eagle rank in the Boy Scouts of America (BSA).

She and 17-year-old Tayler Thomas, of Yelm, will be celebrated as the first class of female Eagle Scouts on Feb. 8 next year. Around 10 girls from the Pacific Harbors Council — which includes Thurston, Pierce and Lewis counties — will be included in that class, according to a news release from the council.

The Eagle Scout ranking is the highest achievement and rank attainable in the Scouts BSA program. Only about 4 percent of Scouts earn this rank, which requires having to earn 21 different merit badges and endure a lengthy review process.

According to the council, qualified Eagle Scouts need to demonstrate camping skills, leadership, environmental responsibility, first aid, citizenship and family responsibility, among many other qualities, through badges. Their work also culminates into a final Eagle Scout service project.

Projects are often hard work — but try adding on a pandemic to that, and it can also be a headache.

“She’s done a great job — all the girls have,” said Lisa Thomas, Tayler’s mother. “Especially going on a year with COVID, and having to work around that.”

For her project, Thomas created a small number of sensory play tables for Yelm Learning Tree Preschool. These tables were constructed largely out of wood, then filled with soil, sand and plants and filled with toys.

Fanning installed a metal bench near a sidewalk off Steilacoom Boulevard in a section known by Lakewood locals as the “Tunnel of Trees.” The area is part of a long-term environmental improvement program, and the bench now serves as a resting stop for people to admire the nearby trees and nature.

Thomas’s and Fanning’s projects are part of 365 total service projects that have been done in the three counties, according to the council. These required nearly 1,365 hours of volunteer time that has benefited communities around the South Puget Sound area.

The duo originally made the pages of the Nisqually Valley News back in 2018 when it was first announced that the girls would be establishing the first all-girls BSA troop — Troop 1932, a reference to Amelia Earhart’s famous 1932 trans-Atlantic flight which made her the first woman to fly solo across the ocean — in the area. The troop is currently composed of 13 individuals.

Fanning, a high-energy teen with a noticeable appreciation for BSA, says that it wasn’t easy when they announced they would be forming their own troop.

“At first, it was not a very good reaction. People just weren’t accepting, I guess,” said Fanning, who serves as a Junior ROTC commander and attends Bethel High School as a junior. “Most people are OK with it, but there’s just that small group.”

Her appreciation for the scouts first started with her brother, Daniel. As a tagalong Scout, she would follow along on his excursions and adventures Cub Scouting.

Around Thanksgiving 2017, they received word from the BSA that girls would be allowed and that they could form their own troops. Chris Fanning, Colleen’s father, notes that the organization had been talking about doing this for a long time.

“Best Christmas gift ever,” Colleen Fanning said. “I was so excited. It’s like the first day of school. I was just so excited because I could be a part of something I wanted to be for years.”

Thomas, who attends Yelm High School and is a senior, started her scouting career around three years ago in Adventure Crew.

When they opened the troop for girls, Thomas said she was looking to follow in the footsteps of her father, who also made Eagle Scout.

While obtaining all the merit badges has been a difficult task, Thomas said her favorite part about scouting with her friends has been the involvement.

“It has you get involved not only with other people, but getting involved in your community,” she said. Though, she added, “you have to be self-motivated to do it and I’ve had my parents there to constantly push me.”

The two will be recognized on Feb. 8 next year. The date also celebrates the 111th birthday of BSA.