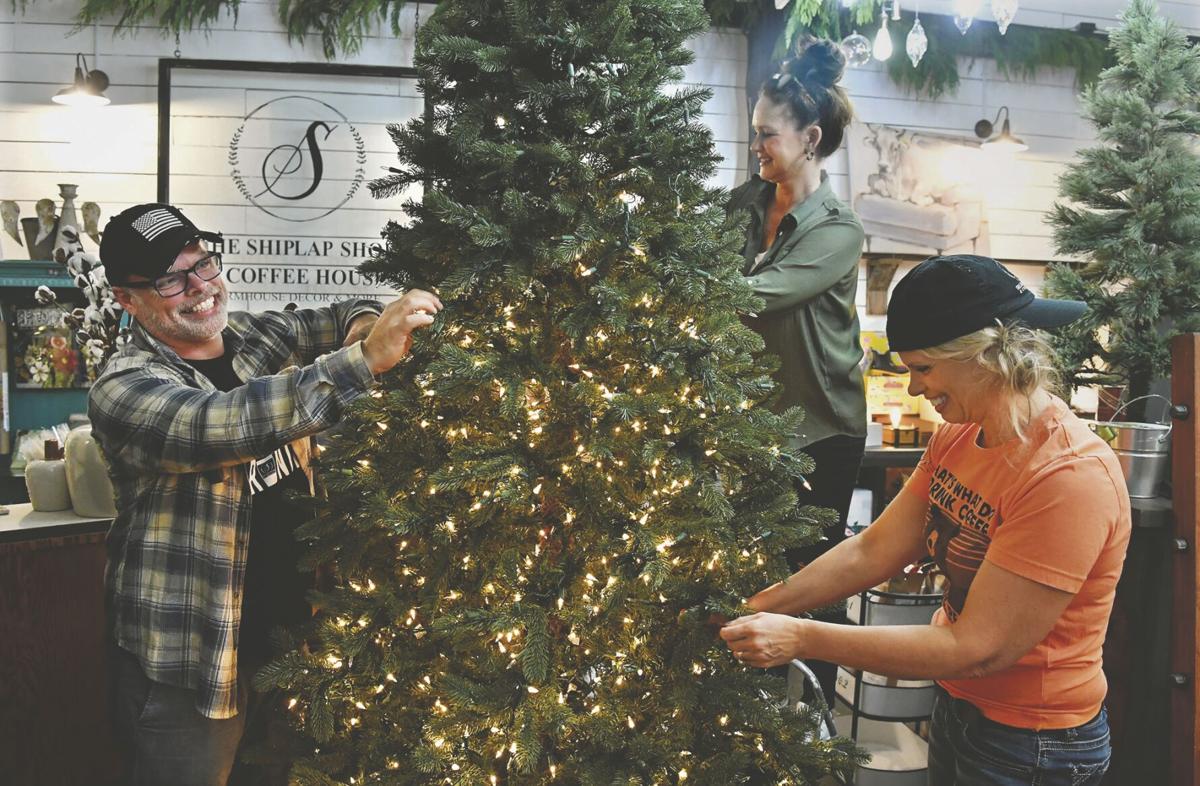 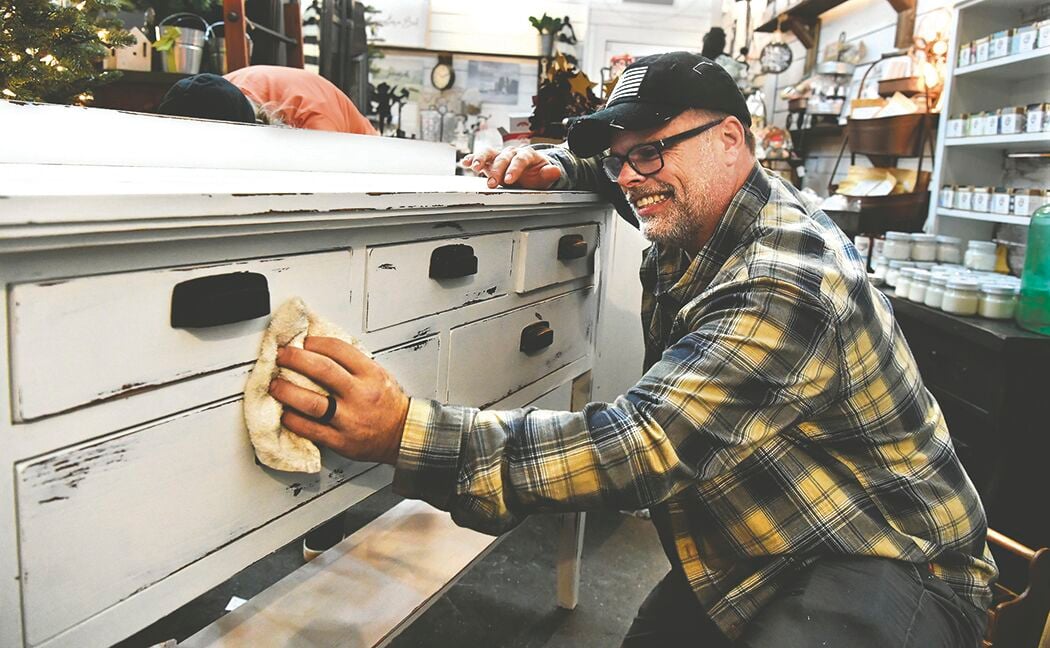 Visit the Facebook page of The Shiplap Shop & Coffee House in downtown Yelm, and you’ll find lots more than the typical banter for which the online social media site is famous.

You’ll find, for instance, information on holiday promotions and events, images showing some of the business’ wares — such as a case full of scrumptious-looking donuts or hamburgers from Stacks Burgers Food Truck, which stops at Shiplap — and photographs of employees promoting the coffee and goodies for which Shiplap has become known.

But you’ll also find a variety of in-house produced videos that you might not expect to find at a business that sells coffee and donuts. And that may be because Shiplap also specializes in modern, farmhouse-style furnishings that have become quite popular.

“A lot of our style and decor is similar to that of Chip and Joanna Gaines,” said Shiplap co-owner Gary Rurup, 52, who manages the shop’s vendors and home decor. The Gaineses are the hosts of the popular HGTV home-renovation show “Fixer Upper.”

The videos primarily highlight Rurup, who along with wife Kristin, and the other founding partners in the business — Vickie and Jeff Lemke, and Rurup’s sister Debbie Hilliker — have transferred the Shiplap website into a unique pit stop on the Information Superhighway.

For instance, for about the past 30 weeks Rurup and Hilliker have produced a 90-minute or so live Facebook show called Shiplap Shop Friday Night Live, which now runs every other Friday. In the videos, the brother and sister hosts banter and tease each other as they introduce to viewers about 150 different items in the store. Viewers comment and reserve the items they want — at a discount from in-store prices — and then visit the store the next day or two and pick up the items they reserved.

Behind the scenes as the stars banter away online, another eight Shiplap staff people scurry around the store pulling merchandise that people have reserved to purchase.

“It really does take a strong team to pull off the Friday Night Live events,” Rurup said.

And it’s taken a strong team to keep Shiplap in shipshape through the COVID-19 pandemic. When the virus hit in March, the business was forced to discontinue in-house dining and reorganize its interior to accommodate the required changes. Before COVID-19, Shiplap could seat 32 people inside, but that’s limited to six now.

The Friday Night videos have helped keep many more customers up to date on the shop’s offerings. Rurup estimates that about 250 people watch the Friday videos live and another 10,000 or so watch it as a replay after the event.

“The videos were my way of selling merchandise through Facebook Live, and it really drives a lot of traffic for us,” Rurup explained last week. “It was a new option for us to increase our customer base and continue to be profitable.”

Shiplap’s video experiment has now gone beyond the four walls of the store — intriguing another Yelm business that has instituted its own Facebook Live selling events.

In September, the Yelm clothing and accessories store Between Sisters Boutique & Gifts began its own Facebook Live selling events and now offer them every two-to-three weeks.

Between Sisters — which opened on March 6 and was forced to close from March 21 to June due to the pandemic — had previously guest starred three times on Rurup’s Facebook Live shows, so owners Heidi Potter and her daughter-in-law Nanette Potter had a pretty good idea how to proceed on their own.

“Facebook Live has helped our sales a lot and helped people find out more about our store,” Heidi said last week.

Shiplap, though — which opened in April 2019 — and particularly Rurup, had earlier on become a shining beacon of hope for the Potters, who in early 2019 started thinking about opening a retail business of their own.

Heidi had previously owned a high-end women’s consignment shop from 2012 to 2015 in approximately the same location as Between Sisters is now, so she was business savvy, but didn’t want to do consignment anymore.

So they sought out Rurup — whom Nanette had met while managing a local coffee drive-through stand — for advice.

“Shiplap is our favorite store in town, and as Nanette and I began talking about a business, Gary basically became a mentor to us,” said Heidi, 58. “He inspired us and would give us his time and answer all of our questions.”

And these days, Rurup — who has lived in Yelm for 17 years — is helping answer other people’s questions regarding home renovation through another set of videos called “Shiplap Renovate.” The program has a decidedly personal touch.

In October, the Rurups sold their 4,400-square-foot Rurup Farm and moved into a 2,100-square-foot single-story ranch home “fixer-upper.” Through these new videos he’s been able to educate people on renovating their homes as he and his workmates demonstrate the processes on his own home.

To date, Rurup has produced 10 Shiplap Renovate videos that run from about 2 minutes to 7 minutes. So far, the episodes have included advice on furniture painting, craft projects such as wall art, baseboard heater installation, plumbing, shiplap wall siding, and others.

“The purpose of the videos is to motivate people to make transformations in their own homes and give them decorating and design ideas,” Rurup explained. “And this will hopefully drive them back into the Shiplap shop to purchase those items they have seen in the videos.”

Rurup added that all of the products used in the videos are available in the Shiplap store.

“We’re really excited about this branch of the business,” he said. “I honestly believe that anything we do we will have a following and be a success. We feel blessed and have seen an abundance of support in the community.”

And Rurup’s still supporting Heidi and Nanette Potter as the Between Sisters owners navigate the wildly unpredictable business climate of COVID-19. The Potters chat about things these days mostly in passing as Heidi visits Shiplap a few times a week to buy coffee.

“We just kind of share ideas with each other, and when things come up we ask what he does in these types of situations and he offers business insight,” Heidi said. “Our businesses complement each other, so we’re not in competition.”

And their Facebook Live events complement one another, also.