A digital rendering shows what the front of the new Southworth Elementary school could look like. BCRA artchitects showed this rendering to the Yelm Community Schools Board of Directors at their last regular meeting on Thursday, Oct. 24. In November, the board will be asked to approve schematic designs. 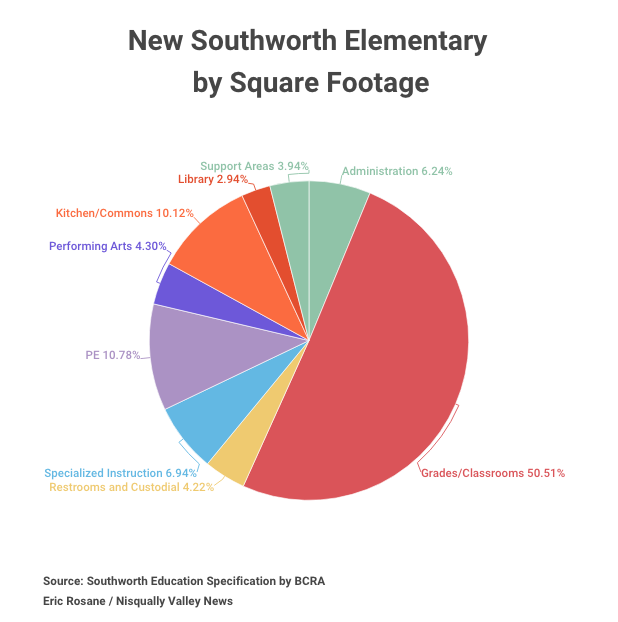 A birds-eye view shows the new Southworth Elementary will be built at the exactt same spot where the current building stands today.

The first external renderings and education specifications for the new Southworth Elementary were shown to the Yelm Community Schools Board of Directors during a regular meeting last week.

Education specifications provide the framework for proposed programs and spaces while leaving leeway for architectural design. Over the last few months, project manager Kasey Wyatt and BCRA Design, the firm that will design the new Southworth Elementary, have helped the school with leading focus groups and advisory groups to publish the 82-page document.

Designs from the education specification document and the renderings are not final, architect Heather Hocklander said during the Oct. 24 meeting. In December, BCRA and Forma Construction will come to the board for approval of schematic designs.

Southworth Elementary will be the second of two schools to be rebuilt over the next three years thanks to the passage of a $98.9 million bond by voters earlier this year. The rebuild process for Yelm Middle School will happen a year before Southworth.

Both projects are currently on time and on budget.

Like the proposed Yelm Middle School rebuild, the new Southworth Elementary will be a two-story building. The new building will be twice as big — about 62,500 square feet — as the current building and will serve up to about 550 students.

Superintendent Brian Wharton said he’s been thrilled with the design process so far and was very satisfied with the initial renderings, which he said reflects the town and Nisqually Indian Tribe’s history, and will be unique to serve their own population of students.

“Stylistically, they’re both very attractive buildings,” Wharton said. “There’s elegance with strong functionality in both of those buildings.”

“Your students are much younger at elementary school, so there are some safety precautions that are a little different than at a middle school,” Wyatt said. “One of the things unique to Southworth was the autism program.”

The new Southworth building will eventually host a district-wide special education/autism program that will serve 12 to 15 students.

Yelm School Board Gets First Look at Middle School Rebuild

The program is currently being developed at Ridgeline Middle School.

“We’re building that program there and it will be fully ready to go once Southworth is built,” Wharton said.

Wyatt said most concerns from the staff at Southworth came from the issue of being under one building. Many of the current building’s walkways are outside, which can be a safety concern and weather hazard for young students.

There are also 16 portable classrooms being used at Southworth. The construction of the new building would decommission 12 of those, Wyatt said.

Working within the site’s narrow space hasn’t been an easy task, Wyatt said. Due to the narrow 13 acres and drain field located on the site’s flank, Wyatt said there was little they could do to reposition the new building.

“That’s why the new building is going right where the old building is,” she said.

Wyatt said a review by Thurston County back in October turned up no sign of Mazama pocket gophers on either site.