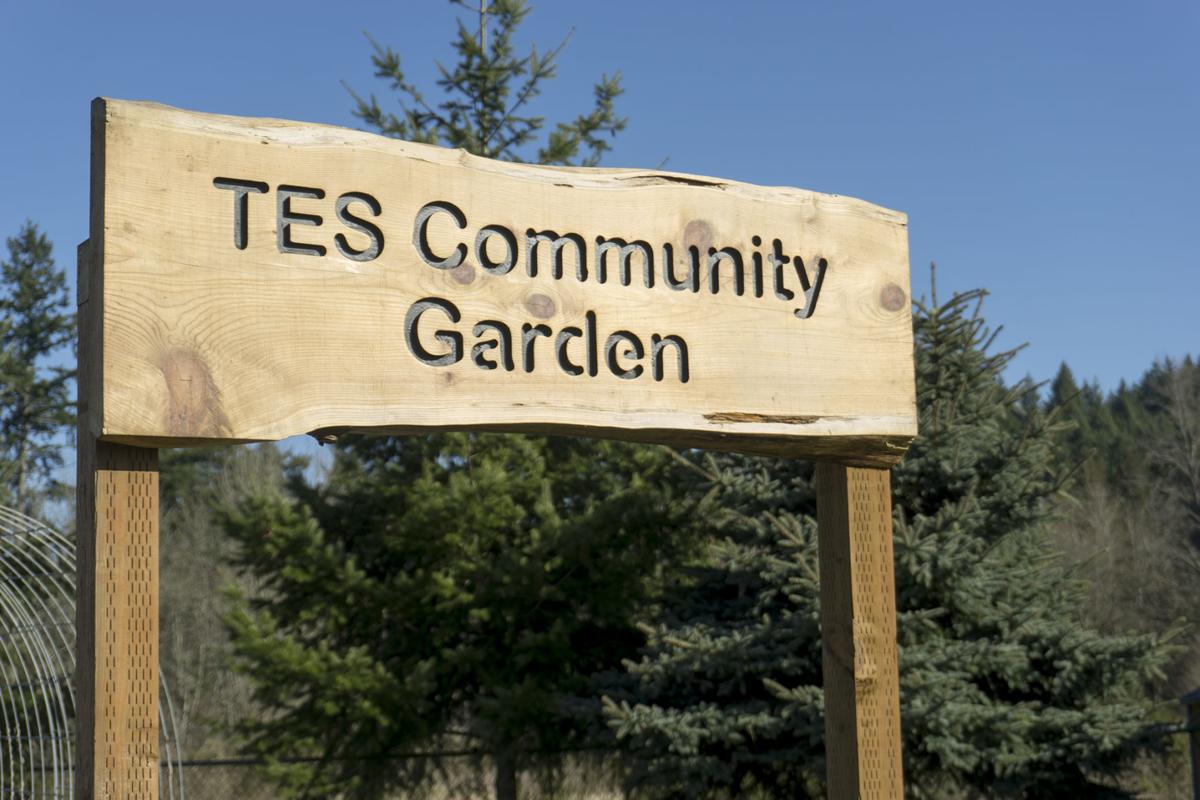 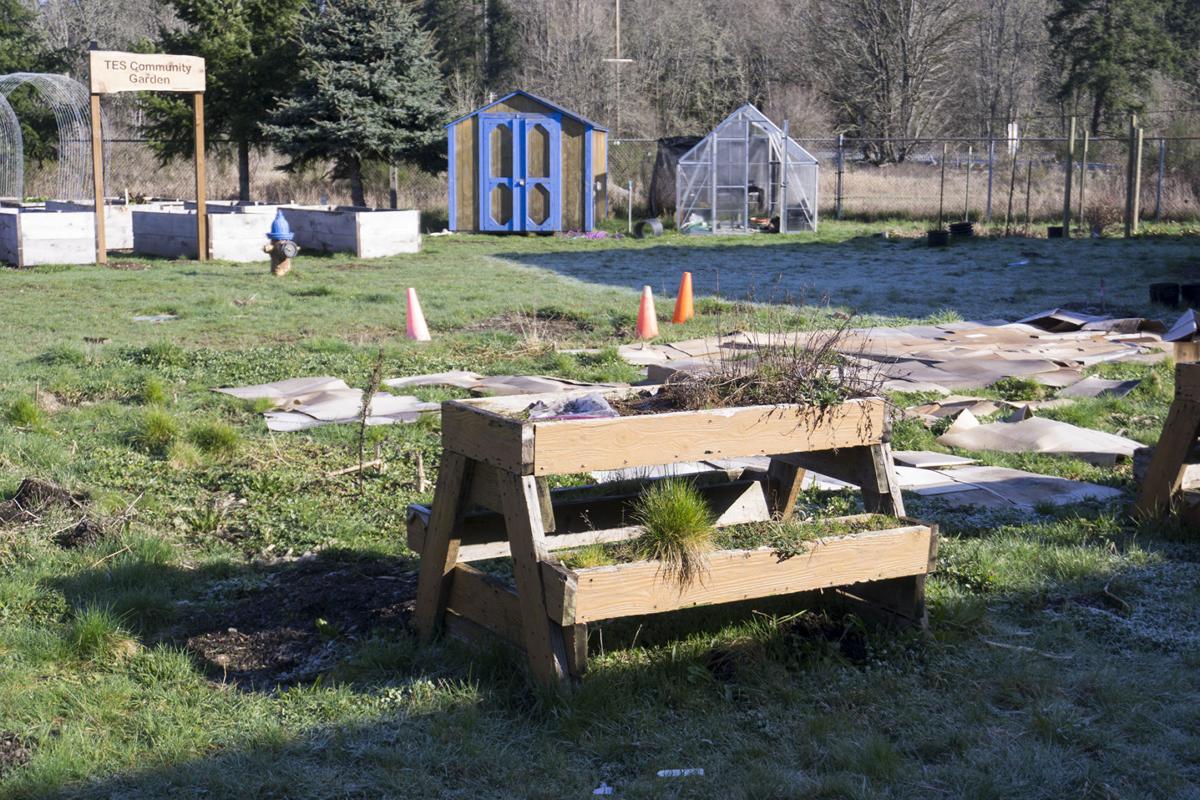 In January 2018, the Tenino Elementary School Community Garden was nothing more than an open field.

Now, with donations that have reached right around $9,000 from various donors — the latest of which from The Whole Kids Foundation for $3,000 — and a handmade sign by the SkillsUSA club at Tenino High School, an actual garden has taken shape.

Caitlin Craig-Mickel, teacher at Tenino Elementary and the garden’s coordinator, says that every addition made to the garden to date was made possible by the first grant. In 2018, she received $5,000 dollars from the Nisqually Indian Tribe.

“The major work from the 2018 (grant) to now has been everything you see,” Craig-Mickel said. “It was nothing before.”

The garden now features 12 garden beds, a shed for all of the garden’s tools and supplies, two arbors for growing beans and peas as well as a greenhouse. Water lines and an irrigation system have also since been added to keep the garden alive over the summer when school’s out.

Craig-Mickel added that families volunteer to help with the garden during the summer months.

“The irrigation piece has been a huge one for us,” Craig-Mickel said. “It took quite a bit of work and equipment to come out and get the lines put in, but it’s been huge in terms of having a garden that’s sustainable. It’s really helpful to have it getting consistently watered.”

With the grant from The Whole Kids Foundation, Craig-Mickel says she’s now focused on implementing buckets for compost, adding an additional arbor, a sink, and other measures to keep the garden organized.

Additionally, she hopes the added production of the garden will allow for a “take-what-you-need booth,” at the Tenino Farmers Market.

“(The goal) is to increasingly become more community oriented and inviting in people from the community to be able to come and harvest from the garden and participate in the garden as well,” Craig-Mickel said.

Suzanne Miller, Tenino Elementary secretary, helps find donations and funding for the garden. She also assists Craig-Mickel in identifying the garden’s immediate needs and developing the overall vision for its development. She added that gravel in between the garden beds is another item on the “wish list.”

Her passion for gardening is what led to her role with the Tenino Elementary Community Garden.

“It’s fun to watch how excited the kids are,” Miller said. “A lot of these kids, more than likely, don’t have (a garden). For them to see, actually, food in its form, it’s kind of important, because they probably don’t (otherwise). Most of their meals are here, breakfast and lunch, so for them to be able to go outside and get dirty, and kind of see exactly what food is supposed to look like and taste like I think is kind of important for them.”

One of those kids is fifth grader Felix Fairbanks. He was one of Craig-Mickel’s students and has been involved with the garden since its early, underdeveloped days. He says that he mainly waits until the summer to help with the garden, so he can book out “several weeks to man it completely.”

“Where I live, I would prefer to have a garden,” Fairbanks said. “Because I live in the woods, there’s not necessarily enough space, so it’s nice to be able to garden (at school), help out, plant, harvest and it was also a very nice thing to do. Everybody in the school can get produce from this, they don’t have to pay, work, do anything for that.”

Fairbanks has high hopes for the garden, adding that he’d like to see another row of bigger flower beds, a larger shed and greenhouse, as well as additional tools.

He’s also looking for easier access to the berries in the garden’s berry patch.

“Getting all the berries,” Fairbanks said. “Oh boy, I do not want to talk about trying to go in and get the berries.”

To Fairbanks, the growth of the garden is an example of the impact a community can have.

“It means that everybody works together,” Fairbanks said. “As (the sign) says, ‘community,’ community helped (the garden), people came with supplies and donations to get the equipment that we have, to build the beds.”

Craig-Mickel estimates that around 100 kids participate in the club every year. She adds it’s a great way for “kids who don’t always get a chance to be together at recess, or do those things, or don’t necessarily see themselves having a lot in common,” to come together and accomplish something.

According to Miller, the additional grant is only going to help student involvement.

“It’s fun,” Miller said. “With the second one and just having (The Whole Kids Foundation), you know, it’s like the recognize you and now you can report back and send them pictures and say ‘Okay, now we did this,’ and (Craig-Mickel’s) next vision of doing those composting bins, that’s big, because now that’s another whole process that these kids get to learn.

“It’s important to those foundations, too. They can say, ‘Oh my gosh, you’ve gone from nothing to now water lines, electricity,’ I mean, it’s all been put in.”