The Yelm City Council, Mayor JW Foster and city staff met with six candidates hoping to fill a council seat left vacant about a month ago by Cody Colt, who is now the city’s Public Works director.

The council was originally set to vote on Colt’s replacement during the regular meeting on Tuesday, May 26, but in a 5-1 vote chose to amend the agenda and defer the decision to a later date. A couple council members voiced approval on delaying the vote for more thorough consideration.

Council member Tracey Wood casted the sole dissenting vote, saying “I just think that this is something that is better we get done rather than wait, and I think that it’s important to remind everyone that it’s not our decision to elect council members — our job is to do the job that we were elected to do. The community will have the opportunity to vote on this seat as they do each and every seat … It sounds like we kind of want to kick it down the road.”

Under state law, non-partisan governing bodies hold the power to appoint a replacement if a seat becomes vacant.

The candidate the council chooses will serve through November 2021 and be paid a stipend of $800 a month for their service. Colt began his new position with the city in early May. The council has until late July to appoint his replacement.

Following the interviews, Foster said he was impressed, like many council members, with the diverse choice of candidates that applied for the seat. What was important, Foster said, was that all held a deep appreciation for the community and surrounding area.

“That came through on each one of the candidates’ answers,” Foster said. “I was impressed by some of the candidates myself and I think it'd be great to have a group like that vying for the position in November.”

With council vacancies in past years, Foster said it has been a challenge to get people to apply.

Two other candidates also reportedly submitted applications, but one was living outside city limits and the other application was rescinded prior to the meeting.

Crossman, a lifelong Yelmite who was interviewed first by the council, is owner of the PTL Hardwood Floors LLC. His business opened back in November, and he’s hoping to help make Yelm business friendly so that more residents keep their dollars circulating through the community.

A father of nine children, Crossman wrote in his application that one of his strengths is building connections with people and being upfront and honest. His priorities for the city’s future are business growth, community development and strengthening the city’s image.

Curry, who was originally appointed to fill Foster’s vacant council seat in 2016 and lost her bid for a second term to council member James Blair, said she’s hoping to bring experience to the position.

If appointed to the seat vacancy, she would bring the most amount of background knowledge to the council. Curry has been a champion for the Yelm Senior Center, and has also been a member of multiple organizations and jurisdictions, such as the Southeast Thurston Fire Authority board of commissioners and the Yelm Dollars for Scholars Committee.

Hess, who has run various campaigns for positions such as PUD commissioner and the cemetery district, said he’s hoping to bring expertise in budgeting from his time in the military to the position. He’s been a Yelm resident for about 16 years and served in the Army for 25 years.

Hess has also served as precinct committee officer for the local Republican Party of Thurston County. His three highest priorities for the city’s future are business growth, conservation of water, the repair of the treatment facility and the development of parks and recreational programs.

Hoadley, a Yelmite of 11 years and currently a grants manager with the Washington State Department of Commerce, said he feels strongly about bringing economic vitality back to the area and hopes to help rebuild the local economy in COVID-19.

In his work, Hoadley works with community action agencies and local governments across the state by providing federal and state community service block grant funds to help support programs, according to his application. He’s also worked in collaboration with their advisory and governing boards.

McGuire, a founding charter member of the Yelm Fraternal Order of Eagles and retired state employee having worked for 32 years in finance, said his priorities are with addressing traffic issues and bringing a revitalized sense of community back.

A Yelm resident of 40 years, McGuire’s three highest priorities for the city’s future are traffic, accountability of city funds, and the youth and community, according to his application.

Verbal, who currently works for the Department of Veteran Affairs and has lived in the area for about a year, said she’s a servant at heart with experience in community planning development with the U.S. Department of Housing and Urban Development.

She also holds two law degrees and teaches Sunday school and youth church at Grace Chapel on Joint Base Lewis-McChord. In the fall of 2019, Verbal also participated in the Yelm Police-sponsored citizen’s academy course.

Council members are hoping to discuss the candidates’ qualifications at an upcoming study session.

If the vacant Yelm City Council seat was subject to an election, who would you vote for?

The applications of each of the candidates are below: 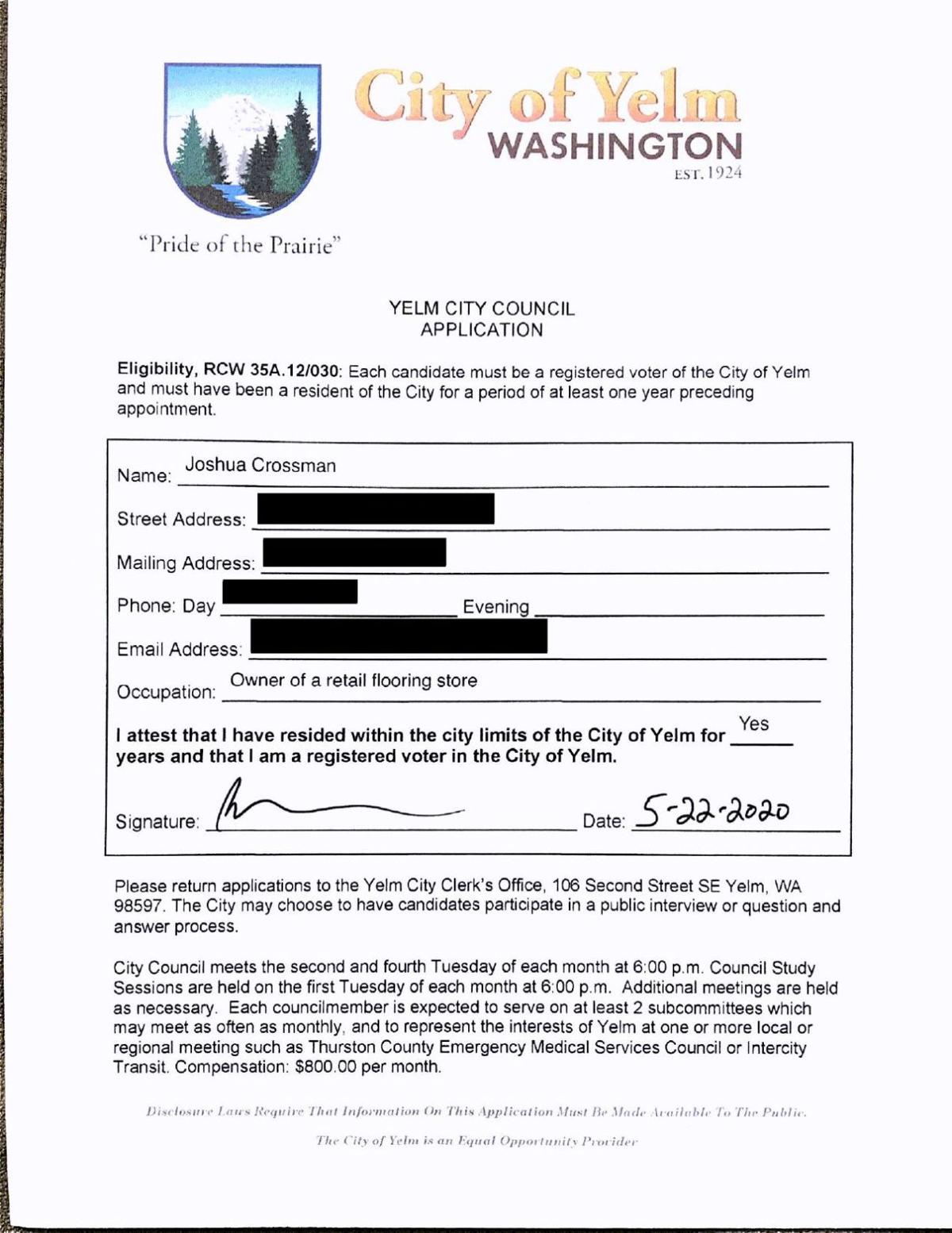 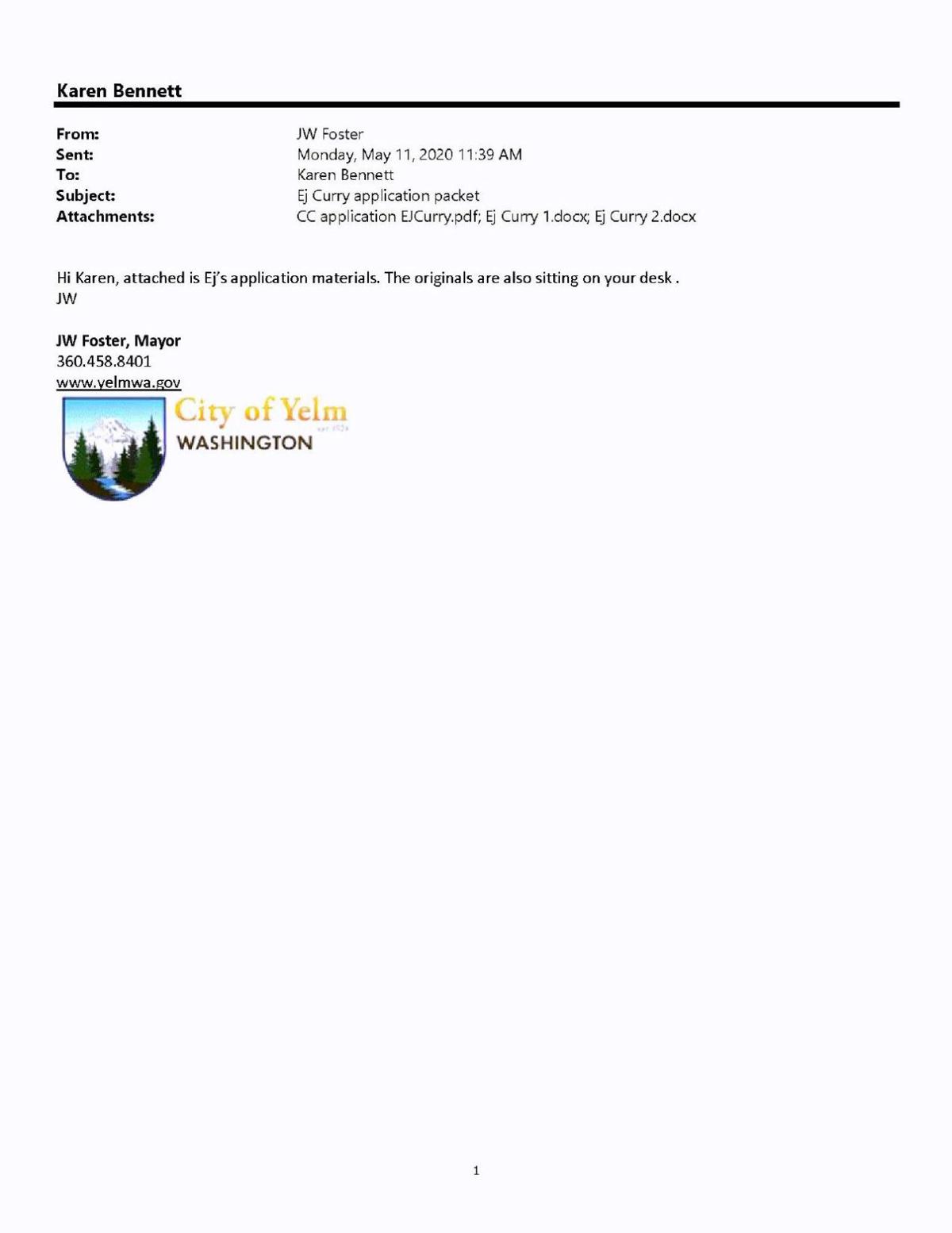 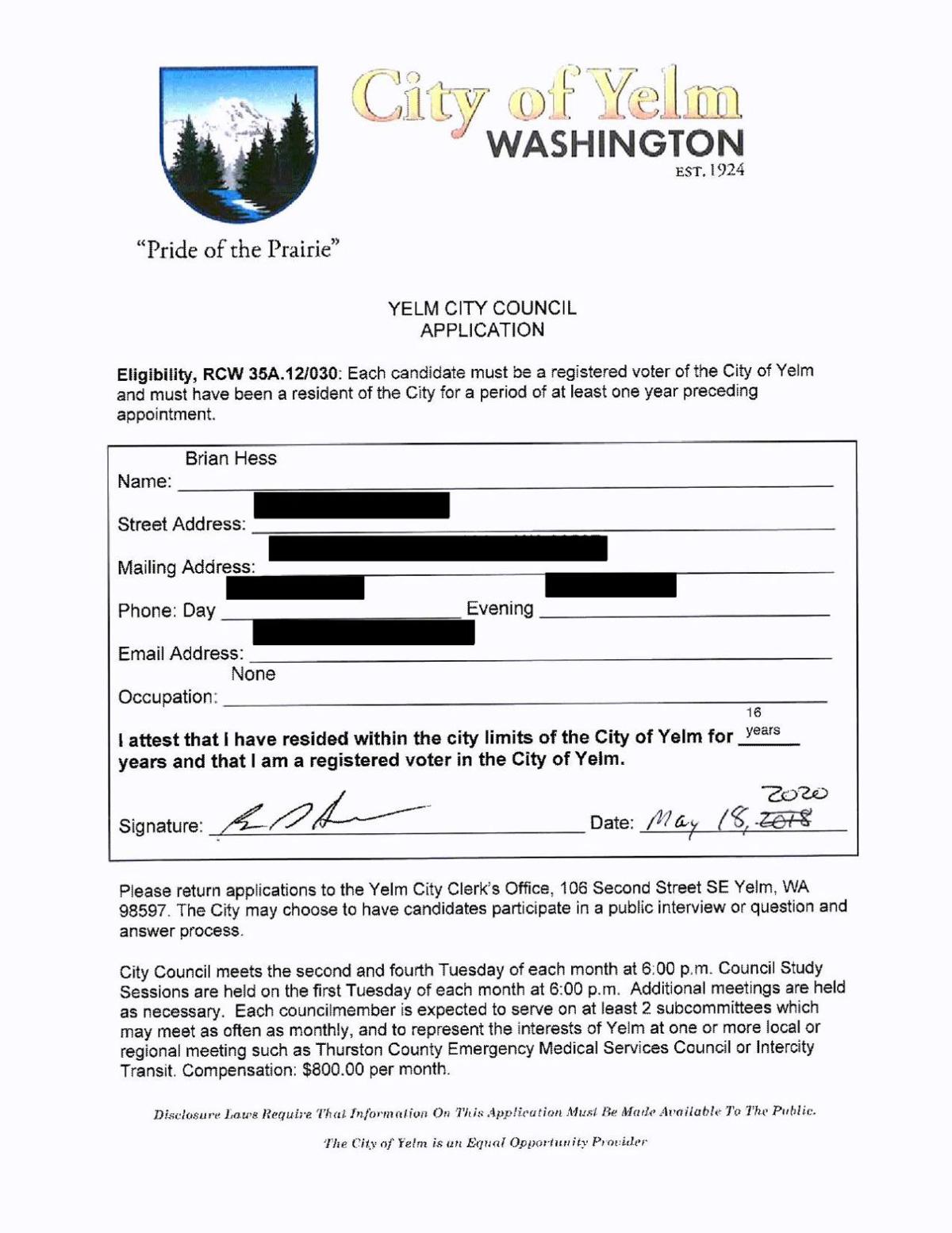 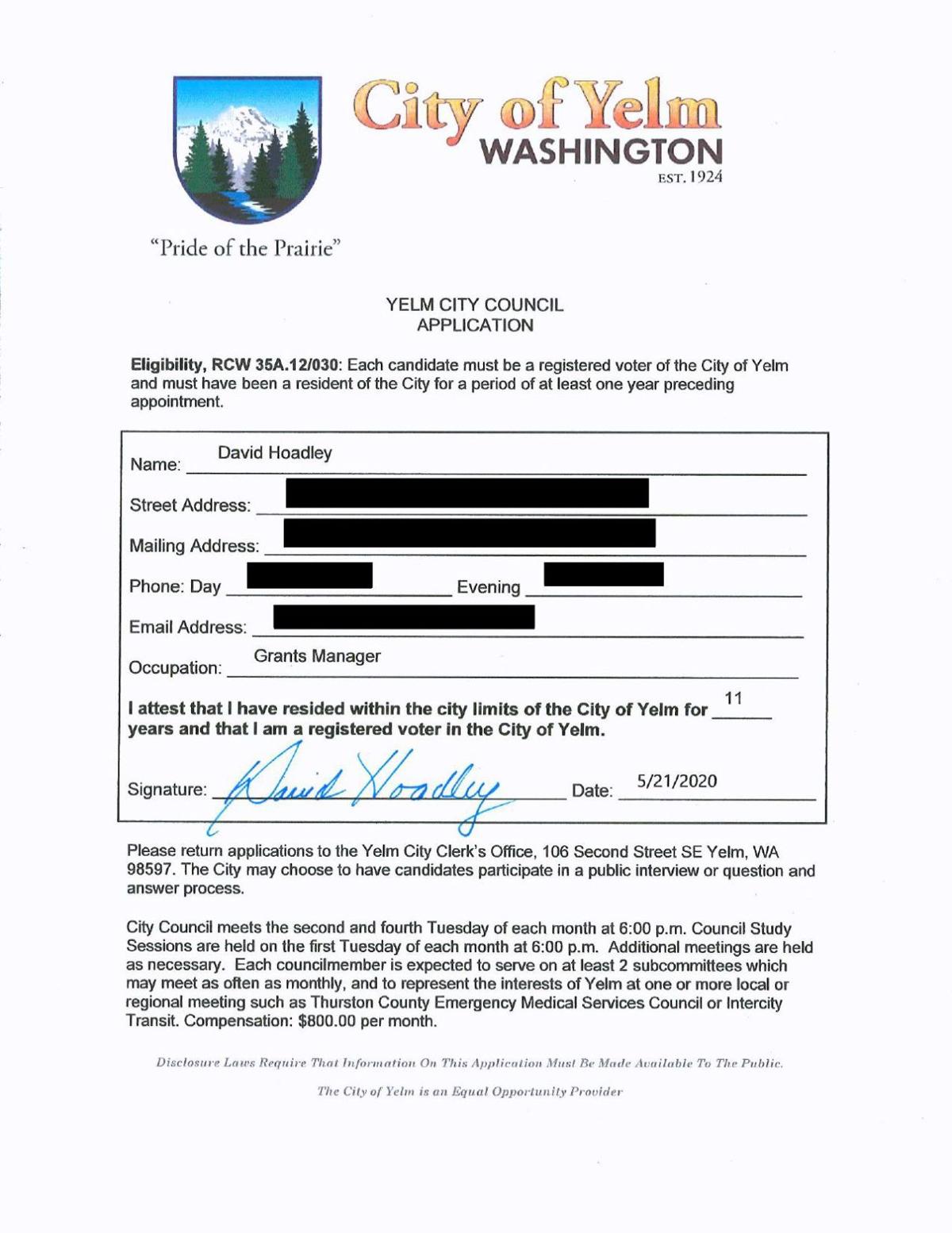 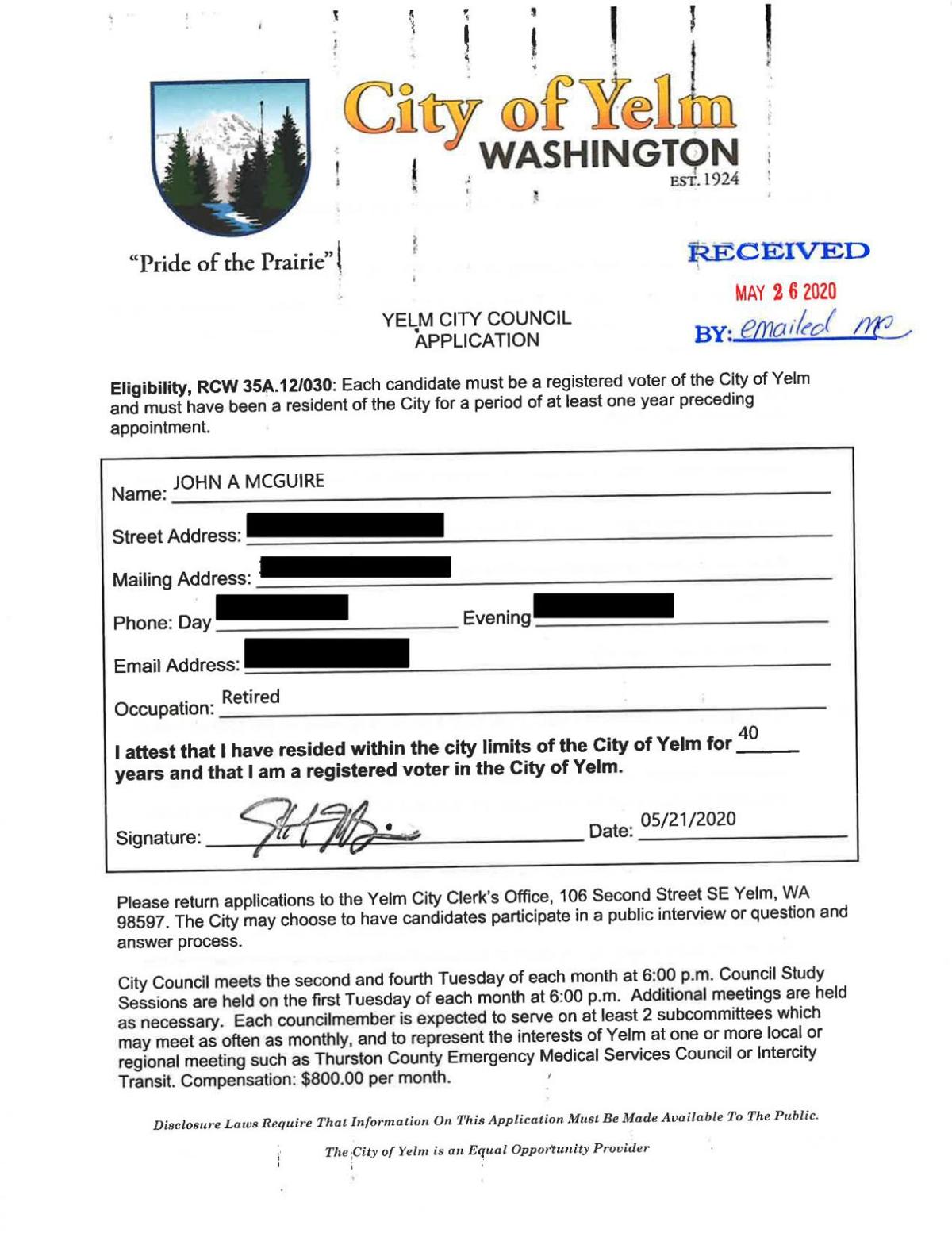 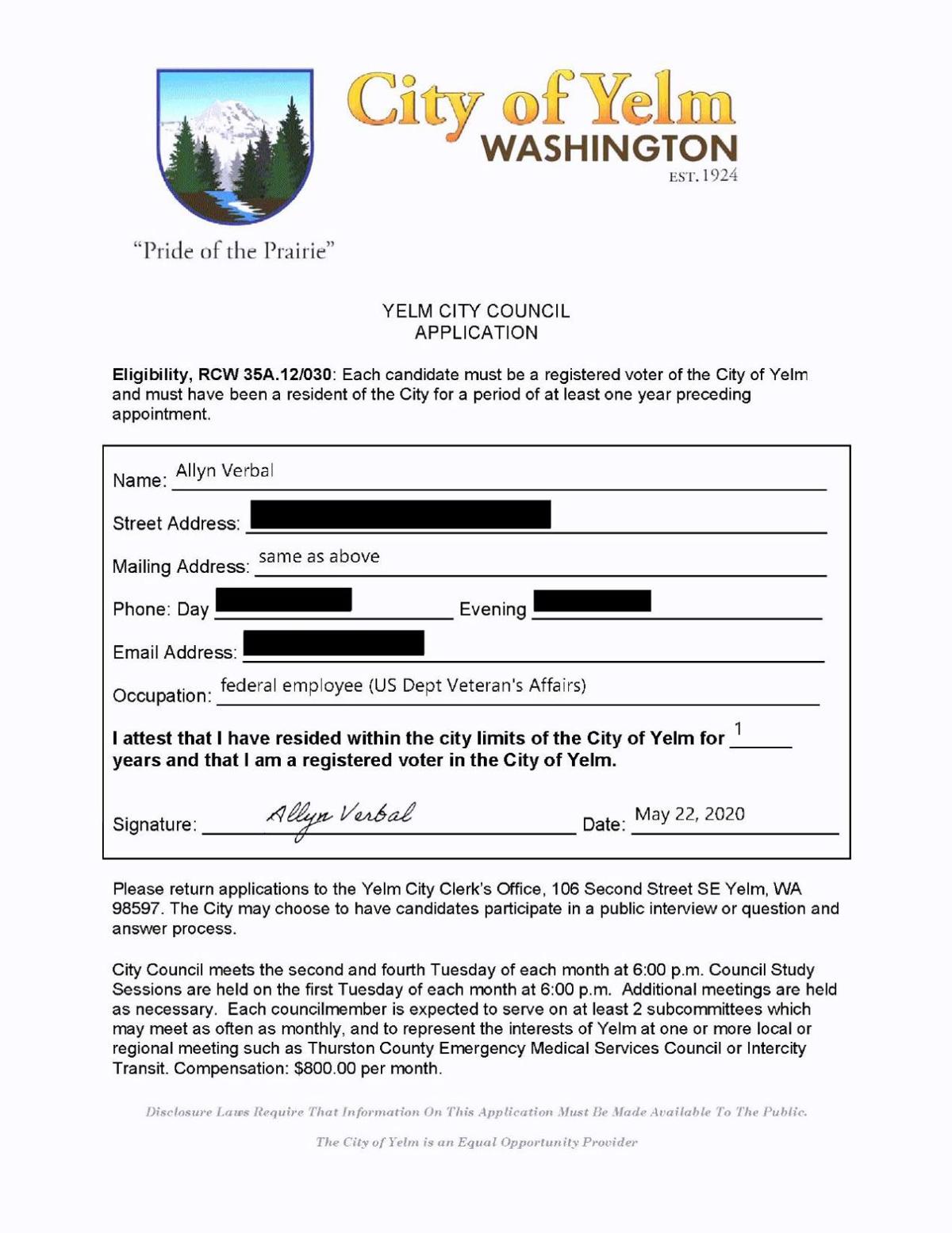