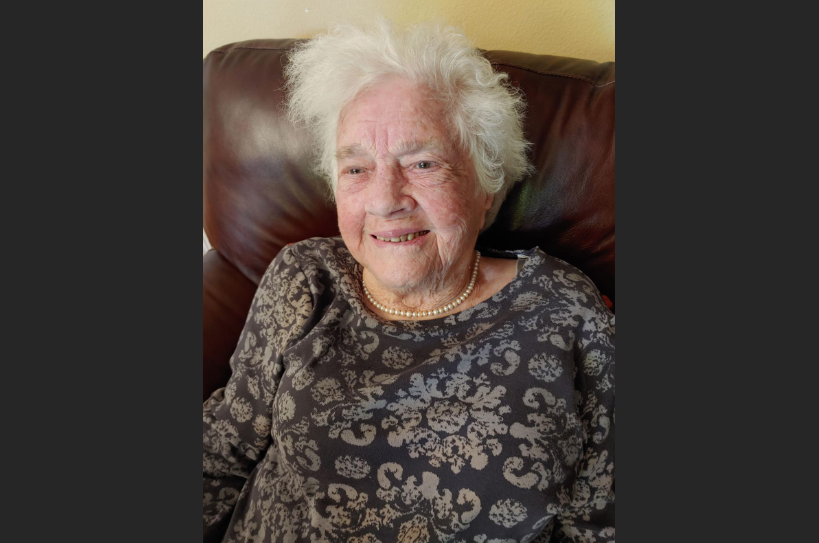 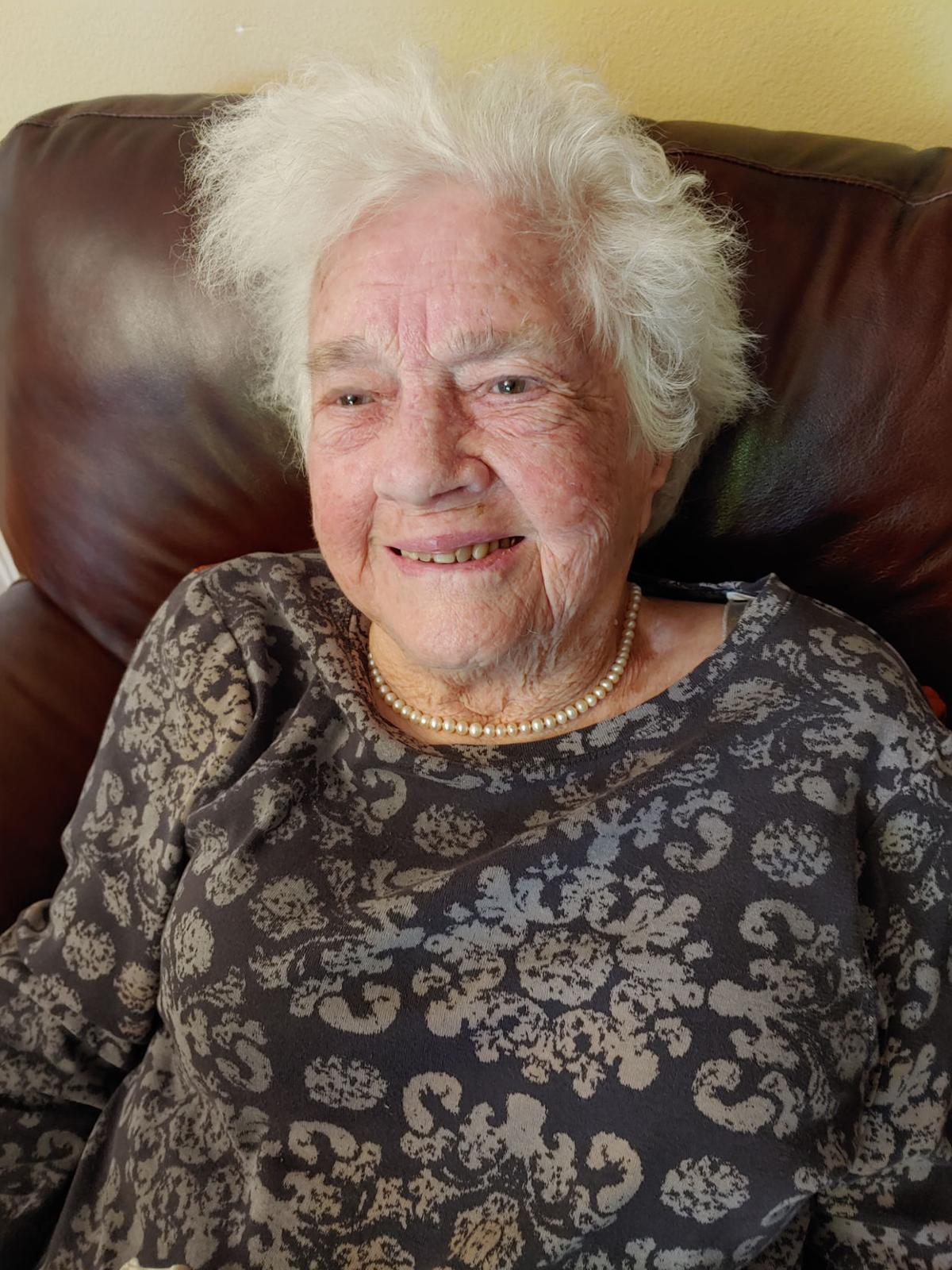 Eleven-year-old Lola Ritter had just finished washing and drying the dishes with her mother when she spotted her older brother on the front porch of their Tenino farmhouse beside a handsome young man.

“I took one look and I told Mother, ‘That is the man I’m going to marry.’ She hit me so hard!”

The memory remains vivid although it took place nearly a century ago.

“My mother said, ‘You think about going to school, not getting married.’”

Lola (Ritter) Bowen Stancil, a descendant of Centralia pioneers, will celebrate her 105th birthday Jan. 31. Her family is planning several small parties to celebrate. I interviewed Stancil nearly a decade ago while researching and writing the books, “Bucoda: The Little Town with a Million Memories” and “Chapters of Life in Bucoda,” both published in 2010. I interviewed her again in October.

Few people today recall falling victim to the Spanish influenza, a devastating flu virus that killed at least 20 million people worldwide between January 1918 and December 1920, but it struck Stancil when she was a child.

She also recalled her first visit to Fort Lewis in heavy rain.

“Mother was driving our buggy and she pulled in through the gate, tethered the horses, and then we saw our uncles before they left for World War I,” Stancil recalled.

As a child growing up on a 350-acre ranch in the Skookumchuck Valley, between Bucoda and Tenino, she attended the two-room Stony Point School with about 40 other students. She liked Mr. Buzzard, a tough instructor who taught her from fifth through eighth grades.

“He was a wonderful man, and he and his wife lived right across the fence from the school,” Stancil said.

Her parents raised cattle, chickens, and milk cows on their ranch beside the Skookumchuck River. Her father and older sister Verda milked the cows.

“One sister, she appointed herself as milkmaid,” Stancil said, adding, “We couldn’t touch the chickens. They were Mother’s.”

They grew a large garden, which they took turns weeding.

The family never went hungry during the Great Depression.

Stancil’s roots in the Pacific Northwest date back to 1845, when her great-great-grandparents Sidney S. and Nancy (Shaw) Ford crossed the Oregon Trail. They had started in New York and lived for a while in Michigan, where Stancil’s great-grandmother Elizabeth Anne “Lizzie” Ford was born.

According to family lore, four-year-old Lizzie’s shoes burned in a fire, forcing her to trudge barefoot along the arduous trail.

As a teenager in 1855, Lizzie married Joel Theodore Ticknor, 29, who also traveled west from New York in 1845 and built a place east of the Skookumchuck River near what later became Bucoda. They had 10 children, including Emma A. “Nettie” Ticknor, their fourth child, who was Stancil’s grandmother. The historic Ticknor School is named after the family.

In June 1885, Nettie married James Wesley Davis, and they had five children—three boys and two girls, including Lola’s mother, Clara Lenora, who went by “Nora” and married Lester Ritter of Silver Creek. A street in Tenino is named Ritter.

“She was strict as heck, but I loved her very much,” she said. “I was Mother’s fifth child, so Grandma didn’t have much time.”

One visit from her grandmother proved memorable after Stancil’s parents had slaughtered a pig. They wasted nothing so

Stancil’s mother, pregnant with her seventh and last child, was making a meat cheese from the pig’s head.

“Mother made head cheese, but she couldn’t gouge the eyes out,” Stancil recalled. “But Grandma Davis came and finished it. She didn’t have trouble doing nothing.”

Stancil didn’t like eating head cheese once she found out how it was made.

When she was 10, the family bought its first car, a used Ford, using money from a dozen turkeys her father raised and sold. The turkey eggs had been a gift from a man grateful for the care her sister Verda had taken of his horses when he left them tied to a fence.

The Ritters lived near Nora’s parents and eventually moved onto the Davis homestead to raise their family. It was on that porch where Stancil caught the first glimpse of the young man with brown hair and hazel eyes.

“I thought he was the handsomest thing that ever lived.”

But Reece Bowen was nearly 18, while she was seven years younger. His mother had died when he was born, so he was raised in Toledo by his aunt, Daisy (Bowen) Taylor and her husband, Dick. He left school when he was 13 to work in the woods. He pitched a tent on the Ritter place and lived and worked with Lola’s older brother, Kenneth.

The Ritter family enjoyed attending shows in Tenino, and Bowen joined them.

Finally, when she was 14, they dated.

“We took Mother and went to dances or shows, in Tenino or Centralia, if we were lucky,” she said. They also attended ball games together.

Bowen told her he knew how old she was, but he’d wait for her, which he did … for a while.

She started her freshman year at Tenino High School but didn’t enjoy it.

“I chased him a little bit,” Stancil admitted with a laugh.

On Jan. 21, 1931, Bowen’s 23rd birthday and a little over a week before her 16th, they married at the Lewis County Courthouse in Chehalis. Her mother and Aunt Stella Anderson witnessed the ceremony before a justice of the peace.

The couple spent the night in a Chehalis hotel. She didn’t remember which one.

Julie McDonald, a personal historian from Toledo, will share more about Lola (Ritter) Bowen Stancil’s life in next week’s column. She can be reached at chaptersoflife1999@gmail.com.

Note: This is the second in a two-part series on a local woman celebrating her 105th birthday. See the first installment at the link below.