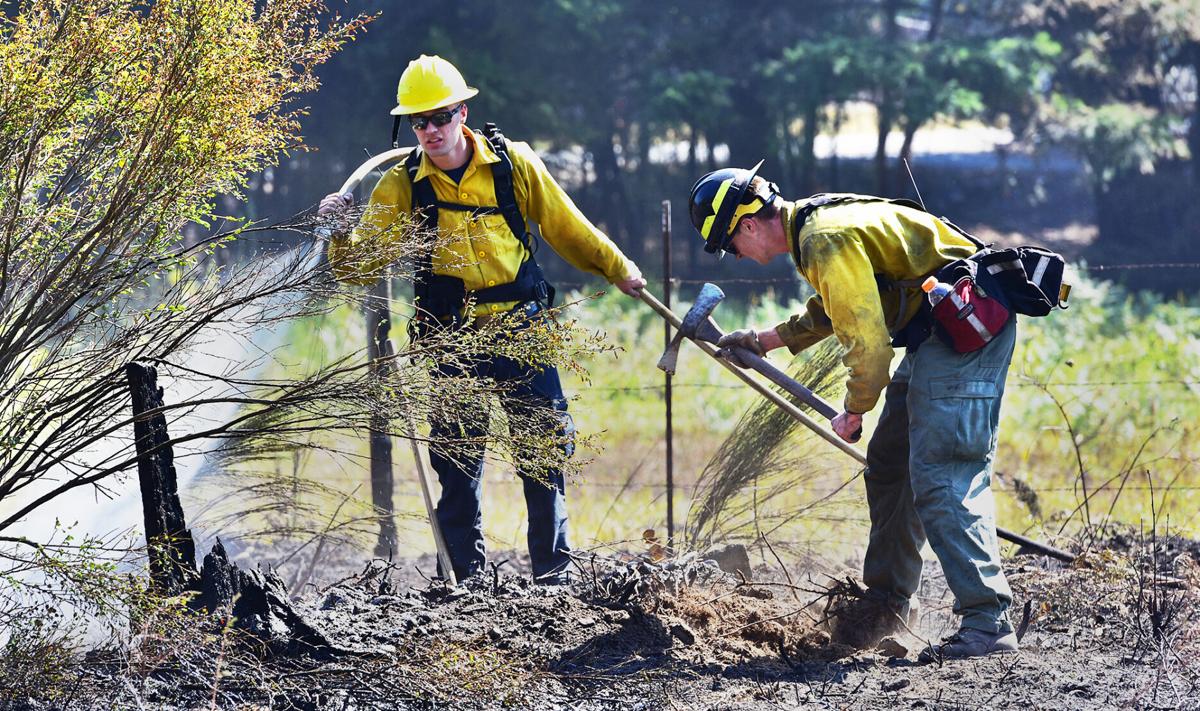 Firefighters mop up on Wednesday, Sept. 9, in Graham after eight homes were destroyed in the town Monday night when multiple brush fires broke out and were fanned by blustery winds. 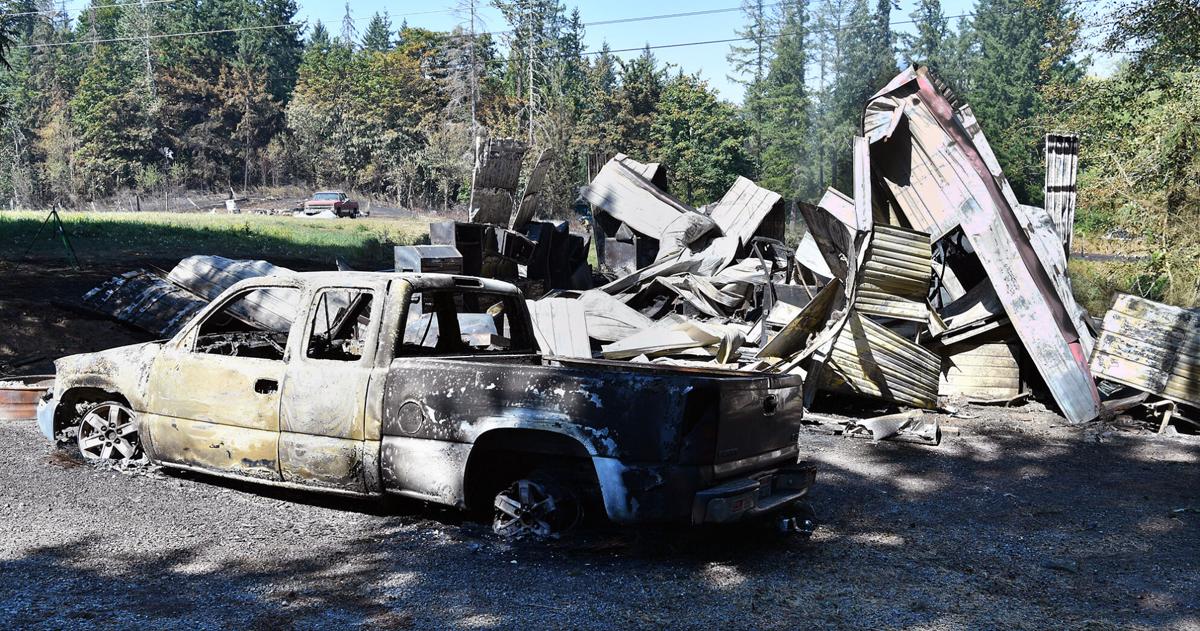 A pickup truck and structure were destroyed in Graham Monday night along with other homes when multiple brush fires broke out and were fanned by blustery winds. 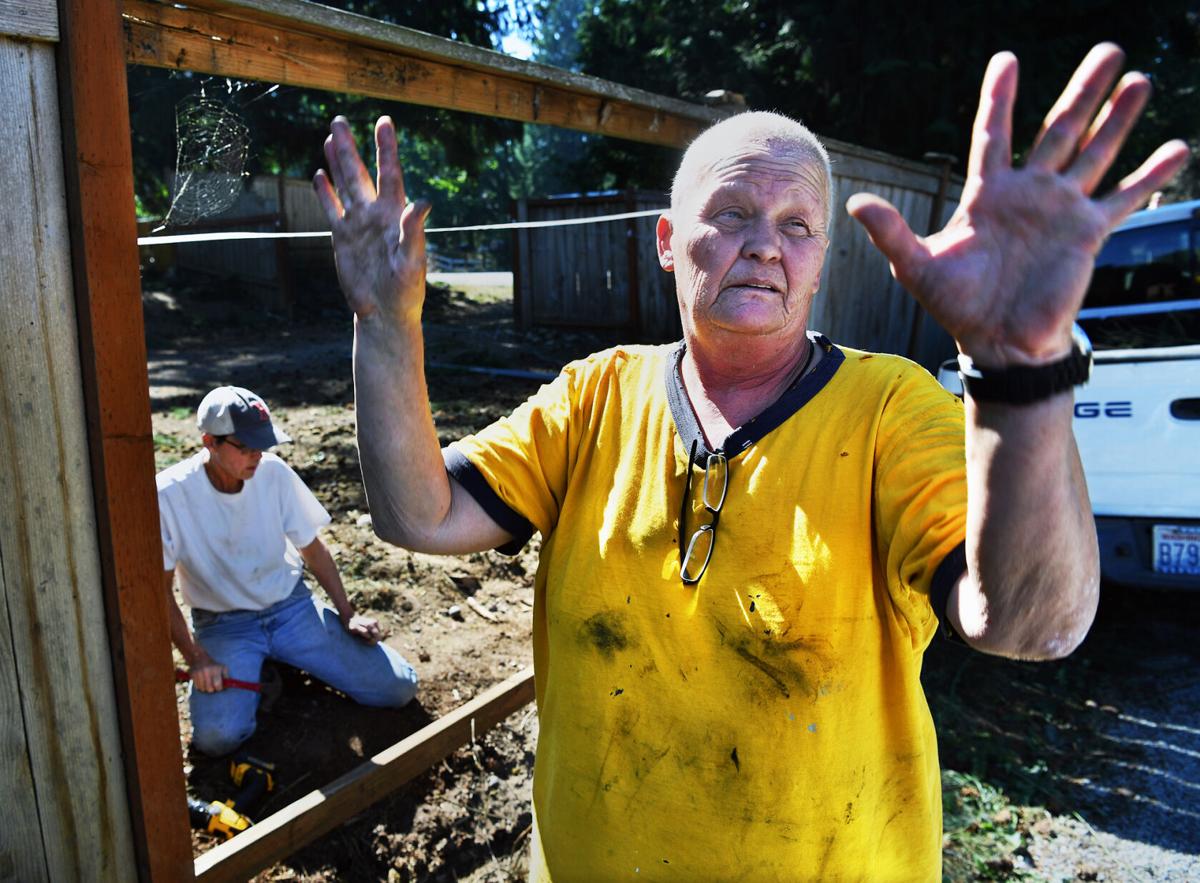 Toni Vroman, 64, who lives on 245th Street in Graham, barely escaped a fire that destroyed eight homes in the town Monday night when multiple brush fires broke out and were fanned by blustery winds. Her next door neighbor's structure was destroyed and flames from it licked her wooden fence, but somehow went no farther. In the background on Wednesday, Sept. 9, is Vroman's friend Doreen Lucia, 59, from Spanaway who came to Graham to help Vroman repair her fence.

Firefighters on Wednesday were continuing to work on a fire that was sparked Labor Day evening just off 154th Avenue east of Graham and burned several homes.

The blaze has since been put out, though hotspots remain.

In a Wednesday update, Graham Fire and Rescue Chief Pat Dale said the fire that destroyed at least five homes, 10 outbuildings and burned more than 100 acres started after a tree fell on a nearby power line at around 10 p.m.

The fire quickly spread due to the high winds, low humidity and dry brush.

“Graham Fire and Rescue deployed our full fire force. We were quickly overwhelmed with the rapidly spreading fire, which actually jumped this street that I’m standing on,” he said.

After arriving at the scene, his force then requested mutual aid and eventually state mobilization.

The area remains in a level 3 evacuation order as state mobilization and Graham Fire remove tall trees that were compromised due to the fire.

“It’s amazing what goes through your head,” said Toni Vroman, 64, a resident along 154th Avenue whose house was spared by the erratic flames. “You think you have control over your life, and you just don’t. You just don’t know.”

This fire was just one of many that erupted this week throughout Western Washington.

In a Tuesday press conference, Gov. Jay Inslee said that a total 330,000 acres had burned over the previous 24 hours, which was greater than any of the previous dozen fire seasons in the state.

As of Wednesday, many regional fire resources were moved to a blaze burning near Bonney Lake. According to KIRO 7 News, the fire so far has burned about 800 acres with many evacuations in the area issued.

At a site visit to the Bonney Lake fire Wednesday, Inslee addressed the press and met with first responders.

“This is an extraordinary series of events we have suffered. They’re the result of catastrophically dangerous climatic systems which have left us exposed to these horrendous fires,” Inslee said. “The low humidity, the high temperatures, the winds have all combined to stymie some of the most aggressive firefighting activities of our courageous firefighters and security personnel.”

Though four buildings have been destroyed by the Bonney Lake fire, no deaths have been reported.

“It’s very easy to get these fires going and it only takes one spark to get one fire going with the dry grass and shrubs in accommodation with the heavy winds,” South Pierce Fire and Rescue Chief Todd Wernet said by phone.

South Pierce was one of the many departments that quickly responded to the fire Monday night in Graham. They had a brush unit, two tender units and an engine at the site for more than 20 hours.

First responders were still working on evacuation as the fire picked up into that first night.

“It was actually pretty hairy,” Wernet said, adding that he was impressed with how Graham Fire managed the scene.

Much of the Puget Sound region has been under a Red Flag Warning issued by the National Weather Service due to the hot weather and dry conditions. The warning was issued through Thursday.