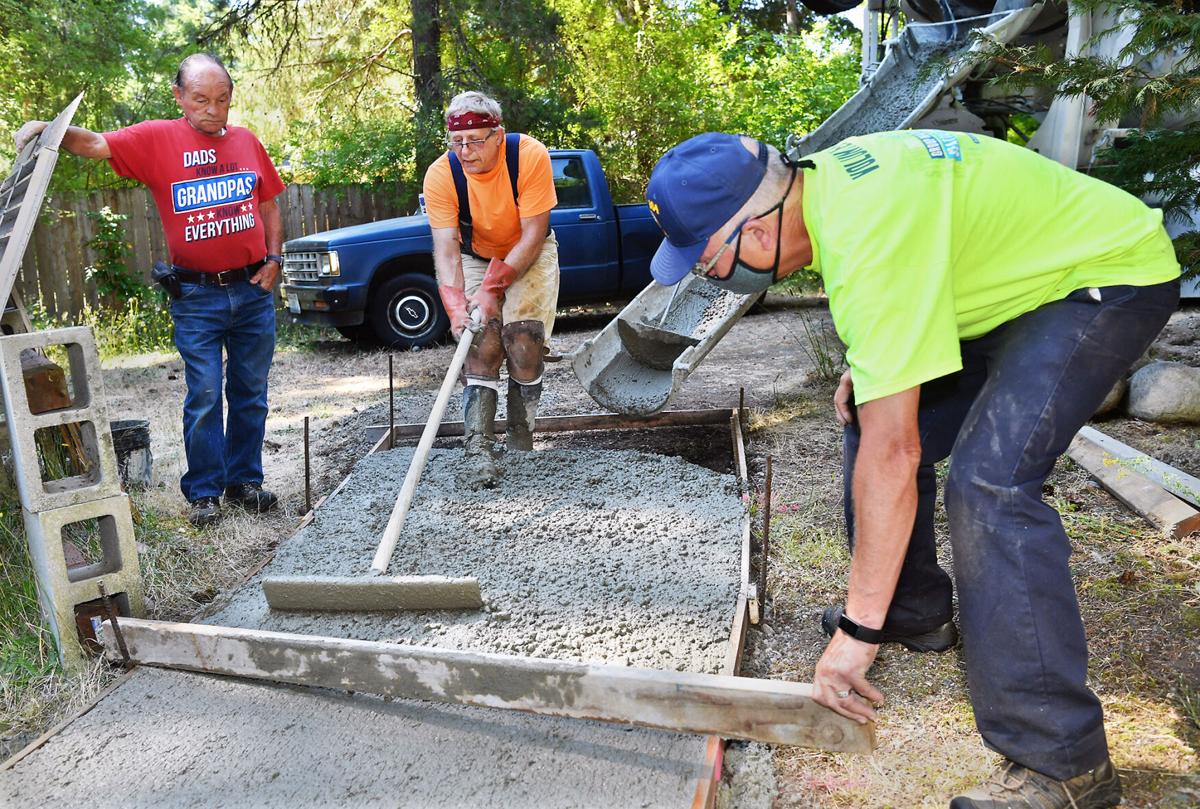 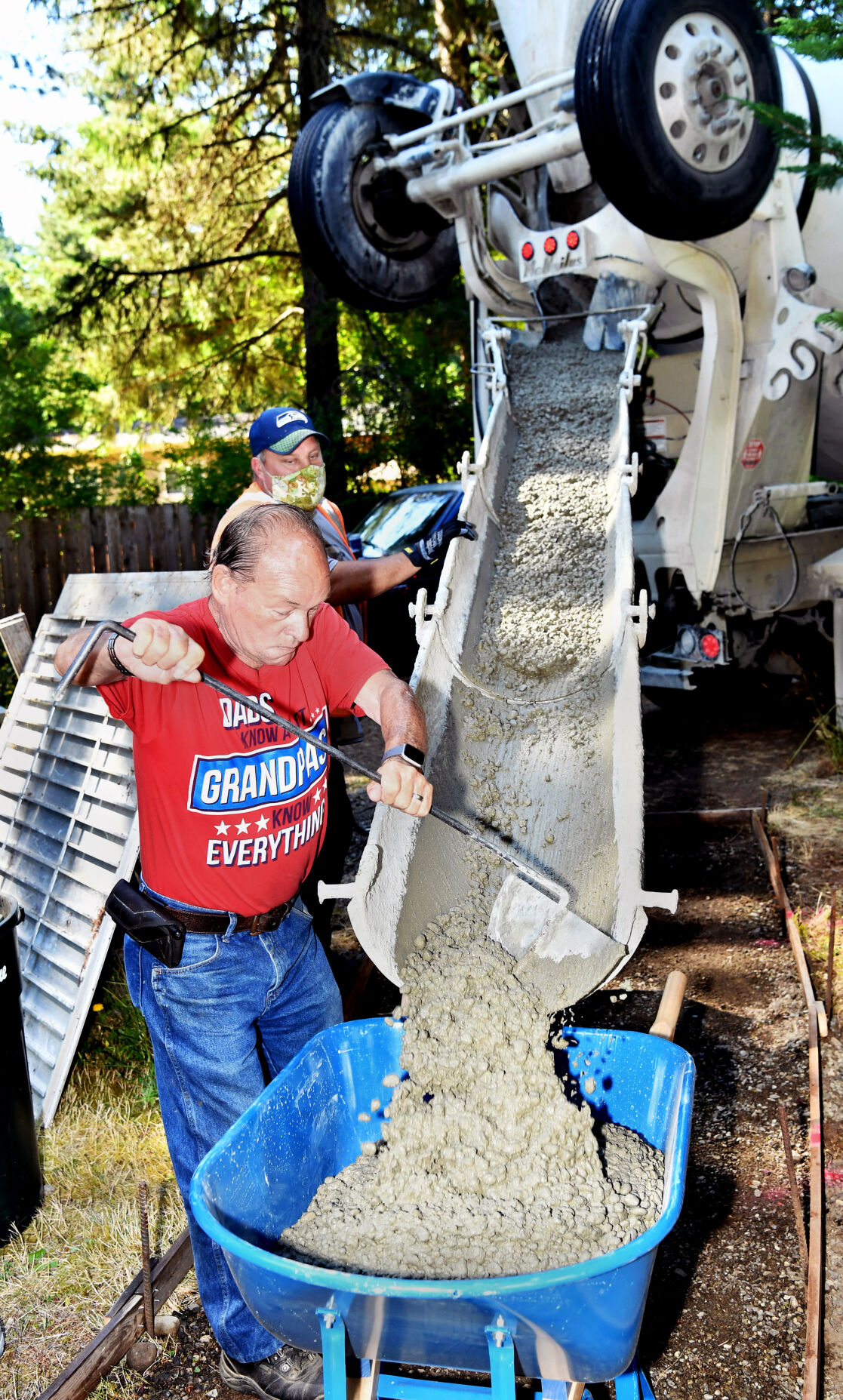 McKenna resident Butch Logan, 76, second vice-commander at American Legion Post 164 in Yelm, helps push wet concrete into a wheel barrow on Monday, July 27, that would be used to pave a walkway for disabled Army veteran Darren Bertels at his house in Yelm. 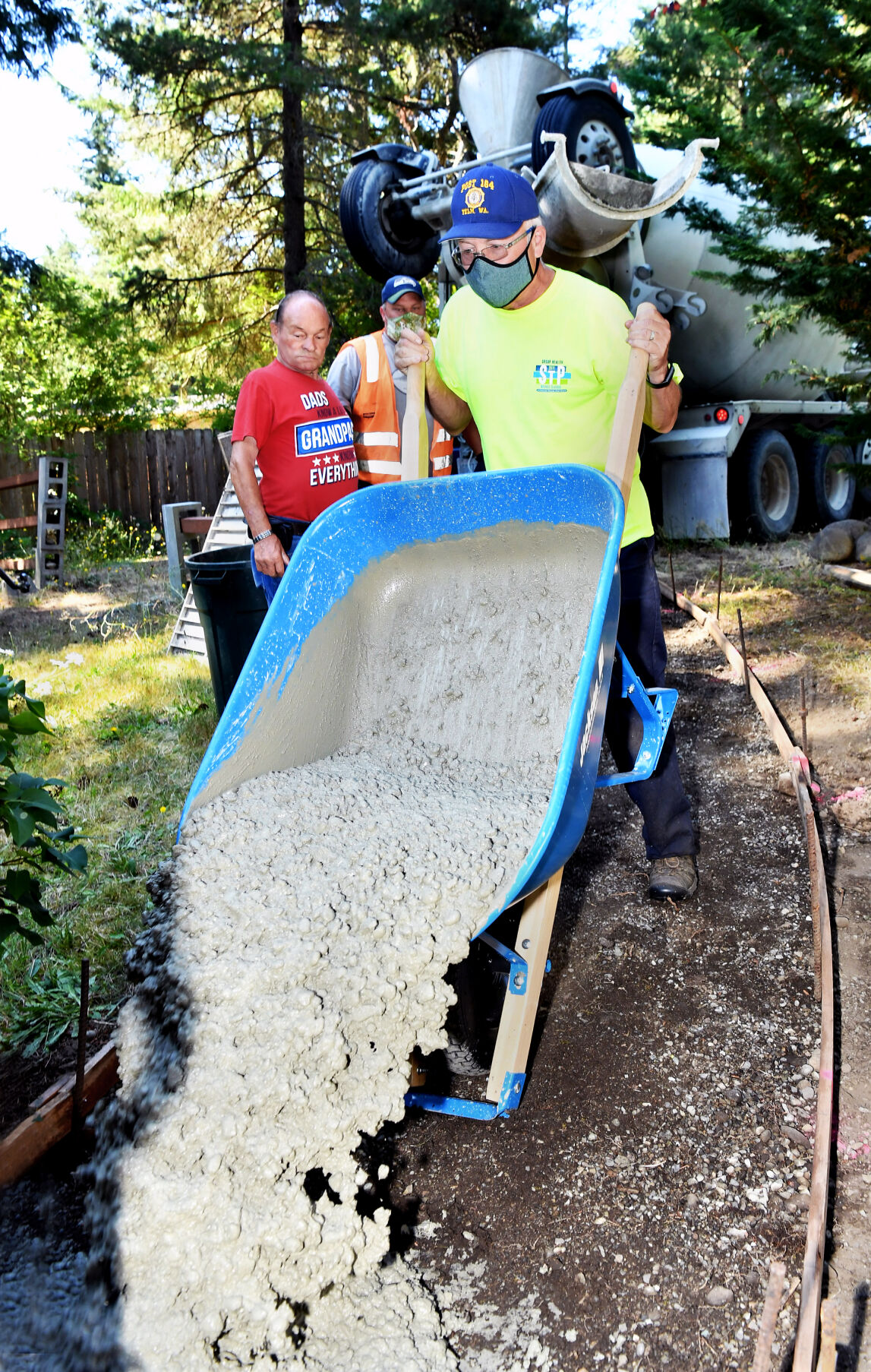 Yelm resident Allan Ohlsen, 68, post commander at American Legion Post 164 in Yelm, unloads wet concrete from a wheel barrow on Monday, July 27, that would be used to pave a walkway for disabled Army veteran Darren Bertels at his house in Yelm. 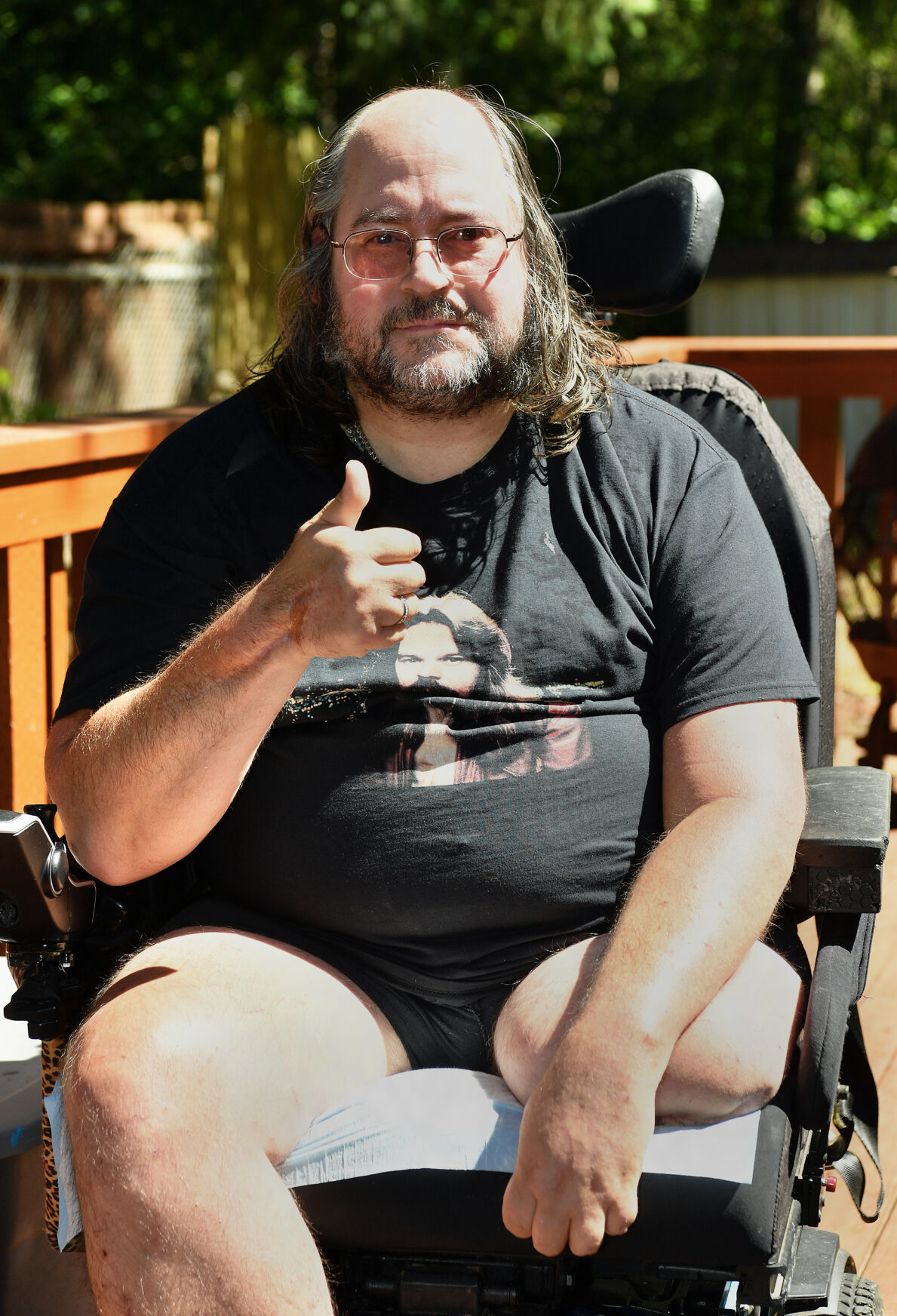 Disabled U.S. Army veteran Darren Bertels, 50, was pleased as he watched friends and fellow American Legion Post 164 buddies build a concrete walkway for him at his Yelm house on Monday, July 27.

It was Mark Hergert’s first job of the week, and it couldn’t have been more special.

A supervisor at Team Concrete Construction, Hergert, alongside a small number of other volunteers from local veterans organizations, helped pour and shape a 32-foot-long, 4-foot-wide concrete path for retired U.S. Army veteran Darren Bertels, 50, of Yelm.

“It’s not every day someone does $3,000 of work for you,” Bertels said on a sweltering Monday morning, sitting in a wheelchair on his front porch. “I totally appreciate it.”

The project was completed thanks to a collaboration between five organizations: the American Legion Post 164 in Yelm, A Hero’s Promise, Liberty Disaster Relief Service, Team Concrete, and Veterans Lending Group.

Bertels, who served for about eight years in the U.S. Army and Reserves from 1988 to 1996, contracted a flesh-eating bacteria through a leg gash while on a tactical operation on the Korean border.

A few years after his retirement, his leg was amputated due to the injury he sustained.

The Department of Veterans Affairs installed a metal ramp on his front porch shortly after he purchased his house on Cornus Court in Yelm back in 2006. But even with the new addition, getting around past his yard in his motorized wheelchair proved to be a challenge.

The yard he traveled in quickly turned to mud during the wet part of the months. Once the problem got worse, his neighbor suggested he install shingles on top of rocks for a make-shift path.

“It constantly moved around, but it got me there … I wasn’t stuck in the mud,” he said.

But even that wore out over time.

Eventually, Bertels applied for a home adaptation grant with the Department of Veterans Affairs. But after it was denied, likely due to the economic slowdown caused by the coronavirus recession, Bertels came to a dead end.

“He didn’t even want to ask about this. One of his neighbors asked for this,” said Clay Williams, 1st vice commander at American Legion and founder of nonprofit A Hero’s Promise. Williams has known Bertels for more than a year now through the Legion.

Bertels, a member of the local Legion, was frequently missing breakfast and other Legion meetings, Williams said. That’s when they decided to step into action.

“This is what keeps me alive, to be honest,” Williams said. “In doing so, my family’s grown and we’ve helped hundreds and hundreds of people.”

“As a military officer, It’s ingrained in us to check in our troops,” he said. “My stakeholders are really in the community.”

Though the concrete was still wet at around noon on Monday, Bertels looked at the new addition to his home with deep appreciation.

“It’s going to change things drastically,” Bertels said of navigating his yard. “It’s going to increase my freedom by 95 percent. I’m gonna be able to get out more … It’s changed my attitude.”

Work on the house is not over, though. A Hero’s Promise, Liberty Disaster and the American Legion plan on building a better backdoor patio and new ramp for the U.S. Army veteran on the other side of his house.