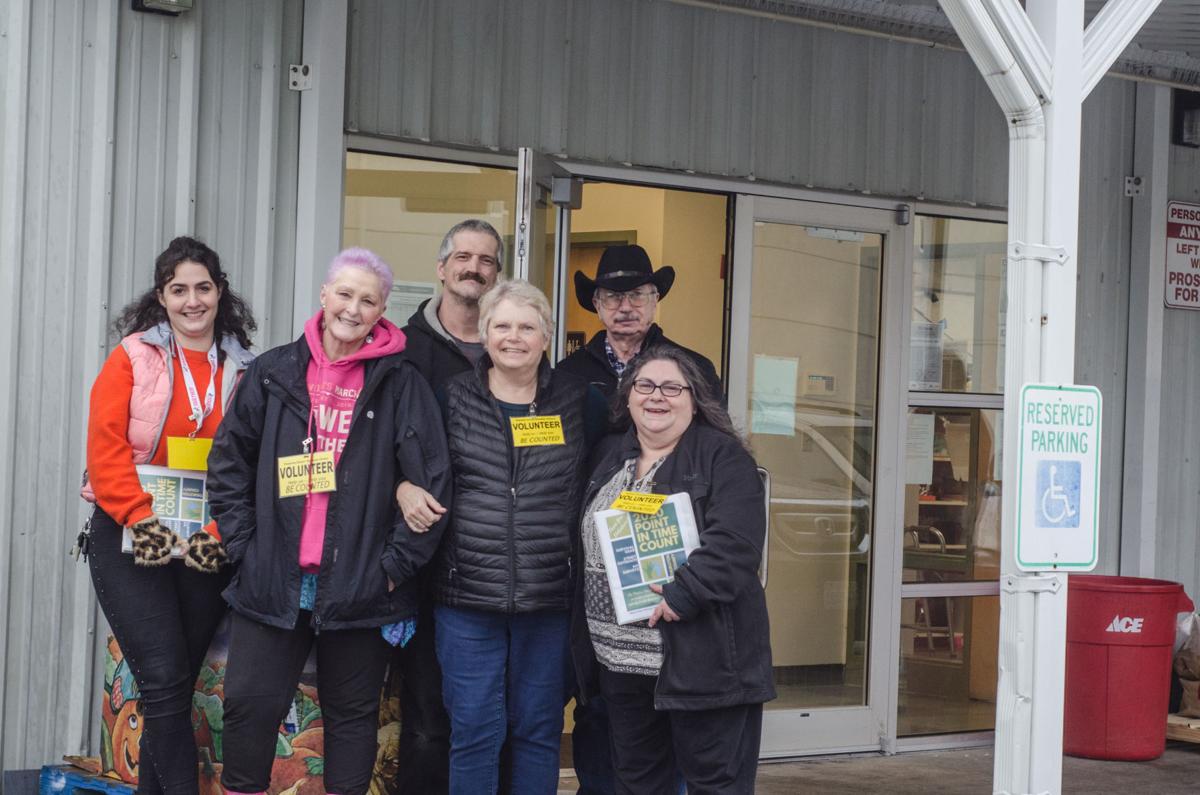 Six volunteers of the annual Yelm Homeless Point in Time census pose for a photo Thursday afternoon outside of the Yelm food bank. Organizers say they’re making increased efforts to count more vulnerable portions of the homeless population, which includes children and women. Last year, the census counted 31 around the Yelm area. 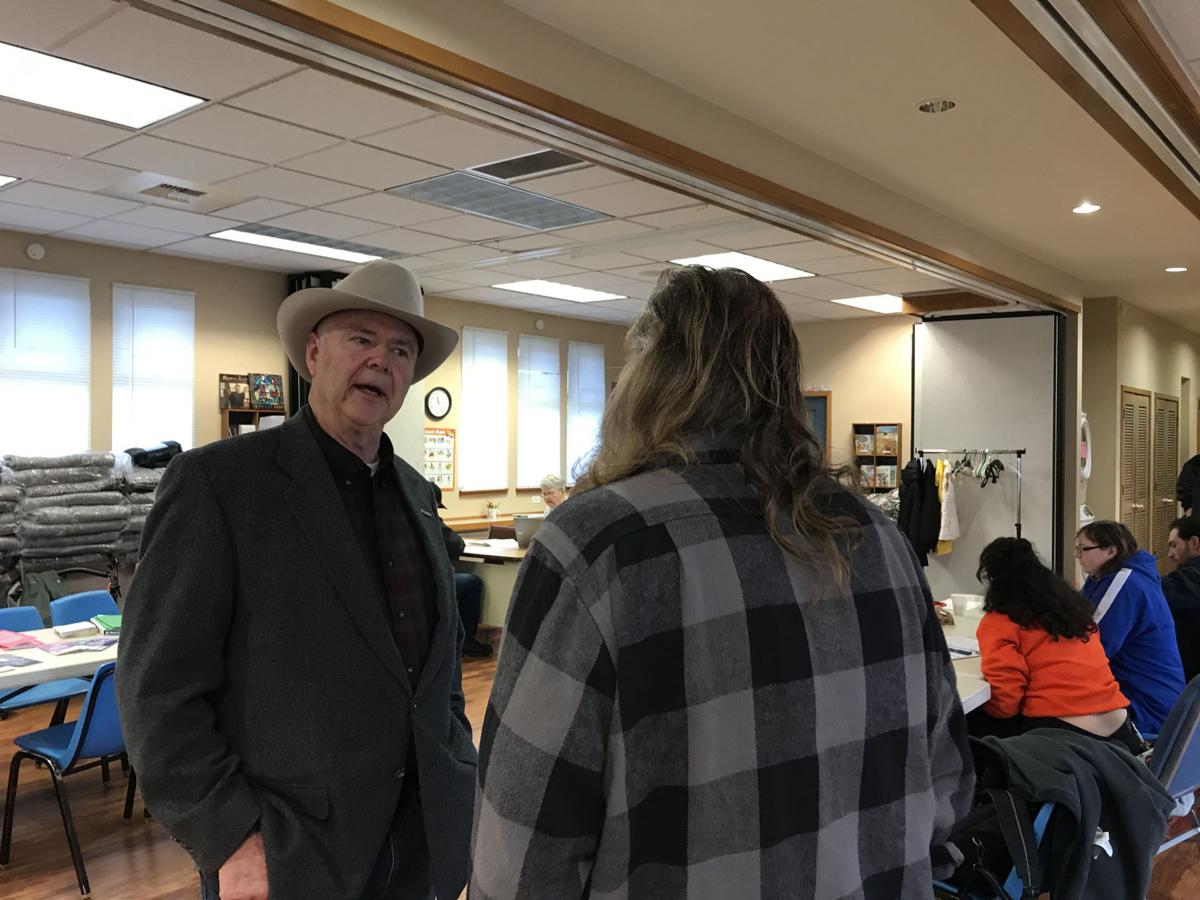 Thurston County Commissioner Gary Edwards, a supporter of the annual homeless census, attends a lunch service at Emanuel Lutheran Church on Thursday afternoon. The church hosted not only a lunch, but a number of services attempting to get people struggling with housing the assistance they need.

The 73-year-old Bald Hills resident characterized herself as crafty, and what she was making might be the most unique items she’s worked on in recent months — plastic bedrolls for the homeless.

“I just thought this would be fun and helpful,” she said. “I feel better about myself when I help others.”

Gotcher was one of 14 volunteers who came out Thursday, Jan. 23, for the annual Point in Time Homeless Census in downtown Yelm. She and many others, including those facing homelessness, gathered at the church, located on Third Street, at around noon for a potluck.

In addition to the Yelm census takers, there were also a number of services available for people struggling with housing, including the U.S. Department of Veterans Affairs, Olympia Indivisible, the Washington State Department of Social and Health Services, Sea Mar Community Health Centers and members from Love Abounds.

Many sites across Thurston County participated in this year’s census, which is conducted nationwide on the fourth Thursday of January in an attempt to gather statistics and data on those living without stable housing.

According to Thurston County staff, information from the count is not only analyzed on a county level but also is provided to the U.S. Department of Housing and Urban Development and the Washington State Department of Commerce. A report is also published in the months after the count.

The census is mandated by the state’s Homeless Housing and Assistance Act and under federal law.

Last year, the local census tallied 31 homeless individuals in the Yelm area. A total of 800 individuals in Thurston County were counted as either living in sheltered or unsheltered areas and transitional housing.

Yelm Point In Time Volunteer Coordinator Deb Larson, who was also on the recently-decommissioned Yelm omelessness task force, said her group made a concerted effort this year to tally some of the homeless population’s most vulnerable people — women and children.

This year, thanks to the expansion of services that were available at the church, Larson said they’re hoping to count people the group believes are hiding out in the community.

A few feared that they wouldn’t be able to get an accurate count because of concerns that people were more likely to stay in place due to the stormy weather.

“It’s a huge risk. People can get hypothermia in 45 degrees, it just depends on how dry you stay,” she said.

Census takers counted about 10 people shortly before noon. With permission, the group confirmed they planned on extending the census through Friday.

Larson said needs of the homeless and struggling individuals have been fairly consistent over the last few years.

“They want a shower, some place to do laundry,” she said. “That’s their top priority.”

For many of the people facing housing struggles in the Yelm area, those are the services that are least abundant. There’s also no established area within the city limits for homeless individuals to take refuge during emergency weather situations.

Thurston County Commissioner Gary Edwards was also at the event and praised the work of the volunteers.

Edwards said his personal approach to homelessness is more on the “tough love” scale, but he added that the data collected at the census is crucial for local governments.

“The only time we find out where people are from is during police incidents or medical incidents ... I think any time we can gather more information, we’ll make better decisions,” he said.

Port of Olympia Commissioner E.J. Zita was also present at the Yelm census.

“I think the organizers have done a great job in building trust,” she said.

Zita said she’d like to see the port help with the county’s homeless issue on two fronts. First, by outfitting unused shipping containers to help store people’s belongings and, secondly, by storing emergency service equipment at a port location on Washington Street in downtown Olympia to be used during emergency weather events.

“It’s a pretty small thing, it’s inexpensive, but it’s a small way we can contribute to the community where people are doing so much,” she said.

Variables that lead to people becoming homeless in Thurston County are about as multifaceted as the solutions, volunteers say.

According to last year’s Point In Time data, less than one-fourth of the program’s 500 respondents reported substance abuse issues. Nearly half of respondents also suffer with mental health issues.

The two leading causes of homelessness reported from 2019’s census were job loss and eviction, the county previously reported.

About one-third of those censused are deemed “chronically homeless,” meaning they’ve been homeless for more than a year and have a disability.

The Yelm City Council will soon be considering whether to take action on the recommendations of the Yelm Homelessness Task Force, which met last year to discuss what services are currently available for those facing homelessess and what services could potentially be added.

Back in October, the task force voted to move forward with five recommendations for the council: Hold a monthly clinic at the Yelm Community Center for service providers, establish a permanent homeless commission, increase law enforcement, review city ordinances on panhandling and continue to work with local nonprofits to provide services.