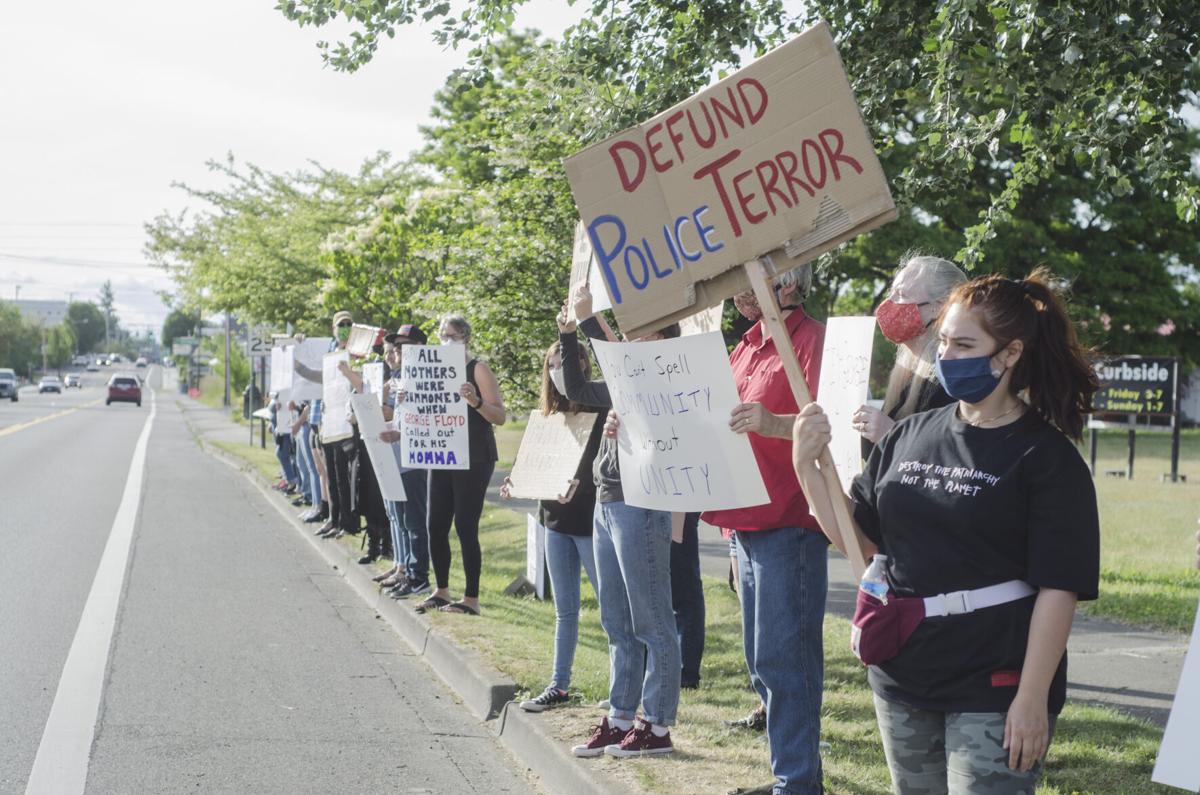 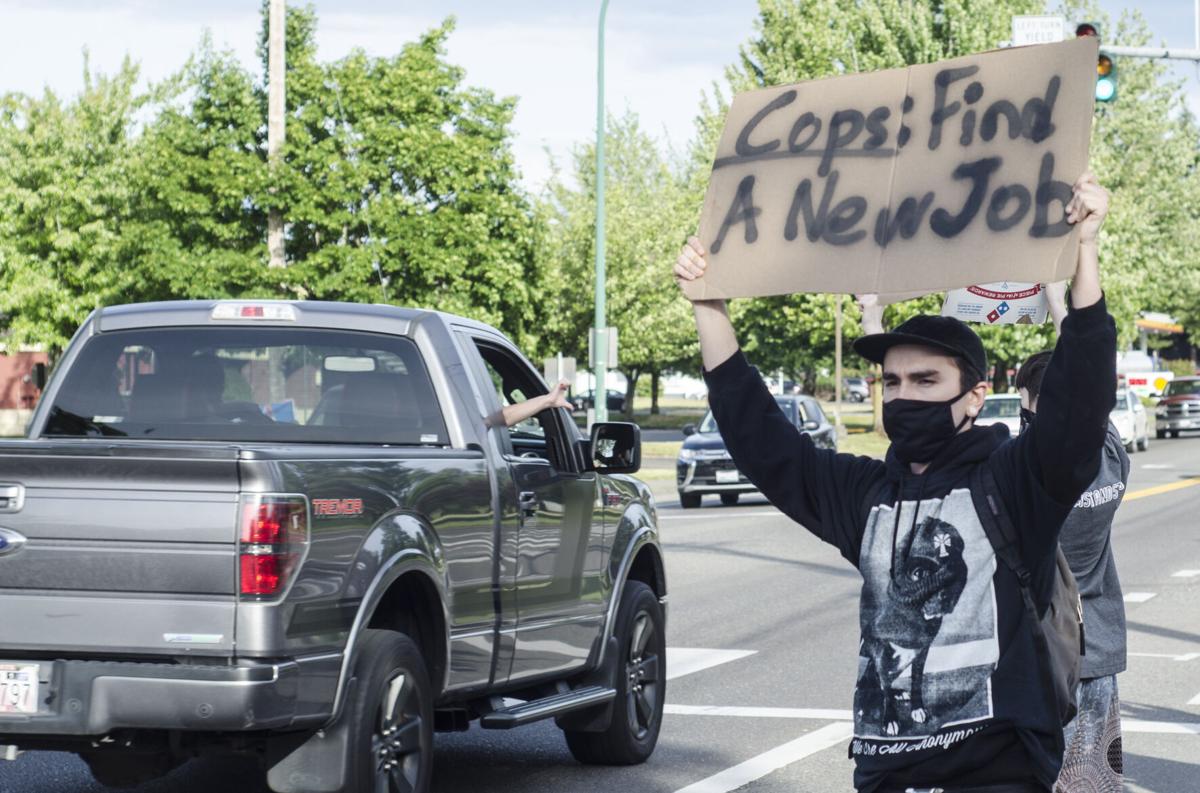 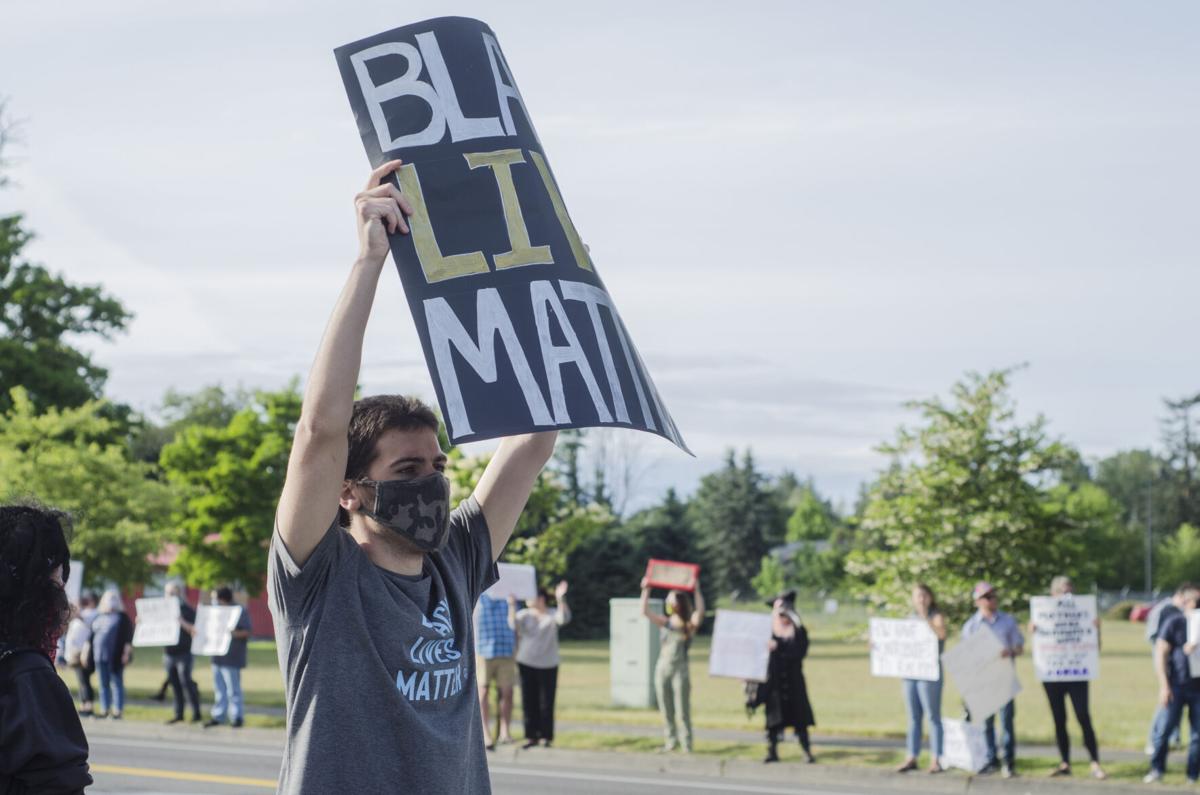 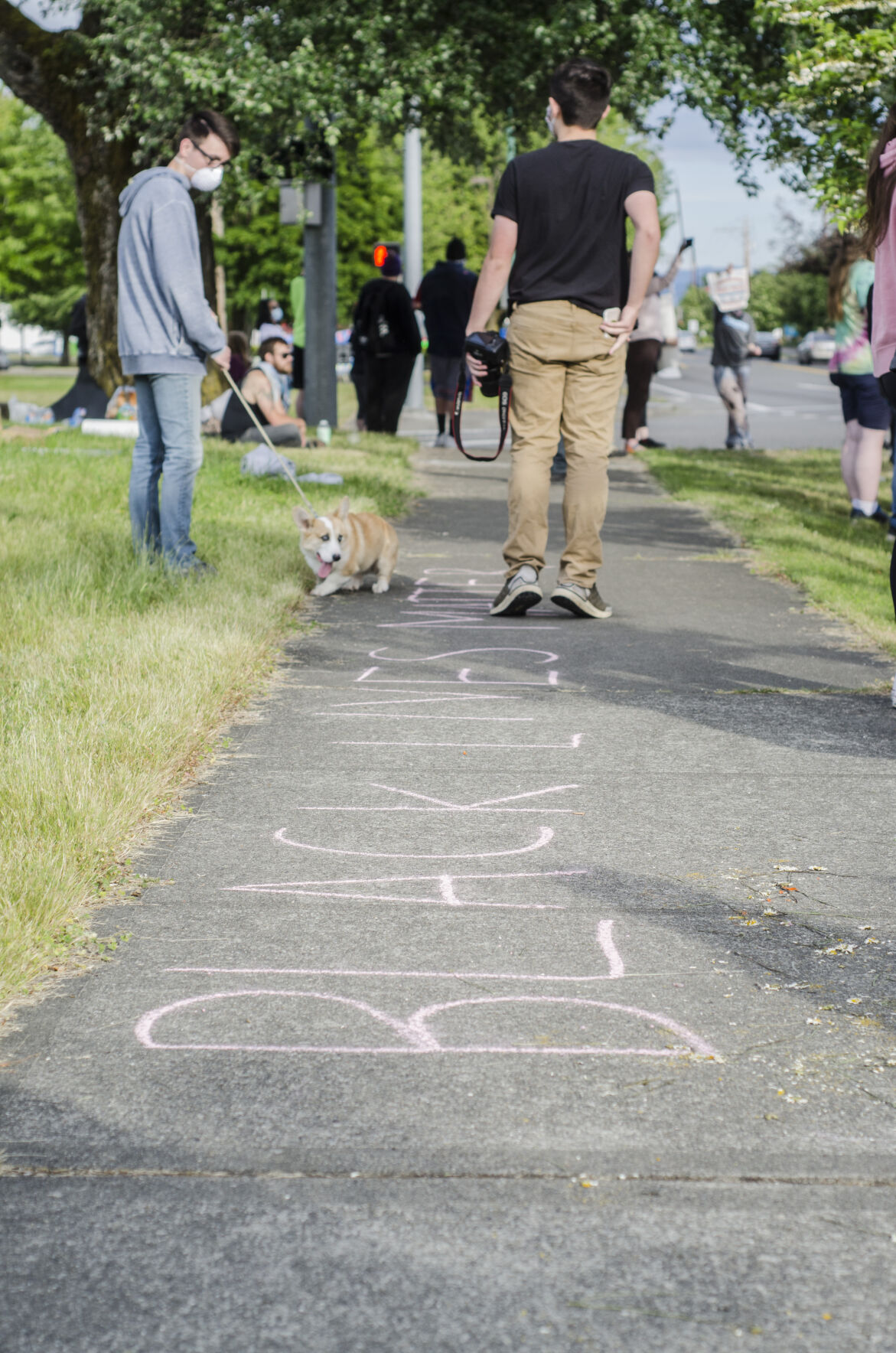 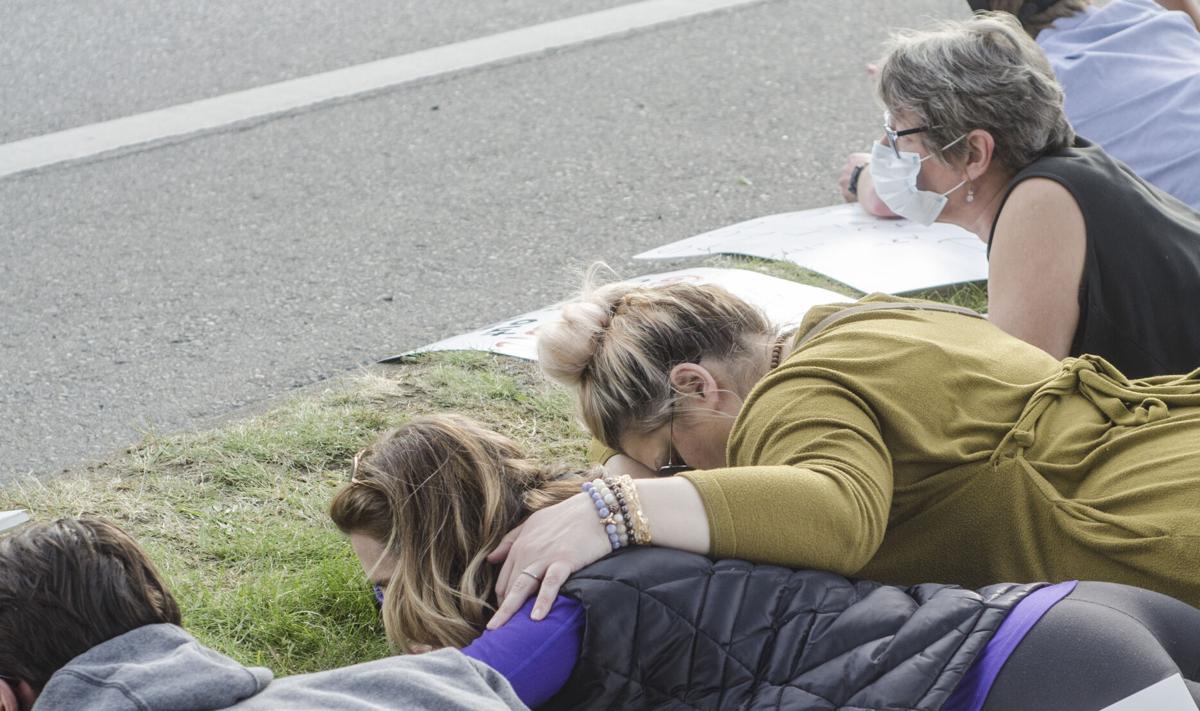 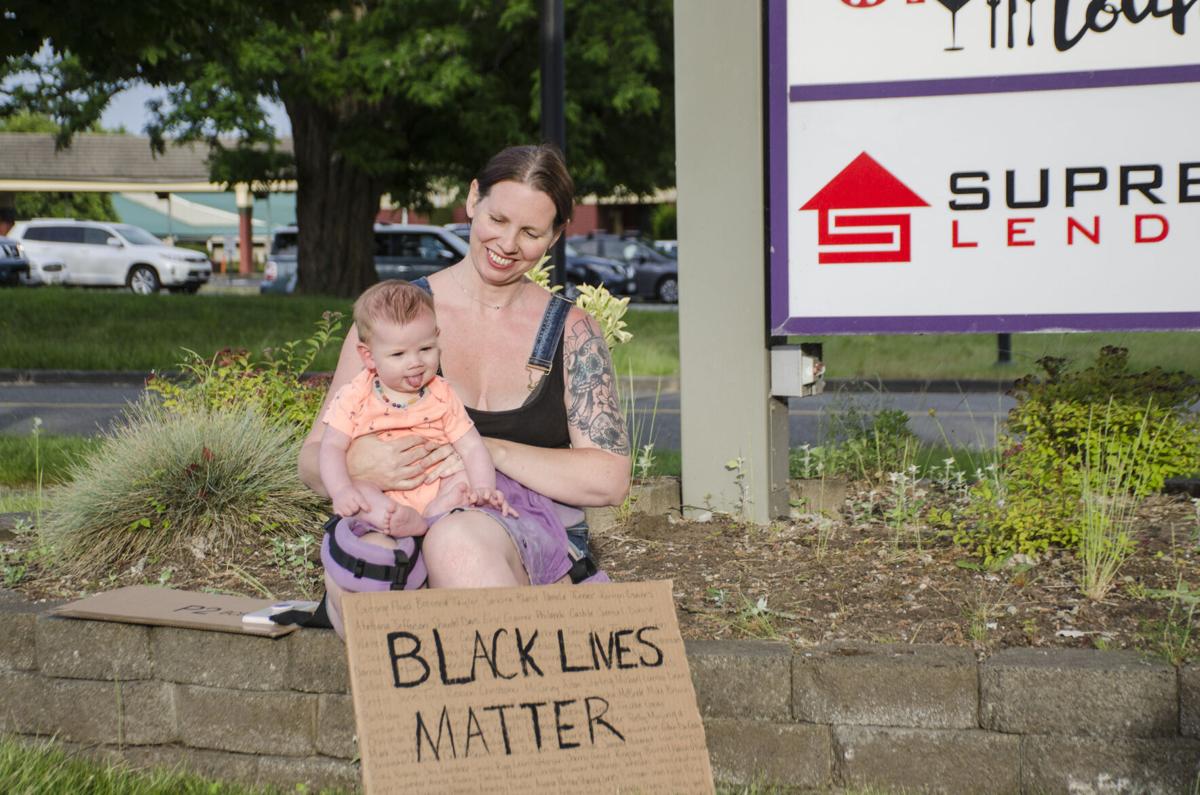 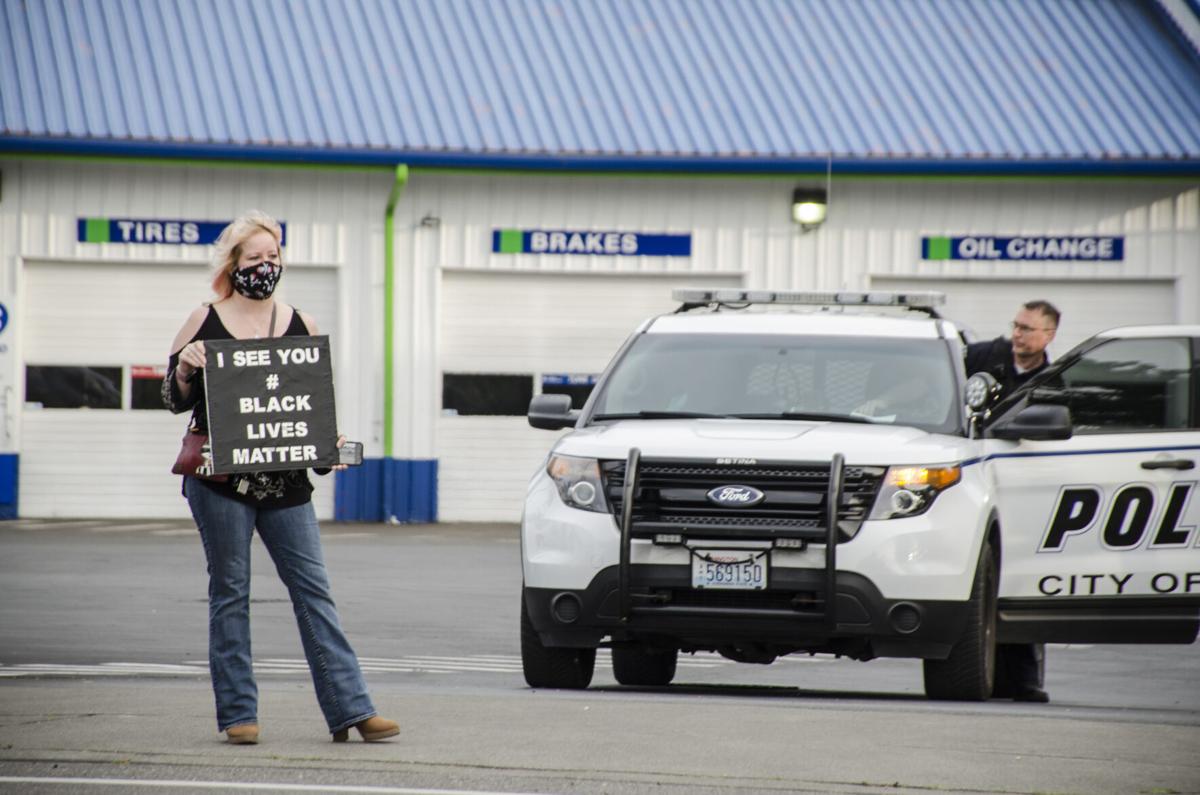 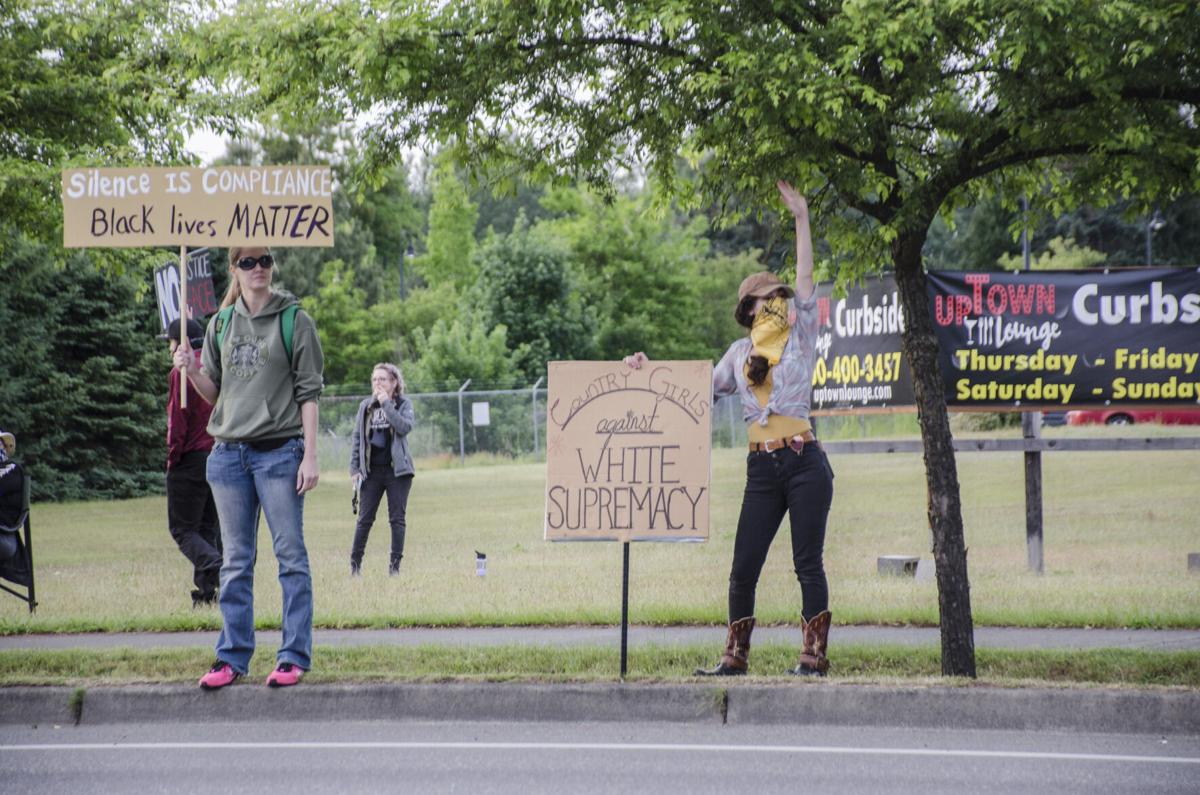 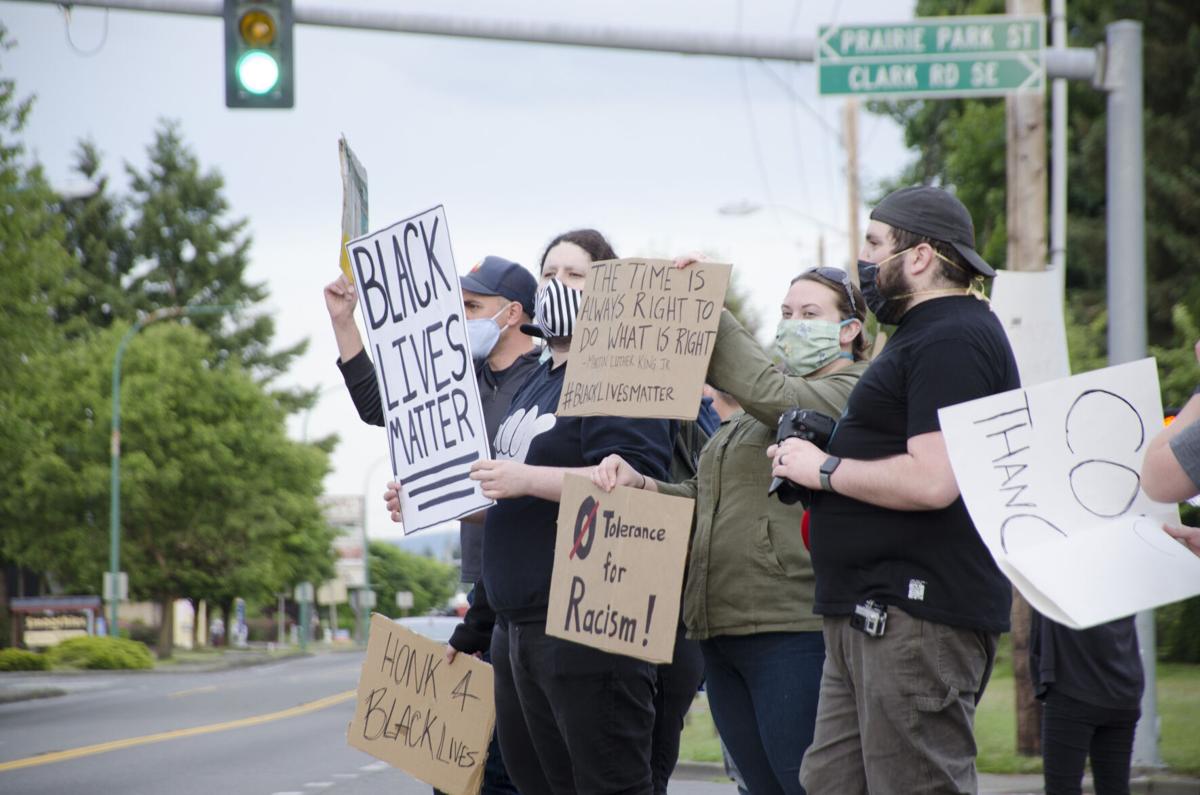 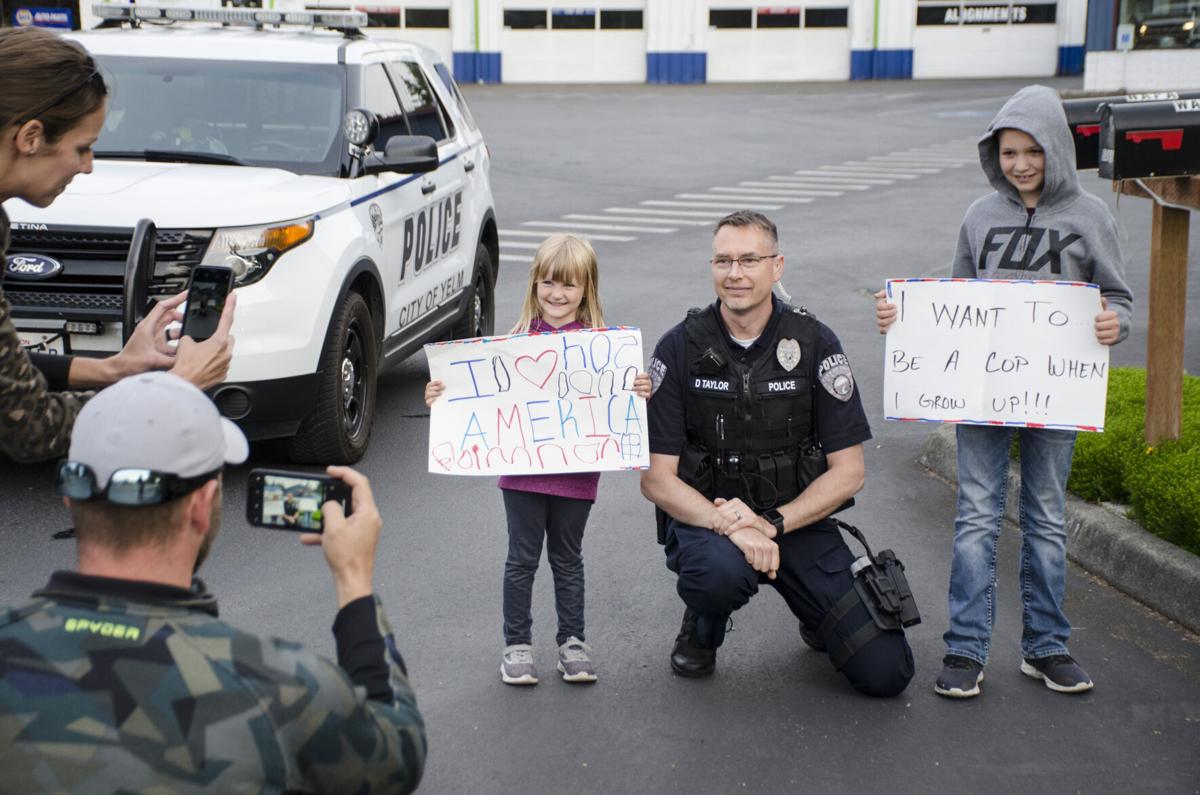 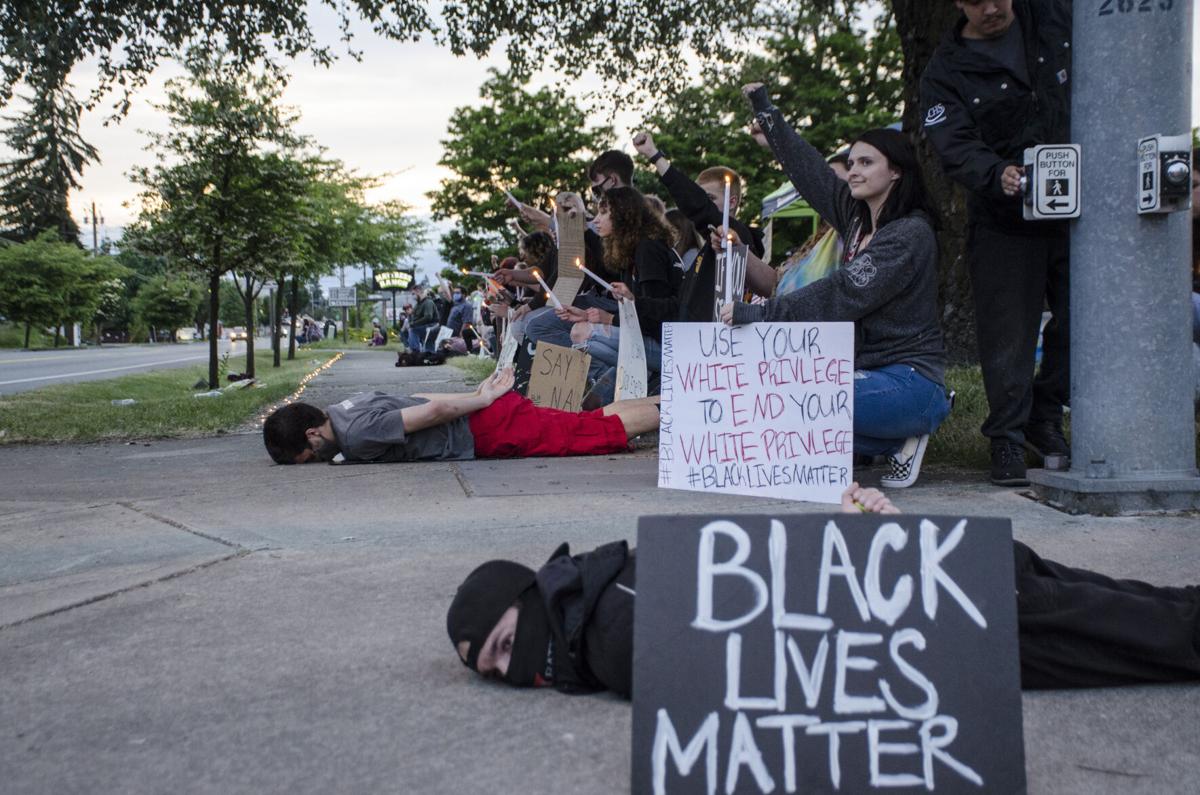 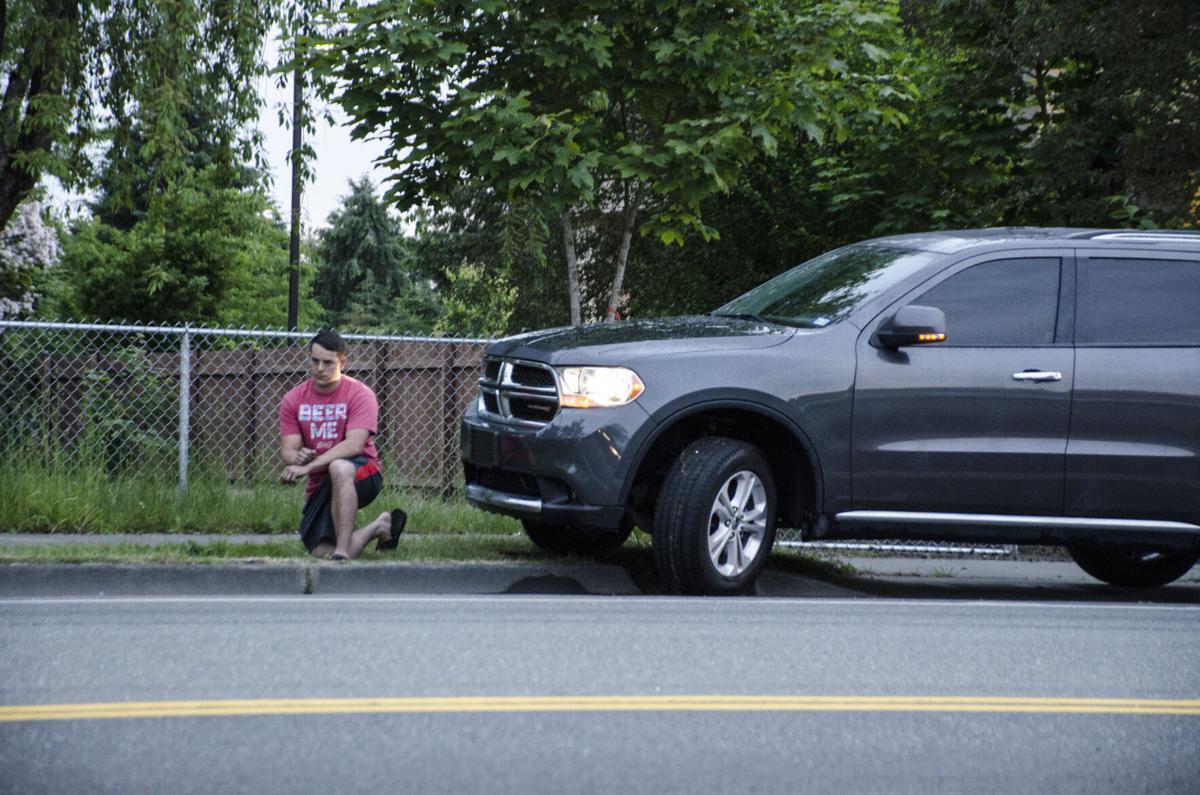 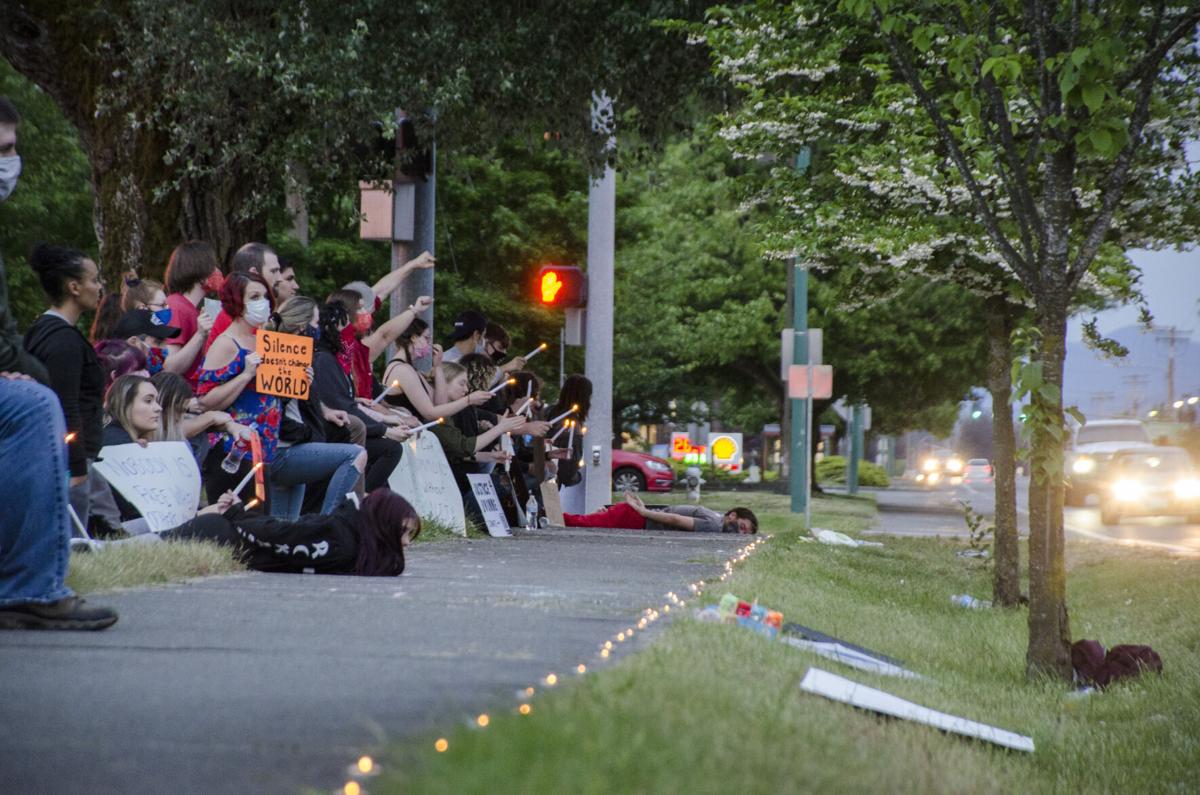 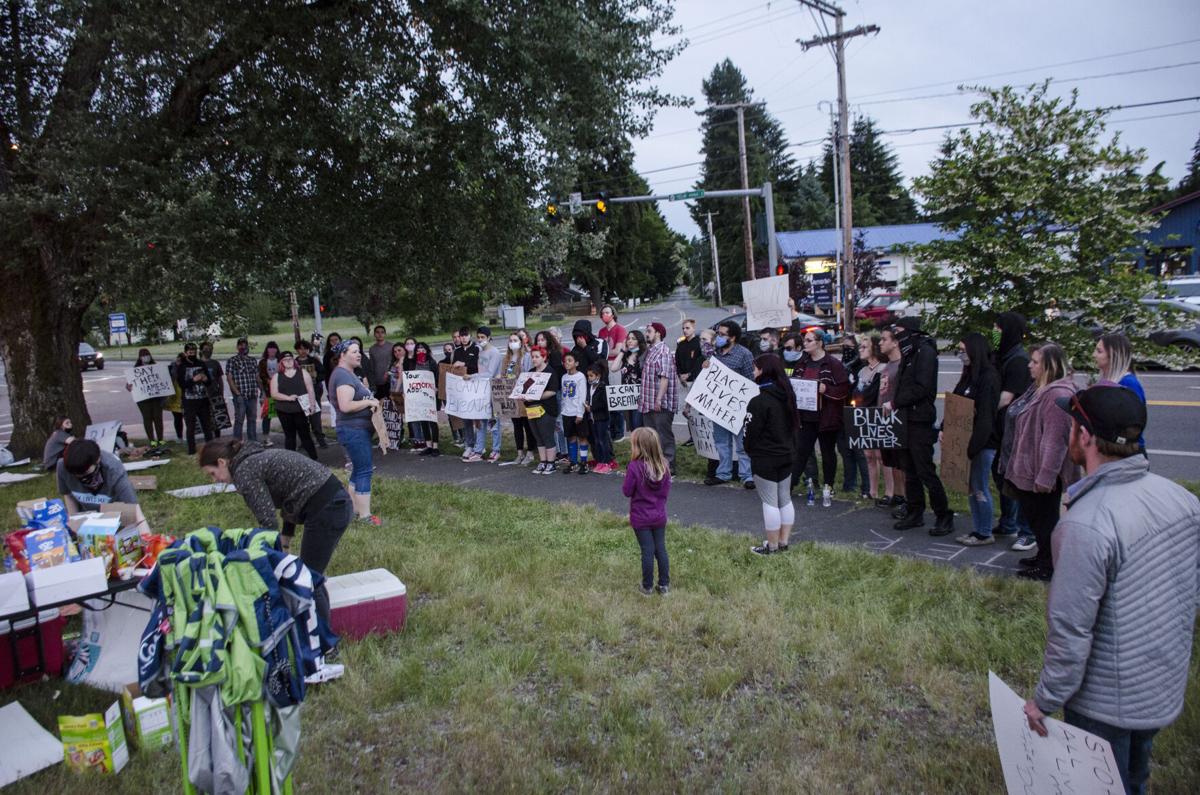 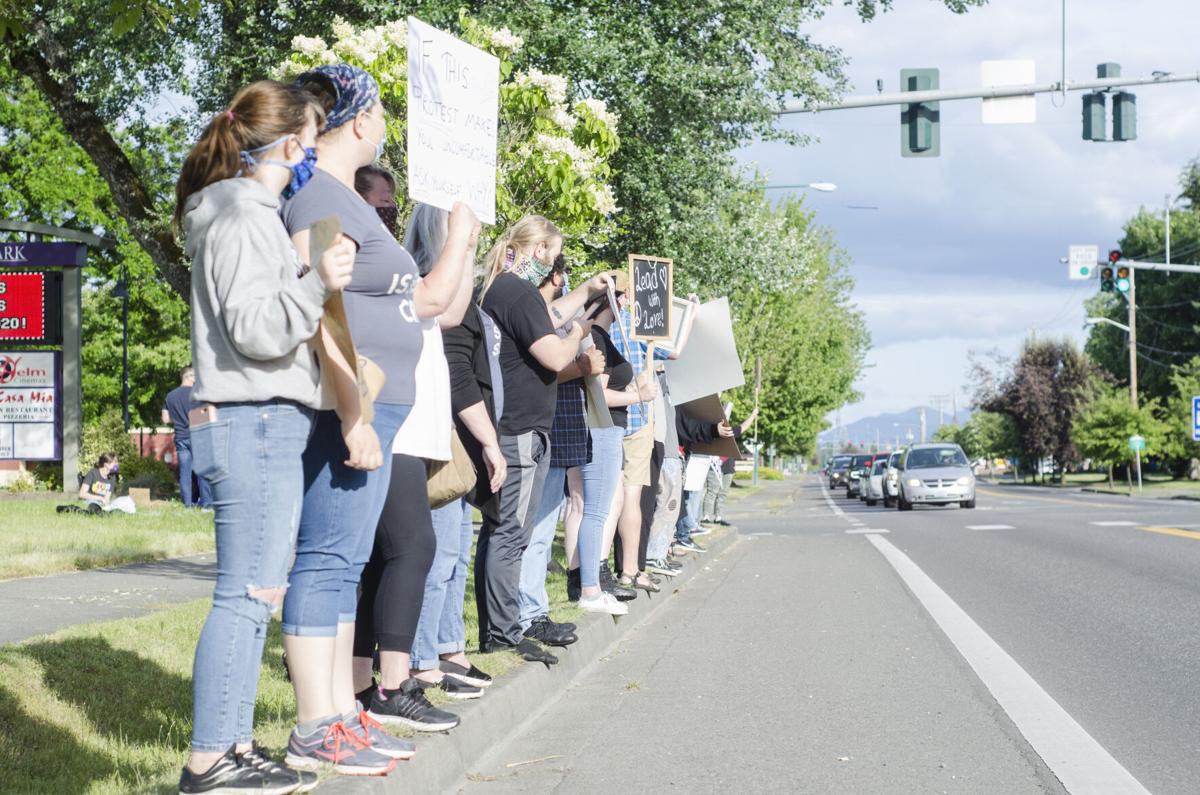 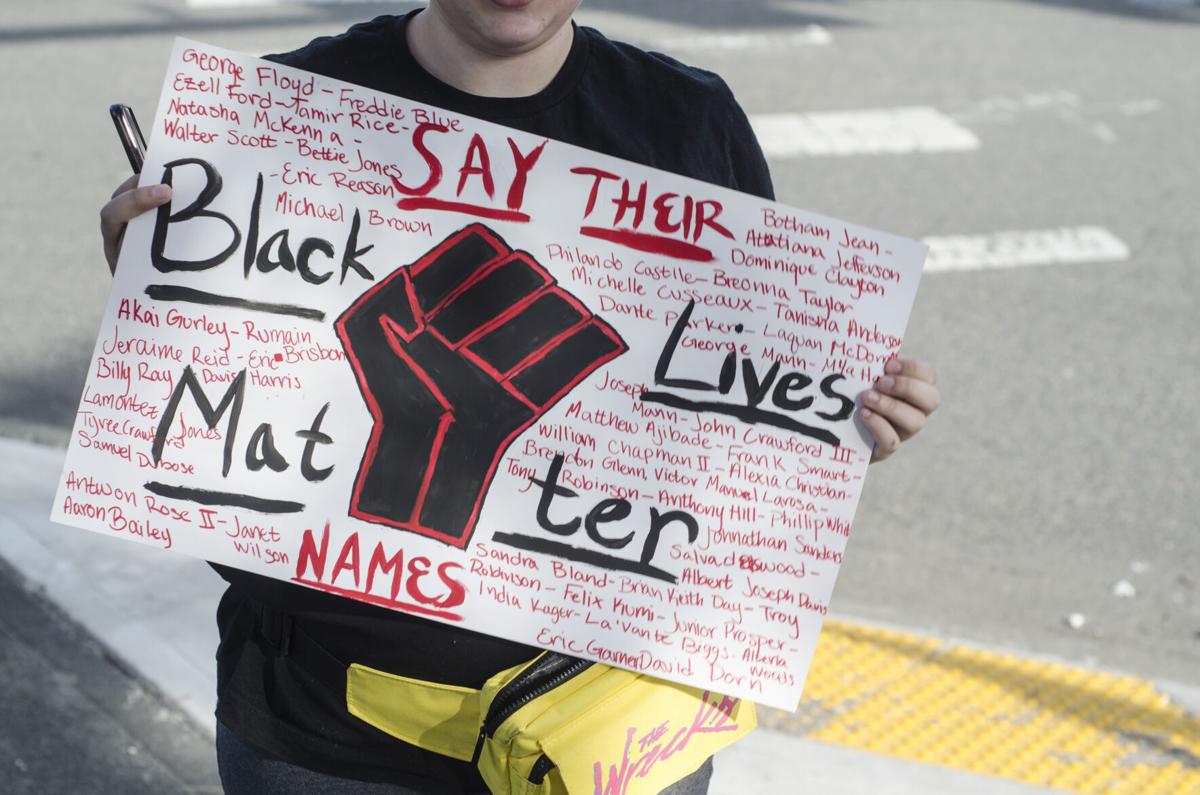 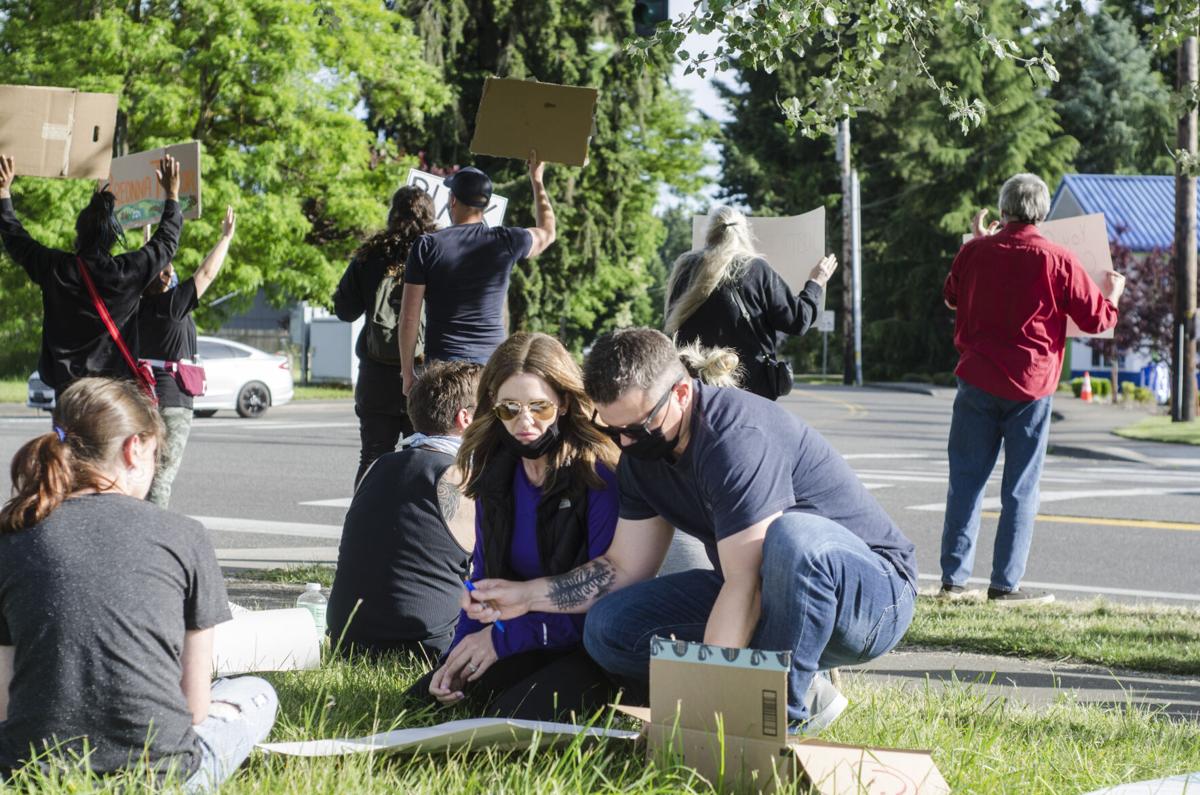 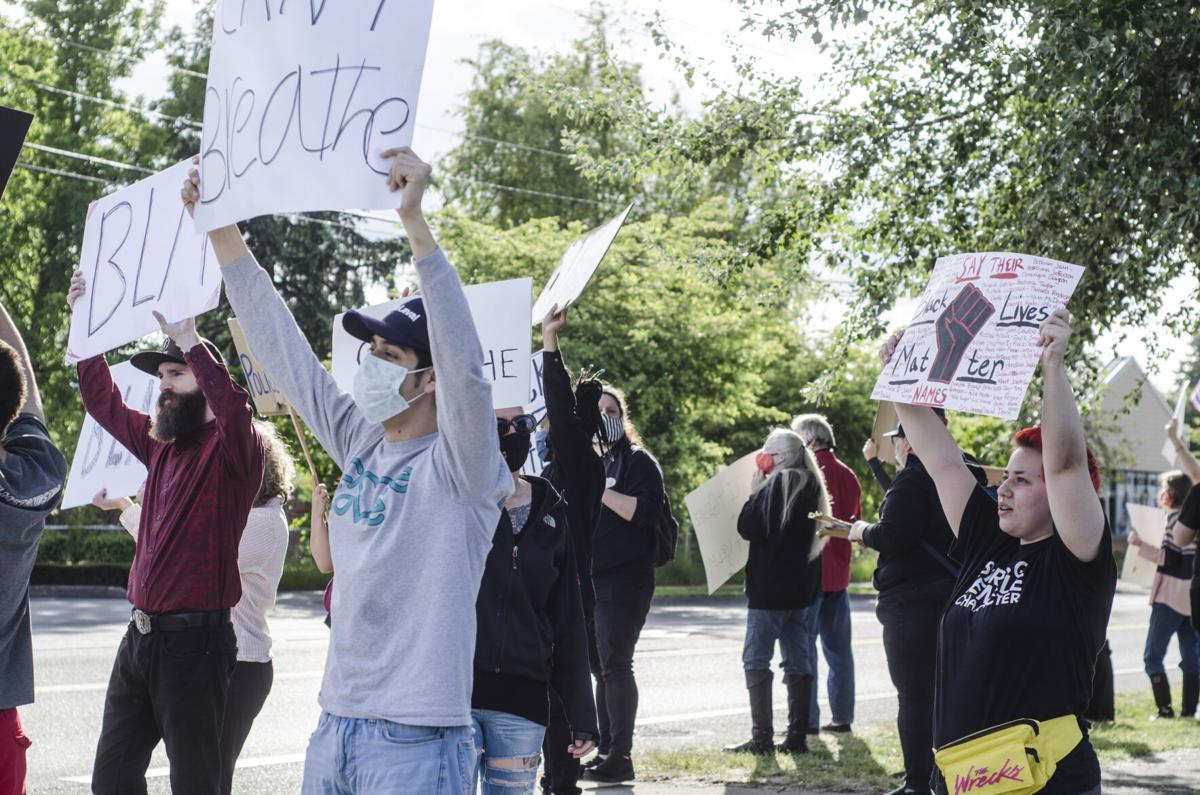 Yelm is not known as a protest town.

But on the 10th day of international protests over the death of George Floyd — a black man who died while being held under a Minneapolis police officer’s knee for almost nine minutes — some residents from the town of 10,000 couldn’t help but take to the sidewalks to speak out.

“Black lives matter,” “no justice, no peace,” “I can’t breathe,” and chants of Floyd’s name rang loud from about 100 protesters early Thursday evening near the intersection of Yelm Avenue and Clark Road.

It was the second day of protests held at the intersection. It was largely peaceful, aside from reports of a passerby throwing multiple eggs at the large crowd of protesters from a vehicle.

“Today, it’s a lot better,” said organizer Angelynn Merriman, 17, of Yelm. “And I think it’s more because it’s not just a bunch of teenagers. There’s adults with us and it’s just a bigger crowd. So, I think people are more accepting of that.”

The Black Lives Matter protest originally started with Merriman, her classmate Kiara Clifton, and four others who go to Yelm High School who were moved to action after hearing of Floyd’s death. During their first day of protesting, the group received a number of middle fingers, disparaging comments and even a threat of gun violence from people in passing vehicles.

But that didn’t stop them from taking to the corner for a second day.

When the high schoolers arrived at about 3:30 p.m. on Thursday, June 4, there were just three of them. But the group grew from there as supportive community members arrived.

Hayden Fogleman, 18, of Yelm, was one of the organizers. He said the goal was always to keep it loud but peaceful. He dismissed the negative rumors and comments that have spread online from rural community members fearful of the protest growing into something more dangerous, as has happened in larger cities.

About two hours into the protest, Merriman’s brother, 27-year-old Joseph Bardin, brought her 36 small cups of ice cream to help sooth the loud protesters’ throats. On the small field behind the sidewalk, a canopy tent sheltered multiple packages of water and snacks.

“My little sister was here yesterday, and I saw on her Facebook post saying that some people were being violent or whatever, so I wanted to come by today and make sure things were running smoothly,” he said.

Derek Carlson, 26, of Seattle, was one of the protesters who stood along Yelm Avenue. He held both a sign and a soap bubble toy.

He said he came to support the protesters and spread the message. He’s never lived in Yelm, but his girlfriend proudly proclaimed it as her hometown. The two have been busy over the last few days participating in the Seattle protests.

“This has been a walk in the park,” he said. “It’s nice to not be tear gassed and maced and have flash bangs thrown at you.”

Daniel Tapp, 30, has lived in and around Yelm for pretty much his whole life.

One of the few black men among the group, Tapp said police brutality has him fearing for his life, as well as the wellbeing of his two daughters.

“Everytime another shooting or police brutality happens, it just makes me more afraid to leave home to go to work. This most recent one was the straw that broke the camel’s back,” he said, adding later that “it makes me feel good that this many people care. There was a time when people didn’t, it seemed like it.”

Growing up in Yelm and having been adopted into a white family at a young age, Tapp said his youth was plagued with instances of being profiled at public venues, such as school and at grocery stores, and by police.

Even today, he’s noticed instances of profiling. As a caregiver working in Olympia, Tapp said he’s been followed by the Olympia Police Department into parking lots of businesses.

The intentions of others are what bothers him.

“The coronavirus is the last thing on my mind,” Tapp said, holding a sign that read Black Lives Matter. “(Police violence) will kill me faster than coronavirus will.”

During the protest, demonstrators along Yelm Avenue stopped waving signs and chanting to lay face-down on the ground for 8 minutes and 46 seconds — representative of the amount of time Floyd, a 46-year-old man, spent underneath the knee of a Minneapolis officer.

During that silent period, a passenger in a passing vehicle threw multiple eggs at protesters. Despite the opposing gesture, no one was seriously injured.

“The few nasties don’t take away from how supportive this town’s been,” said 41-year-old Jennifer Brooks. Her 18-year-old daughter was one of the demonstrators who was hit by eggs, she said.

A day after the incident, the Nisqually Valley News received an email from someone claiming to have been in that vehicle when the eggs were thrown.

In the email, the apparent passenger apologized for his friend, who threw eggs not once, but twice. The writer of the email said he has nothing against the protesters.

“I actually had (a) hard time sleeping last night because those people did not deserve that,” the author wrote.

The NVN wrote back in an attempt to verify this person’s identity, but the message went unreturned.

At about 7:45 p.m., 47-year-old Heidi Fitzgerald, of Yelm, and her 16-year-old daughter showed up to the protest. Her daughter had friends there, and she tagged along to show support for the cause.

Shortly after arriving, Fitzgerald walked up to Tapp.

“Would it bother you if I asked if I could hug you,” she asked him.

“Of course not,” Tapp replied.

After the short embrace, Fitzgerald broke into tears.

“I just want to hug every black person I see,” she told the NVN. “This is the first opportunity I’ve had all day.”

Fitzgerald said attending the protest was a cathartic experience for her. All week, as protests erupted across the country and after having watched for herself the video of showing the death of Floyd, something in her had been building up.

“The biggest part of this has been distinguishing between ‘black lives matter’ and ‘all lives matter,’” she said. “It’s like if you go in to see the doctor with a broken bone and he looks at you and says ‘all the bones matter.’ All our lives matter, but the black community is hurting right now.”

Around sunset, at about 8:45 p.m., protesters participated in a candlelight vigil to remember Floyd, taking another knee for 8 minutes and 46 seconds. Protesters disbanded afterward.

On Friday, the Yelm Police Department released a statement on the death of Floyd, saying officers and staff continue to be “devastated by the actions and events that took place in Minneapolis.” The statement also said the actions by Minneapolis officers don’t represent the way officers at YPD serve and protect the community.

“We have zero tolerance for any type of discrimination to the citizens we serve,” the statement reads. “We also know that the justice inequity in our country towards people of color is not going to just go away and that change is long overdue.”