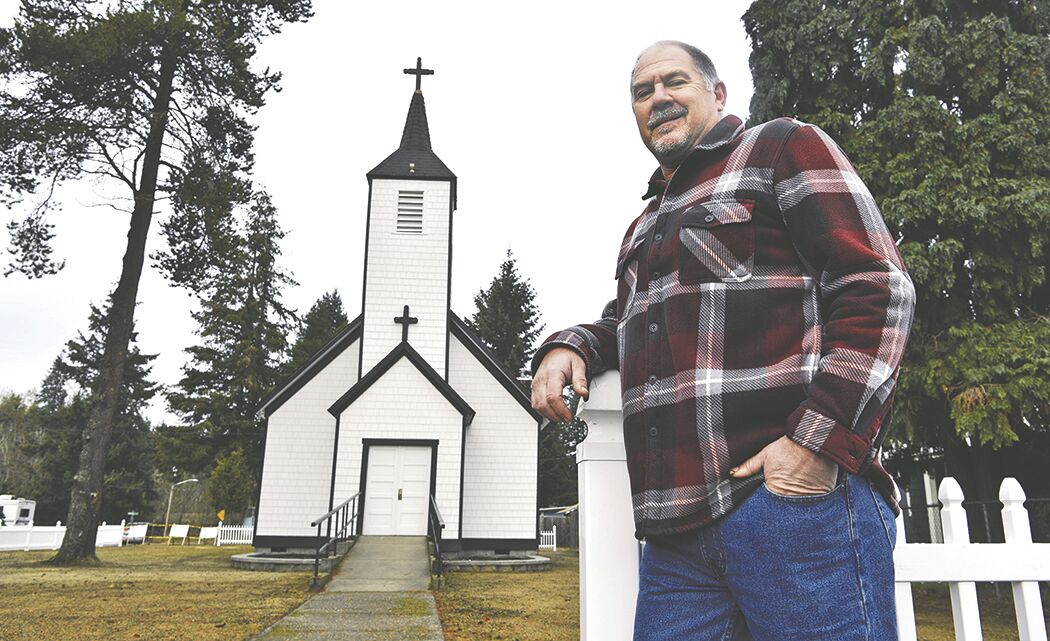 Rainier Mayor Robert Shaw is gratified at the progress the city's historic Zion Evangelical Lutheran Church has made since renovation began in spring 2019. 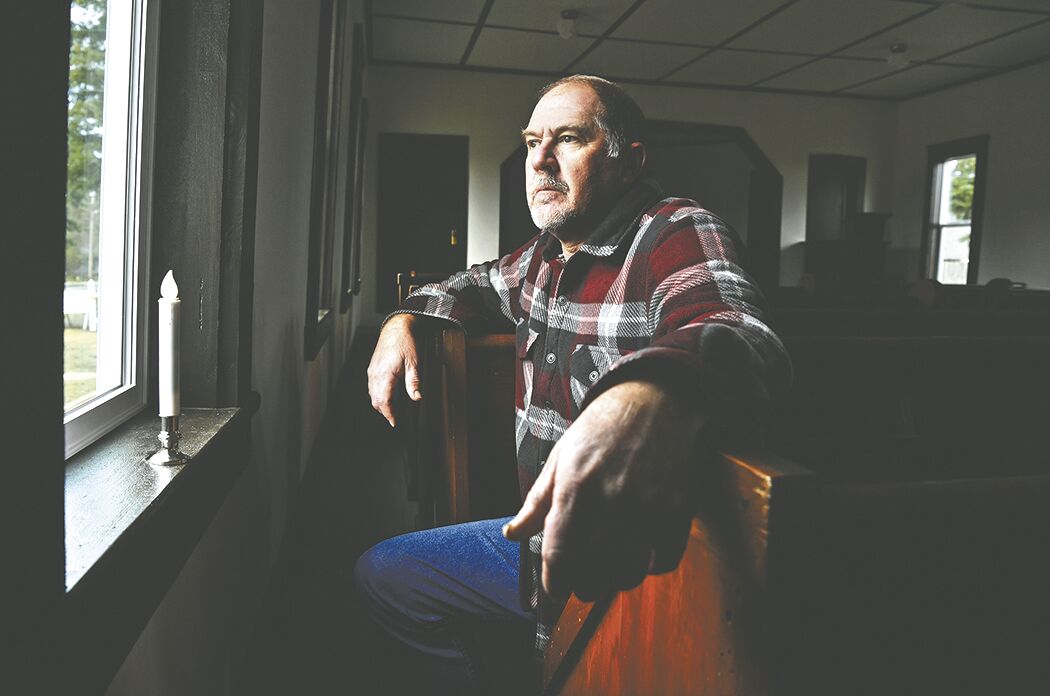 Rainier Mayor Robert Shaw sits in one of the repaired pews inside the city's historic Zion Evangelical Lutheran Church on Thursday, Nov. 12. 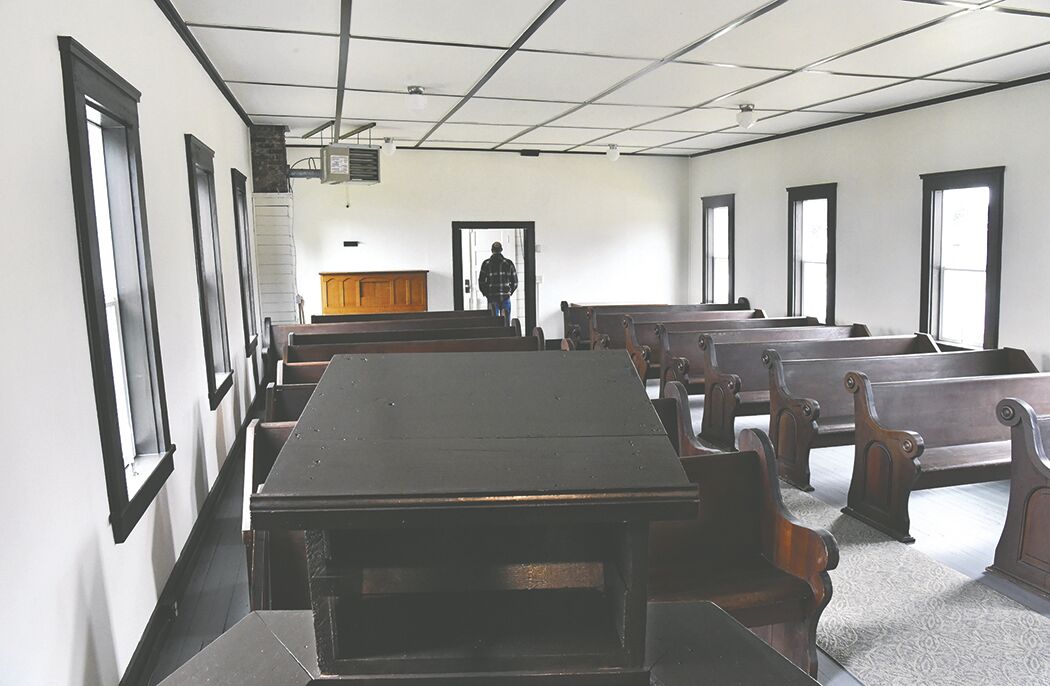 The city of Rainier's historic Zion Evangelical Lutheran Church has undergone major renovation since spring 2019 and is almost complete.

Like any fixer-upper — particularly one built in 1896 — the Rainier School & Zion Evangelical Lutheran Church has been a bit cantankerous lately as Rainier city officials slowly but surely refurbish and modernize the historic structure.

And nobody of late has been more involved in the process than Rainier Mayor Robert Shaw, who has been in the thick of things since spring 2019 when work on the iconic church revved into high gear. Refurbishing the masterpiece has been a little like plucking the leaves off an artichoke: It takes a while to get to the heart of the matter.

Said Shaw in an interview last week with the Nisqually Valley News: “Every time we started a project we found other things that needed to be addressed,” he said. “That just comes with the age of the church.”

Added Rainier Clerk-Treasurer Tami Justice: “When we began painting, we realized the doors didn’t close or lock (some originally used skeleton keys), and it was just one thing after another.”

But the intrepid restoration warriors worked on, and today the church is within a choir’s hymn of being complete.

According to the city of Rainier website and the Washington State Historic Register — to which the structure was added in 2007 — the Rainier School & Zion Evangelical Lutheran Church was built in 1896 by brothers Albert, Theodore and Paul Gehrke and was originally used as both a second school and church.

Situated on 0.24 acres at 207 Olympia St. West at the corner of Minnesota Street West, the 1,112-square-foot white pioneer building dominates the surrounding landscape. Particularly intriguing as referenced on the city’s website is the structure’s “engaged square tower that includes a gabled vestibule surmounted by a belfry with hipped roof crowned with a spire and cross.”

The building — deeded by the church in November 1995 to the city of Rainier for $3,500 — underwent its first serious renovation 1 1/2 years ago when the city installed a septic system and a bathroom, a notably lacking feature that had precluded the city over the years from utilizing the structure to its full potential.

“The biggest thing is we had to get a septic and bathroom for it,” Shaw said. “And after that, the city council wanted to get it refurbished and bring it back to life to get more use out of it.”

Once the bathroom and septic were complete, the city went to work installing new exterior siding — called HardieShingle staggered-edge paneling — then installed all new insulated, double-pane windows. And finally toward the last half of 2019, workers painted the church’s exterior.

Then from March until November 2020 — with major hiccups because of COVID-19 — the city concentrated on the inside of the church. That included painting, installing new carpet, refurbishing floors, repairing pews, updating the electrical system and adding some decorating touches.

Also in 2020 the city tore out the original grass surrounding the church, hydro-seeded that area, installed a sprinkler system and rimmed the church with a white, picket fence.

“Because of COVID we just barely got that part of the project done by November,” Shaw said. “We were hoping to have the whole project done this past spring, and then COVID slowed the process down. The workers had so much to do at that point, and they were trying to please everybody.”

But there’s still a bit more to do before the grand vision is complete: plant flowers in two beds, install an 8-foot-tall arbor at the front entry gate, install exterior lighting in the entryway, and build a walkway around the front three sides of the church. Shaw expects the final touches to take a couple of weeks and be complete by spring 2021.

And though the church has needed upgrading for many years, it wasn’t as though it was about to crumble before the recent refurbishing. In fact, even without a bathroom it intermittently served the community in various ways.

According to Justice, several churches have rented the site over the past seven years or so for their own services. Yelm-based Victory Baptist Church, for instance, rented the building for $400 a month from 2012 to 2014.

Back in 1997 it was the site of a funeral service, but then lay dormant until it hosted a 2005 wedding. It is scheduled to entertain another wedding in December. More recently — as in November 2019 — the church was highlighted in a portion of the 97-minute feature movie “The Deliverance of Amy Stronghold,” produced and directed by Olympia-based writer-director Seth Himes.

The building’s enhancements are a joy to behold and are well deserved, Justice said.

“It was the vision of Charmayne (recently retired Rainer Clerk-Treasurer Charmayne Garrison) and our current council,” she said. “We thought it was a pillar of our community and having it sit there dilapidated wasn’t in the interest of our community or the church.”

Added Shaw: “It’s been rewarding, too, to get positive feedback from the community, and it’s gratifying seeing our vision come to life.”

And in our ever-more-expensive world, achieving that vision has been relatively cheap.

So far, the city has spent $80,000 renovating and landscaping the church — $10,000 of that amount aided by a grant from the Port Of Olympia and another $5,000 secured through a Thurston County Heritage grant administered by the Thurston County Historic Commission.

The city — which Justice said is currently revamping its church rental agreement — will also, no doubt, recoup its expenses in the future as more people discover the renovated church and its new amenities.

Concluded Justice: “I’m just in awe of what it looks like now from what it looked like two years ago. It’s just very rewarding to see the changes that have been made.”

Interested in renting the refurbished Zion Evangelical Lutheran Church? Simply visit Rainier City Hall at 102 Rochester St. West to pick up a rental application. You can also learn more about the history of the church at https://cityofrainierwa.org/public-works/church.

Interested in renting the refurbished Zion Evangelical Lutheran Church? Simply visit Rainier City Hall at 102 Rochester St. West to pick up a rental application. You can also learn more about the history of the church at https://cityofrainierwa.org/public-works/church.