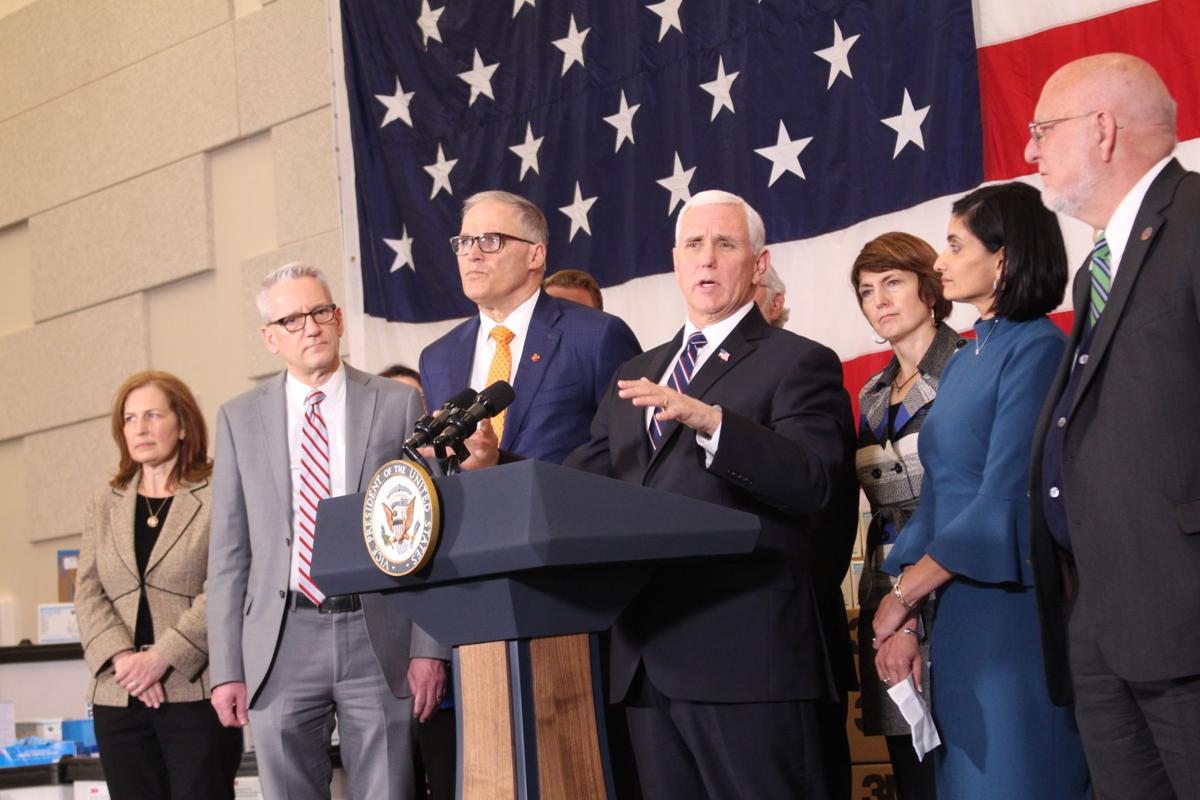 Vice President Mike Pence, center and Washington Gov. Jay Inslee, to his left with state and federal officials addressed discussed a cooperative response to the COVID-19 coronavirus in early March. 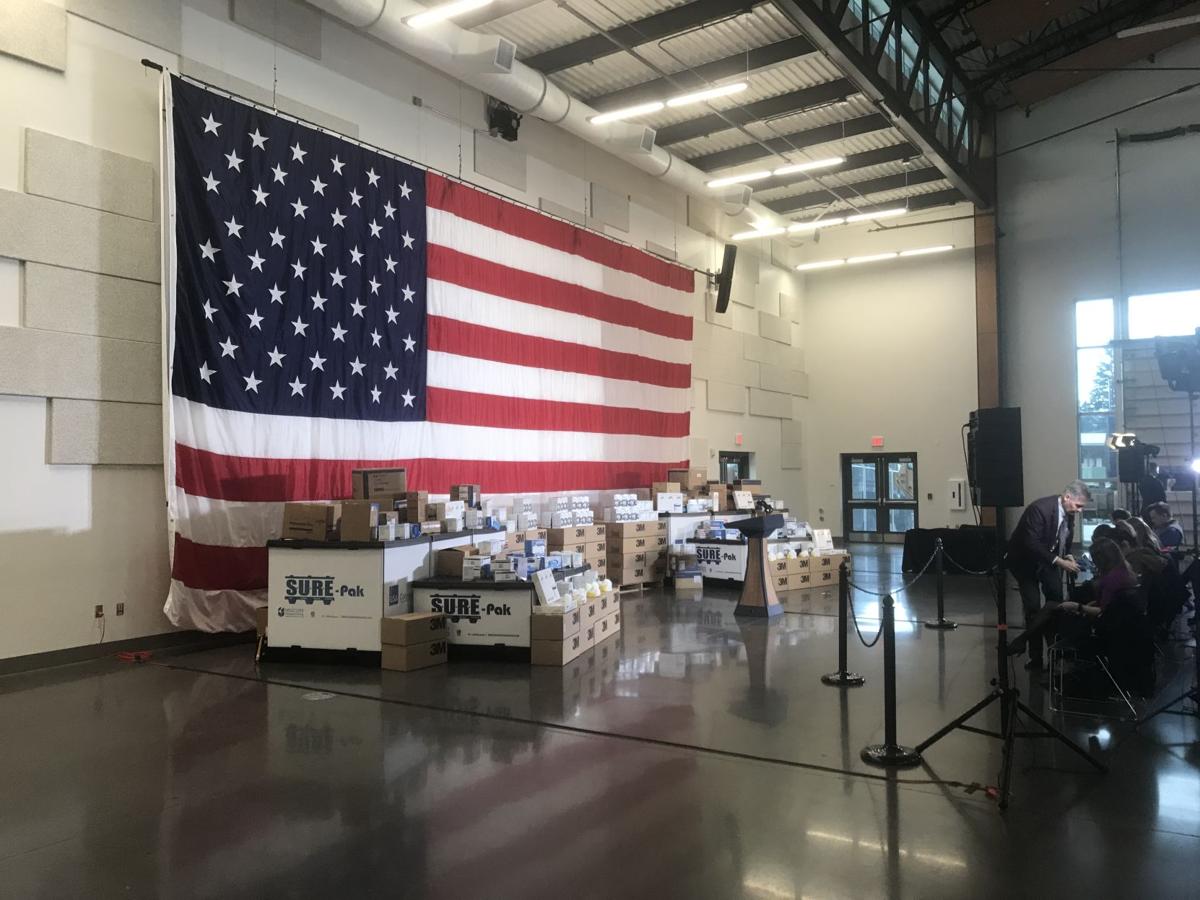 Some medical supplies, including face masks, respirators and gowns provided to Washington by the federal government.

Vice President Mike Pence, center and Washington Gov. Jay Inslee, to his left with state and federal officials addressed discussed a cooperative response to the COVID-19 coronavirus in early March.

Some medical supplies, including face masks, respirators and gowns provided to Washington by the federal government.

After his Thursday, March 5, meeting with the governor and public health officials, Pence announced that Congress has approved $8.3 billion in funding to respond to and slow the spread of coronavirus nationwide. President Donald Trump is expected to sign the bill on Friday.

Pence said the approved funding includes not only money for federal agencies, but also resources for state and local efforts to fight the outbreak.

Pence said the bill will also provide research funding to develop therapeutic drugs for those infected as well as an eventual vaccine, which he estimated could take more than a year and a half before being tested and approved.

Inslee said his discussion with the vice president included talks of increasing testing capacity, increasing hospital and clinic capacity as well as worker compensation for those who cannot work because of their infection.

John Wiesman, secretary of Washington’s Department of Health, reported Thursday that there are now 70 known cases of COVID-19 infections in Washington state, up from 39 known cases the day before.

The bulk of the infections have been discovered in King and Snohomish counties, but Wiesman said there is now one confirmed case in Grant County. The Grant County Health District confirmed that a person in critical condition has tested positive for the virus.

According to reports from the Snohomish and King county health departments, the deaths occurred in people who were elderly or had underlying health conditions  — a group Wiesman said is the most vulnerable population.

Pence said the majority of people who have contracted the virus are recovering and doing well.

Earlier this week, Wiesman briefed the Senate Ways and Means Committee regarding the outbreak in the state. Wiesman requested $100 million from the Legislature in order to respond to and slow down the spread of the outbreak.

Facing end-of-session deadlines, the Legislature scrambled to unanimously approve $100 million from the state’s rainy day fund to address the outbreak.

Rep. Larry Springer, D-Kirkland, whose district includes the Life Care Center nursing home in Kirkland — the site of a deadly outbreak that affected residents and staff members — said at the state level, all the Legislature can do is allocate resources for local and state agencies.

Springer said he lives near Life Care Center in Kirkland and said the local response has been “as good as it could be.”

Springer said about two dozen firefighters in his district are quarantined after responding to calls that put them in close proximity to patients infected with the virus. He said this will require additional funding and resources as first responders and medical practitioners continue to put themselves on the frontlines of the outbreak.

King County reported this week it intends to purchase a Econo Lodge motel in Kent to serve as a quarantine facility in preparation for a potential surge of infections.

Wiesman said earlier this week that two mobile homes are being rented to be used as mobile quarantine spaces.

As public anxiety grows around the state, residents who fear they are experiencing symptoms of the coronavirus have turned to Twitter to express their frustrations with the lack of available testing in the state.

“Testing kits are limited still so health professionals have established a criteria themselves about who is eligible for testing,” Inslee said Thursday.

Inslee said the priority for testing is for elderly people or those with underlying health conditions who are displaying symptoms.

Wiesman said Thursday that the University of Washington School of Medicine now has the testing capacity for 750 to 1,000 people a day.

Inslee said that based on advice he has received from medical experts, the vast majority of people who contract the virus will only experience mild symptoms if none at all, but the concern is that individuals who are infected may unknowingly pass the virus to someone who is vulnerable.

Inslee encouraged individuals to consider avoiding large gatherings of people and to not go to work if they are feeling sick.

Fragile Elderly at the Hub of Washington’s COVID-19 Crisis

A week into the outbreak of the deadly coronavirus at a facility caring for frail and elderly people, John Weisman, secretary of the state Dep…