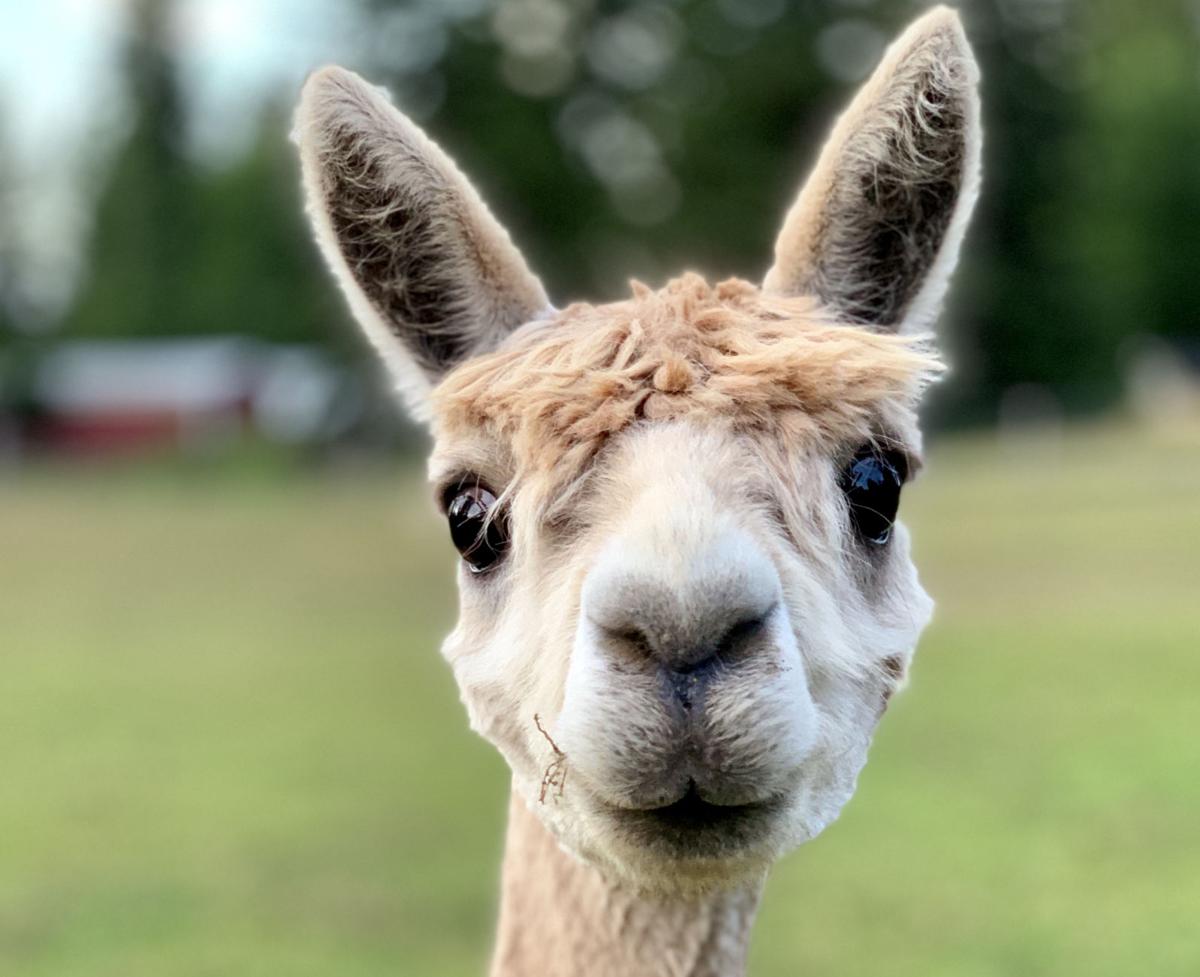 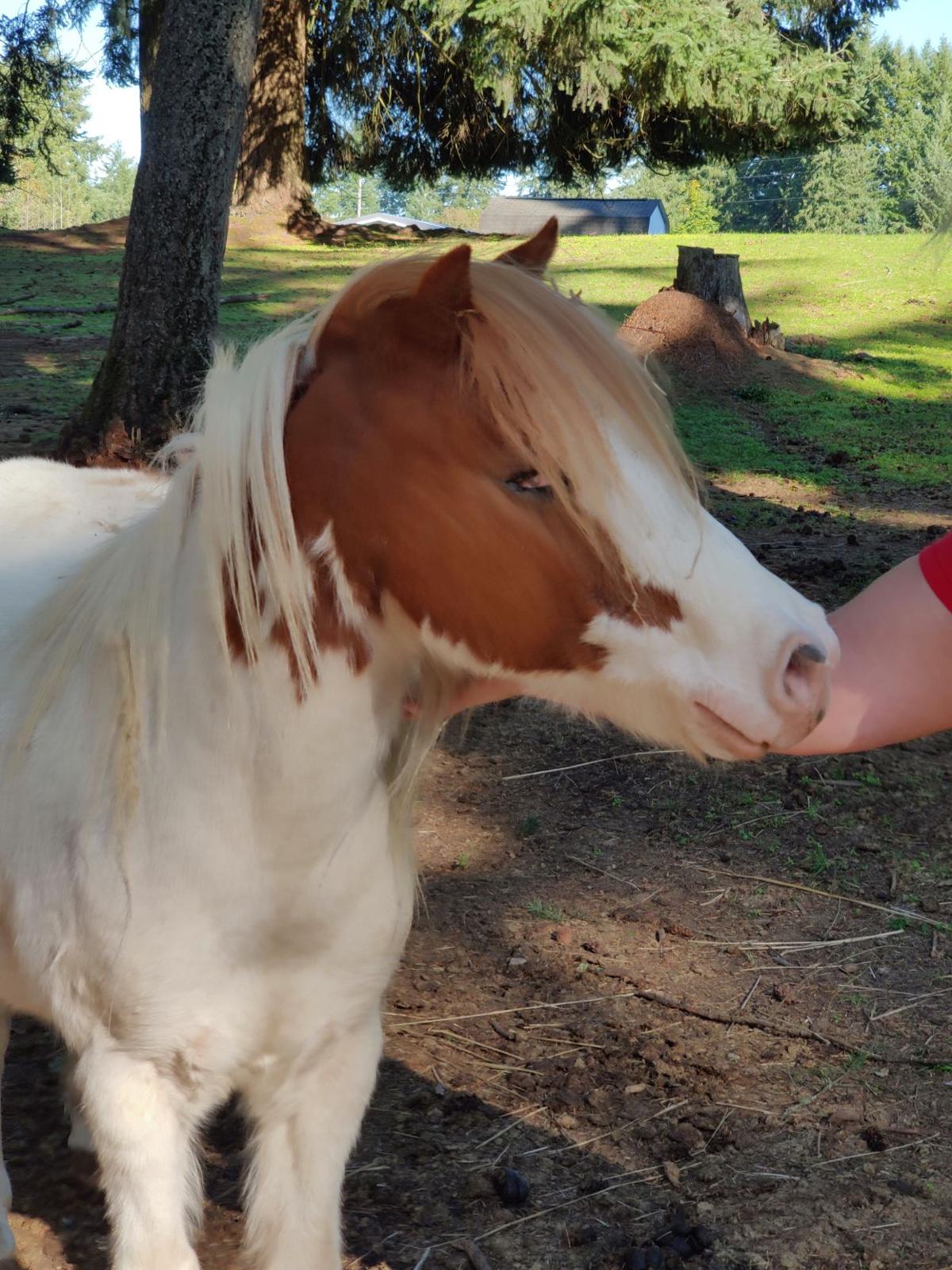 Bruce is an adorable miniature pinto horse who is totally blind but completely cute and curious, according to writer Wendy Tinker. 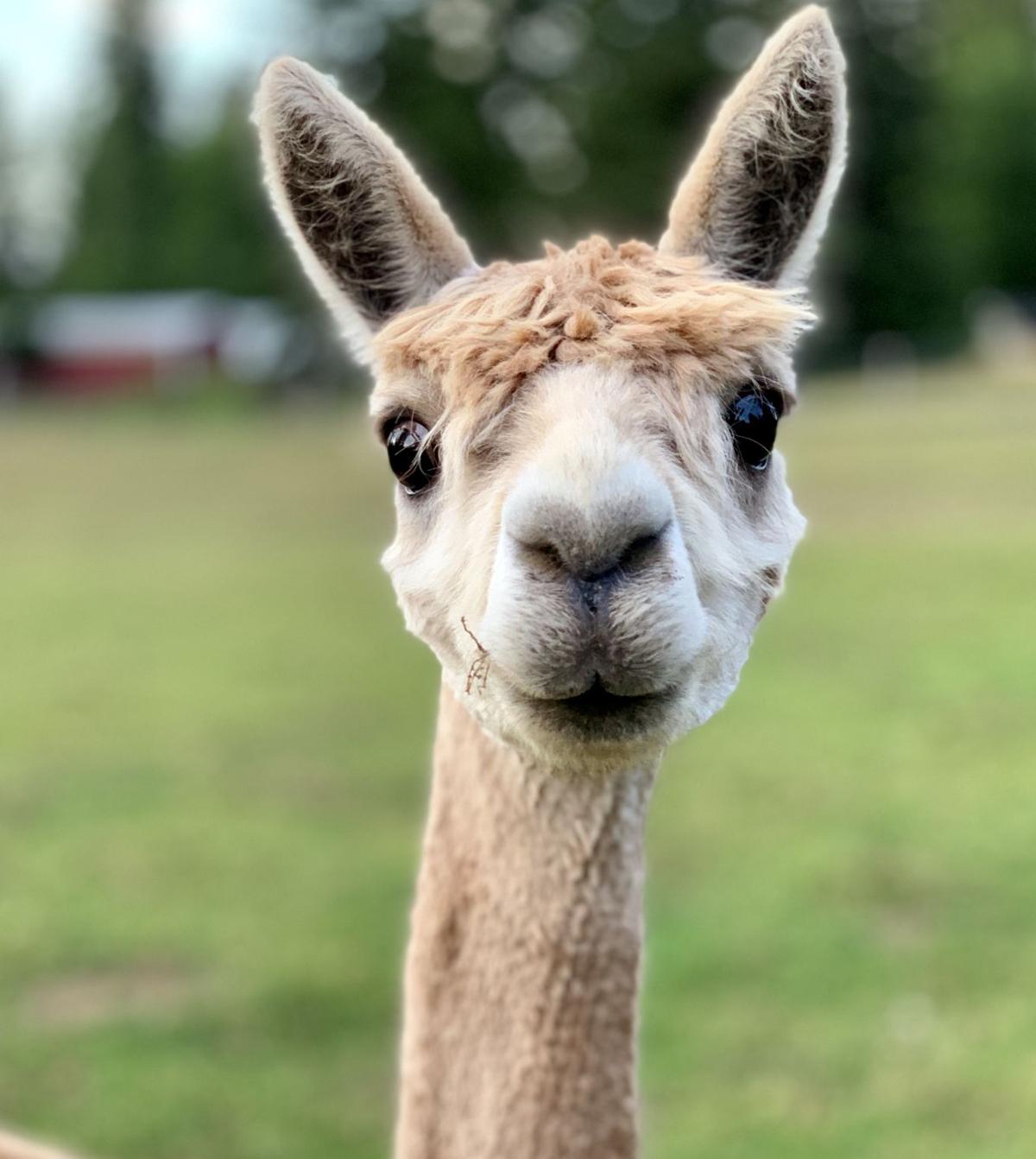 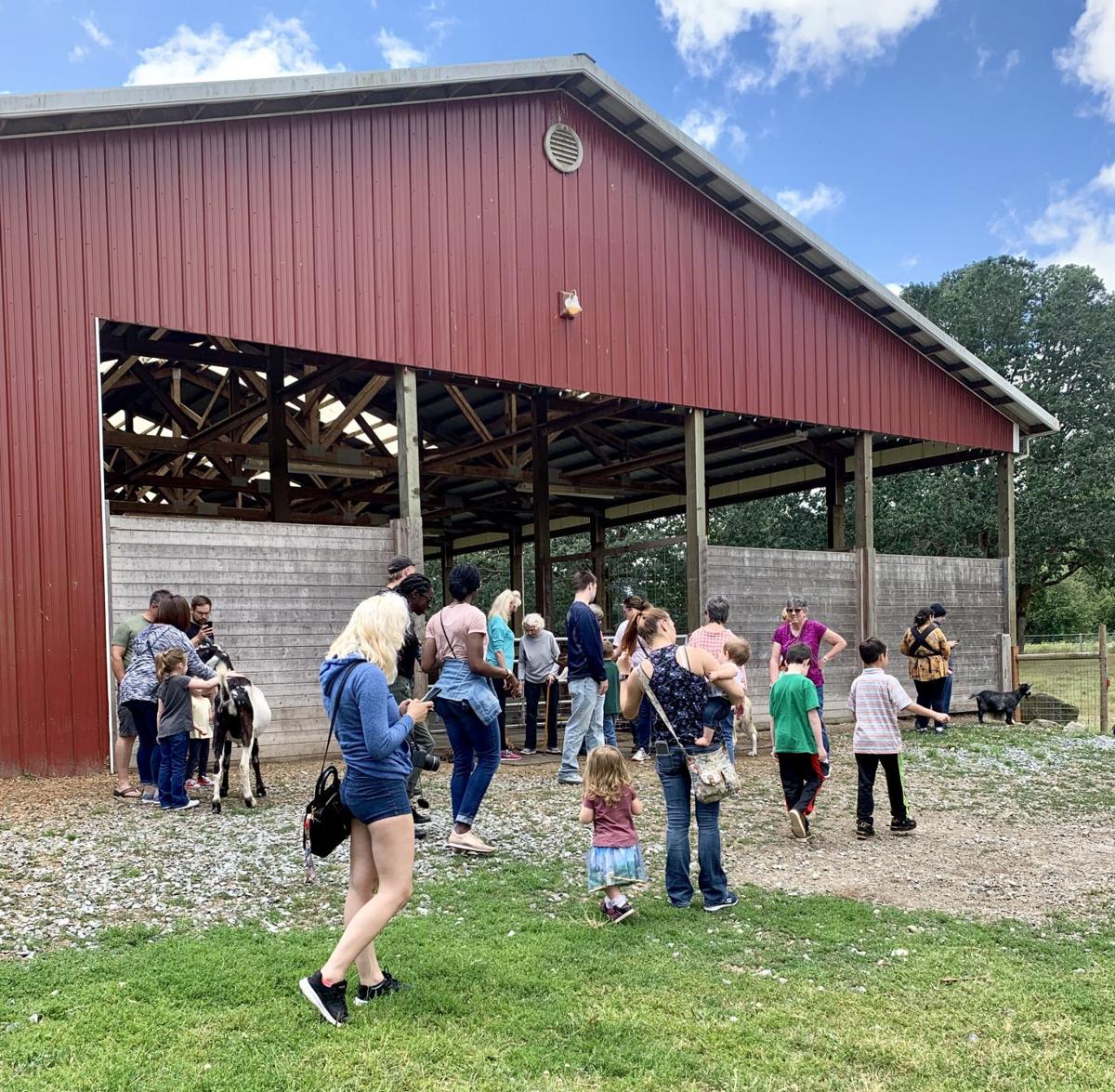 Visitors move around the grounds of Black Dawg Sanctuary in Rainier. The sanctuary is home to dozens of animals that have been neglected, abused or were likely to be slaughtered. 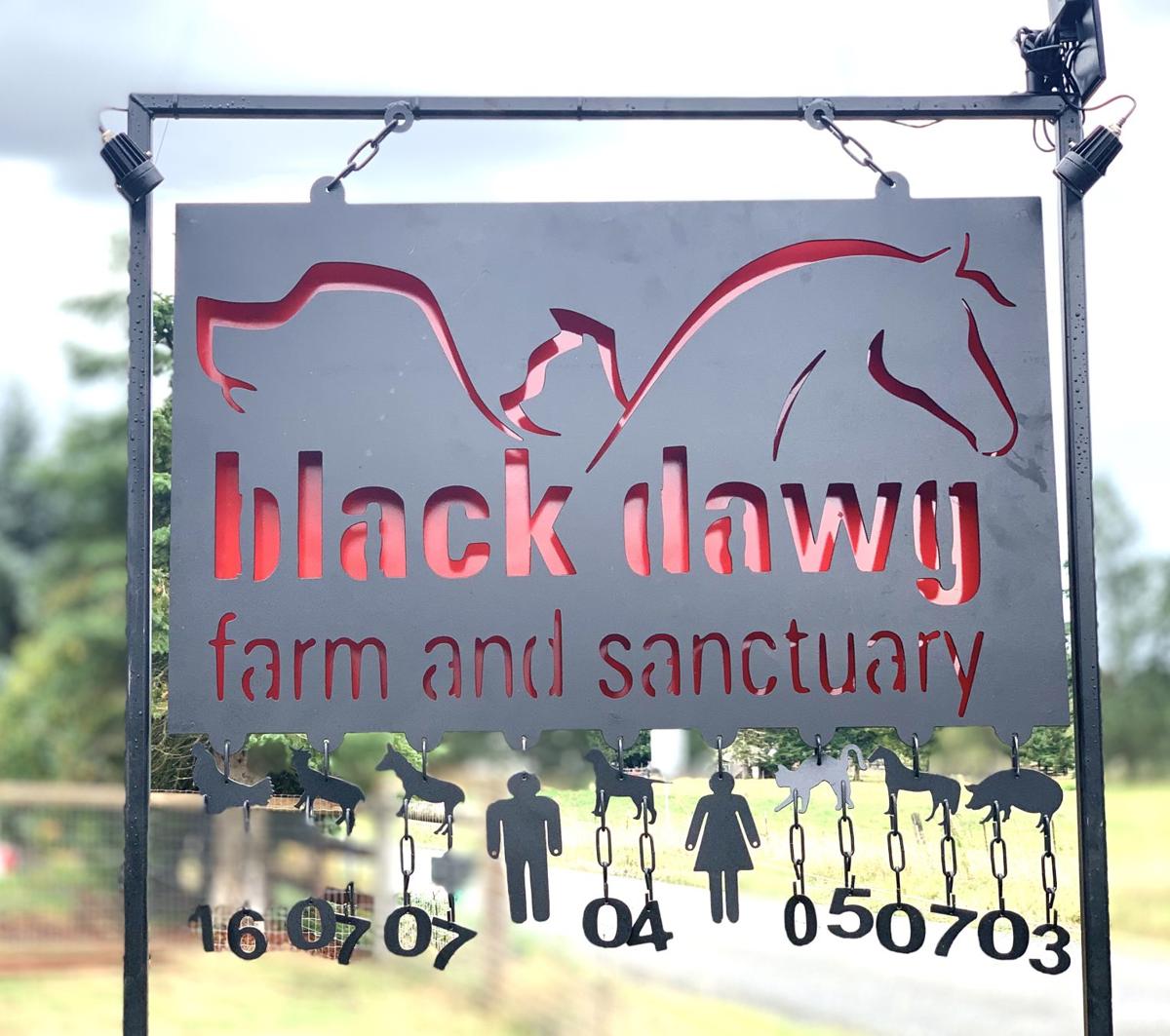 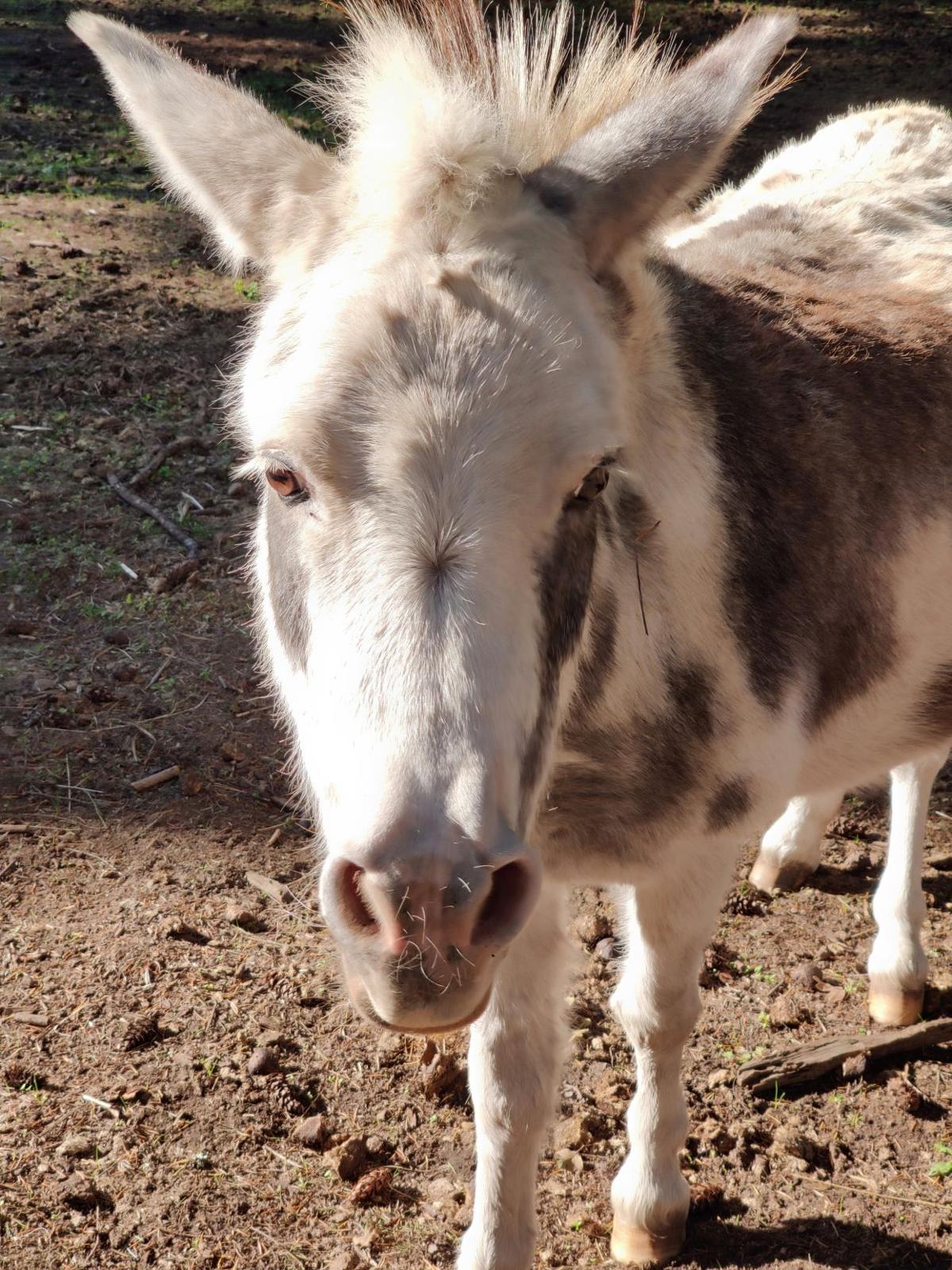 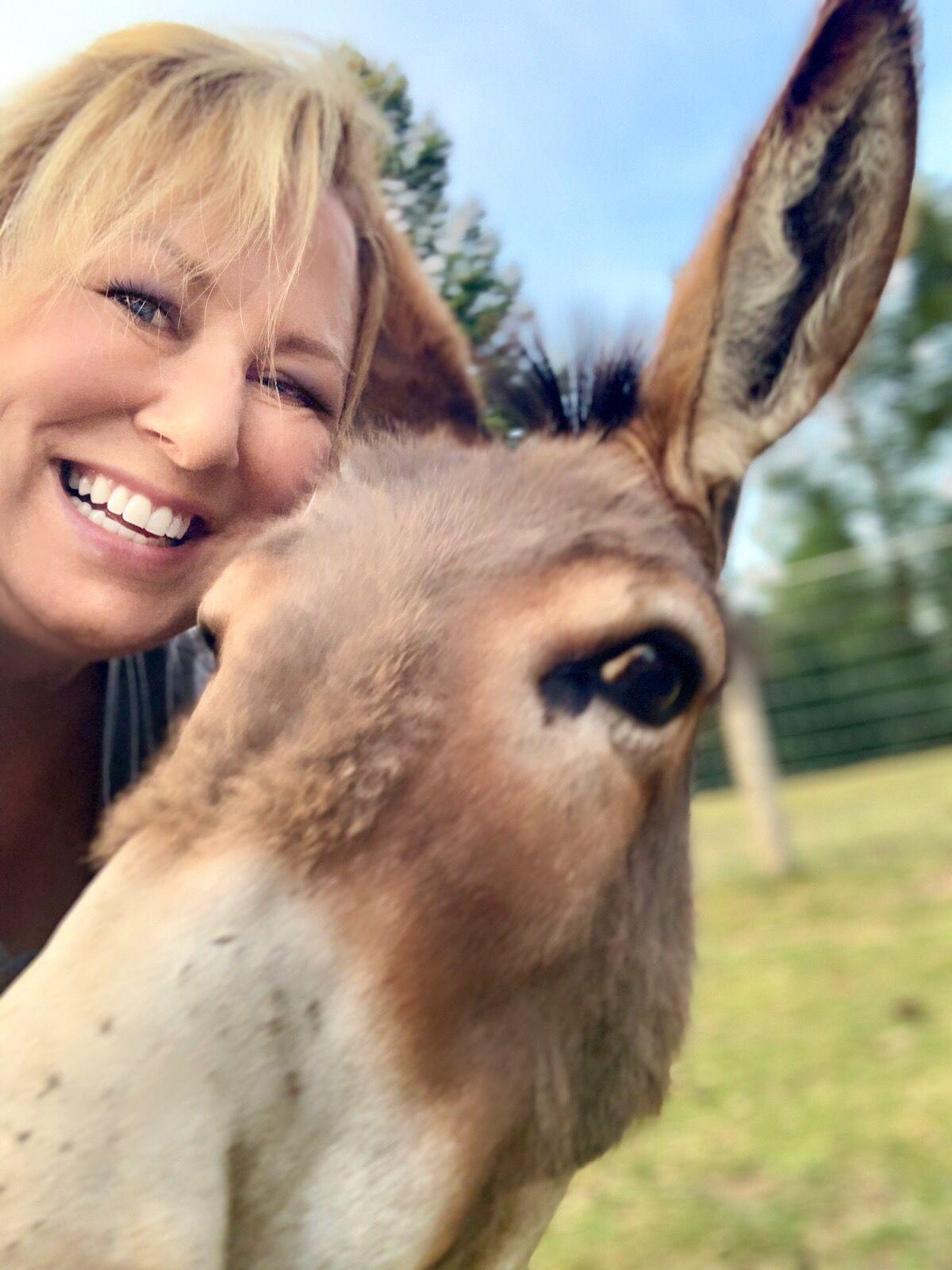 Kelly Lapham squeezes into the frame with one of the donkeys at Black Dawg Sanctuary in Rainier. 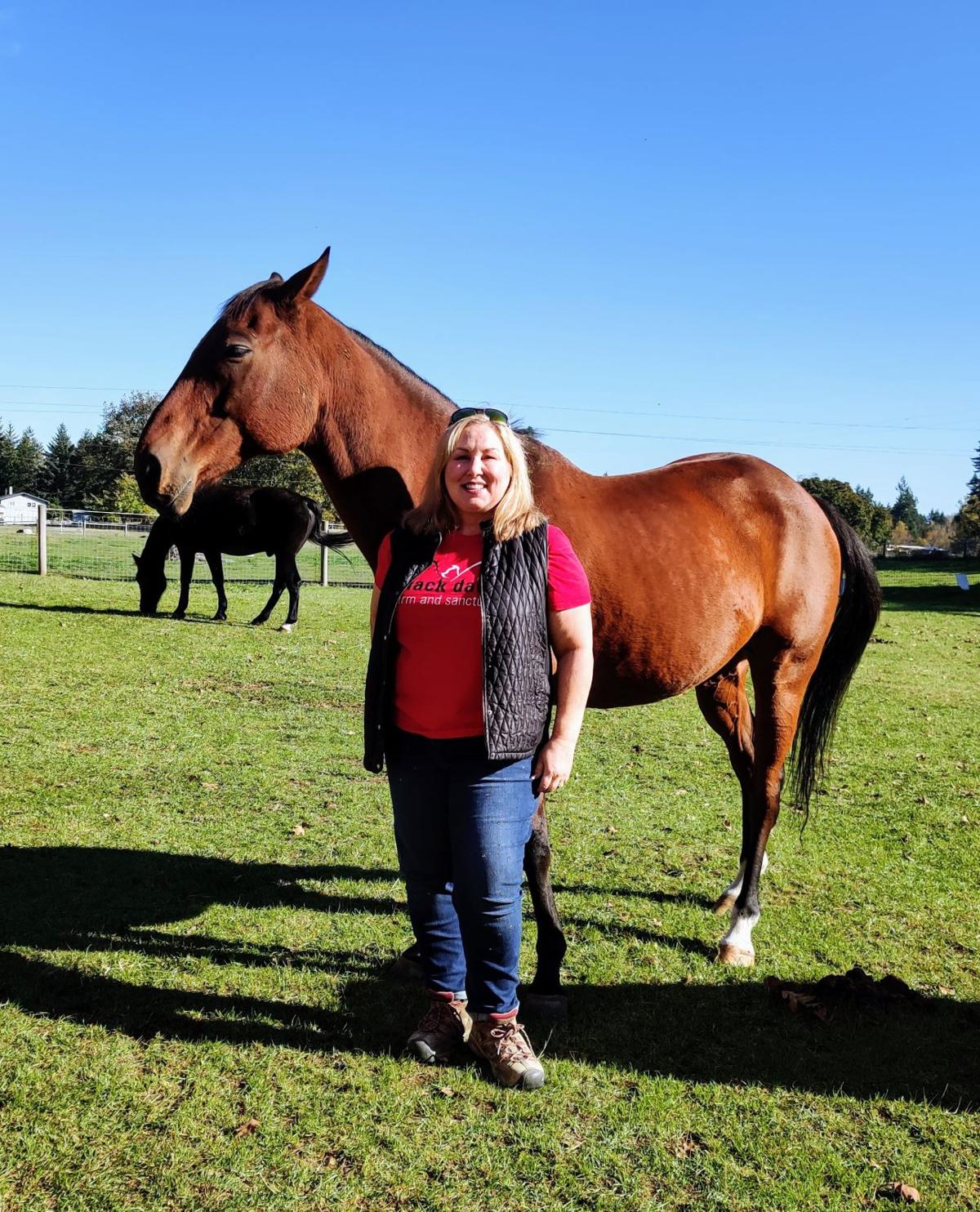 Kelly Lapham poses with one of her horses, Trooper.

(Editor's Note: This is the final installment in a two-part series on area animal sanctuaries. Part one is embedded below.)

A Tale of Two Sanctuaries: Part One — Wolf Haven

Last week I described my visit to Wolf Haven in Tenino, a refuge for several species of wolves. Next, I went to Black Dawg Sanctuary in Rainier. While the two sanctuaries share a common goal of providing a safe haven for animals, they are as different as day and night in their approach. At Wolf Haven, human-wolf contact is very rare, while at Black Dawg Sanctuary, all the animals are friendly and human interaction is encouraged.

What began in 2015 as a single effort to rescue one special horse quickly snowballed when Kelly and Tom Lapham added a second ex-racehorse named Trooper to join Sterling on their small farm. Word of their big hearts and love of animals got out and the Laphams began to get calls about other farm animals in need of a safe home to heal and live out their lives. All of the animals at Black Dawg Sanctuary came from abusive or neglectful homes or they were rescued from equine kill pens.

In 2017, when their little farm was bursting at the seams with animals, Kelly and Tom moved to a beautiful 10-acre spread in Rainier. With gentle rolling terrain and bright green lawns, it is truly an animal haven. The Laphams opened Black Dawg Sanctuary to offer a lifetime of safety and security for domesticated animals.

The refuge is named for their mascot, Sweetie, an adorable black pit bull that came from the streets of San Bernardino, California. Animals with black coloring are notoriously hard to adopt. Black Dawg’s website explains, “We realized that Sweetie was very special, that we believe her to be the perfect example and embodiment of a rescue animal. She was and is the perfect mascot for the farm. We decided at the time we officially made plans to become a Farm Sanctuary, we decided to pay homage to her and her spirit through the naming of Black Dawg.”

The vision of the sanctuary is, “To create a haven for abused animals to recover and connect with children and adults, healing through the animal-human bond, thus creating productive members of society.”

Kelly Lapham runs the day-to-day operations of the farm. She is bubbly and  intelligent with a generous smile and deep passion for her work. Kelly has a background in the veterinary field, which has come in handy on many occasions. Also an accomplished artist, she uses her creative skills in the landscaping of the sanctuary, and you’ll find bursts of color and contemplative spaces tucked throughout.

We began our tour with the horses, which were grazing contentedly around the barn. Trooper, the second horse that was rescued, stands almost 17 hands at his withers (a hand is four inches). He towers over Kelly, yet he is as gentle as could be when nuzzling for treats or attention. There are currently 15 horses of different breeds living out their lives at the sanctuary. All have had terrible pasts, and you can sense their gratitude and love.

Our next stop was at the potbellied pig pen where Elwood was snoozing in the sunshine. Potbellied pigs are much bigger than I thought. Jake and Purcella were resting in their covered stall and, since we had no treats to offer, they were content to snort at us from the shade.

Like people, animals create close bonds. The next pair we met were Bruce and Katelin. Bruce is an adorable miniature pinto horse who is totally blind but completely cute and curious. Katelin, his seeing-eye pal, is a feral miniature mule. While Katelin wasn’t interested in being petted, she stayed near Bruce as he slowly ambled closer so we could scratch his neck.

It didn’t take long for the miniature donkeys to arrive, each seeking human contact and jostling each other for affection. We stood in the big pasture scratching the donkeys when we were joined by a herd of alpacas. The group was led by Cara, a sweet, blonde female with a tuft of reddish fleece that caps her head. She graciously allowed me to stroke her soft neck before meandering away, curiosity satisfied.

The next animals we encountered have big personalities to match their large size. Two Nubian goats, Bonnie and Clyde, were among the first animals that joined Kelly and Tom. They are huge milk goats and they long for nothing more than scratches. Like puppy dogs, they followed us around their enclosure, asking for more and more attention.

Other goats, sheep, a mini stallion, chickens, ducks, and dogs graze on the grass or laze in the sun. There is a feeling of serenity there, and a sense that everything will be right in the world.

With a lovely setting, friendly animals, and loads to learn, Black Dawg Sanctuary is a great place to visit for families, friends or groups. They welcome volunteers of all ages and host educational programs throughout the year. Their sanctuary is even available to rent for family or corporate gatherings and they can accommodate up to two hundred people.