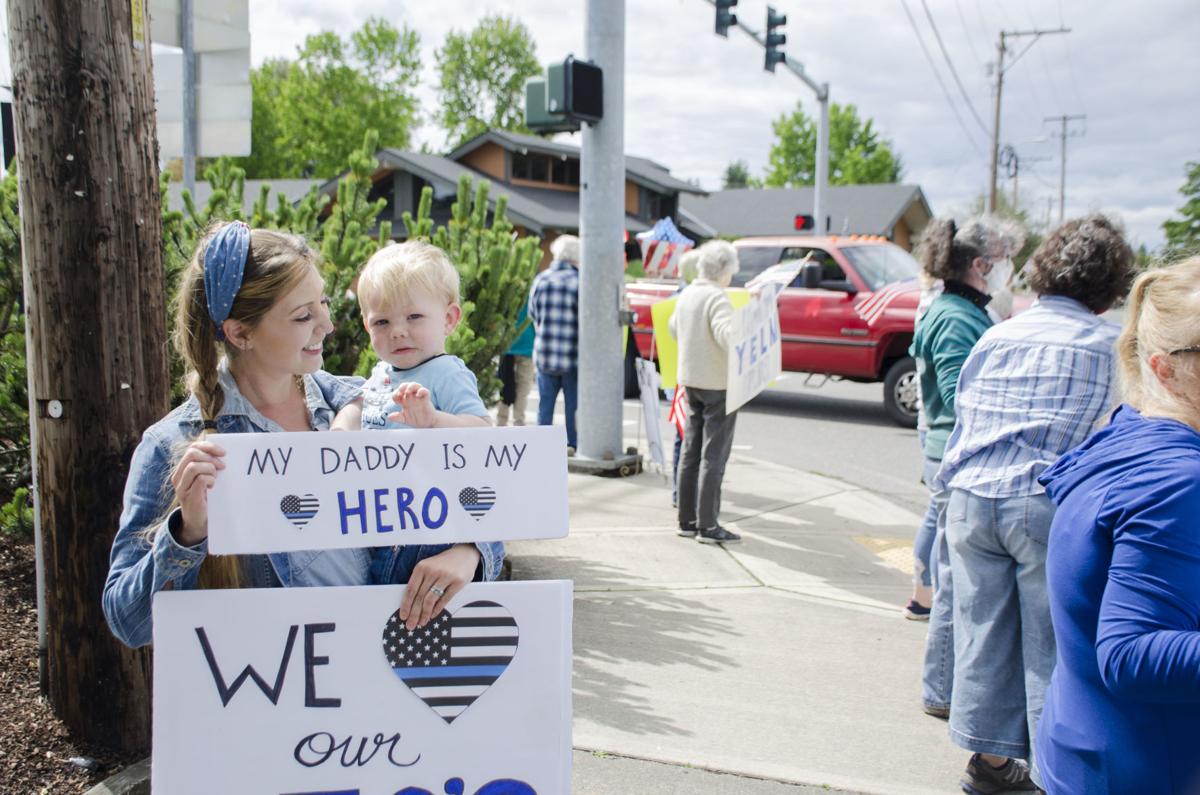 Jaci Crosby, 34, poses with her 1-year-old son, Everhett Crosby, during a demonstration in support of law enforcement on Sunday. An organizer of the event, Crosby said the goal was to come out and show support for the humans behind the badge. Their event drew more than 60 people who showed up at the intersection of Yelm Avenue and First Street. 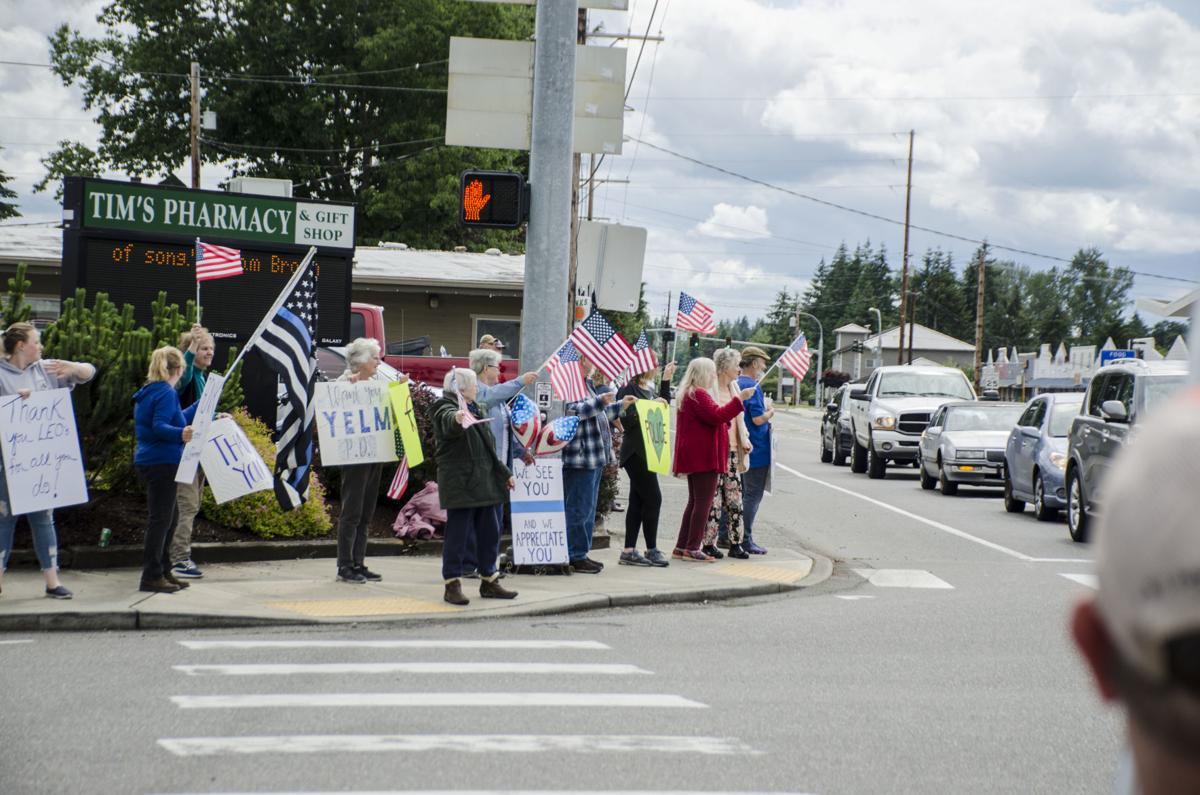 Citizens from around the area came out Sunday to show support for law enforcement agencies. Many also showed up to celebrate Flag Day. 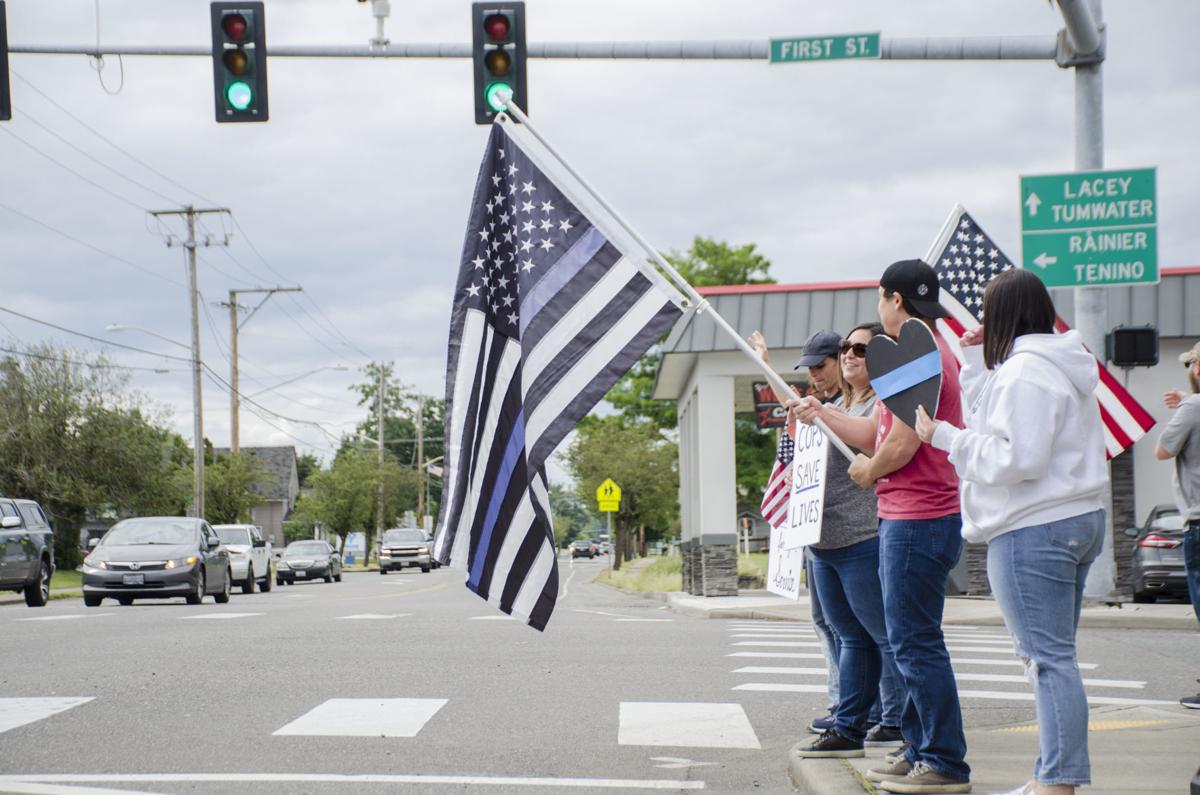 Demonstrators on Saturday gathered at the corner of Yelm Avenue and First Street to show support for law enforcement officers. The U.S. policing system has recently come under intense scrutiny in the wake of the killing of 46-year-old George Floyd, a black Minneapolis man, by the police department. 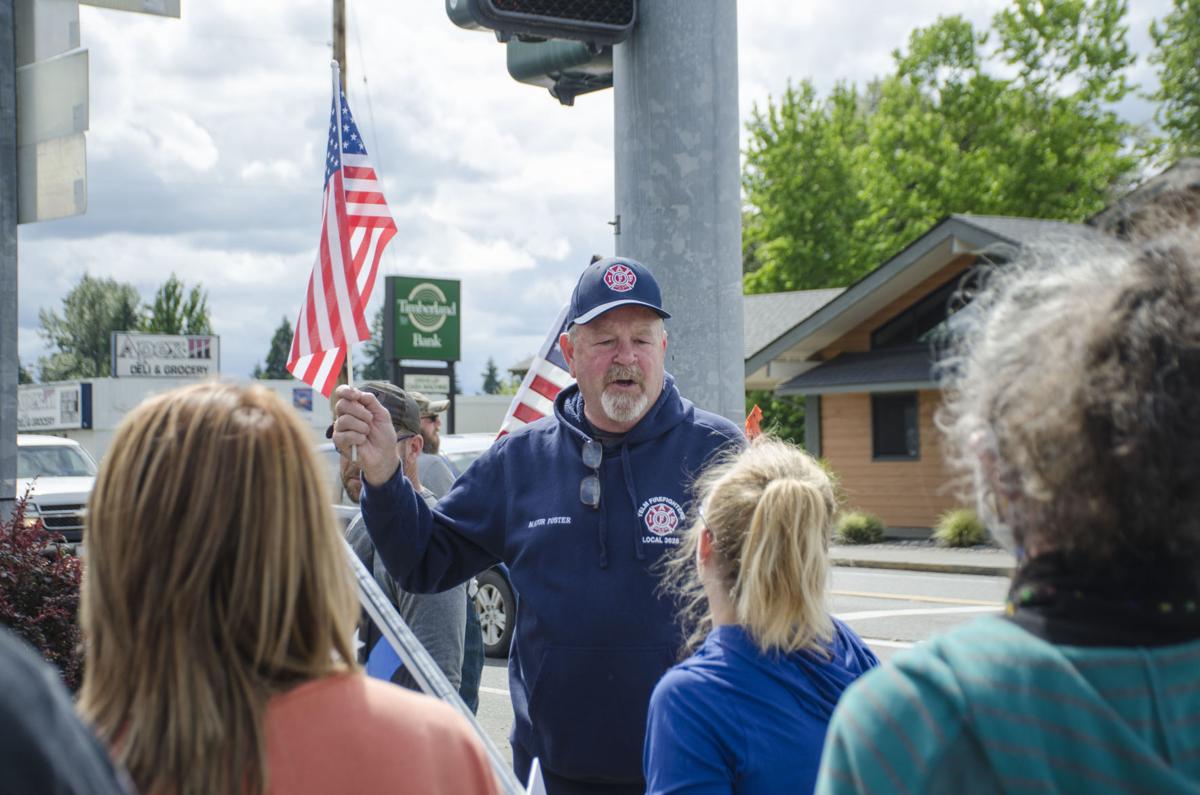 Yelm Mayor JW Foster made a brief appearance at the two-hour-long demonstration Sunday. 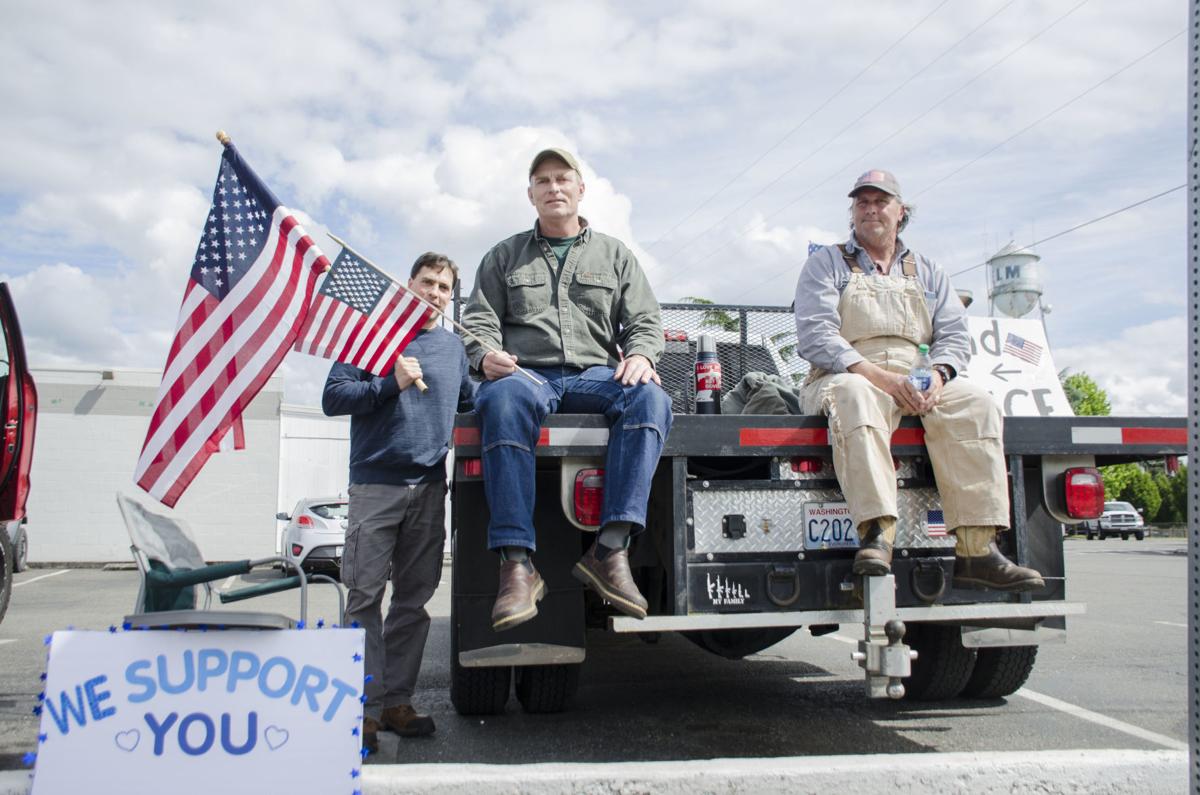 Supporters sit on the bed of a truck Sunday afternoon in the parking lot of Tim's Pharmacy. 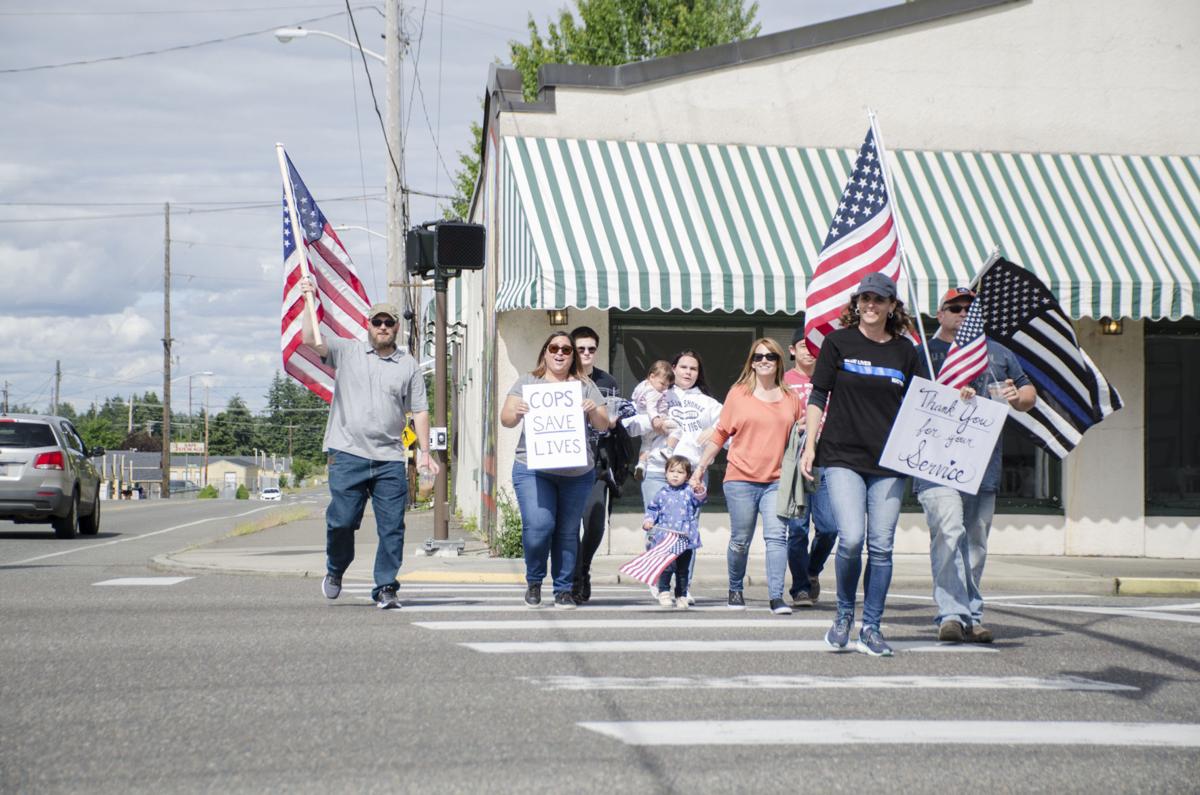 With signs and flags in hand, Back the Blue demonstrators cross the street of Yelm Avenue to merge with another group shortly before the end of the protest.

Community members took to the corner of Yelm Avenue and First Street in Yelm for about two hours on Sunday afternoon to show support for law enforcement officers and wave the American flag in celebration of Flag Day.

More than 60 demonstrators showed up to the event to wave flags and signs and cheer at passing vehicles. Mayor JW Foster also made an appearance to show support.

The event was organized by Jaci Crosby, 34, of Rainier, and her stepmother Tara Jones, 53, of Roy.

The goal of the demonstrators was to show law enforcement officers that they recognize the human behind the badge, Crosby said, especially with widespread criticism going on regarding the U.S. policing system following the death of George Floyd, a 46-year-old black Minneapolis man who died while being held under the knee of a police officer for nearly nine minutes.

Black Lives Matter protesters nationwide have been calling for a reallocation of funds from policing to community programs.

Jones, the mother of three adults who work in the law enforcement profession, said she agrees that it is time for some reform, but not the kind that has been so widely articulated by those most critical of the police.

“There’s a bad apple in every barrel,” she said, adding that Floyd’s death was absolutely mortifying.

The two said they were surprised with the amount of support they had with their demonstration. A constant barrage of vehicle horns blasted from every turn of the four-way intersection.

“Mostly, we just wanted to let law enforcement know that we see them and hear them,” said Crosby, the wife of a Thurston County Sheriff’s Office deputy. “We’re not here to put anybody down, we’re just here to lift them up.”

The event, named Back the Blue on Facebook, is part of a larger public awareness campaign in support of officers nationwide.

“Our aim is to boost morale among law enforcement officers who feel dispirited by the increasing negativity barraging the badge and what it stands for,” details for the event’s Facebook page read. “To show them our love and support in a time when so many of our officers have been met with violence and hatred.”