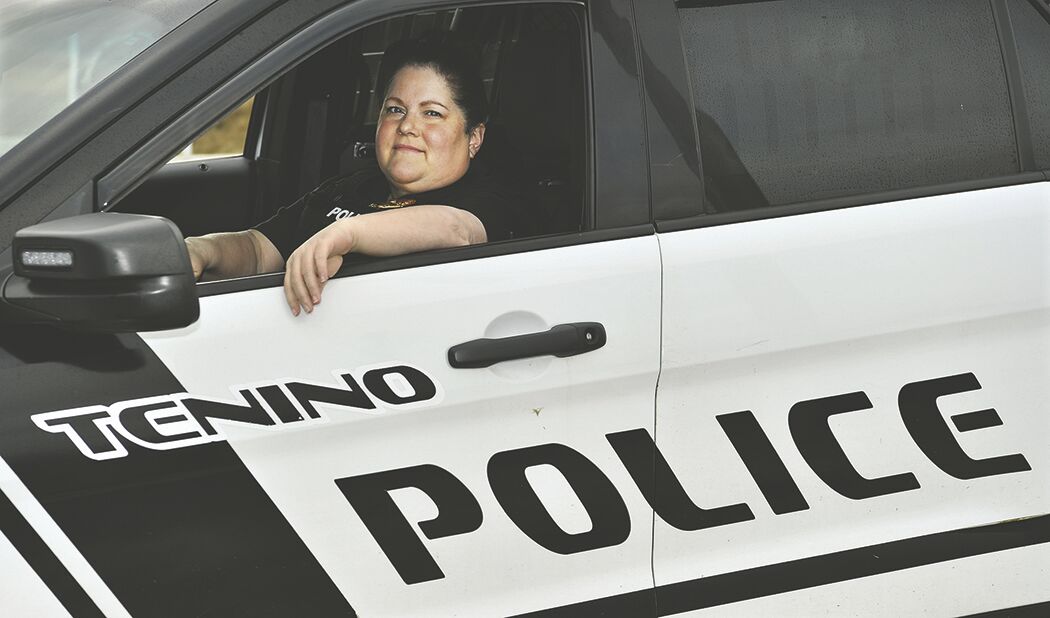 Recenty hired Tenino Police Chief Kristi Lougheed has spent much of her first three months on the job getting acquainted with her staff and community and looks forward to doing more patrolling as her administrative duties allow her. 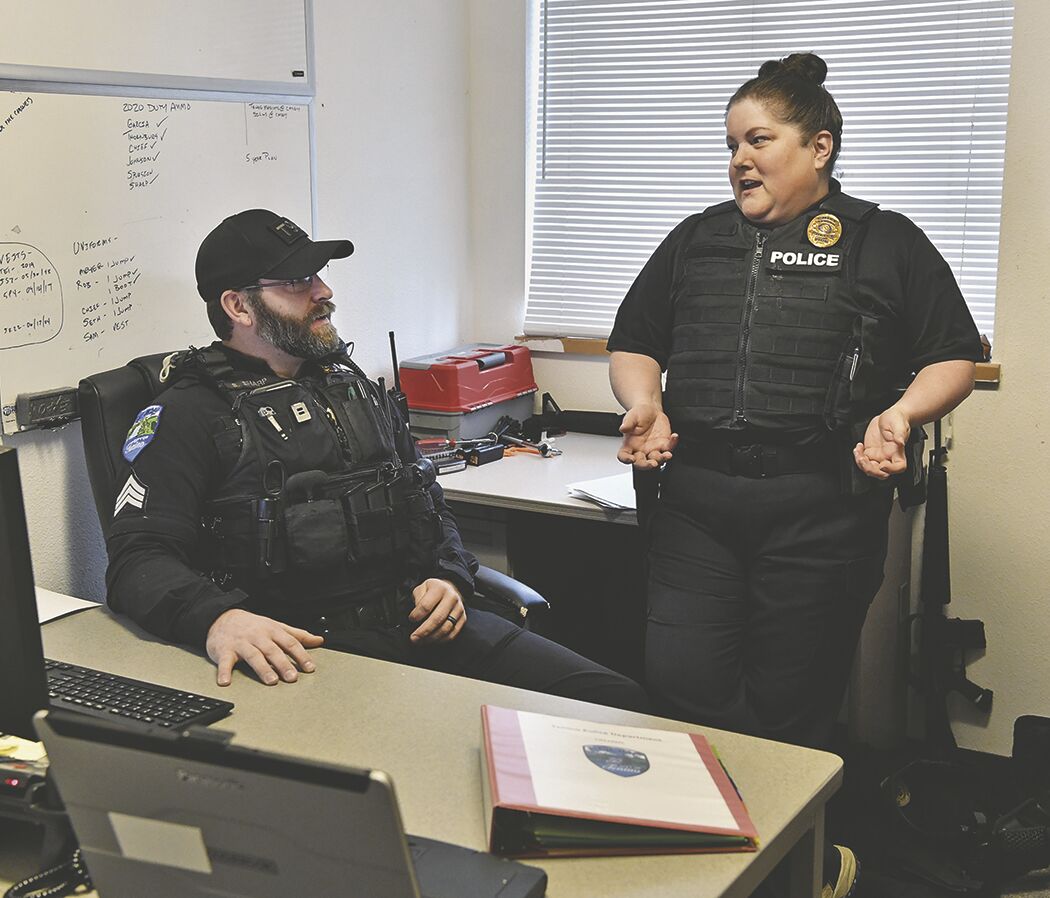 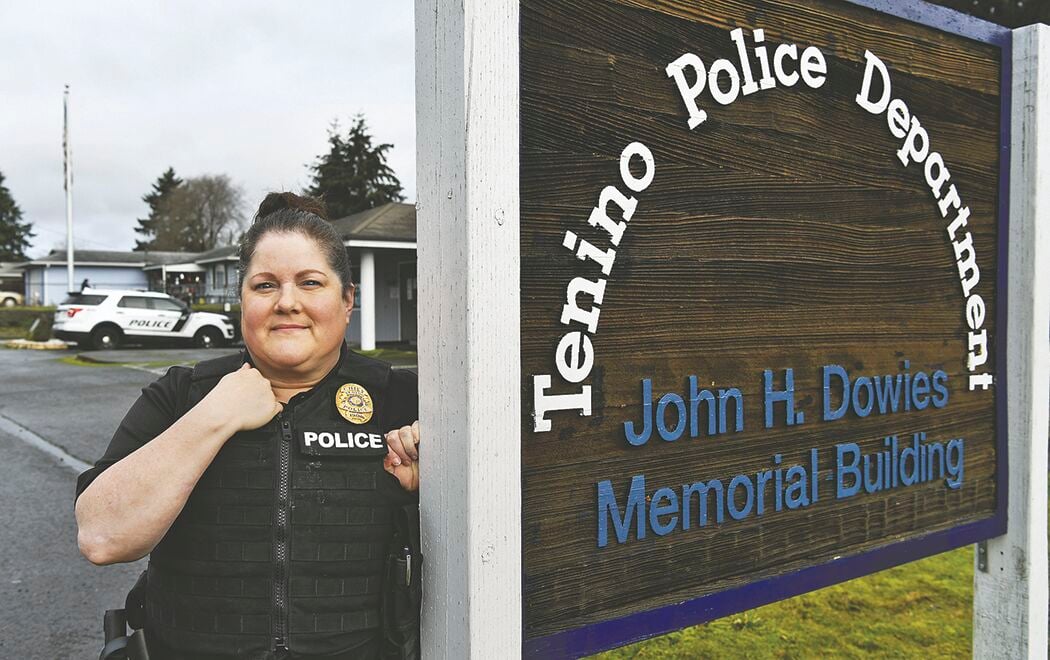 “The crazy never seems to go away.”

Those are Kristi Lougheed’s words.

She’s speaking last week from her office in the Tenino Police Department where she took up residence recently as Tenino’s new police chief — and, according to the city, became the first female police chief in Thurston County history.

And she’s a little bit, well, nuts about her job — but in a good way — in the same way, for instance, you might ask a question, hear the answer, and think, “You know, that’s just crazy enough to work!”

If first impressions are any indication, the 51-year-old is enthusiastic, dedicated, friendly and professional — the kind of crazy that just might work in the Stone City.

“This job kind of becomes a big part of who you are, and it was hard to walk away,” she said last week from her cozy abode in the Tenino Police Department. “I guess it’s in the blood.”

Lougheed, sworn into office in mid-October by Tenino Mayor Wayne Fournier, had been talking about her 26-year law enforcement career and how it had come to an abrupt halt on Oct. 1, 2019 — perhaps never again to be pursued.

At least she thought.

She’d been a detective and patrol officer at the Aberdeen Police Department for the previous nine years when a certain feeling began stealing over her that became harder and harder to ignore.

She was burned out, plain and simple.

“In investigations (for the Aberdeen Polie Department) I had a lot of cases involving children — sexual abuse, physical abuse, neglect — and I just burned out,” she said. “I decided I was going to do something completely different.”

It didn’t help her stress level that during her tenure in Aberdeen, Lougheed perservered and subsequently won a lawsuit in 2017 against the city of Aberdeen claiming she had been hired and paid at a lower rate than her male counterparts, which violated state law.

“That was a really hard three years in Aberdeen,” she said. “But I’m very proud that my case can now be used as a precedent for future cases.”

So after this boatload of stress finally sunk her law enforcement enthusiasm, it was, indeed, time for a change, and a desk job seemed like a good place to start.

And that was OK for a while … at least she didn’t have to wear a gun.

But when Fournier — a firefighter with the Aberdeen Fire Department who’d known Lougheed for 10 years — contacted her about the open police chief position, Lougheed’s cop juices suddenly ran like water over a dam.

“Wayne contacted me and said, ‘I know you’re doing something else now, but this opportunity is available,’ and so I put in my application,” Lougheed recalled. “I knew I could do the job, but I was surprised how fast the desire came back, and I really wanted to return (to law enforcement.)”

The police chief position had become available after Chief Robert Swain, 60, left the department in early September before his official retirement. He died on Sept. 20 from stage 5 kidney disease.

Swain’s death — and the fact he had participated in Lougheed’s job interviews — played into Lougheed’s psyche as she considered whether to accept the Tenino job.

“I knew how much the community respected and cared for him (Swain), so I knew I had big shoes to fill,” she said.

But becoming the county’s first female police chief didn’t cause her a moment’s indecision. Her women’s size shoes would be plenty big enough, she figured.

“I think it’s weird that Thurston County hasn’t had a female chief, yet,” she said. “But ultimately it doesn’t matter. The only criteria is if you can do the job effectively.”

And so far she’s doing just fine, said Sgt. Seth Sharp, who along with two patrol officers, three reserves and an administrative assistant round out Lougheed’s police crew.

“She’s (Lougheed) completely honest, doesn’t beat around the bush, and tells it like it is,” said Sharp, 42, who’s been with the TPD for a bit less than three years. “She’s listening to us about what we would like to see changed or keep in the department, and she seems very interested in getting to know the people in the community.”

“I’ve been getting together with the employees and figuring out where we want to go and how to get there,” she said. “I have been so impressed with the training and experience of the people here for such a small department,” noting that every TPD officer has completed field training officer school in firearms instruction and defensive tactics.

The department’s camaraderie has also impressed her.

“Just getting to know the employees here is much like a friends and family situation,” she explained. “I appreciate the way they take care of each other, and I want it to be a place where people want to stay despite not being able to offer the largest wage package.”

Though she’s on call every night “for whatever comes up,” administrative duties have consumed much of Lougheed’s early days on the force, so she hasn’t had chances to get out as much as she’d like.

“I haven’t had much time to do actual policing in the community, which I’m really looking forward to,” she said. “From talking to people, I know that the support for the police department is pretty strong.”

Lougheed’s interest in community policing could partly derive from her upbringing and longtime relationships with people in Western Washington. Plus she’s gregarious, which could pave the way for strong community relationships.

“I have an easy time talking to people,” she said, smiling. “I was a bartender for two years before becoming a cop and learned how to talk to anybody, regardless of their state of inebriation. It was great training.”

Growing up in a small city may have helped, too.

Lougheed had lived her whole life in Aberdeen until 2 ½ years ago when she and Jason Lougheed, her husband of 28 years, moved to a home on 7 acres near Tumwater. The couple have a son, 20, and a daughter, 22.

Jason, a construction foreman who works in Seattle, possesses just the right mix of qualities to sustain a successful marriage — and to a cop, no less, Kristi said.

“He’s been married to me for 28 years, so he’s very patient and tolerant,” she said with a laugh.

In addition to her husband and children, Lougheed’s also blessed to be surrounded by other family members. Her parents, both in their 80s, live in a Lacey retirement home, her older sister lives minutes away in Tumwater and her older brother lives in Port Angeles.

Lougheed, who earned a bachelor’s degree in human resources management in 2016 from Western Governor’s University in Salt Lake City, has kept the Western Washington homefires burning throughout her career. Before the Aberdeen Police Department, she worked for a year as a police officer at the Cosmopolis Police Department and before that spent 14 years as a deputy sheriff at the Grays Harbor County Sheriff’s Office.

And now she’s immersed in her newest adventure, just taking things one day at a time.

Said Fournier: “Chief Lougheed is settling in nicely and developing a good rapport within her department. This is an atypical time for our city, and I look forward to things opening up and for more people to get to meet her.”

Getting rid of COVID-19 would certainly help the new police chief interact with constituents. But the encounters these days are constrained. Citizens may currently make appointments to see police officers, but the TPD building — like many  other municipal facilities in Washington towns — is closed to the public.

Lougheed has missed that citizen interaction, and from a personal standpoint is suffering from coronavirus fatigue just like everyone else on the planet. She longs for a normal existence — going out to dinner, drinking an occasional beer at a tavern, and most importantly visiting her elderly parents.

But the virus, itself, doesn’t necessarily scare her as it does others.

“Maybe I have a different threshold for being scared,” she said. “And, I’m very happy that we have a vaccine.”

What has unnerved her, however, in this era of COVID-19 is the racial unrest she’s witnessed since the May 25 arrest and death of George Floyd by Minneapolis police officers. The brutality of the incident horrified her.

“When I see someone on the ground with a knee on his neck, that makes me physically ill as a human and as a police officer,” she said. “I don’t want to be painted with the same brush as the guy who did that. The racial unrest was definitely a consideration as to whether I wanted to return to law enforcement at all.”

But now that she’s back in the fold, it’s clear what she and her fellow officers must do: “We need to listen and hear what people are saying and try to understand it,” she said. “I think there are things we can do better in law enforcement, and there are issues we need to treat with the amount of urgency they deserve. But if we think we’re doing something well, we need to let people know why we’re doing things that way.”

And being a female cop can be an asset, especially when potential conflicts arise.

“I have very few physical confrontations with people,” she said. “I’ve noticed that in my interactions with male suspects it’s less confrontational with females. Sometimes when suspects see a male officer they want to prove how macho they are, but they don’t have to do that with me.”