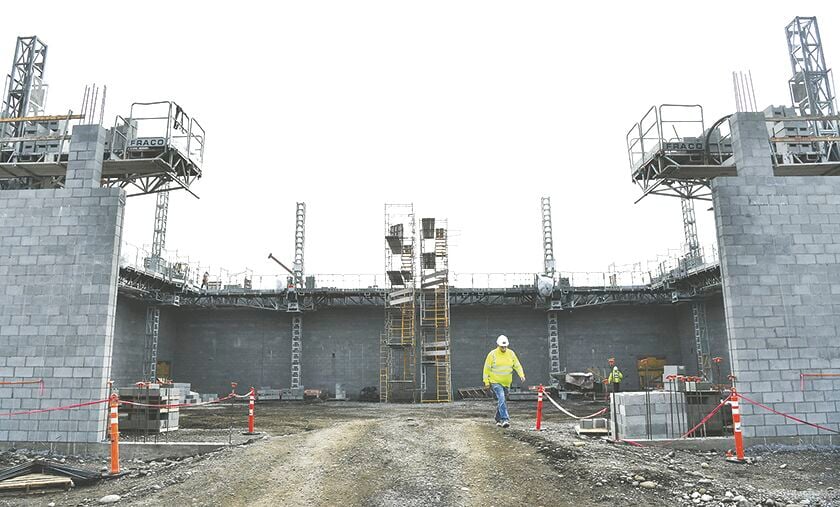 A construction worker walks out of what will be the new gymnasium, auxiliary gym and locker room building on Friday, Oct. 2, at the new Yelm Middle School site. 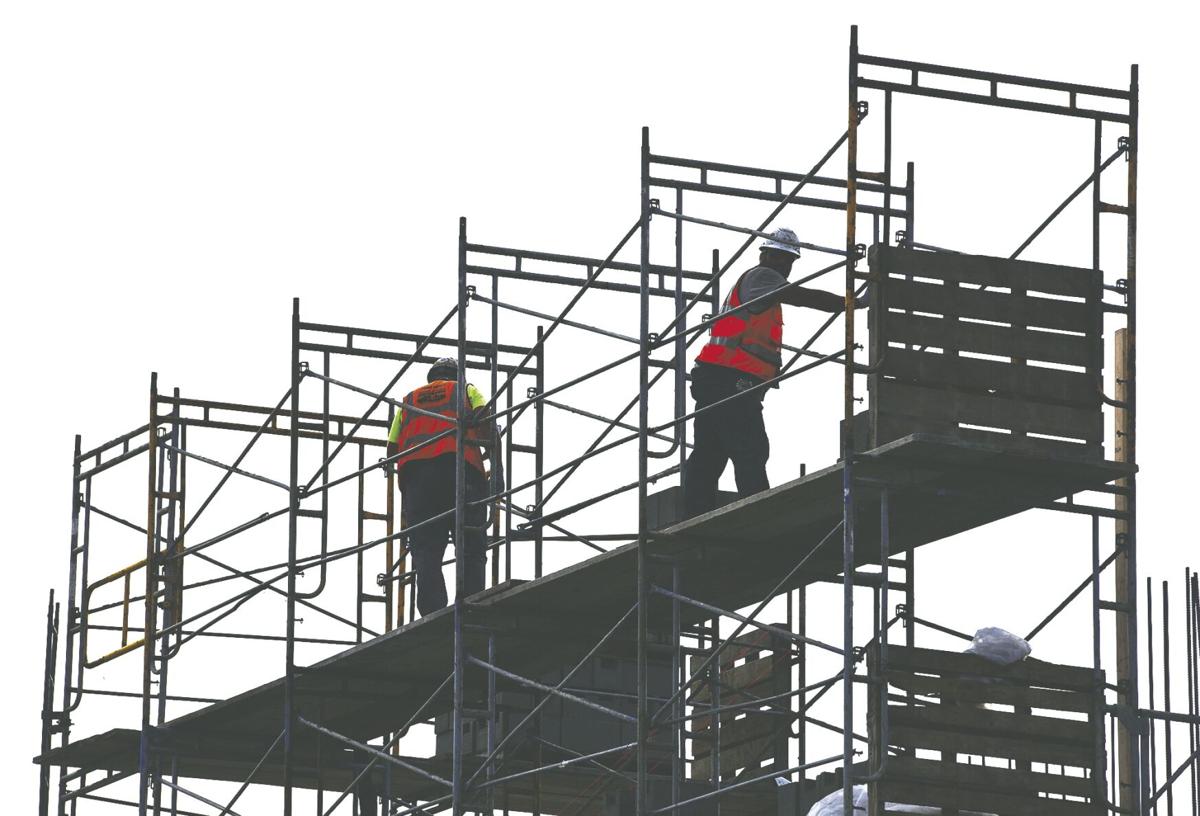 Construction employees silhouetted against a foggy sky work from scaffolding on Friday, Oct. 2, at the new Yelm Middle School site being built close to the current middle school. 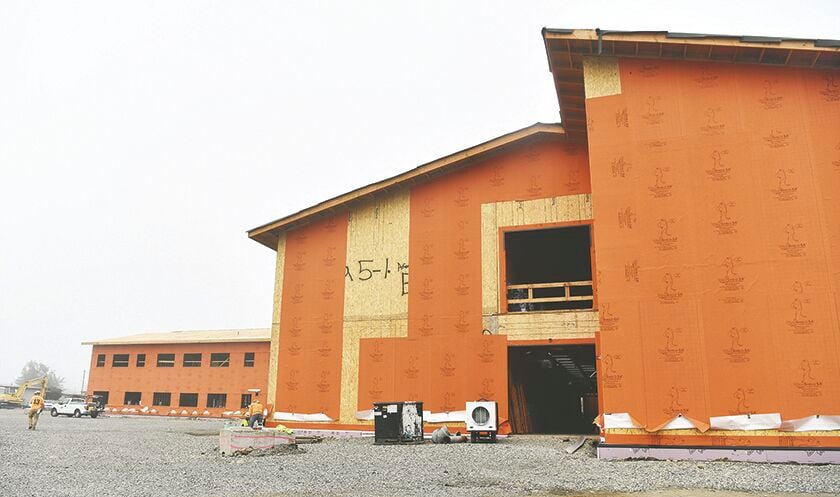 This view shows the classroom B section of the new Yelm Middle School site at right and classroom section C at left. 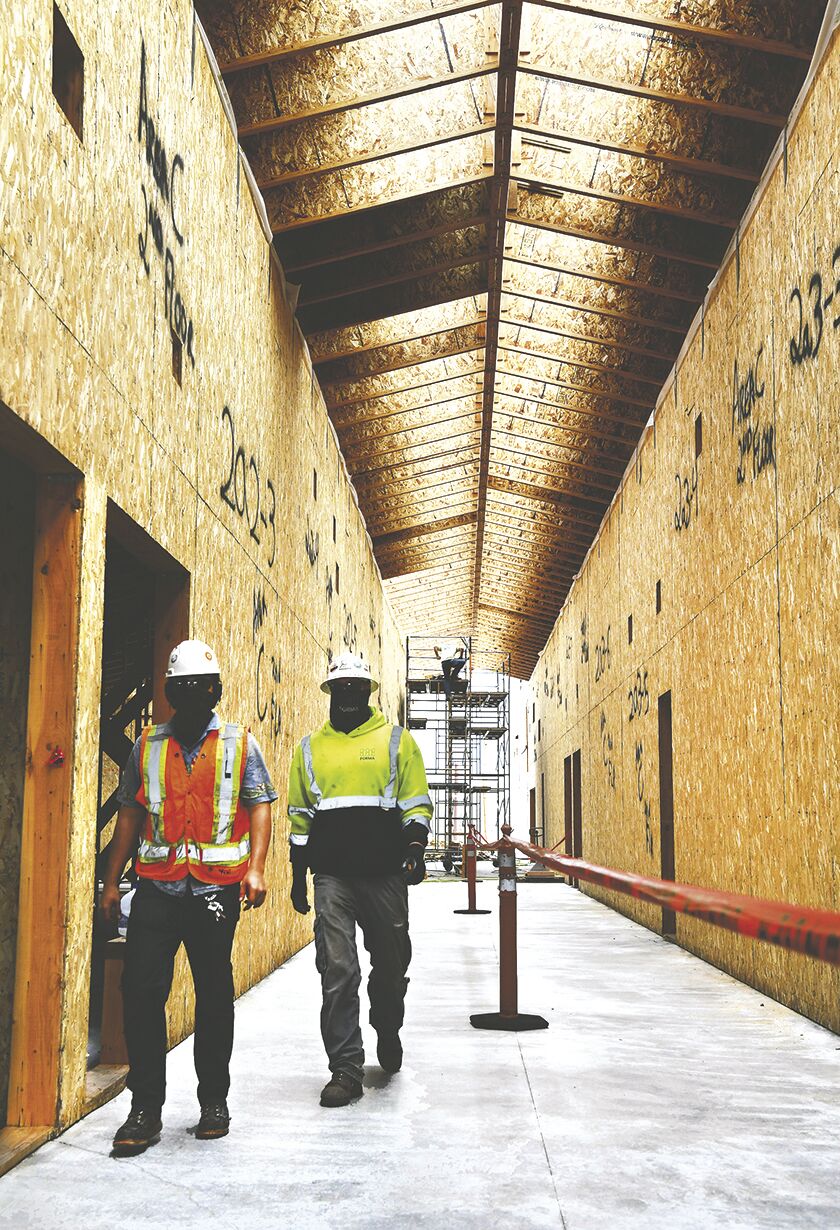 A couple of construction workers walk along the hallway of classroom wing C at the new Yelm Middle School site on Friday, Oct. 2. 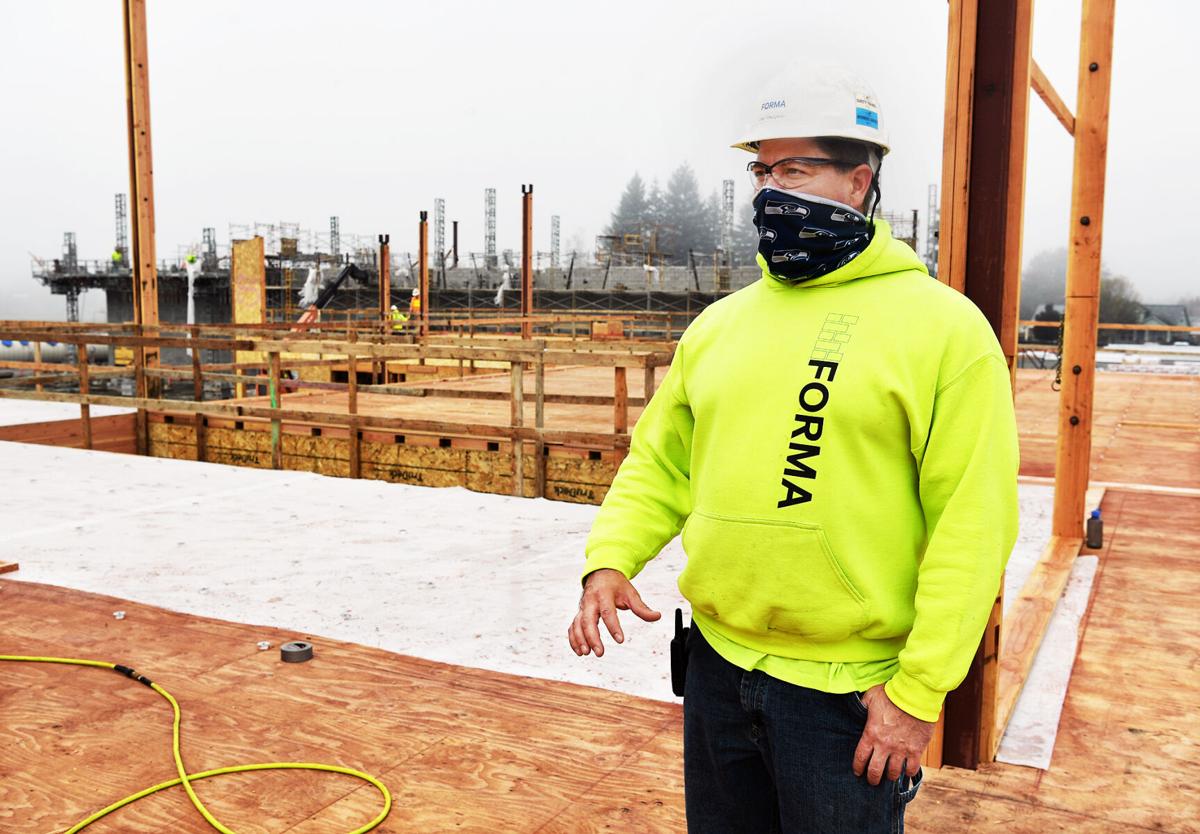 Dan Tonsgard, Forma Construction superintendent, stands on Friday, Oct. 2, on what will be the library at the new Yelm Middle School.

Construction workers cross in front of the main entrance to the new Yelm Middle School site on Friday, Oct. 2.

The structure is about 20 percent complete, officials from FORMA Construction and the school district said during a Friday, Oct. 2, site visit.

“It’s going as planned. That’s pretty much it,” Dan Tonsgard, superintendent of construction with FORMA, said from the interior of one of the school’s classroom wings.

The Nisqually Valley News was previously on site in late July. In the two months since that visit, the construction company and its contractors have been able to complete the building shell of the school’s two primary classroom wings — Sections B and C — and have been able to make headway on the gymnasium.

Tonsgard and Bond Project Manager Kasey Wyatt both said the project remains on time and on budget. The classroom wings, Tonsgard said, are ahead of schedule by about six weeks.

The project to rebuild Yelm Middle School is largely split into five sections: Section A consists of the administration block and library, located in front; Section B and C are the classroom wings, with each hosting two floors of learning environments; Section D consists of the kitchen, band and information technology blocks; and Section E is the main gymnasium, auxiliary and locker rooms.

Roofing on the gymnasium is expected to start around December, with the whole building expected to be a “dry box,” meaning it keeps the interior dry from the weather, around the end of the year.

“Weather-sensitive things, like drywall and insulation, need to be done after we’re all dried in,” Tonsgard said.

The new Yelm Middle School’s theme will revolve around the Nisqually Indian Tribe’s canoe journey, while also featuring aspects of the native people’s history and Yelm history. The advantageous location of the 100,000-square-foot facility will allow great views of the Nisqually Valley and Mount Rainier from the second floor.

Yelm Community Schools Superintendent Brian Wharton, who visited the site briefly the day before the newspaper, said he was really impressed by the size of the hallways and how the building, which will eventually serve around 725 students, is coming together.

“We’re really happy. It’s really fun to see the design come to fruition. We really appreciate our FORMA team. It’s been obvious throughout this process that they know how to build schools, and it looks really good,” he said. “It feels like there’s good flow and good space for kids.”

The school is expected to be finished in the summer 2021, and Wharton said it’s estimated Yelm Middle School staff will begin moving into the building sometime toward the end of this school year.

The bond that was passed in February 2019 will also pay for the Southworth Elementary rebuild and districtwide safety upgrades, which Wyatt said are nearing completion.

Tonsgard on Friday said that there are currently anywhere from about 40 to 50 contractors and workers on site.

Since the start of the school year, all Thurston County public school districts have been teaching kids remotely, though many districts are now moving forward with allowing younger, elementary-age students to return to school facilities by way of a hybrid model.

It’s currently unclear what impact — if any — the COVID-19 health crisis will have on the planned moves next year.