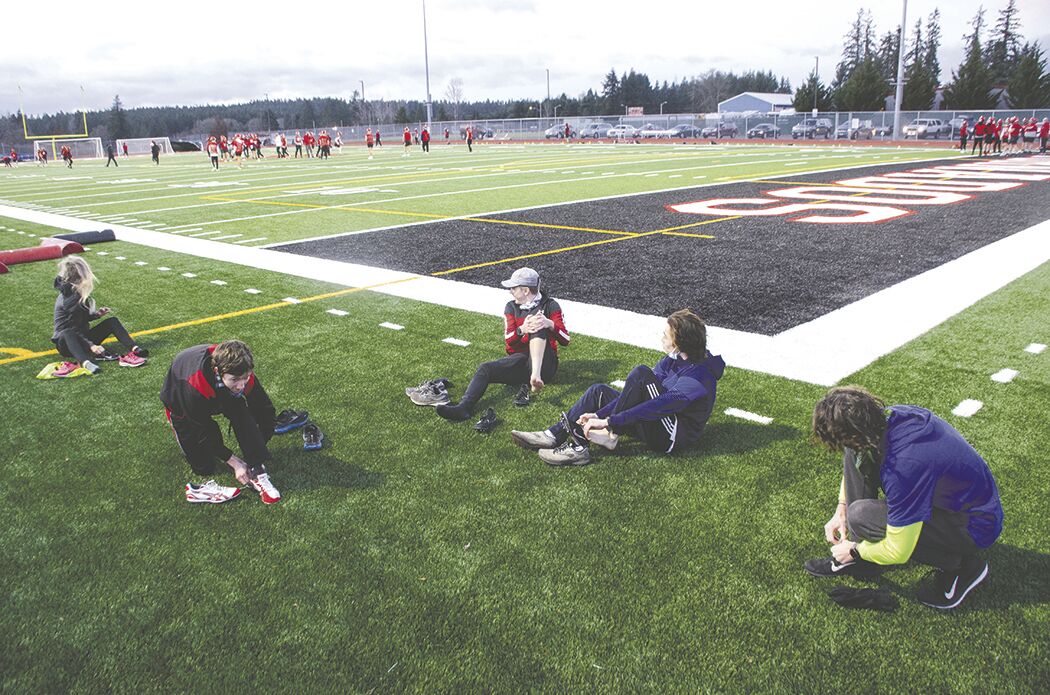 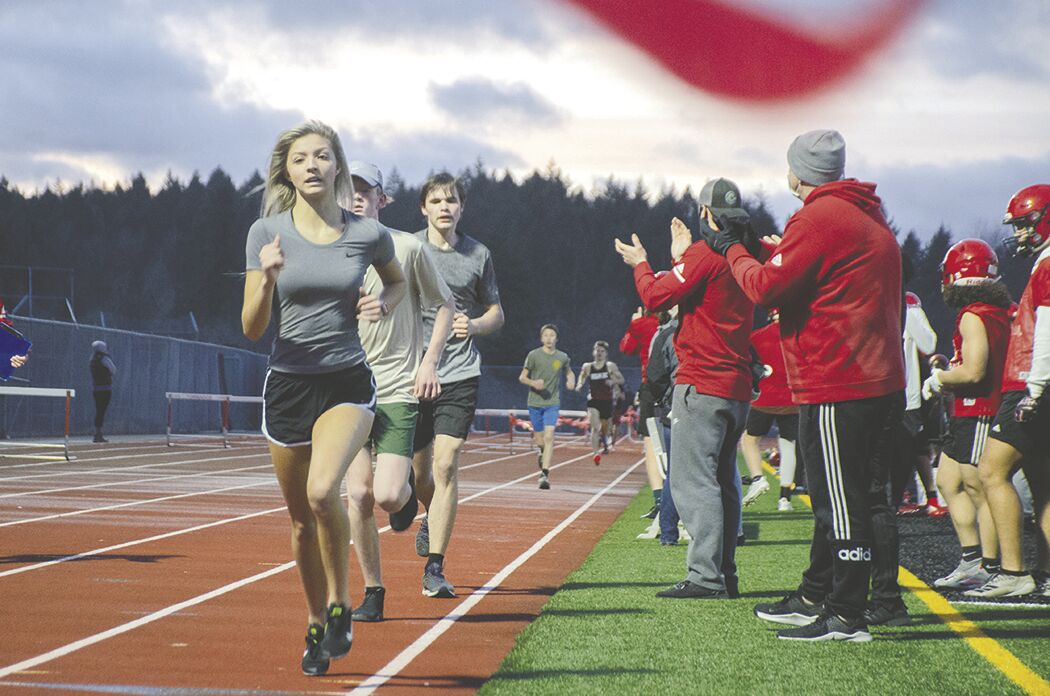 Senior Kya Ramirez, sophomore Gabriella Willadsen and junior Clare Lawlor will return to the course this winter on a nine-girl Lady Tornados team. The girls last season placed seventh as a team at the SSC meet, with Willadsen, Ramirez and then-sophomore Kaylee Faber going on to run at the Westside Classic District meet. 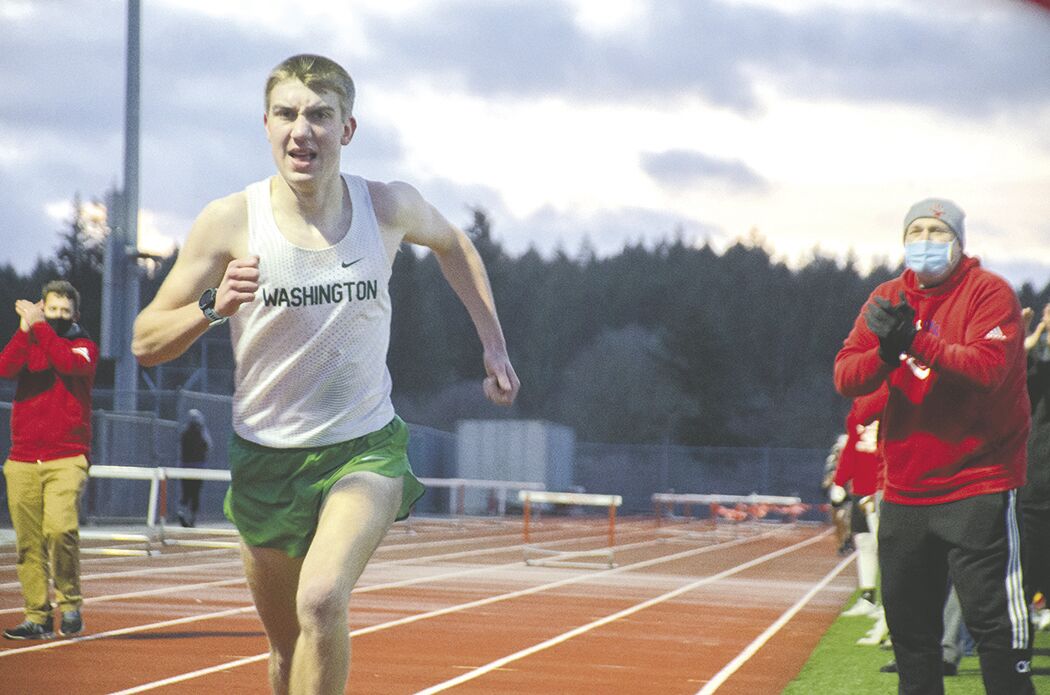 The Tornados had what appeared to be a fairy tale run in the making.

The team of runners was looking last year to reclaim the South Sound Conference championship and make a return to the Washington state cross country championship meet, with hopes of besting the seventh-place result from the year before.

But now, it seems, only one of those goals is attainable.

With the state meet this year canceled due to the ongoing COVID-19 pandemic — and with a season already two dozen weeks past due to start and only half as long — the Yelm Tornados this year will look for new ways to measure themselves against a local conference they’ve already topped while making gains from the back end of their lineup.

Both the boys team — the best ever in the school’s program, up until this point — and the girls have healthy returners who have been working through the difficulties of 2020 and are raring to tear up the course.

The boys, with 21 runners, will return five of their top seven runners this year — those are five of the best runners Yelm’s ever had, according to Head Coach Alex McIntire, who emphasized that the next six weeks will be about having as much fun as possible and taking advantage of every opportunity to run.

“I think that the times will do the talking and I won’t really need to. But yeah, they’ll be the strongest team I think Yelm’s ever had,” McIntire said, adding that with “the amount of dedication and training, they just haven’t stopped.”

Yelm’s program over the last couple years has grown into something of a powerhouse through a fast-developing culture that’s stemmed from this senior and junior class. McIntire attributes the boys’ recent successes to their pack-centric training and running, as well as the support from parents and the community.

They also haven’t stopped. In a community ravaged by the pandemic and financial woes, perhaps at times the most consistent thing running through Yelm has been the Tornados.

Seniors Kelan Herness and Bryce Cerkowniak will lead the team this year. The duo have been running up against each other since middle school — Herness from Ridgeline, Cerkowniak from YMS — and have quickly established themselves as two of the best runners in the district.

Herness during the 2019 season placed fourth at the South Sound Conference championships, with a 5,000-kilometer time of 16:29; he’s since improved his personal best 10 seconds lower.

In December, during a time trial event the boys and girls team hosted, Cerkowniak praised the team and coaches, saying that this year’s culture was by far the best in his four years at Yelm.

“This team wants to be the best it can be, they work for each other,” Cerkowniak said then. “Once we get into a race with those other teams, I think the work will really show and I think that’s the most important part.”

Cerkowniak says he’s been feeling confident about him and his team’s ability this year, too. Back in September, he told the Eli Sports Network about solo practicing during the pandemic: “I just took what I knew and I just applied it to working by myself. It’s been working very well for me, and I’ve been doing that throughout the summer, and I’m feeling pretty good going into my senior year. I feel like I’m in the best possible shape going into my senior year, too.”

Junior Ethan Coon, another rising star runner, noted in December that they’ll have a big leadership gap to fill this upcoming fall after Cerkowniak and Herness graduate. Coon looked solid in December running against his teammates, besting Herness by a mere 4 seconds in the mile-long time trial.

With a 16:53 5K personal best recorded his sophomore year at the SSC championships meet, it’s easy to see Coon stepping up to help fill that leadership role if he hasn’t already.

Conference meets this season will be one-on-one between two schools. Yelm held its first one against Capital on Wednesday (results weren’t available by Tuesday morning press time, results will be posted online at yelmonline.com).

McIntire also feels confident about the season. If you take Cerkowniak away from the pack, McIntire said, you still have something undeniably special.

“That group of Kelan, Ethan and Ryan (Lange) — they’re all right together… Anyone of those three is going to have the chance to beat the other team’s No. 1,” he said, noting that the team’s tenacity and dedication reflect that cross country can be a team sport.

Cerkowniak also plans on focusing on winning, in whatever capacity that looks like, McIntire said. If the state 3A championship was held this year, Cerkowniak would be favored to win.

“He is the top 3A athlete in the state, and it’s really hard to express that,” he said. “I think his legacy is pretty well set and I think that’s something he’s working to. To not be able to prove you are the top athlete in the 3A state of Washington is a challenging thing to work through.”

Senior Kya Ramirez, sophomore Gabriella Willadsen and junior Clare Lawlor will return to the course this winter on a nine-girl Lady Tornados team. The girls last season placed seventh as a team at the SSC meet, with Willadsen, Ramirez and then-sophomore Kaylee Faber going on to run at the Westside Classic District meet.

Ramirez, who will run next year at Saint Martin’s, is looking to have a strong final season this year, said head girls coach Dan Baker.

“The kids have been doing a great job. They’re coming out, they’re training hard, they're making improvements and really figuring out what they can do,” Baker said. “I think (Kya’s) got it all together, and I think Gabbie’s on her way.”

The wild card this season for the girls could be freshman Sophia Laughlin, who trained with Ramirez most of this winter. She was a runner from Ridgeline, Baker said, and her mile is only about 20 seconds behind her senior counterpart’s.

Baker said they’re going to race well, no matter the weather or season, and make the most of every opportunity they can get their hands on.

“We’ll make the best of it. These boys and girls have the best attitudes. As coaches, we’re just so ecstatic to have a season … It’s exciting,” he said.

Yelm Runners to Watch Out For

Per SSC regulations, no attendees will be admitted onto competition facilities.