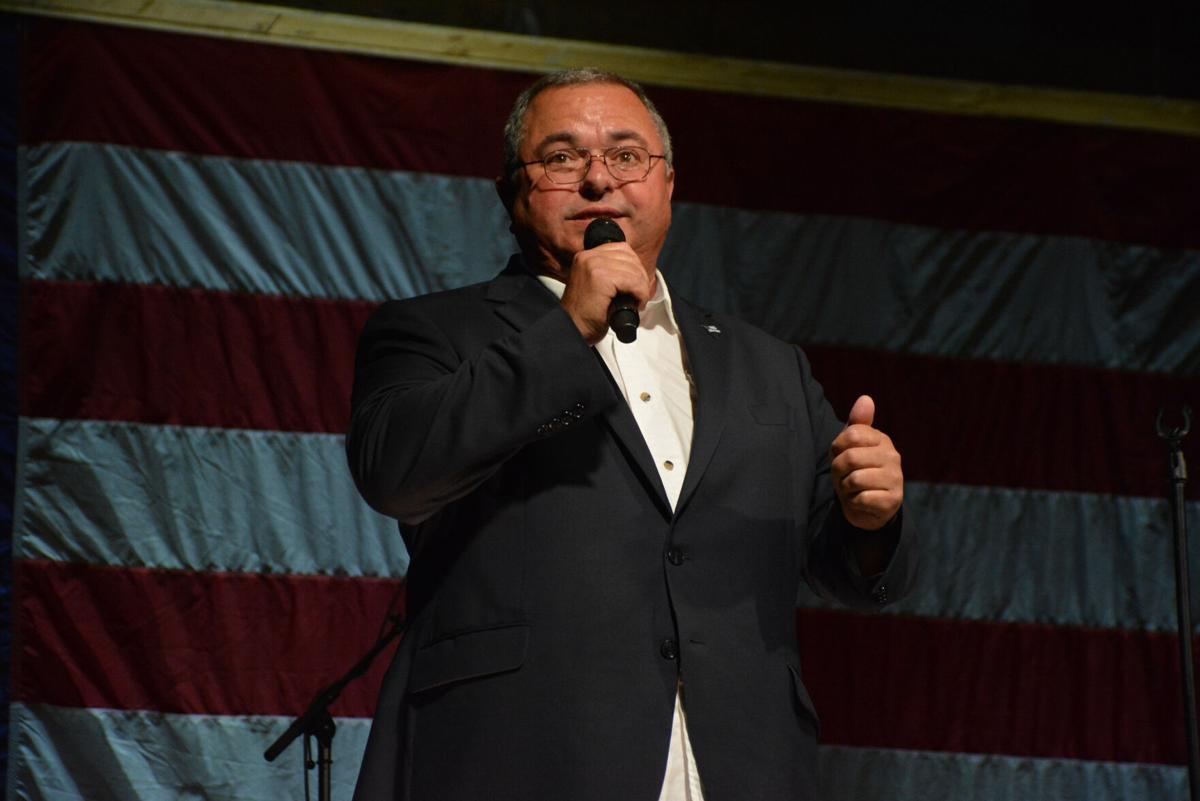 Loren Culp gives a thumbs up at a Toledo rally, which many have called a “protest” against Gov. Jay Inslee’s COVID-19 restrictions. 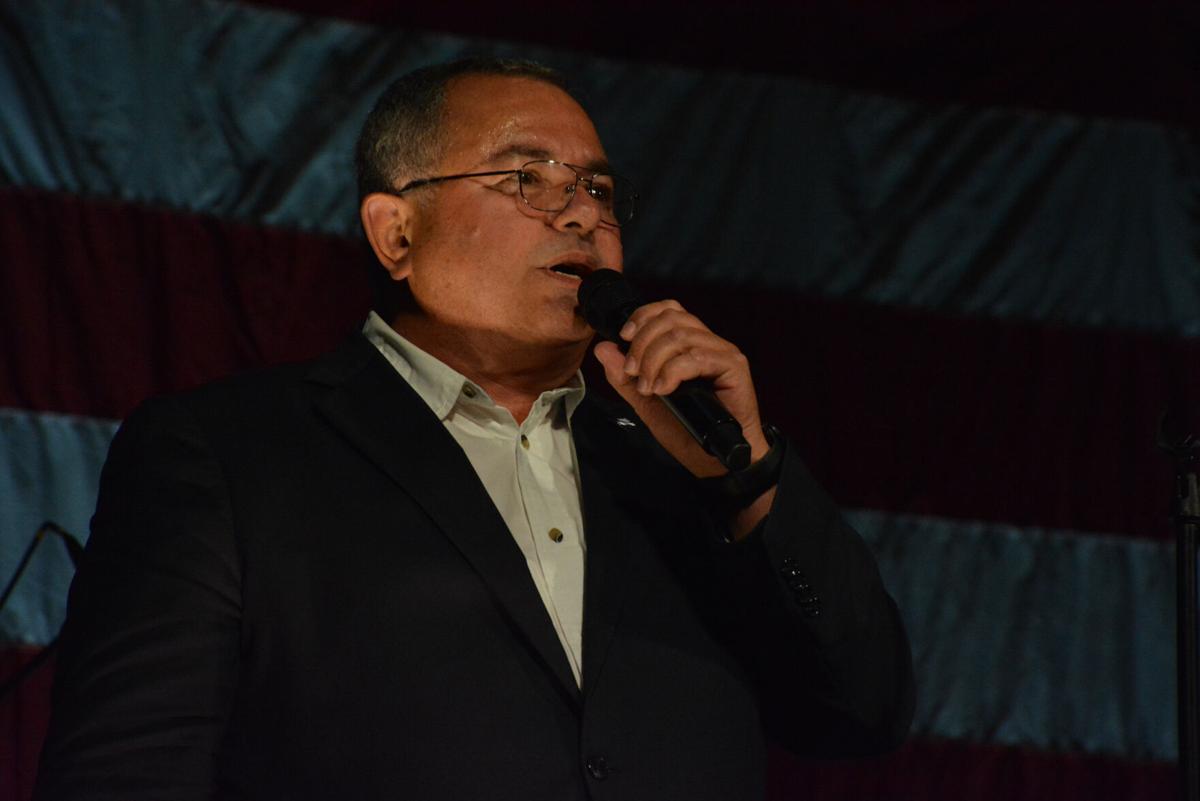 Loren Culp speaks to an unmasked crowd of a few thousand at an Oct. 13 Toledo rally. 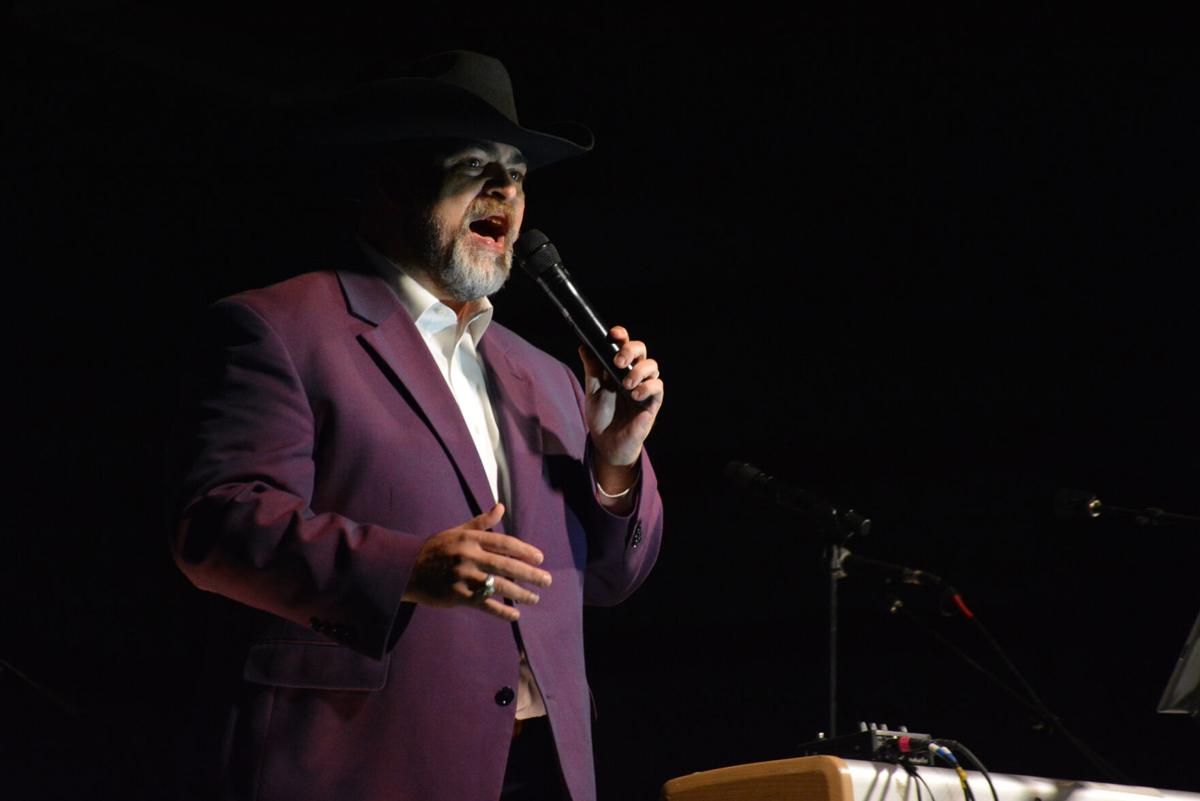 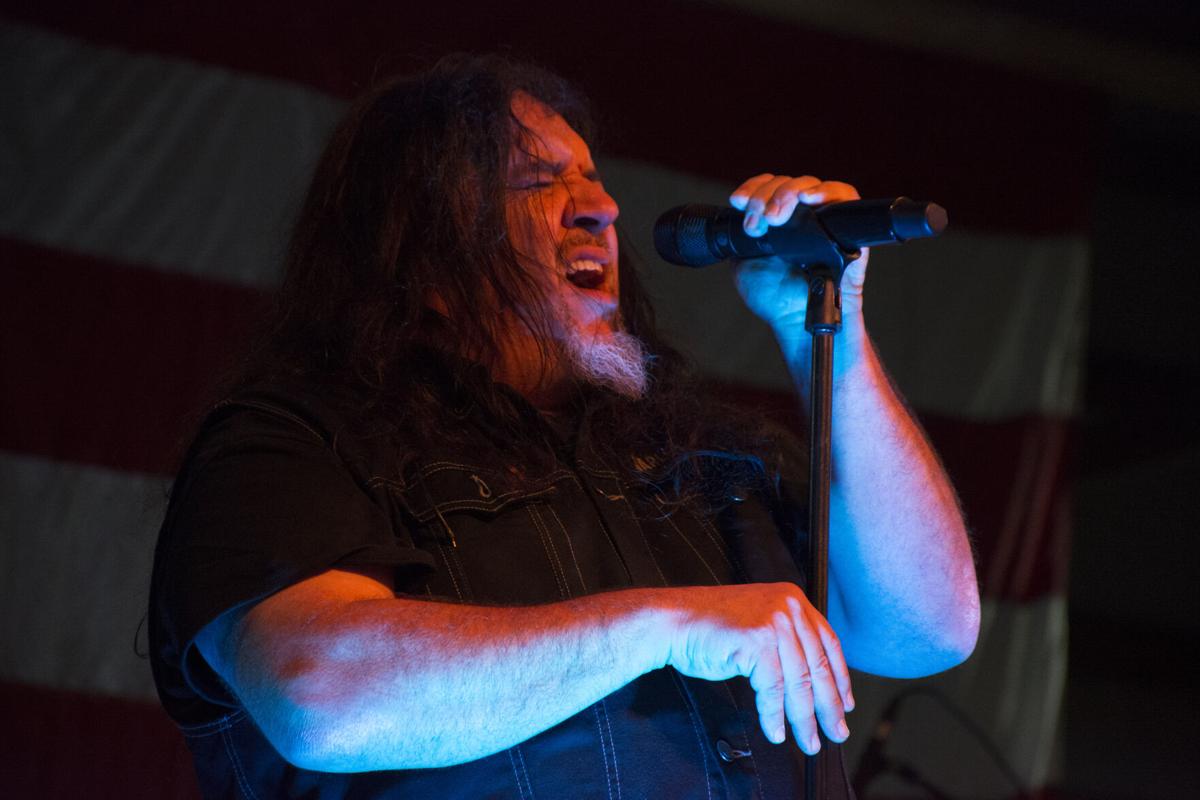 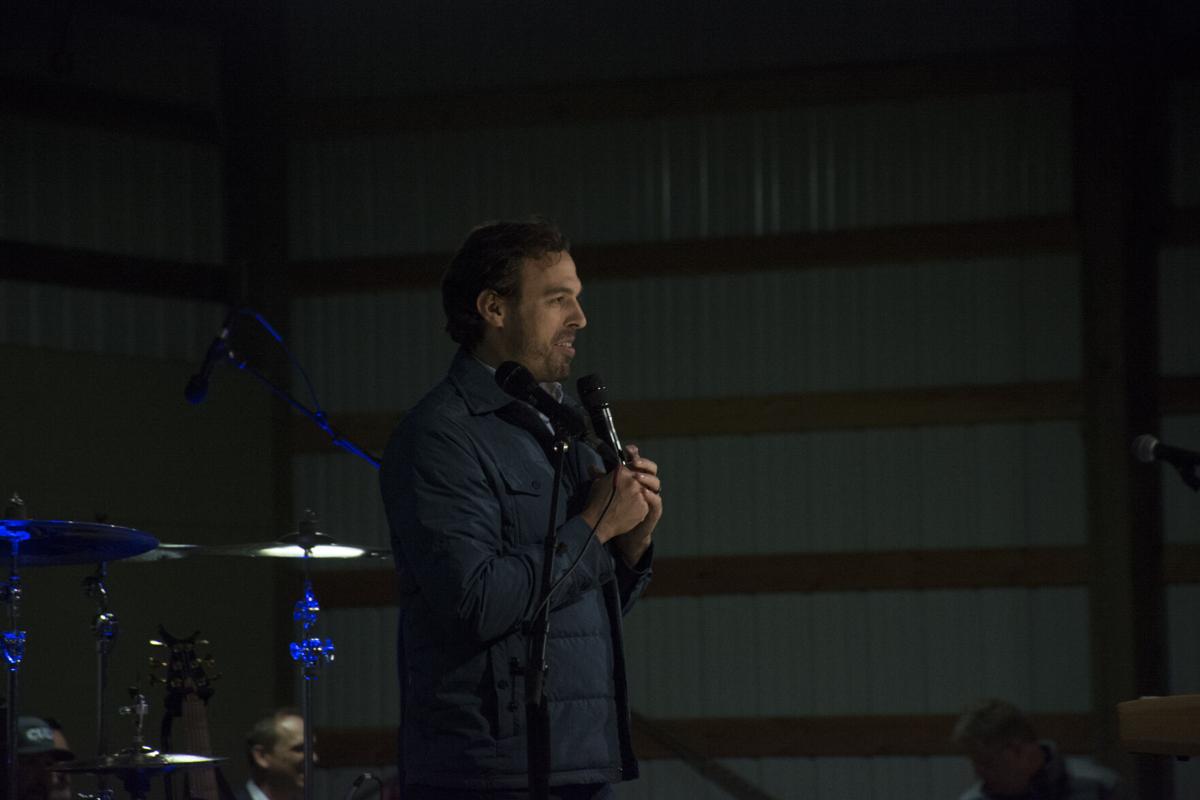 Caleb Heimlich, chairman of the Washington State Republican Party, tells the crowd that it takes courage to be republican in Washington. 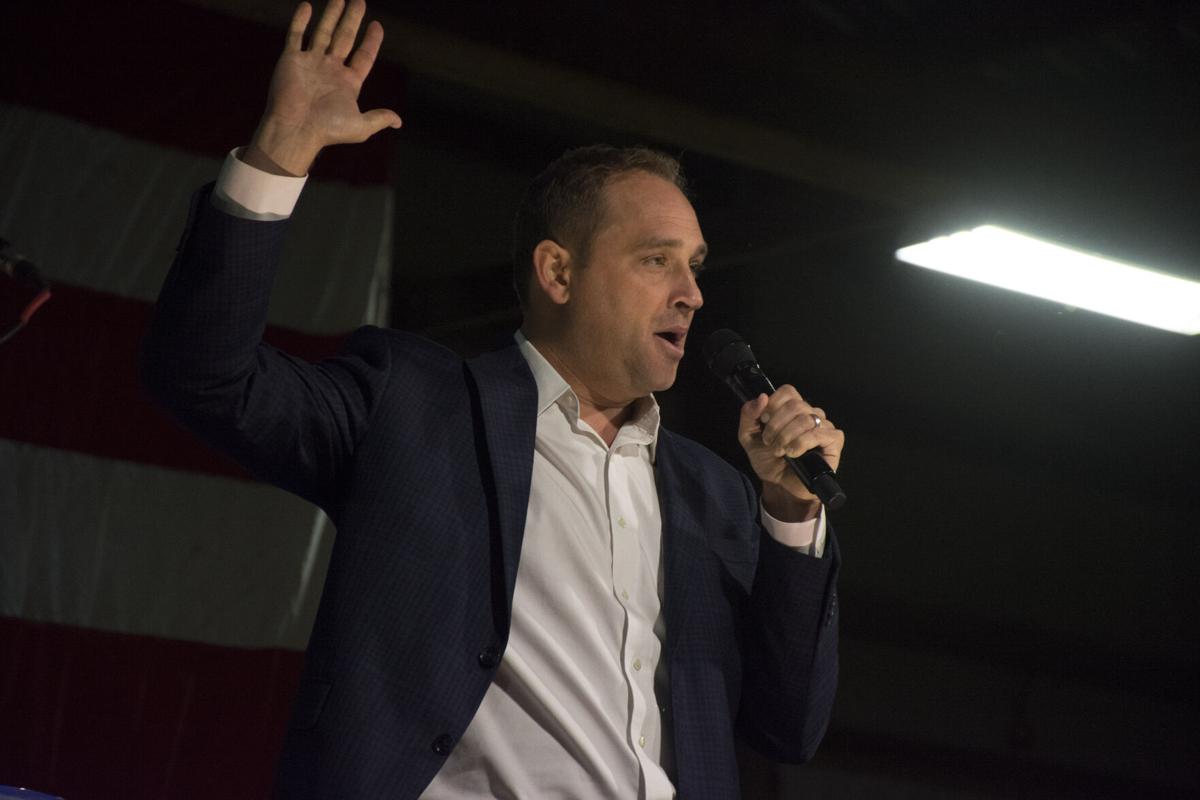 Matt Larkin, running for attorney general, speaks at an Oct. 13 rally in Toledo.

Loren Culp gives a thumbs up at a Toledo rally, which many have called a “protest” against Gov. Jay Inslee’s COVID-19 restrictions.

Matt Larkin, running for attorney general, speaks at an Oct. 13 rally in Toledo.

Gubernatorial candidate Loren Culp’s rally in Toledo Tuesday night felt more like a party than a “protest” — a word critics and supporters alike have used to describe the police chief of Republic’s events held across the state. The events have flouted state guidelines issued by his opponent, Gov. Jay Inslee, to curb the spread of a virus that has taken more than 2,000 lives in Washington.

“That led me to be invited around the state to Republican party dinners as a speaker, and to gun shows and sportsman shows,” he said. “People started asking me to run for governor. At first I didn’t take it seriously, you know I was living my childhood dream.”

The small-town police chief also trumpeted his performance in last week’s debate, telling the crowd “that’s how you fillet a career politician with truth, logic, common sense and the golden rule,” and arguing that current economic hardship isn’t because of the virus, but because of Inslee’s handling of the virus.

“When I’m governor and we have another virus, I will have press conferences with medical professionals to explain to everyone what’s going on,” he said. “And then let free individual citizens decide what’s best for themselves, their families, and their businesses. That’s how you should be governor for a free state full of free people.”

Culp then moved to a personal story from when he was deployed to South Korea for a year without his family. He described a moment that “touched my heart,” during a joint exercise with American and South Korean forces.

“As our convoy would get close to one of those villages, all the people that lived there would come running up and line the edge of the road — little kids, older people — and they would have big smiles on their faces and they’d be waving with one hand, and with their other hand they would have little American flags,” Culp said. “The left wants to divide us all the time … they want to divide us by the color of our skin. Those people didn’t care what the color of our skin was … the only thing they cared about was that there were Americans in those trucks.”

On the docket to speak were Republican candidates all the way down the ballot — State Rep. Jim Walsh, R-Aberdeen, Joel McEntire running to represent District 19 alongside Walsh, Sue Kuehl Pederson running for commissioner of public lands, Matt Larkin running for attorney general, and write-in candidate for Lt. Governor Joshua Freed.

In support of Culp, notoriously loud-spoken Walsh urged the crowd to “push like you’ve never pushed before.” He also endorsed Initiative 1114, which would restrict the governor’s ability to declare a state of emergency. Under the initiative, the declaration would expire after two weeks.

“Fourteen days, that’s all he gets,” Walsh said. “Not six months.”

Speakers bashed Gov. Jay Inslee, many criticizing him for “sending your tax dollars to Nigeria,” a reference to the recent case of unemployment fraud that cost the state over $500 million.

McEntire called Culp’s bid for governor “a once-in-a-lifetime opportunity to make a real difference,” denouncing Inslee as overstepping his bounds as Governor.

“I wasn't born with this degenerative gene that makes me want to have a ruler or a king tell me how to run my life,” McEntire said. “I don’t know what it is with people that makes them think ‘I wish I had someone tell me what to do.’”

Larkin focused his criticism on his opponent, Attorney General Bob Ferguson, highlighting the many lawsuits Ferguson has lodged at President Donald Trump.

He also argued that Ferguson would target lawsuits at Culp, making for an inefficient government.

The topic of forest fires was brought up by Pederson, echoing some of the ideas Culp expressed in his debate against Inslee. Namely, that poor forest management is to blame for devastating fires on the West Coast. Pederson also partially blamed raging forest fires on the federal protection of land for the northern spotted owl, a threatened species.

“My very simple idea that I'm pushing, is we need to go back to the pioneer days and start pulling plows around towns and homes … it's not rocket science, but it's so quick and easy,” she said. “Our forests have no more roads in them, they've taken out all the roads, they don't have any more clear cuts because they don't log anymore … we also need to do something about these blankets of forests that go on and on and on, and there's no break.”

Anti-tax activist Tim Eyman was also given a chance to speak, handing out stickers for his $30 car tab initiative and asking the crowd to contribute to his legal defense fund. The failed gubernatorial candidate is entangled in a lawsuit alleging campaign-disclosure violations, and has had to pay up for court contempt fines.

Local politicians and candidates were in attendance Tuesday night, including County Commissioner Edna Fund and her challenger Sean Swope, Winlock Mayor Brandon Svenson, commissioner candidate Lindsey Pollock, and Morton Police Chief Roger Morningstar, all of whom got a shoutout from host Glen Morgan.