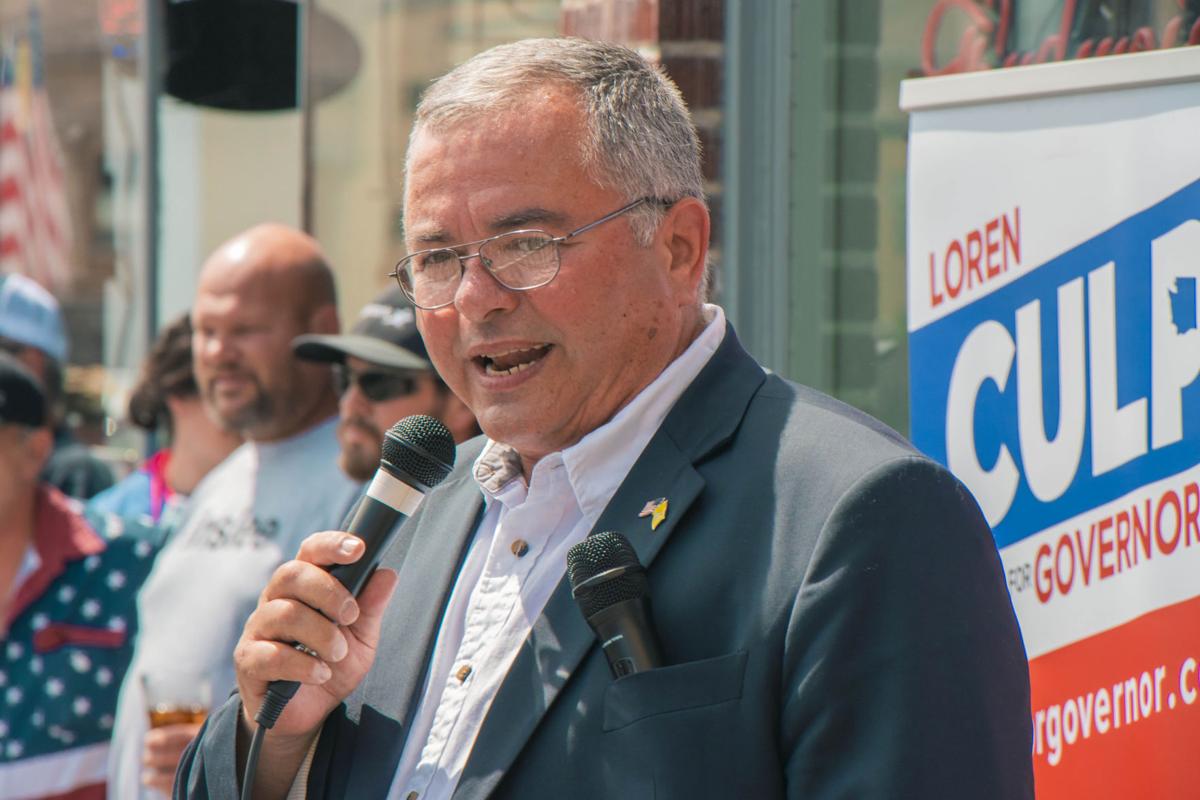 Loren Cukp speaks through microphones in front of Sidelines Sports Bar and Grill as he addresses crowds during a campaign rally Thursday afternoon in Chehalis. 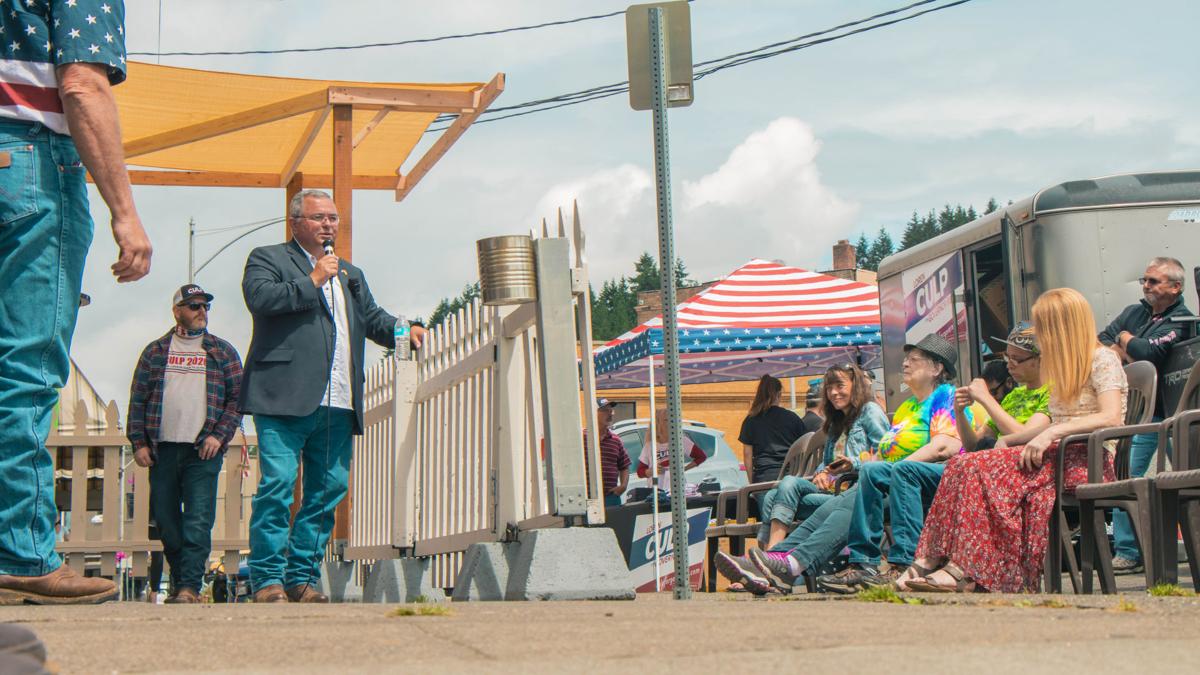 Loren Culp stands behind a fence as he addresses crowds in front of Sidelines Sports Bar and Grill during a campaign rally Thursday afternoon in Chehalis. 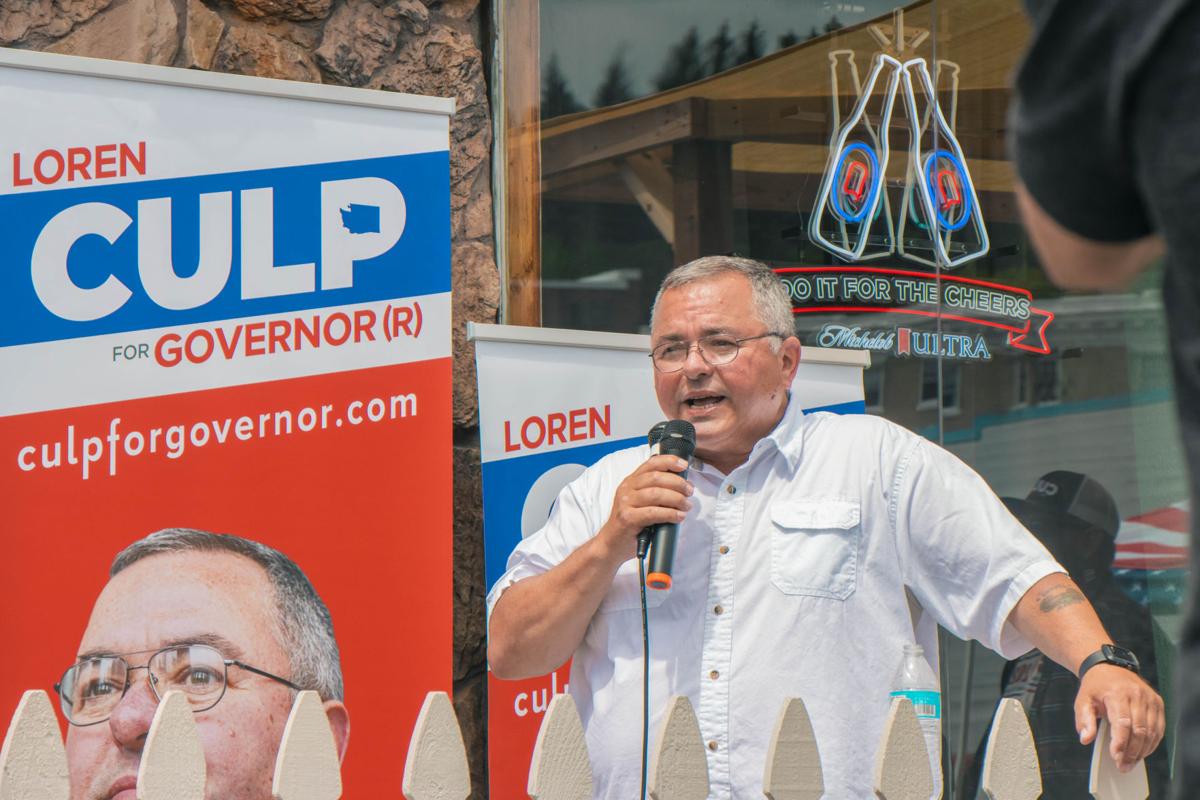 Loren Culp addresses crowds in front of Sidelines Sports Bar and Grill during a campaign rally in Chehalis last month. 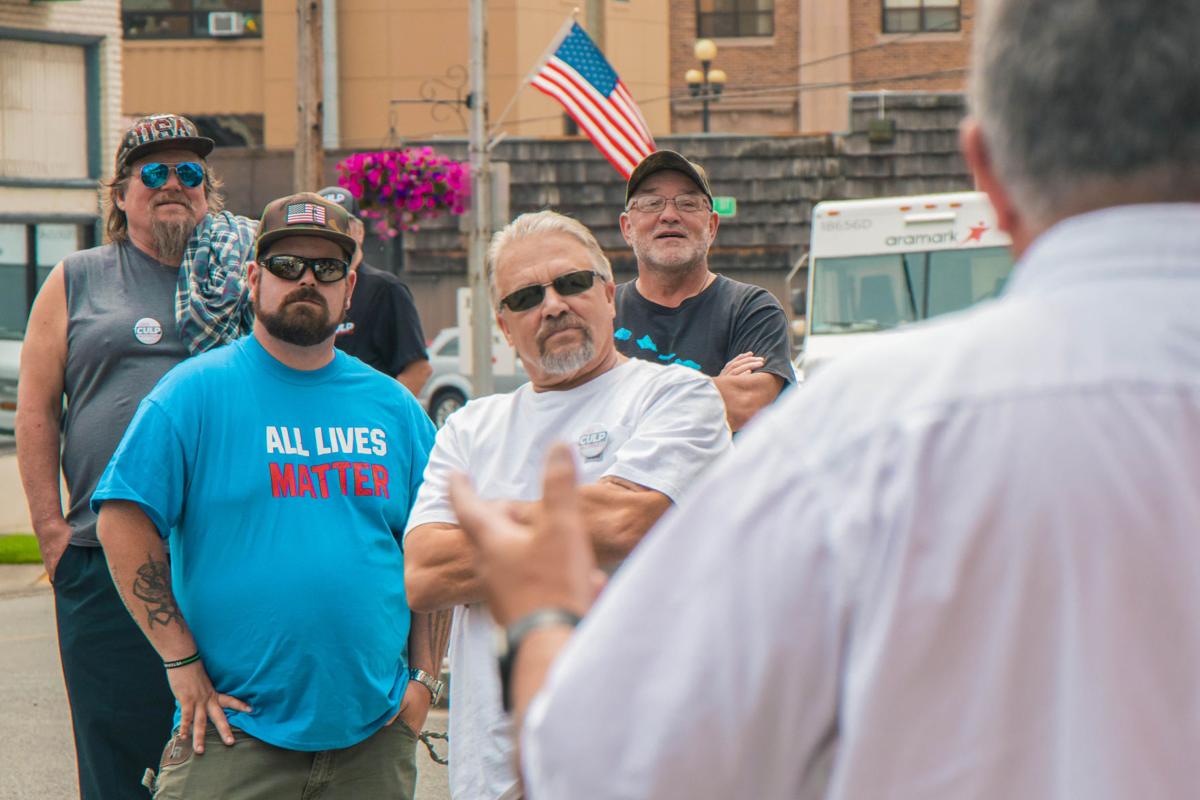 Loren Culp addresses crowds in front of Sidelines Sports Bar and Grill during a campaign rally Thursday afternoon in Chehalis. 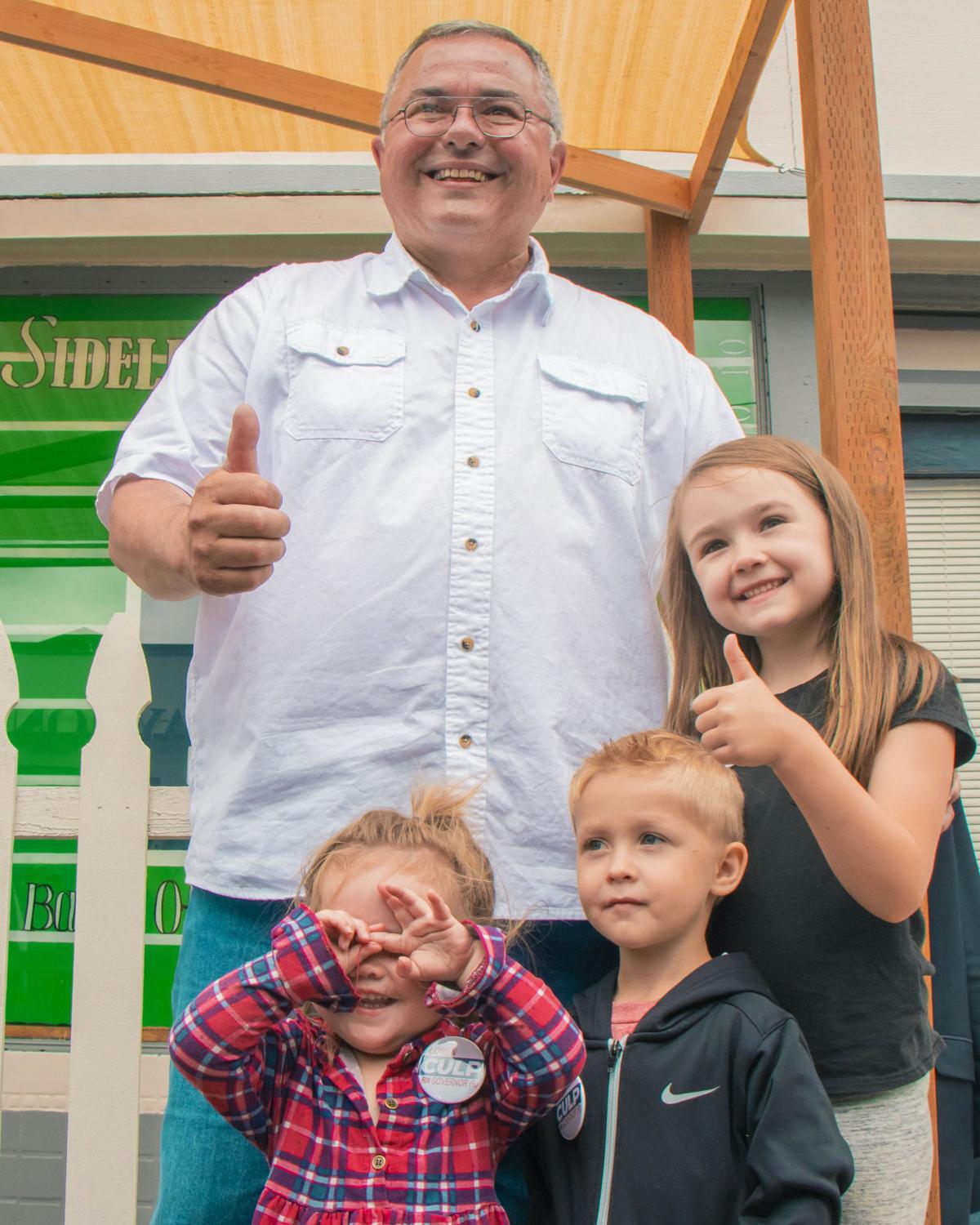 Kids pose for a photo with Loren Culp during a campaign rally in front of Sidelines Sports Bar and Grill Thursday afternoon in Chehalis. 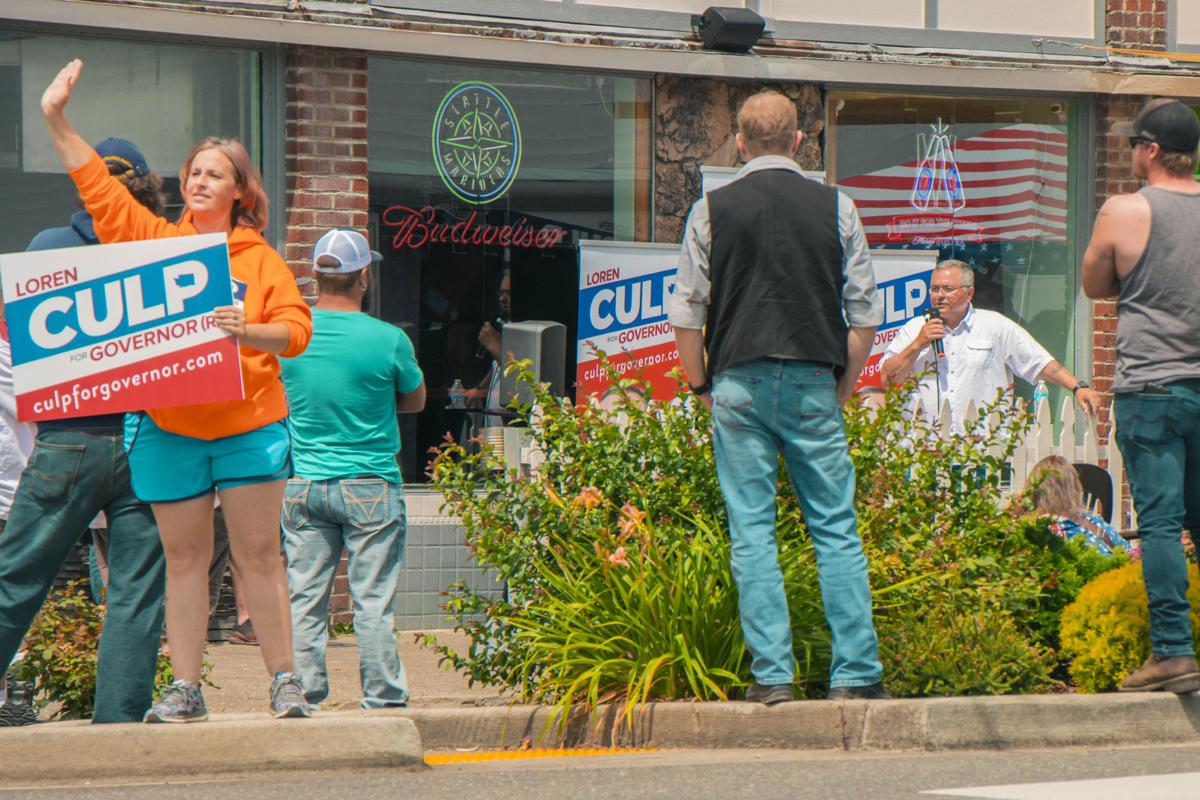 A member of Loren Culp’s team stands on a corner waving to passing vehichles as he addresses crowds in front of Sidelines Sports Bar and Grill during a campaign rally Thursday afternoon in Chehalis.

Washington governor candidate Loren Culp was in Chehalis Thursday afternoon outside of Sidelines Sports Bar & Grill doing a meet and greet with about 40 people.

Standing behind a white picket fence and in front of several people sitting in lawn chairs and others standing around the side, Culp spoke for about 45 minutes discussing a wide range of topics but noted his disdain for Gov. Jay Inslee early and often, referencing the governor more than 15 times during his speech and calling him a “clown.”

Other subjects that Culp touched on were his own rise to notoriety in 2018 when he refused to enforce I-1639, a gun regulation that moved the legal age to purchase a semi automatic rifle from 18 to 21 among other changes, his book “American Cop” that was released in 2019, issues in the state surrounding homelessness, hunting and fishing, public education and the protests over racial inequality in Seattle.

However, about seven hours after the Facebook post was released saying the event was canceled, another one came from the bar’s page saying it was back on.

With no protest in sight, the reception for Culp from the 40 people in attendance was warm and some who came with specific questions for the candidate got what they were looking for in his speech.

Ron “Wagon” Bena intended to ask Culp about what he would have done about the Capitol Hill Organized Protest in Seattle, better known as the CHOP, if he were governor.

About 25 minutes into his speech, Culp laid out what he would have done, while faulting Inslee for sending in the national guard too late and unarmed. He said under his watch, the national guard would have been called in within minutes when things got out of hand and with “the means to protect themselves and other people.”

“They would have helped local law enforcement to shut down the violence and shut down the riot, arrest those criminals who were acting out criminally and tell the others to disperse and if they didn’t they would be arrested too for rioting, that’s how you handle a violent situation,”  Culp said.

Matt Buchanan, who is an avid fisherman and hunter, said he was curious to know how Culp would benefit fishing and hunting in the state.

After Culp took a jab at Inslee saying he probably doesn’t know which end of the fishing pole to hold onto, he offered three solutions he thinks will bolster the declining salmon runs:  building more hatcheries, managing the “overpopulated predators” and taking better care of spawning habitats.

“We will have so much salmon that people will get sick and tired of eating salmon,” Culp said.

He added: “Is that even possible? I don’t think so.”

After Culp’s speech had concluded, he told The Chronicle he was pleased with the turnout and how the afternoon went, adding that his campaign is seeing support from all over the state.

“Democrats are coming up to me saying they are voting for a Republican for the first time in their life, because they like the rule of law and what I speak about,” Culp said.