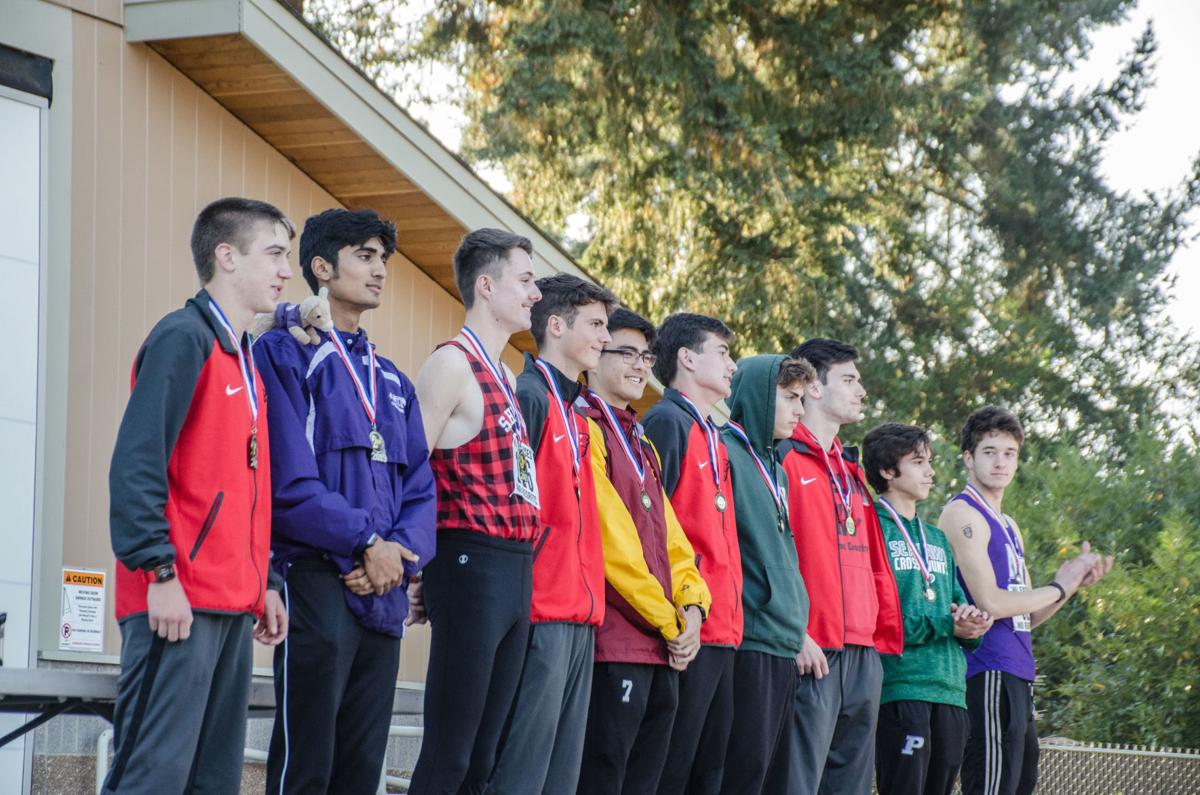 The top-10 finishers in the boys 3A SSC pose for a photo. Impressively, four of those 10 top spots belonged to Yelm atheletes. They include junior Bryce Cerkowniak, junior Kelan Herness, sophomore Ryan Lange and senior Jacob Barnert. 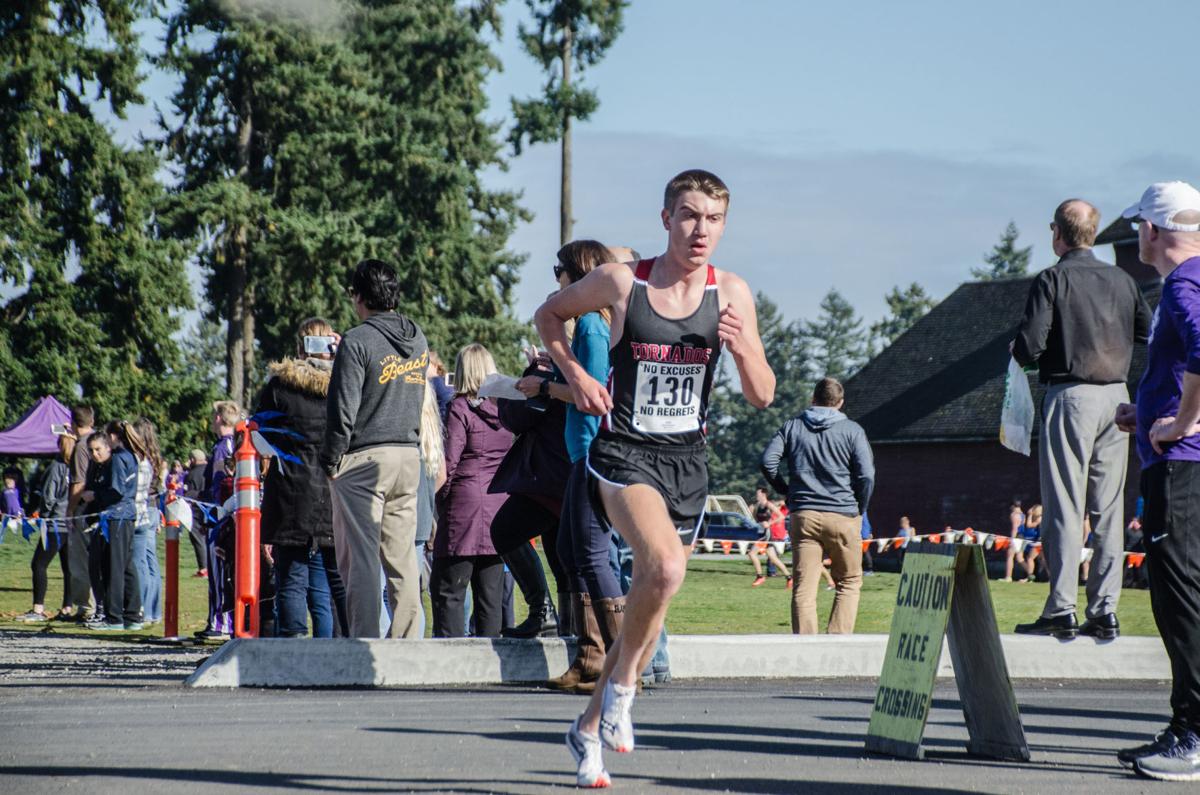 FILE PHOTO — Yelm junior Bryce Cerkowniak leads the pack by a lengthy margin in this photo taken during the league championships last month. 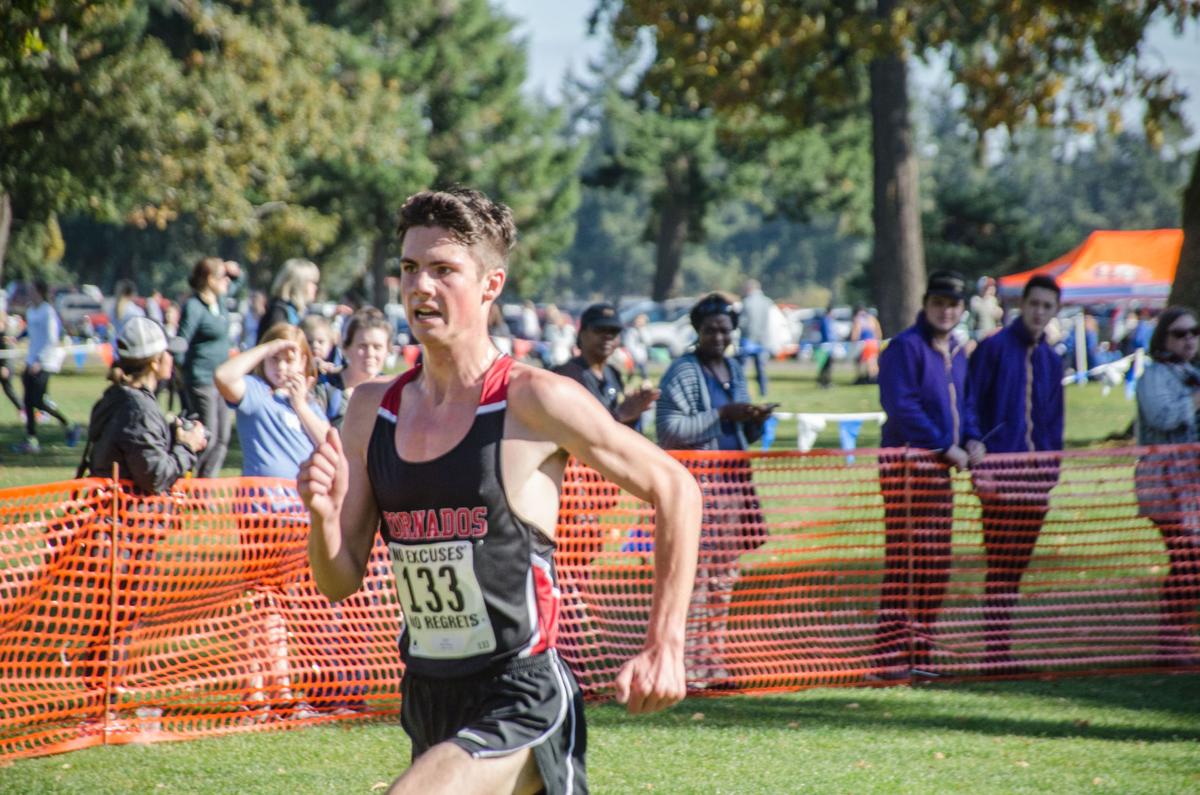 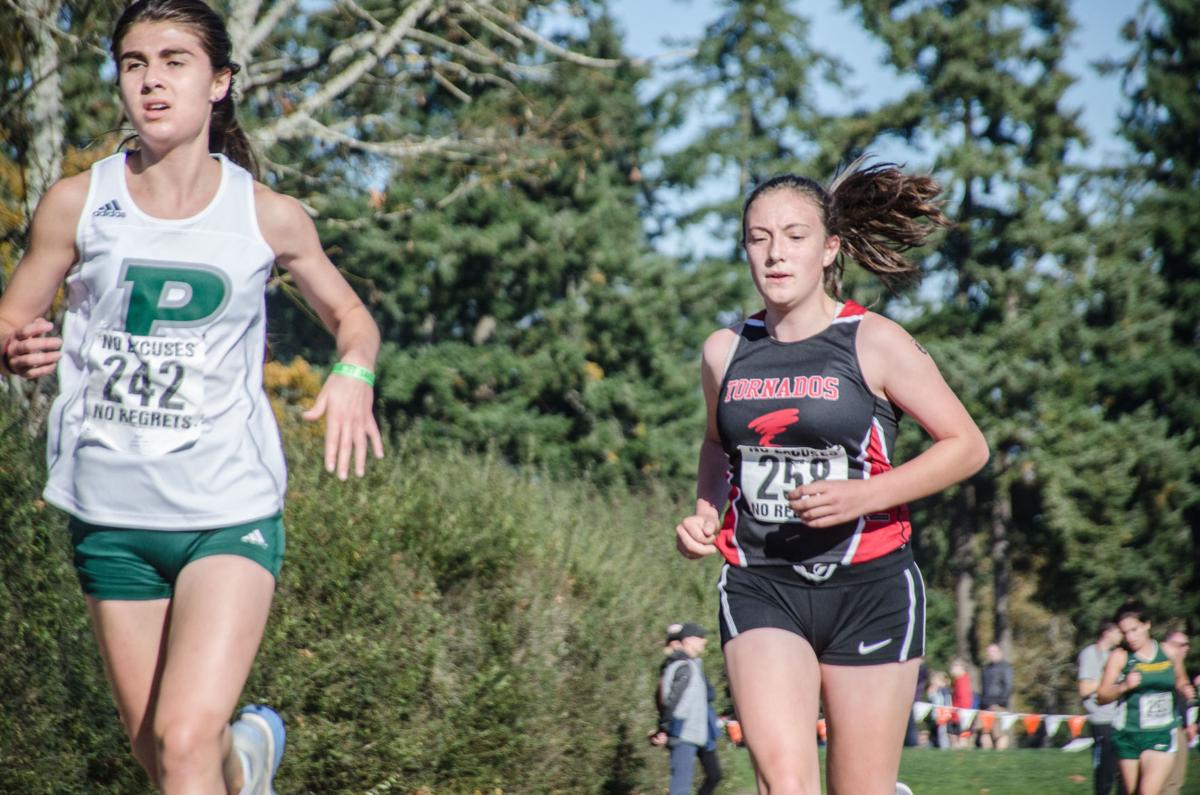 Yelm sophomore Kaylee Faber advances on other runners Thursday afternoon during the 3A South Sound Conference race. Faber made big moves against competing league teams, and will be one of three runners for the girls team at the Nov. 2 district meet. 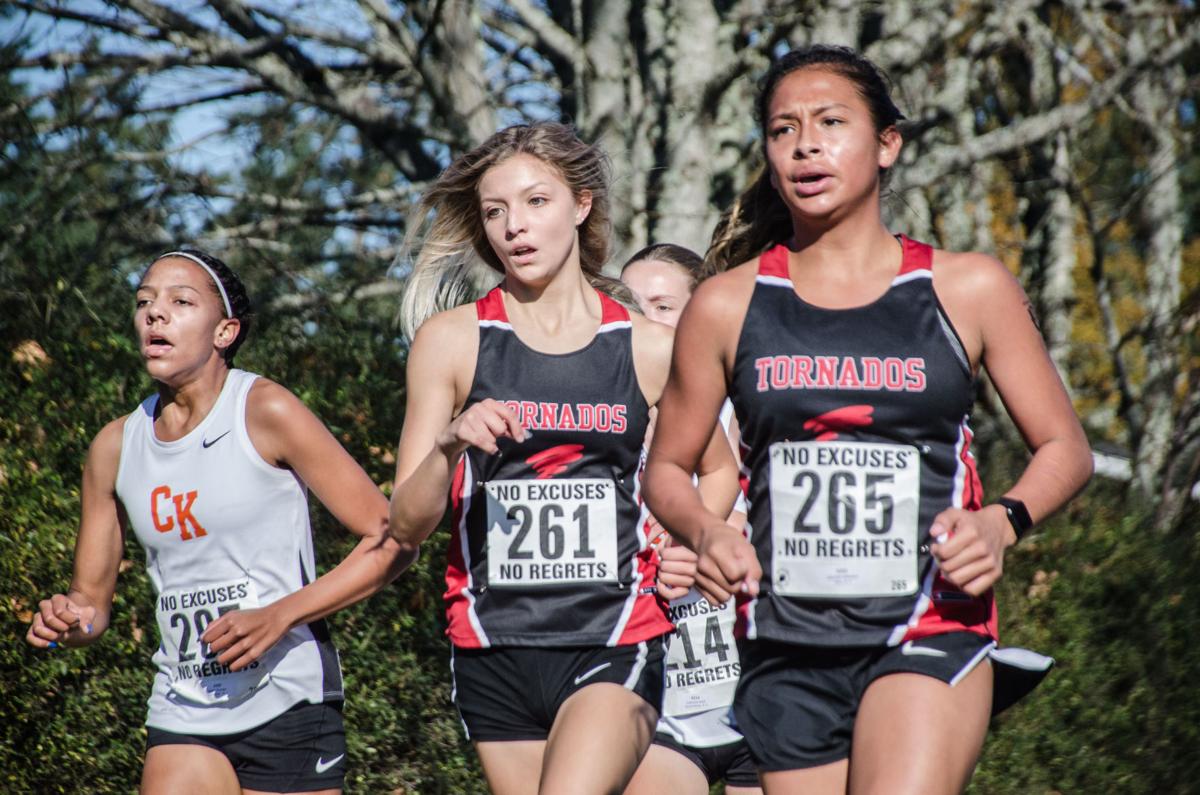 Yelm junior Kya Ramirez, left, and freshman Gabriella Willadsen, right, finished 25th and 26th, respectively, and will move on to the district race in November. The Yelm girls’ team will not advance to districts, as they fell 3 points short of a sixth place finish to qualify. 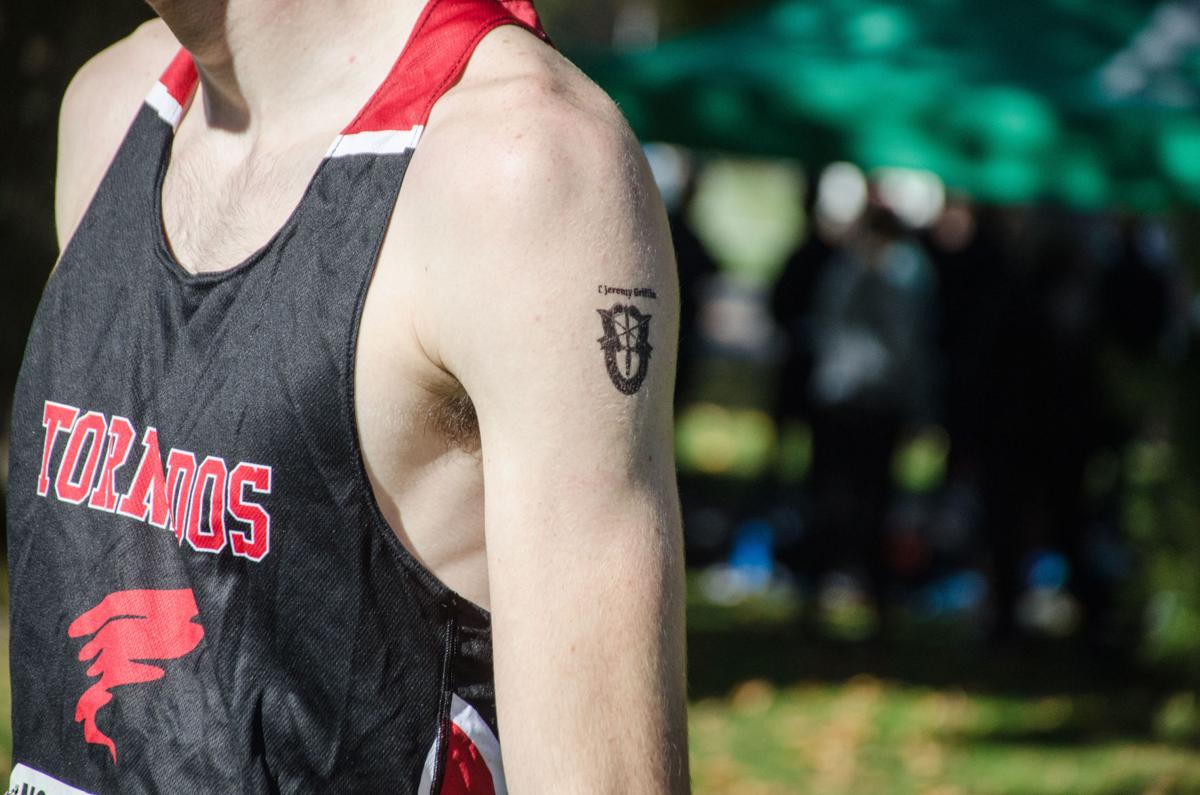 A temporary tattoo of the Army Special Forces insignia is displayed on a Yelm athlete. The Tornados sported the emblem in honor of SFC Jeremy Griffin, who was killed in Afghanistan. Griffin’s son, Charles, is a sophomore who runs on the Yelm team.

Yelm’s Bryce Cerkowniak, a talented runner who’s helped lead his team from a seventh-place finish last year to the first-place spot, bested 69 other league racers to finish first, which was of little surprise to his coaches who have helped the junior make considerable strides.

The team’s success was for more than glory though. Both the boys and girls teams wore temporary tattoos at the league event honoring Army Sgt. 1st Class Jeremy Griffin, who was recently killed while serving in Afghanistan. Griffin’s son, Charles, is a sophomore who runs for Yelm.

“Everybody stepped up today, which is good,” head boys coach Alex McIntire said following the race.

As a team, Yelm finished first with 33 points, North Thurston finished second with 73 points and Peninsula placed third with 88 points.

Yelm were the favorites going into Thursday’s league matchup to take the title, but nerves were high as the Tornados took to the start of the twisty 5-kilometer course at Fort Steilacoom.

“There’s a lot of opportunities to make moves. We make moves on the hill,” McIntire said of the course.

While the boys were confident going into their race, the girls were at somewhat of a disadvantage running for the day. Without their No. 4 runner, junior Lenna Miskimens, head girls coach Dan Baker knew it was going to be an uphill battle for his team to secure a spot at districts.

“If things get to the point where we can compete next week, great. If we fall short, we have a great base to work off of next year,” Baker said as his girls lined up for the race.

Ramirez and Willadsen, per usual, led the pack for Yelm and finished 25th and 26th, respectively.

Ramirez’s 21:40.40 finish was a personal record for the second-year Yelm junior.

At the mile mark, Faber trailed behind a group of North Thurston runners. Baker said he noticed a break in their pack and eyed at Faber to overtake the group of girls at the hill.

Baker said when Faber came out at the final stretch, he was beyond pleased to see her in front of North Thurston.

“The way they ran, it’s got me excited,” Baker said. “I couldn’t have scripted it any better.”

But despite the Yelm girls’ strong effort, North Thurston would best them as a team, taking the highly-sought sixth-place finish and yanking the lady Tornados’ chance at a district appearance.

“I knew by the way they were running that we were gonna be short. Unfortunately, I was right,” Baker said, recounting the finish.

Zach Walsh, a Yelm freshman who’s had a remarkable season with the boys’ varsity squad, suffered from a fall early in the race and was pulled. McIntire said Walsh, who was Yelm’s No. 6 runner going into the league race, is a hard worker and he looks forward to seeing him step up next season.

Hard Work and Dedication: The Road That Brought Yelm’s Bryce Cerkowniak to the Top