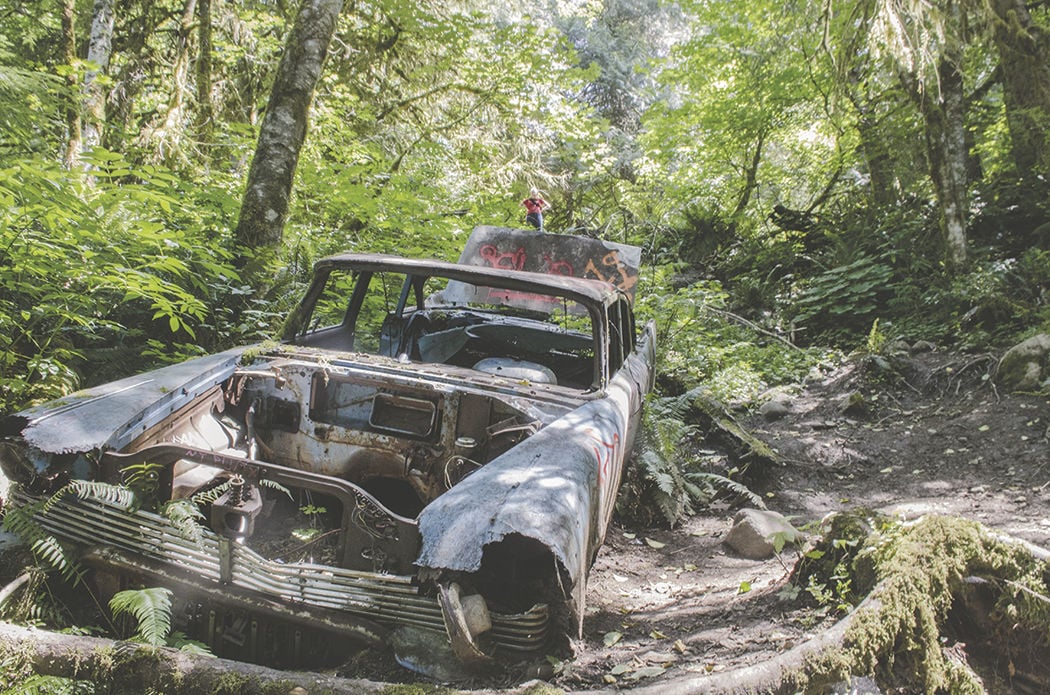 Rusted car scraps lay along the lower banks of the Carbon River during a Sunday afternoon hike. 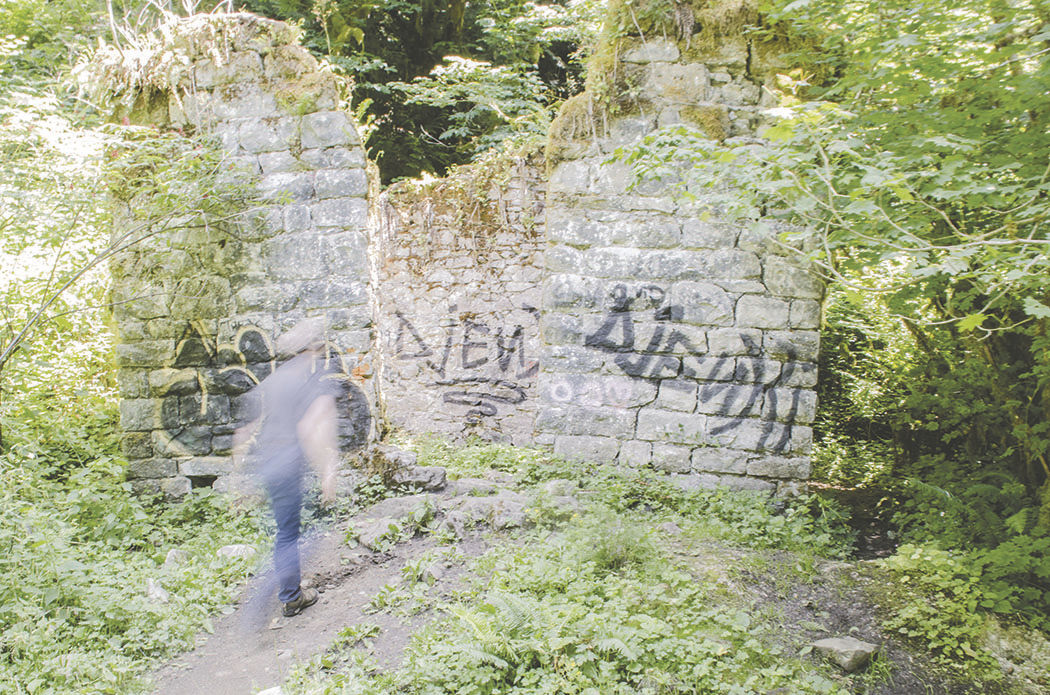 Ruins from Melmont, an old coal mining town, can be found at multiple spots along the trail from Fairfax Bridge. 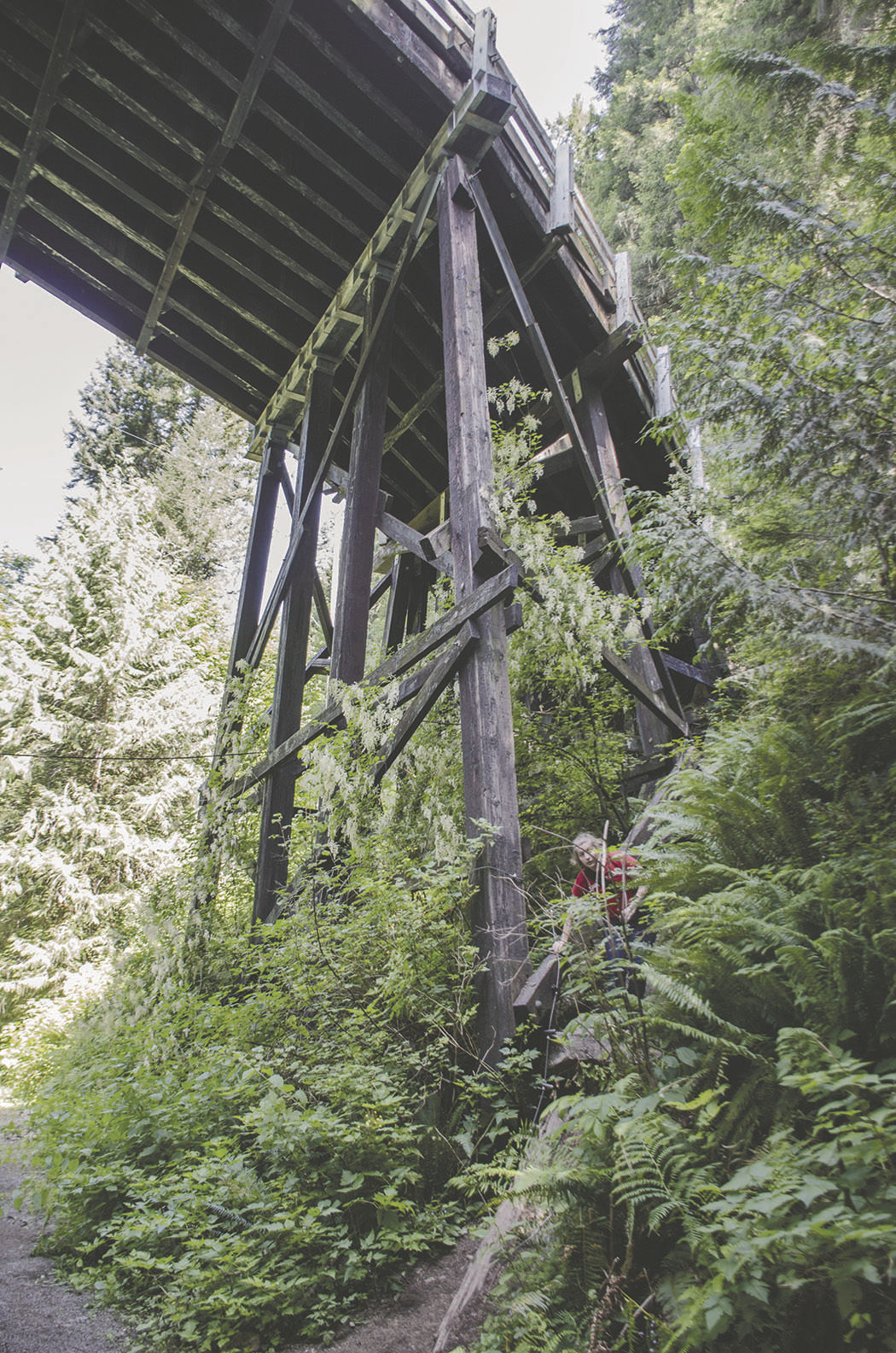 Watch your step! The northern route to Melmont Ghost Town begins along the Fairfax Bridge. Parking is limited and the trek down alongside the bridge can be steep and muddy at points. 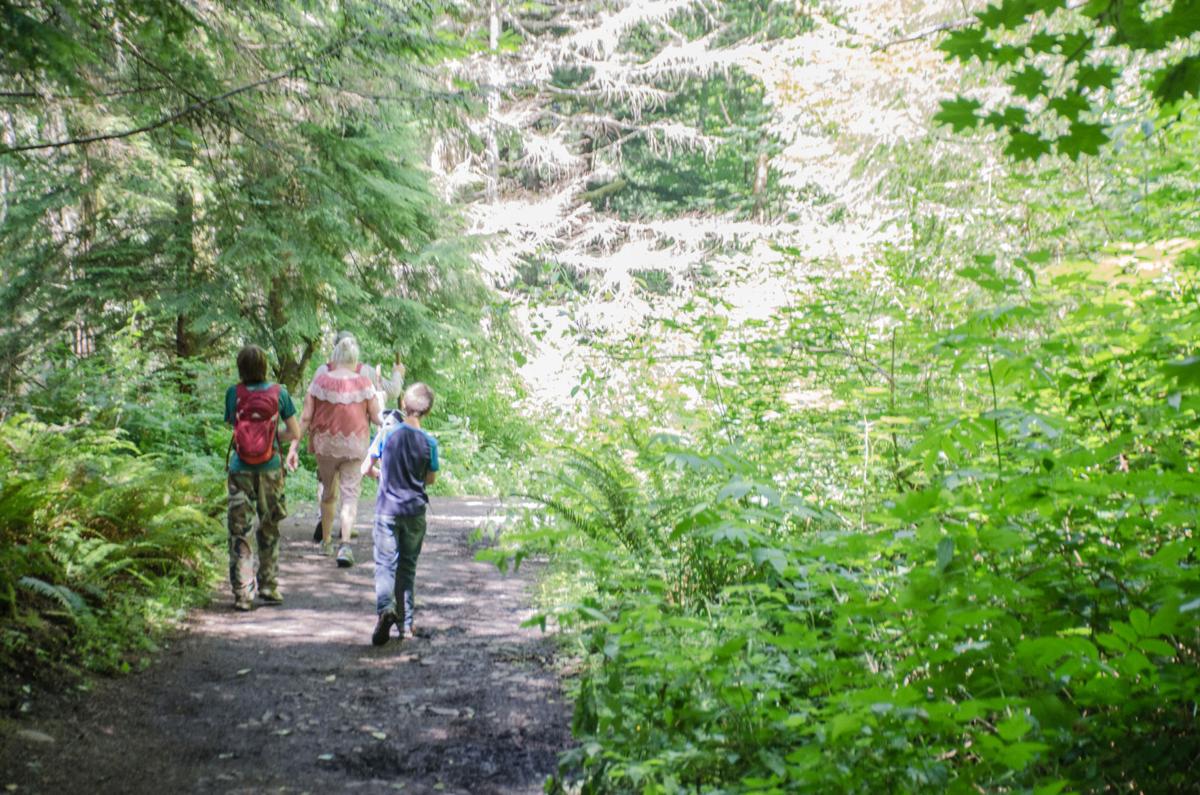 Shrubbery is in excess along the trail. Make sure to bring an extra pair of socks, as the trail can be quite muddy at points.

This week, let’s escape to a location where the wild daisies thrive and where scrap metal and mossy stone structures provide the perfect frame for a story about a state that once had an insatiable hunger for coal.

But I might be getting ahead of myself. Out in rural Pierce County, along the small, yet active waters of the Carbon River, is the Melmont Ghost Town trail — a 6-mile round trip hike that, since my transplantation to the South Sound, I’ve been itching to experience.

Location: Head south from Carbonado for roughly 3 miles. When you get to the Fairfax Bridge, a small, single-lane overpass, find parking and descend the narrow path on its eastern side.

Distance from Yelm: 1 hour and 5 minutes

What stands out from this hike isn’t its muddy, murky trails or the hum that you can hear as you hike along the eastern side of the river, but more the remnants of the abandoned coal town of Melmont and the historic structures, such as the half-wooden, single-lane Fairfax Bridge, that surround the area.

Heading south on State Route 165  toward Carbonado from Yelm, I noted that this was my first time out in this area. Passing through the small but patriotic communities of South Prairie, Wilkeson and Carbonado, I nearly came to the trailhead with as many questions about the communities that sprawl the narrow valleys of the northwest Mount Rainier wilderness as I did for my hike.

Coming up to Fairfax Bridge around noon on Sunday, it took us a few miles of driving and backtracking to find appropriate parking. We settled on a small divot along the eastern side of the Carbon River, about a half-mile from the trailhead.

According to the Washington Trail Association, there are three possible ways to get to Melmont Ghost Town. We took the first approach, which was the access point at Fairfax. The second point can be found a mile back toward Carbonado where hikers will find a series of pullouts next to the highway. For the third approach, hikers will need to drive down State Route 165, past Fairfax and onto Manley-Moore Road. After crossing a low, single-lane bridge over the Carbon River, there will be a divot for parking.

Make sure to check weather conditions and other traveling resources before departing.

After walking along the curvy and fairly dangerous State Route 165, we found our access point at Fairfax Bridge — a narrow and steep path with a metal lining for safety led down to the trail below. With the trail barely gaining 100 feet of elevation on this 1,320-foot elevation trail, your trip down from the bridge will likely be the most challenging elevation gain.

Note that the trail can be very muddy during all seasons. Sunday was a fairly dry day, but I practically needed a change of socks because of how much mud I was walking through. Thankfully, there were some small boulders lining the trail.

The Carbon River will follow you on your right as you make the excursion toward Melmont. While breathtaking views are slim throughout this hike, take note of the hum of the nearby river and the abundant wildlife and flowers growing all around. A healthy dose of moss also coats the stone ruins of the town and its abandoned vehicles.

According to a PBS report, Northwest Now Digital, this early-20th century town sprung out of the coal rush of the Northern Pacific Railroad. In its heyday, the town likely had all the amenities an ambitious miner and his family would need — a butcher shop, hotel, school house and housing aplenty.

The switch from coal-powered locomotives to diesel ultimately became its demise, PBS reports, and now the desolate town of Melmont continues its recession as the forests overtake the ruins. This town once was brimming with life and financial prosperity, and as you look at the ruins it’s hard not to think about those that walked the banks of the river before us.

Eric Rosane is a reporter with Nisqually Valley News and a local hiking enthusiast. For story ideas on hikes off the beaten path, contact him at erosane@yelmonline.com.

Heading Out: Hikes I’m Looking Forward To This Summer

Summer is in full swing and the trails have never been as busy as they are right now. With that being said, the roads and parking lots have al…