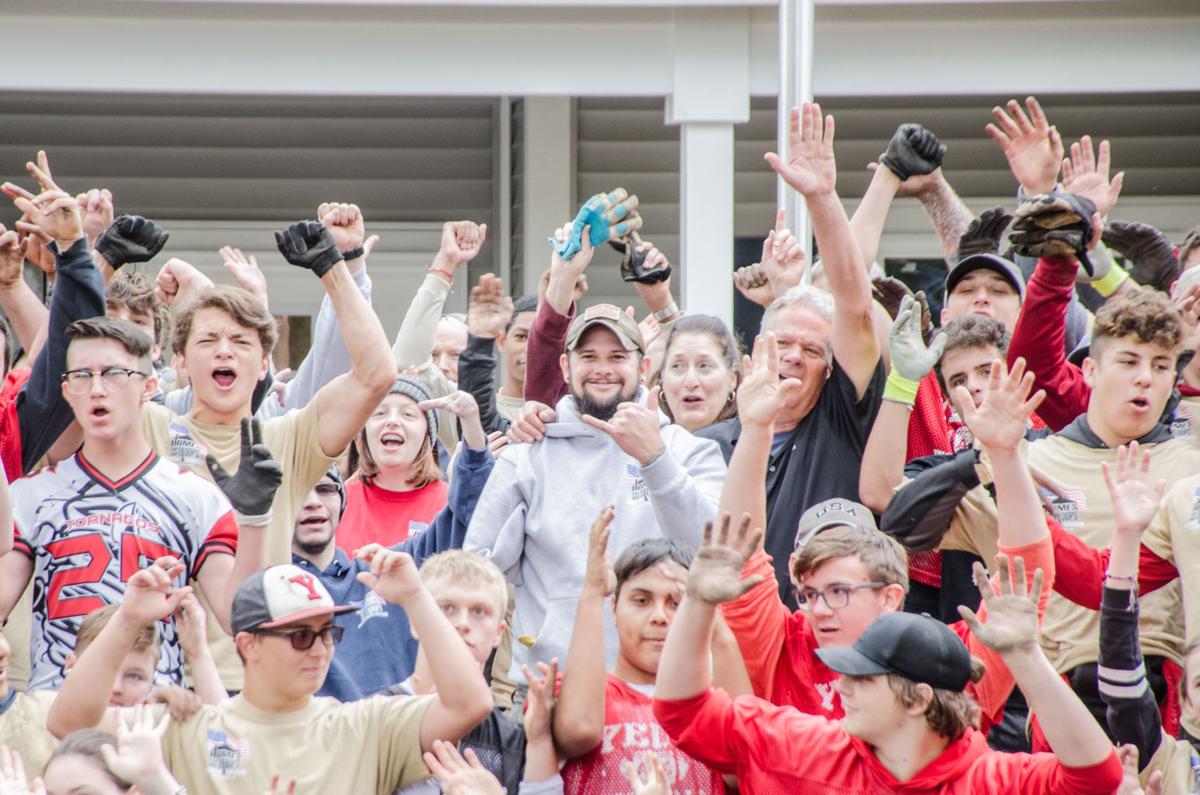 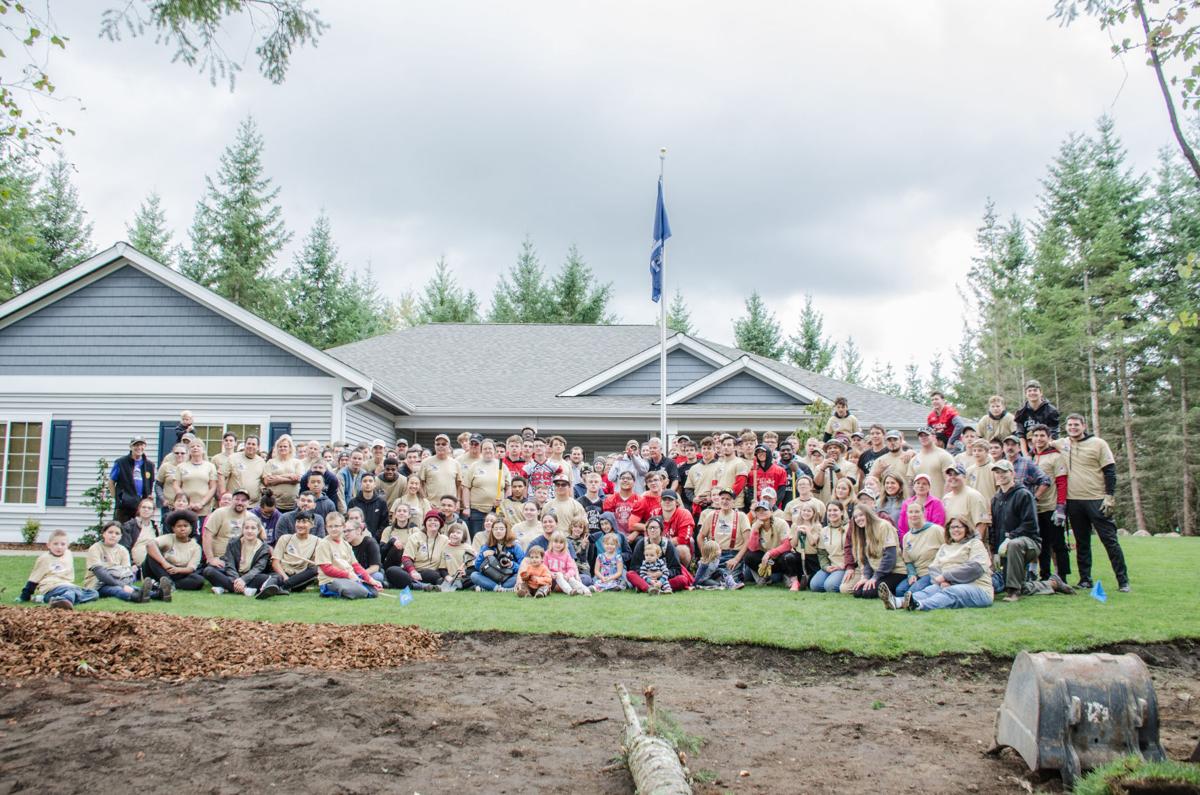 Volunteers come together to take a group photo earlier this month after finishing landscape work on Sgt. Aaron Boyle’s new house in Yelm. Boyle, who lost two limbs while serving in Afghanistan, will receive the retrofitted house from nonprofit Homes For Our Troops this December. 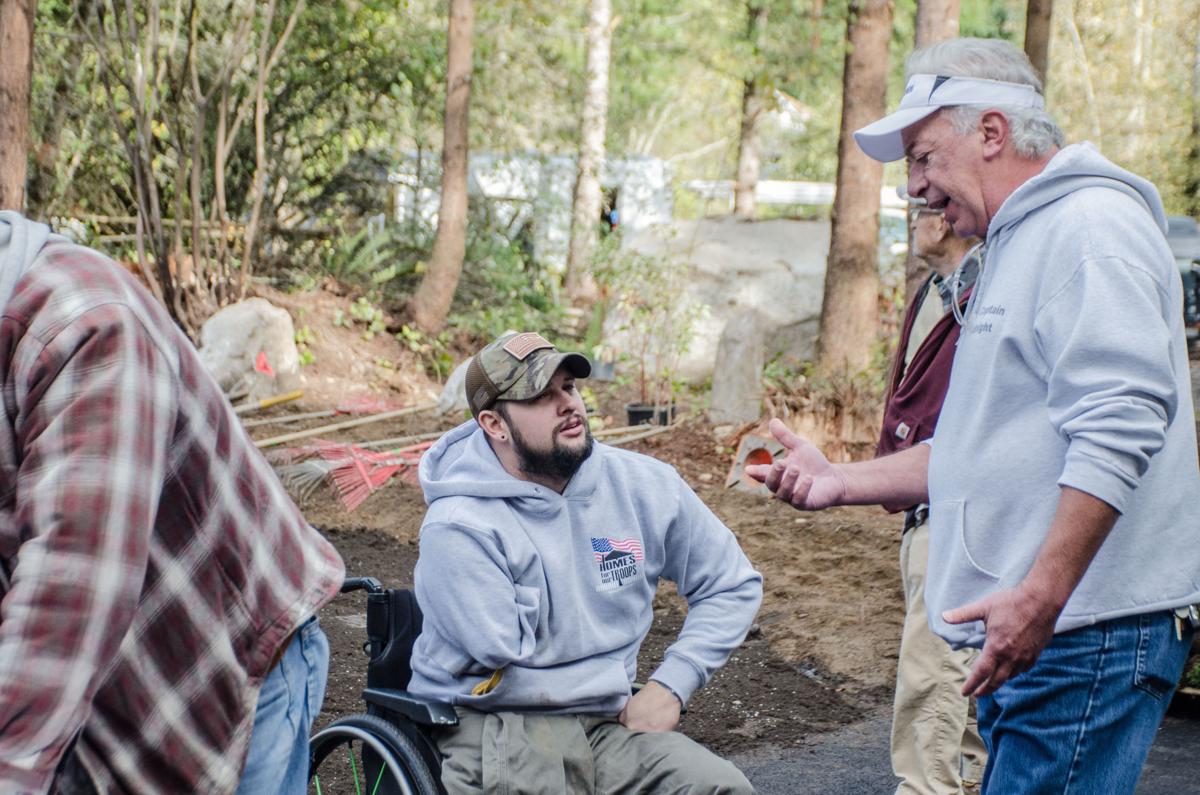 “You expect anywhere from 75 to 100 people, but (nearly) 300? That’s a lot… I wasn’t expecting it at all. It’s amazing to see the community and how much they care. You don’t see that often,” Sgt. Aaron Boyle said Saturday as hundreds of volunteers turned out to help Homes For Our Troops landscape his new house. 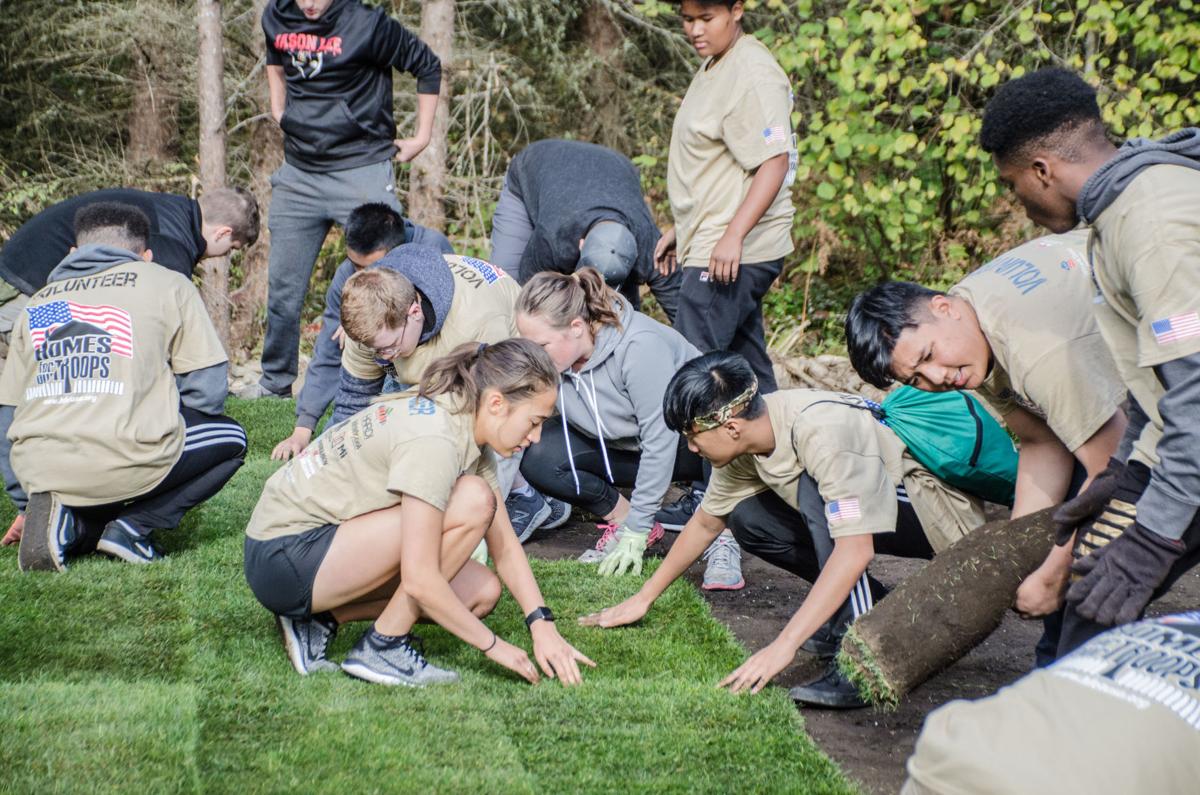 Volunteers help lay sod and sew it together Saturday morning. 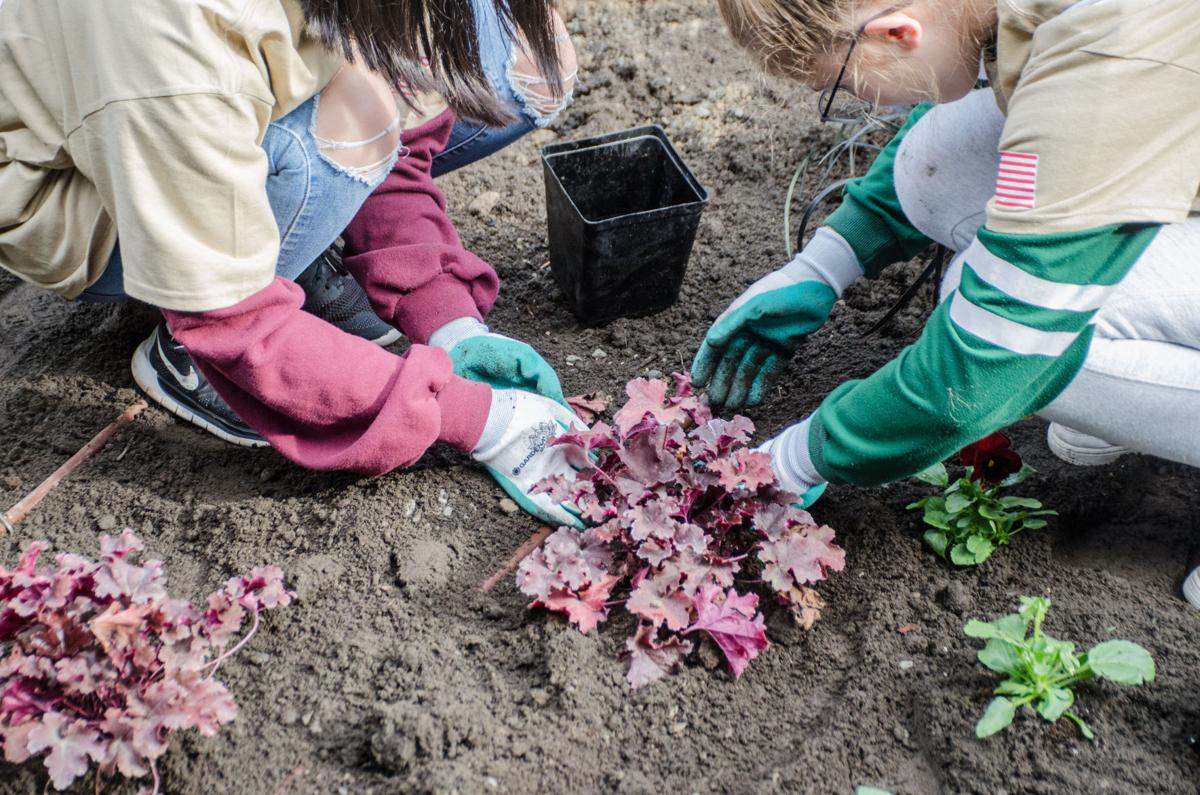 About 100 shrubs and trees were planted Saturday at Sgt. Aaron Boyle’s new house. Boyle will receive the keys to his new place in December. 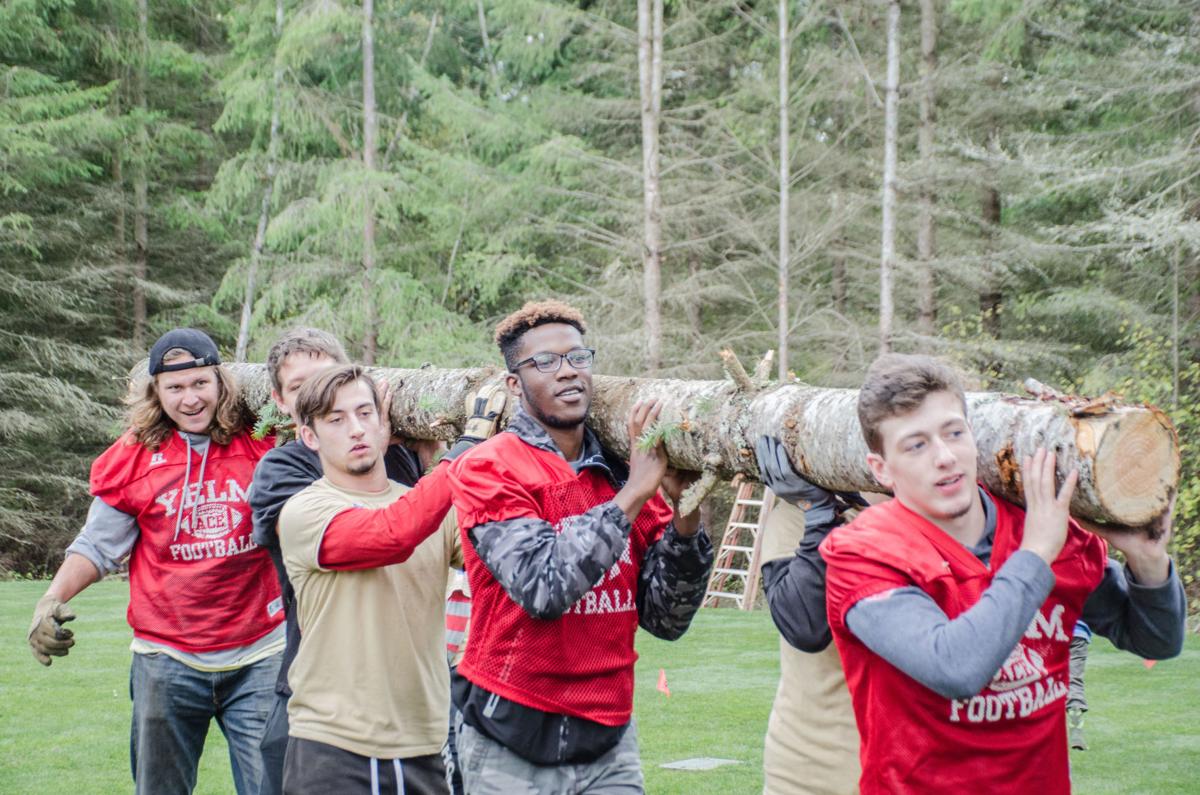 Fresh off a win against the Capital Cougars the night prior, athletes from the Yelm High School football team shoulder a tree stump off Sgt. Aaron Boyle’s property Saturday morning.

Dozens of cars and even a school bus lined the rural community roads of 149th Avenue and Mountain Vista Drive Saturday morning as more than 250 individuals showed up to help landscape the property around Aaron Boyle’s new house, which was donated mortgage-free by a nonprofit and is currently being retrofitted to accommodate his needs.

Families, friends and even strangers — some from as far away as Snohomish — drove out to lay sod, plant shrubbery and move topsoil at the event, which began at 10 a.m.

More than 300 hours of work were volunteered in total, with 12,000 square feet of sod rolled out and about 100 trees and shrubs planted.

Groups that attended included about 50 Yelm High School athletes and coaches and members from Wilson High School’s JROTC, of which Boyle is a former member. Work took a little over an hour to finish because of the large turnout.

Boyle, who currently lives in Roy, will move into his new Yelm residence this December. In 2010, while serving in Afghanistan, Boyle stepped on an improvised explosive device. The explosion resulted in the loss of his right arm and right leg in addition to damage to his left leg.

Gaylord Strand, head coach of Yelm High School’s boys wrestling team, was in attendance, clad in a plaid shirt, jeans and boots. He heard through Facebook about the event and coordinated with coaches to get athletes to attend.

“It’s a big sacrifice for our freedom. Any chance you get to help out a hero, we need to do it more often,” Strand said in between laying down sod.

Boyle’s soon-to-be four-bedroom, two-bathroom house off 149th Avenue, just outside of Yelm, is equipped and specially adapted to accommodate his wheelchair.

Homes For Our Troops is a donation-based, national nonprofit that helps build and donate specially adapted custom homes nationwide for injured post-9/11 veterans. The nonprofit works with many retired veterans who have lost limbs, helping them find housing that fits their needs in order to assist them on the road to recovery.

As of this year, Homes For Our Troops has built and donated more than 280 custom homes across the country.

The nonprofit purchased the property and began building Boyle’s house earlier this year.

Leilani Boyle, Aaron’s mother, said she was unsure of how many people would come out to assist her son and the nonprofit’s work. Commuting to Yelm from Lakewood, she said she was ecstatic to see the level of community support shown.

“This is so amazing,” she said. “It just goes to show the love and respect people have for our military.”

Even more exciting is the house Boyle will soon move into, she said. The hope is that it’ll give her son the comfort and peace of mind he needs to continue his road to healing.

“This is 100 percent ADA. This is giving him the ability to be the 100 percent father and husband he wants to be,” Leilani Boyle said.

Boyle agreed. His main goal is to be able to give the best to his wife, children and family, he said. And with his new house, it’ll likely help him and his family give back once they’ve begun to fully heal.

“I think by allowing the house, it’ll help me find out who I am without the military. And I think that’s going to be the hardest part,” Boyle said. “Having this free-mortgage home will free up the stress of wondering if we can even pay bills.”

The family has big plans for the future, Boyle said. They’re looking into possibly adopting a foster child. Boyle said he’s also still looking into a possible career as a public speaker, but he admits that might just be part of the healing process.

Public Invited as Roy Veteran to Receive Keys to New Home on Dec. 7

Army Sgt. Aaron Boyle will receive the keys to his new, specially-adapted home off Bald Hill Road at a ceremony at 1 p.m. on Saturday, Dec. 7.