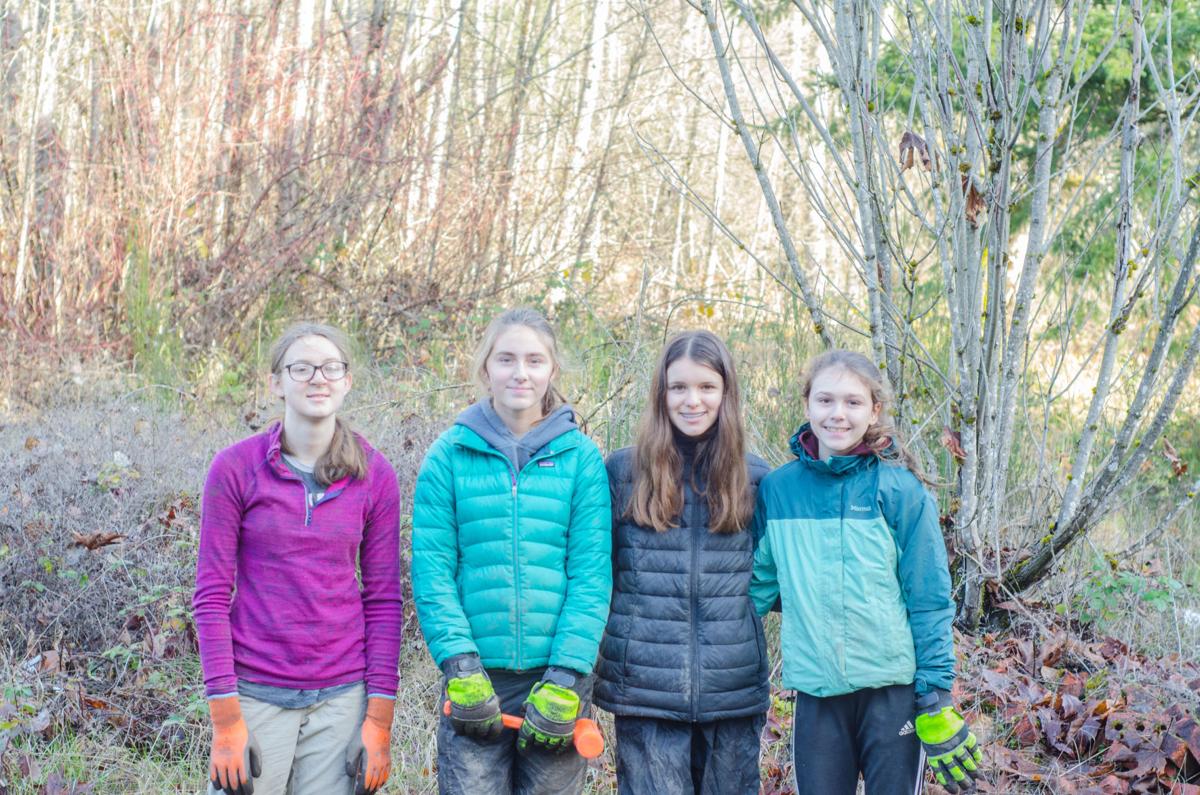 From left, Cassidy of Girl Scout Troop 45261, and Addie, Maya and Maggie of Girls Scout Troop 40116, pose for a photo Sunday morning on the McKenna Reach. These two packs are helping the Nisqually Land Trust with tree and shrub planting to help the local ecosystem. In return, the group of four cadettes will receive their Girl Scout Silver Award. 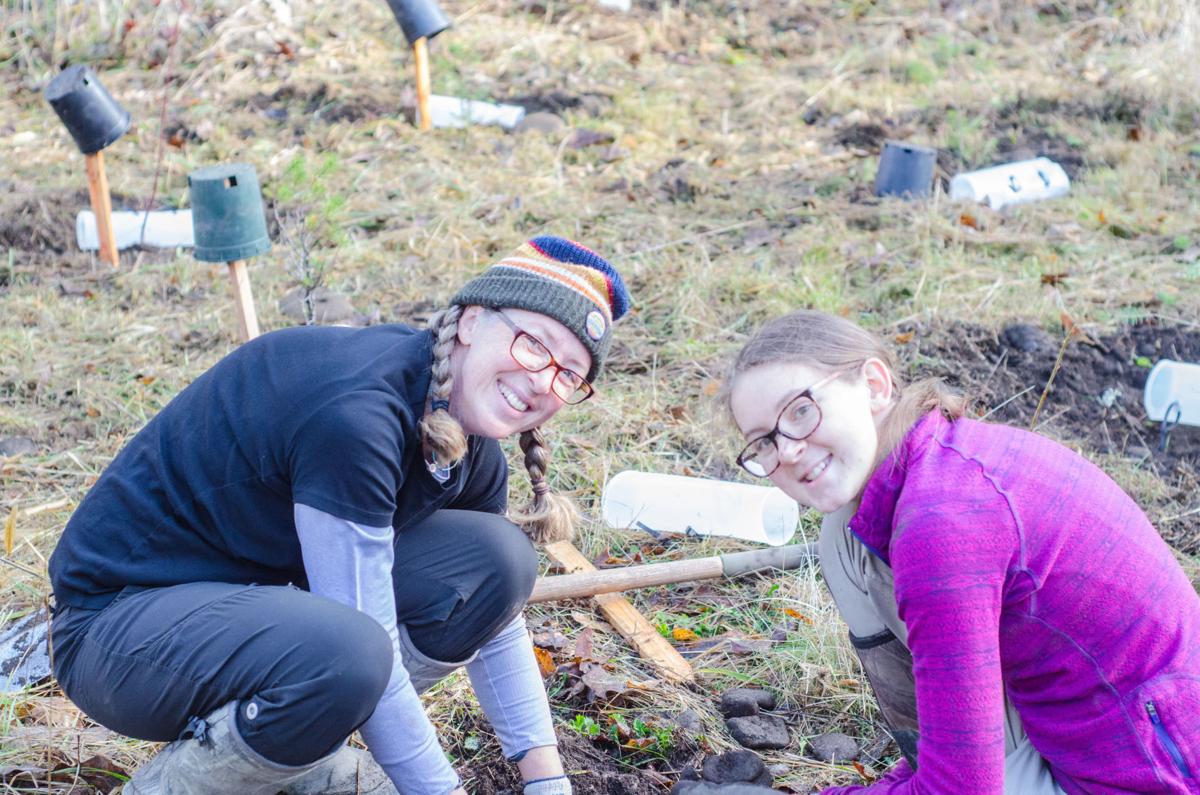 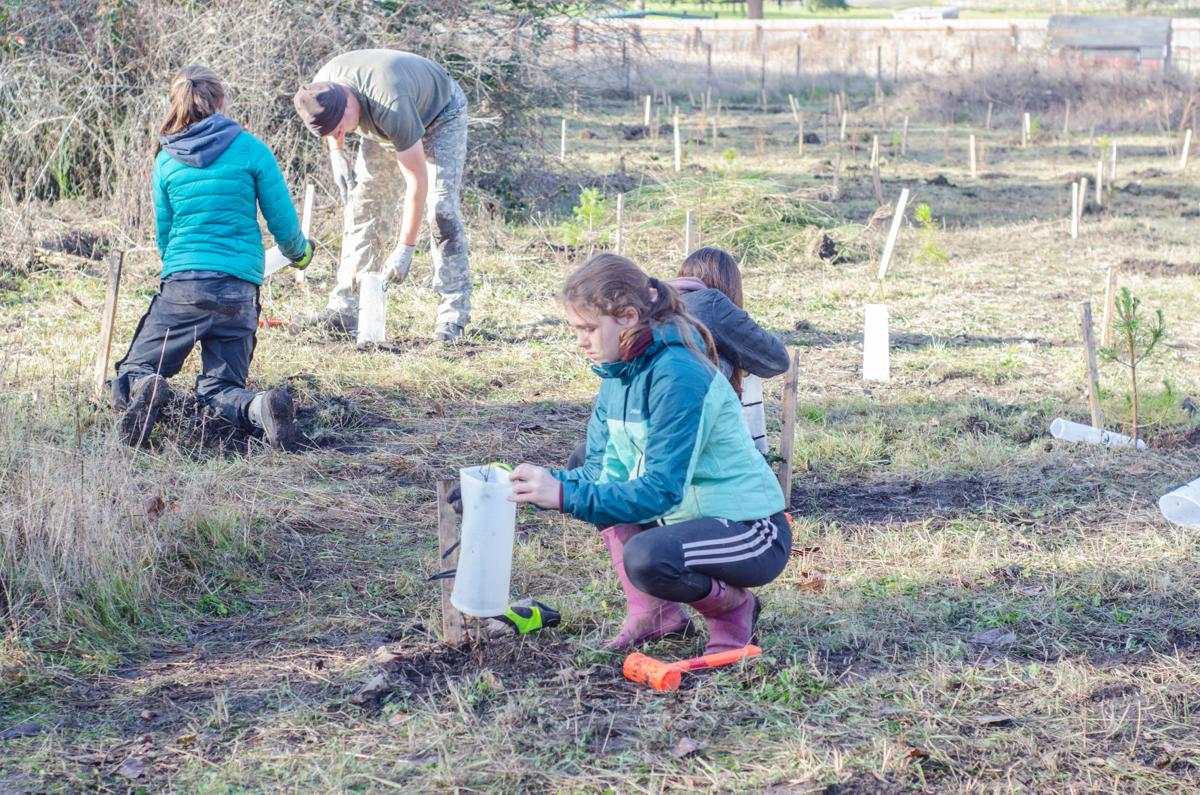 About 40 volunteers showed up over two days last weekend to help plant trees on a property recently purchased by the Nisqually Land Trust.

Four Cadettes from Girl Scout troops 45261 and 40116 planted roughly 500 salvaged saplings and nursery shrubs along a parcel of the McKenna Reach last weekend.

The two-day effort was one of the final projects the troops participated in through collaboration with the Nisqually Land Trust, which purchased the property totaling 4 acres a year ago in an effort to block residential development on fragile river shoreline.

Addie Schlussel, land steward of the Nisqually Land Trust, said the goal is to create a healthier floodplain along the Yelm-McKenna shoreline.

“By planting up the river, (the trees) can help erosion and the water quality nearby,” she said.

Over two days — Saturday, Nov. 23, and Sunday, Nov. 24 — about 40 volunteers helped the troops pack saplings and install plastic tubes to deter rodents and other pests.

Tracy Trople, Girl Scout 40116 scoutmaster out of Olympia, said most of the project was spearheaded by the four Cadettes.

It wasn’t long before they started work on the project, which began with removing and burning invasive blackberry plants and Scotch broom weeds.

“My daughter wanted to do something to save the orca whales,” Trople said.

The hope is that their efforts will help restore Chinook salmon habitat along the Nisqually River, ultimately leading to more food for the native orca whales that reside in the Puget Sound and Pacific Ocean.

Addie, Maya and Maggie, the three Cadettes from 40116, said their favorite part of the project was planting the conifer saplings and installing the tubes. They also said working out along the Nisqually River on the weekend beats sitting in class.

Sarah McCarthy, a volunteer coordinator with the Nisqually Land Trust, said the best part about working on conservation efforts like this is seeing the youth get excited about the work and overall mission.

“And then they can come back and see the forest they planted years before,” McCarthy said.

Alex Chaney, father of Cassidy, a Cadette from Troop 45261, said he’s been volunteering with the Nisqually Land Trust for about two years and comes out regularly to help with the grunt work.

“What better thing is there to do in the world than plant trees?” asked the retired Army staff officer.

Kirk Hanson, Maya’s father, also helped the troops with their project and said he was proud of his daughter for the work she put into the project.

The Hansons own about 200 acres of forest land they use for a tree farm, Hanson said, so he wasn’t expecting rampant enthusiasm from his little girl. But he said the girls have taken to the project with admirable passion.

“This is par for the course for her,” he said. “I’m just proud of her for coming out on a weekend and doing it herself … She loves being in the woods, loves being outside. I think it’s in her blood.”

The work isn’t quite over yet. Schlussel said the girls plan on returning to the reach in early December to mulch the trees and check up on the project’s progress.