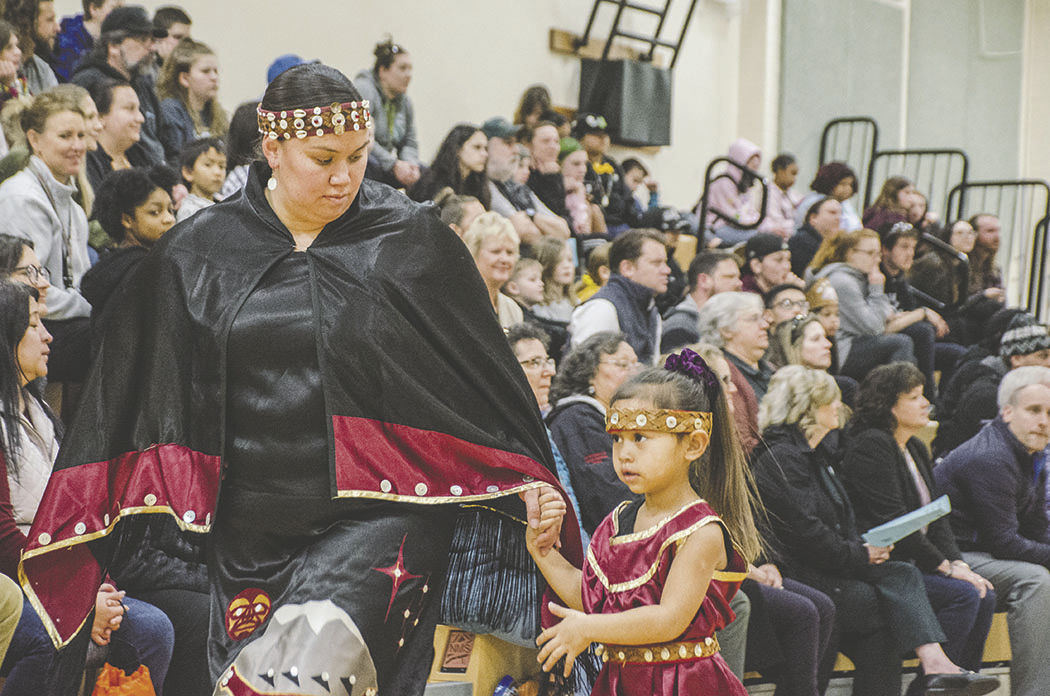 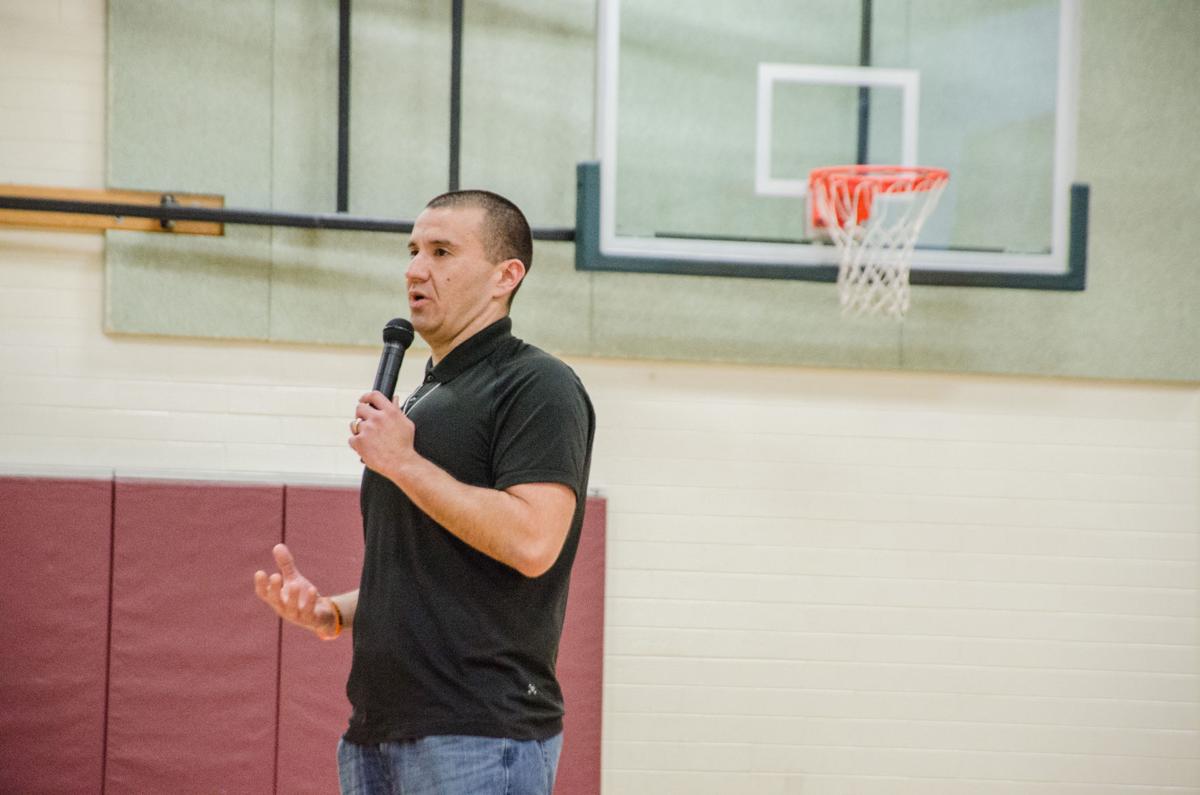 Willie Frank III, son of renowned Nisqually environmentalist Billy Frank Jr., talks Wednesday during a celebration of his father and culture. “You’re seeing a change in people wanting ot learn our history, the Nisqually culture and who we are,” he said. 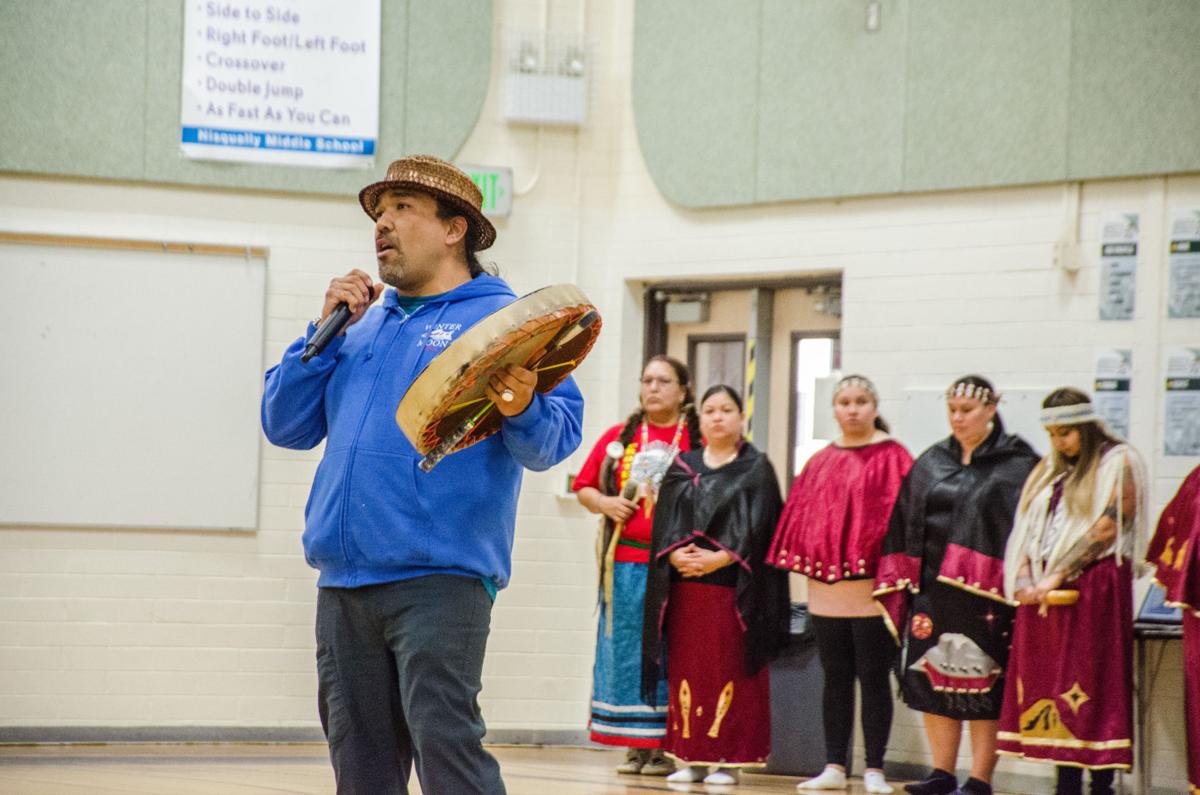 Nisqually Tribal councilor Hanford McCloud speaks to a crowd of 300 or so Wednesday afternoon, in between songs at a celebration of Billy Frank Jr. and the tribe’s culture. 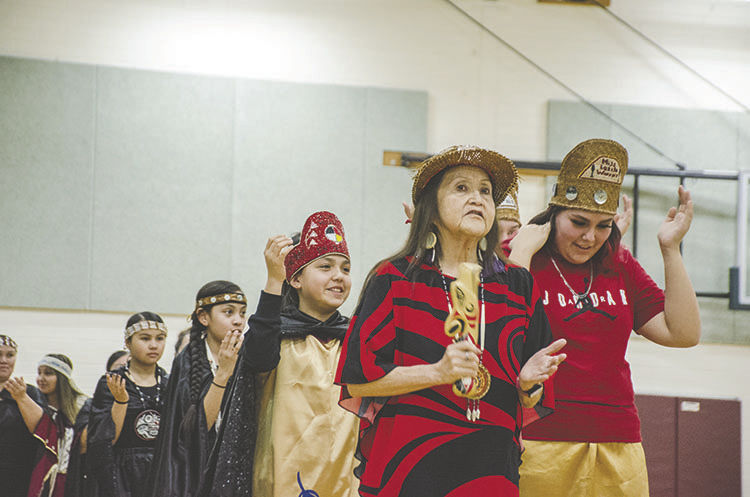 Members from the native tribe sing and dance Wednesday during a celebration of Billy Frank Jr. and the Nisqually Indian Tribe. 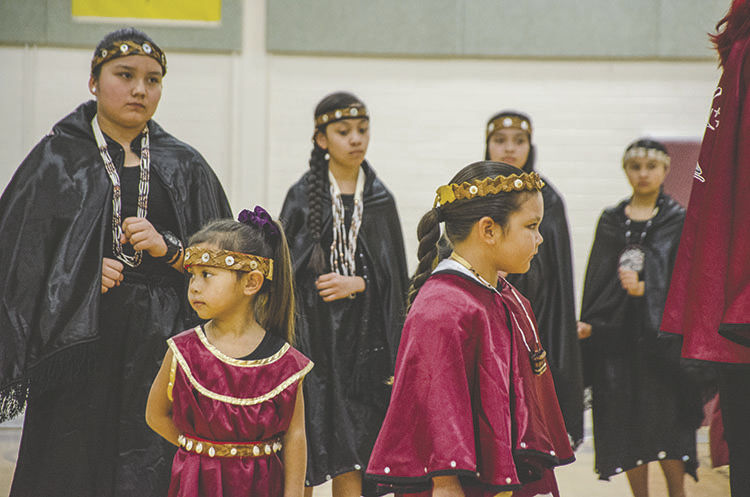 Tribal members sing and dance Wednesday during a celebration of Billy Frank Jr. and the Nisqually Indian Tribe. 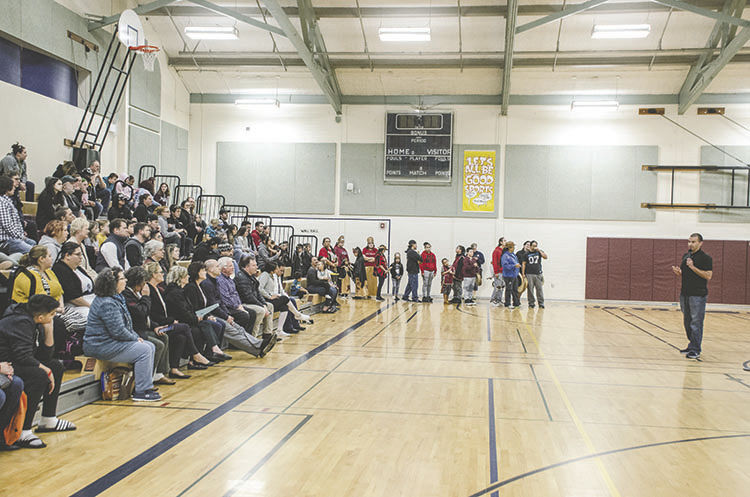 Around 300 or so people gathered Wednesday for a celebration of the Nisqually Indian Tribe’s culture and to remember Billy Frank Jr. This was the second consecutive year the event was held at Nisqually Middle School. 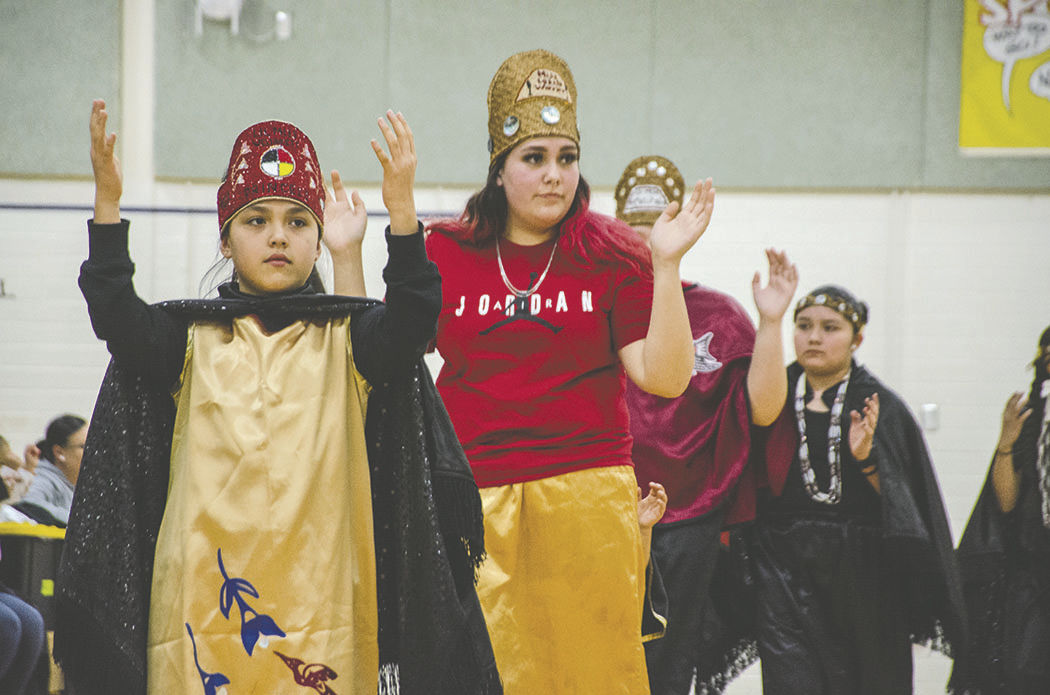 Tribal members sing and dance Wednesday during a celebration of Billy Frank Jr. and the Nisqually Indian Tribe.

Over the sounds of singing and rhythmic drums at the Nisqually Middle School gymnasium, 4-year-old Ila’lani McCloud clasps the hand of her mother as the two dance in line with other performers of the Nisqually Indian Tribe’s Canoe Family.

As the two step along, Iwalani McCloud, 34, brings her hands away from her daughter and raises them in sync with other dancers.

Smiling, and likely wanting the attention of her mother, Ila’lani begins touching Iwalani’s native shawl and hiding underneath it like a fabric hideout.

That was just one of the many scenes on Wednesday, March 11, during the second annual Billy Frank Jr. celebration event at Nisqually Middle School. Multiple generations of tribal families attended the performance to celebrate their culture and identity and recognize one of the nation’s most prominent environmentalists, who died in 2014.

The event was planned in collaboration with North Thurston Public Schools and a dozen other partners. About 300 people showed up for the event.

This year's celebration was also a bit different for a few reasons.

In order to better recognize the Nisqually people as an independent, sovereign nation, and to acknowledge the tribe’s long history, North Thurston Public Schools began flying the Nisqually Indian Tribe’s flag at 25 of its sites around the district this year.

On Nov. 5, the district’s board of directors also passed language for a formal land acknowledgement, which is the practice of opening meetings and events with a statement recognizing the indigenous inhabitants of the land.

These are just some of the things the district is working on to acknowledge the region’s historic disenfranchisement of indigenous peoples and to help engage the indigenous youth of the area.

“This would never happen 22 years ago. But I know my dad and many others would be ecstatic to see this,” said Willie Frank III, the son of renowned environmentalist and native fishing advocate Billy Frank Jr.

Frank III, also a Nisqually tribal council member, said one of the most important parts of the celebration is the recognition of Nisqually tribe culture and having students of the district learn about his father’s work.

Over the last month, students from North Thurston Public Schools have been working on presentations, educational resources and art projects focused on Frank Jr. and the Nisqually Tribe. In a separate gymnasium, and throughout the school’s hallways, dozens of projects were on display for the public and tribal members to examine.

“It’s such a rich history we have,” Frank III said. “It's important they understand our culture and love for the natural resources.”

Michael Smith, assistant principal at River Ridge High School, said he has been collaborating with Frank III on educational opportunities for about two years now.

The school has developed a native’s perspective history class and is looking to build a native scholars program, which would offer formal courses in native arts and history taught by the tribe. It would also offer the Lushootseed language as a course in the world language department.

This is all in an effort to engage the school’s tribal students and youth, which currently make up about 2 to 3 percent of the population in the classroom.

“The things we do at River Ridge is something that’s never been done in the state,” Smith said.

According to the school’s website, its primary behavior gap goal is to increase the percentage of regularly attending native students by 12.5 percent.

Hweqwidi Hanford McCloud, a tribal council member, was also present at the celebration and helped lead the group with its songs.

“It’s really important to not only honor our ancestors, but those that took a stand and paved the way for the next generation,” he said before the ceremony alongside his children.

McCloud views this event as a comprehensive educational tool not only for the school but for the community.

He added that he’d like to see something similar organized with the Yelm Community Schools district, but more focused on the history of the prairie.

Mel Hartley, president of the North Thurston Public Schools board of directors, said there’s been a lot of progress that has been made over the last few years between the tribe and school district on equity.

“It has been an amazing journey for the school because the Nisqually tribe has been our neighbor since the beginning of time, since we got here. We haven’t always worked with them as an equal partner,” Hartley said.

The school board, Hartley said, now meets with the tribe twice each year to discuss the two bodies’ relationship. The hope is that indigenous students will be the benefitting party of this collaborative effort.