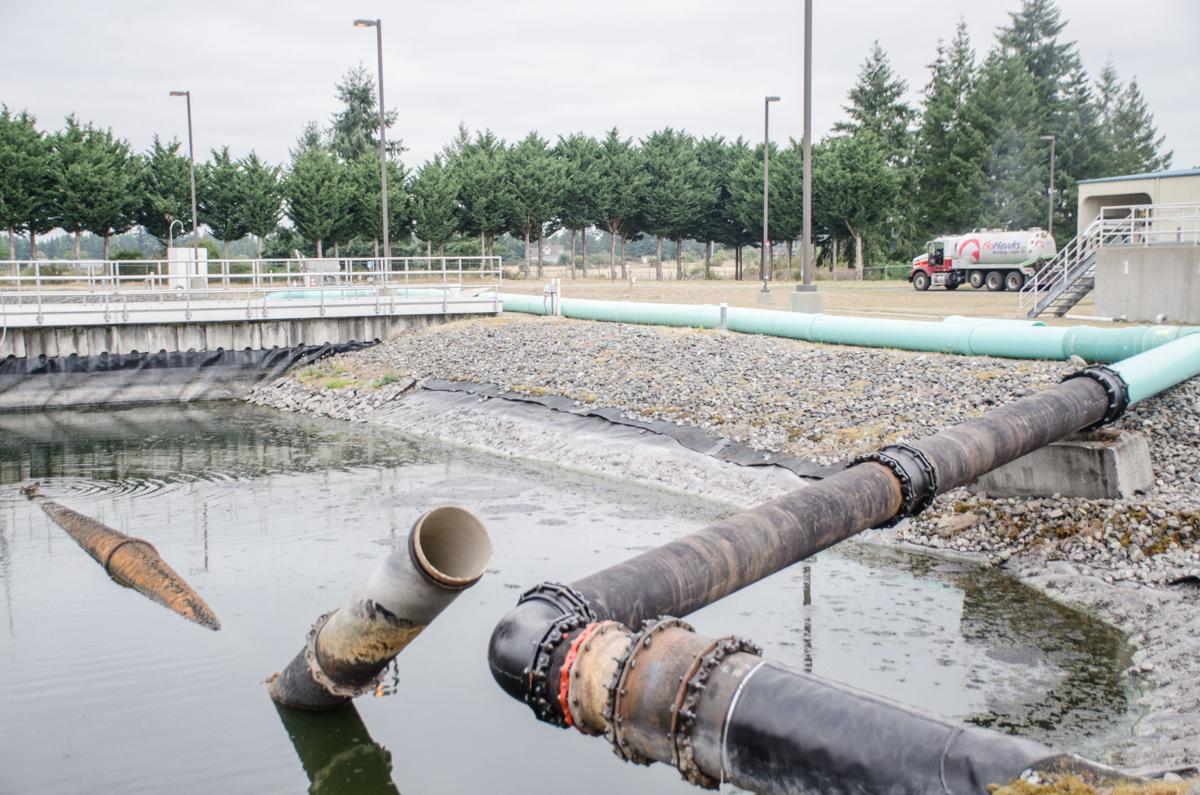 Treatment plant employees last year installed an external line that bypasses one of its EQ basins, which was temporarily out of operation. 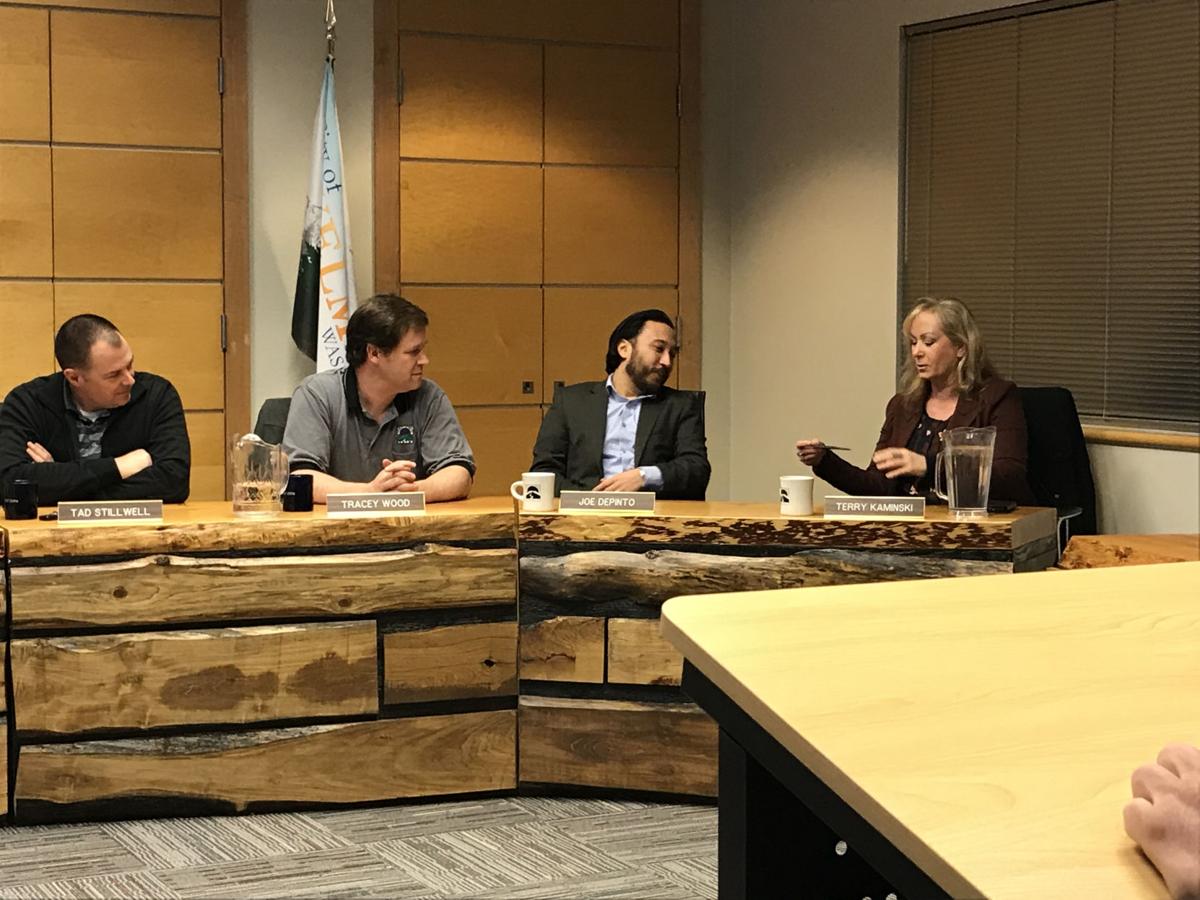 In the coming months, the Yelm City Council will likely choose from one of four consultant-recommended options to repair and ensure the longevity of the city’s wastewater reclamation facility.

Those proposed fixes could cost between $16.9 million and $24 million, according to estimates.

Five of Yelm’s seven council members asked questions and listened to a presentation led by staff from Parametrix, an engineering and environmental firm hired by the city, during a special meeting session Tuesday, Feb. 18.

Yelm Mayor JW Foster said that while fixing the issue of the city’s aging wastewater treatment facility will be at a potentially steep cost to the city’s water customers, it’s a necessary step the city must take to preserve the system, which feeds reclaimed water out to Cochrane Memorial Park, the Centralia Canal and Nisqually River.

“Parametrix and our staff have made it very clear what our options are going forward, which are all expensive yet necessary. Whether we grow this city or stay at its current size, we have no choice but to provide the citizens with clean drinking water ... Yelm is held to a higher standard due to its proximity to the Nisqually and shallow aquifers,” Foster said. “We’re at that point where the wastewater treatment facility has to be remedied.”

Foster said the council will make a decision on which option they feel is best, then move forward with how to pay for it. He and the city’s executive branch will then look at what financial help the city can garner from the state Legislature, grants and other avenues to help pay for the upgrade.

With these recommendations, the goal is to expand the planning horizon to 2045, replace aging infrastructure and hazards, improve energy efficiency, decrease the cost to operate the facility and maintain it, and increase design capacity, Parametrix staff said.

Membrane bioreactors are a comprehensive filtration technology that breaks down the wastewater that is flushed down resident’s drains. The city’s Treatment Plant Manager Bill VanBuskirk previously said the technology is 10 times as efficient as the city’s current sequential technology, and also faster.

Much of the city’s current system is just too old, Brian Bunker and Doug Berschauer, of Parametrix, told the council during the meeting. For portions of the dated facility, manufacturers aren’t even making new parts, they said, adding that the lack of parts can be unsafe as staff members attempt to find roundabout ways to keep operations online.

“When you buy a car, you can do everything you can to take care of it, but sooner or later the maintenance just starts creeping up and you end up doing more work,” Bunker said, adding that there are also many unreliable valves.

The system also has difficulties with removing nitrogen and ammonia gas from treated wastewater, which has affected the city’s permitting eligibility with the Washington state Department of Ecology.

According to Parametrix, the City of Yelm is currently at risk of facing fines, third-party lawsuits and enforcement action from Ecology with its current system.

There are also issues the city could potentially deal with in regards to growth and providing basic services. The plant is currently operating at 85 percent capacity, according to Parametrix staff, and in its current form does not allow the city much room to grow.

The current wastewater reclamation facility was originally built in two phases. In 1993, the base of the system was built. Then, in 1999, the city’s sequential batch-reactors went online. It was the first treatment plant in Washington state to produce class A reclaimed water.

Foster said it was actually a lawsuit that brought about Yelm’s action to install its comprehensive facility throughout the 1990s. The plaintiff in the case helped to regulate the city, which Foster said was polluting the Nisqually River back then.

“The people who brought forward that suit are waiting in the wings to bring it again if at any point we fail in our processes,” Foster said. “It’s not if they will. It’s when they will, based on what we can accomplish as a city.”

Over the last few years, the city has spent just under $1 million in upgrades and maintenance for the facility.

The two other options put forward by Parametrix staff are to either retrofit for ballasted sludge or simply optimize the facility as it currently exists. But Parametrix staff aren’t confident they’ll fix the underlying issues of capacity and state permitting non-compliance.

“It would be pencil on paper,” Bunker said of optimizing the current facility. ”The existing basins, I think, would probably fail.”

Optimizing the facility would cost $16.9 million and is the least likely to succeed, they said. The ballasted sludge option would cost $24 million.

On March 3, the Yelm Council will host another study session with contractors from Parametrix to further discuss costs.

After the city makes a decision, it will aim for April to begin the design phase of the selected project.