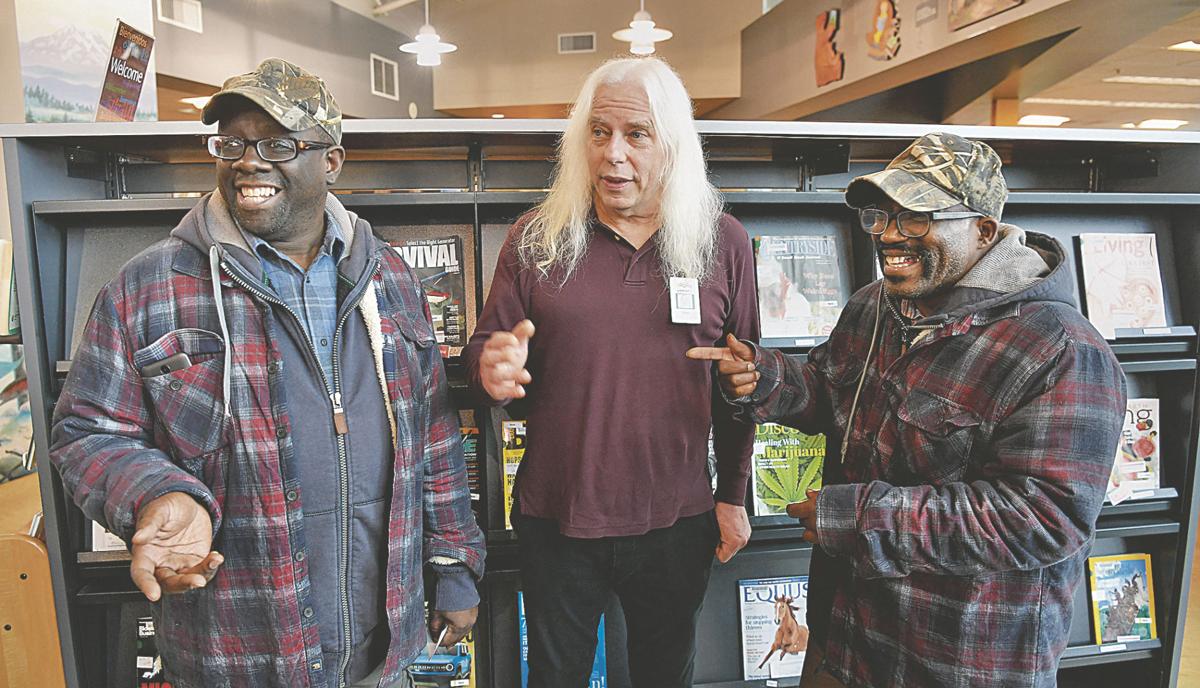 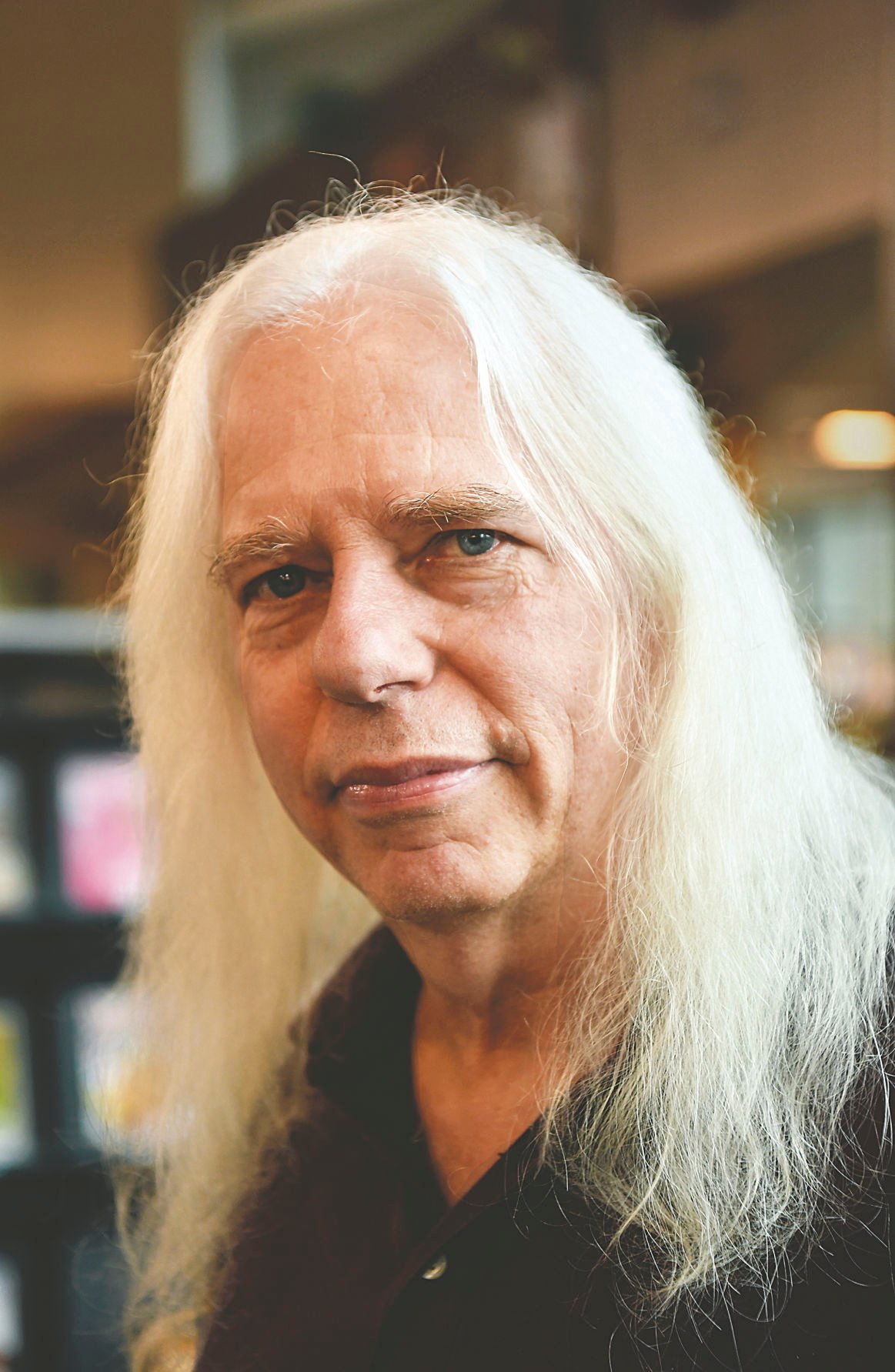 Mike McGowan, 63, public services specialist at the Yelm Timberland Library, has worked his magic at the branch for the past 25 years, specializing in children's programming and reference services.

Imagine this dream, if you dare: Bronx bomber Mike McGowan’s dancing a jig on second base in Yankee Stadium after smacking a ground-rule double. But fans notice almost immediately that both pockets on his pin-striped uniform are bulging with … well, it’s hard to tell.

McGowan, grinning like a cheshire cat from his perch in the infield, pulls out from one pocket a giant Nathan’s Famous hot dog that’s easily a foot longer than the bun that precariously cradles it. He raises the dog to the sky.

From his other pocket — he’s grinning wider now — he pulls out a billy clubbed-sized, dripping, kale-green kosher pickle that would make any true New Yorker drool with pride. He raises that, too, to the sky.

He does — one gulp after another until dog and pickle are but messy memories.

It all makes perfect sense. Really.

“You know, when I was a kid, all I wanted to be was a baseball player in the summer and own a deli (New York delicatessen) in the off season,” McGowan said recently.

Then he became a librarian.

“Nothing ever replaced that dream (of baseball and deli) until the library,” he added, “and I never expected to get the job.”

The New York City native, now 63, has worked at the Yelm Timberland Library for 25 years, his current title of public services specialist allowing the gregarious man with the shoulder-length flowing white hair some latitude to shape his job as he envisions it.

He spends much of his time creating and performing programs for children — his outreach often taking him to Yelm-area schools far and wide. When he’s not performing for kids, he’s often answering difficult questions as the Yelm branch’s reference librarian.

He’s good at both, said his boss, Library Manager Erica McCaleb, who has been at the library for nine months.

“Mike has a genuine desire to help others, and that’s the core of his effectiveness,” McCaleb, 30, said recently. “He’s very personable and outgoing.”

McGowan, who served on the Yelm City Council from 2006 to 2015 — resigning his position when he moved out of the Yelm city limits to unincorporated Thurston County — knew from the get-go that the library was his true destination.

“I was halfway through my library interview when I realized that I really wanted this job, and not just the paycheck,” said McGowan, who has a bachelor’s degree from the University of New York at Buffalo. “I really enjoy the work, and it’s particularly satisfying because I probably get to see people at their best.”

McGowan would undoubtedly include frequent library patrons Lanakila Washington and his husband Reginald Ross among them. The Yelm couple has known McGowan for six years.

Said Washington, 57: “I really enjoy Mike because of his kindness and the fact that he always has a story to share.”

Ross has similar feelings: “His knowledge of the library is extensive, he’s kind, he makes you laugh when you're feeling bad — and most of all, I like his hair.”

All of that — including the distinctive locks — undoubtedly amplify McGowan’s ability to mesmerize kids during his school outreach programs.

“I really like going to the schools and doing outreach,” McGowan said. “It was like ‘this is what I was made to do.’”

But it didn’t come so easily in the beginning as McGowan painstakingly forced himself to learn on the fly. Little by little, though, he figured out the most effective ways to reach his young audiences.

“My first library program was based off The Ed Sullivan Show,” he recounted. “I had skits and music acts — all I would have needed was Topo Gigio, and it would have been complete.”

From there, McGowan shifted to half-hour game show themes that kept his kids enthralled and interactive.

“By this point it felt like I belonged here, and I knew what I was doing,” he said. “I think there was a hidden showman in me I didn’t know was there until I did my first school program. I connected with the kids, and it’s what I do best.”

But it’s often his more somber moments — particularly in his role as the library’s reference guru — that stick in his mind. It’s not always pleasant.

“Patrons may be going through situations with their families or need information about a medical diagnosis they’ve been given,” he said. “You get connected to how people are feeling both good and bad, and if I can help them it’s satisfying for me.”

The goal, McGowan said, is getting to the core of their issues — and that takes persistence.

“I look at myself as a guide who helps people find what they really need,” he said. “And that requires digging down beneath their initial questions and getting to the real answers.”

“Whatever action I’m taking for patrons, there’s an equal reaction I’m receiving from them — and it’s satisfying for me one way or the other.”

That’s true for McGowan even after 25 years — because nothing remains static.

“The people, their questions and other needs change all the time — and that keeps it fresh,” he said. “As in most situations, it always comes down in the end to the people. I’ve learned over the years how to connect with people about what they want, but I wasn't able to do that when I started.”

And though he loves his job, McGowan doesn’t spend all of his time in the library.

He spends special time with his daughter and two granddaughters — “the joy of my life” — who live next door to him, and he still digs sports. You might see him playing basketball or stickball or tennis or even roller skating, but you’re probably never going to see him prancing around second base at Yankee Stadium.

Unless, of course, you have ultra-weird sports dreams about men with long white hair.