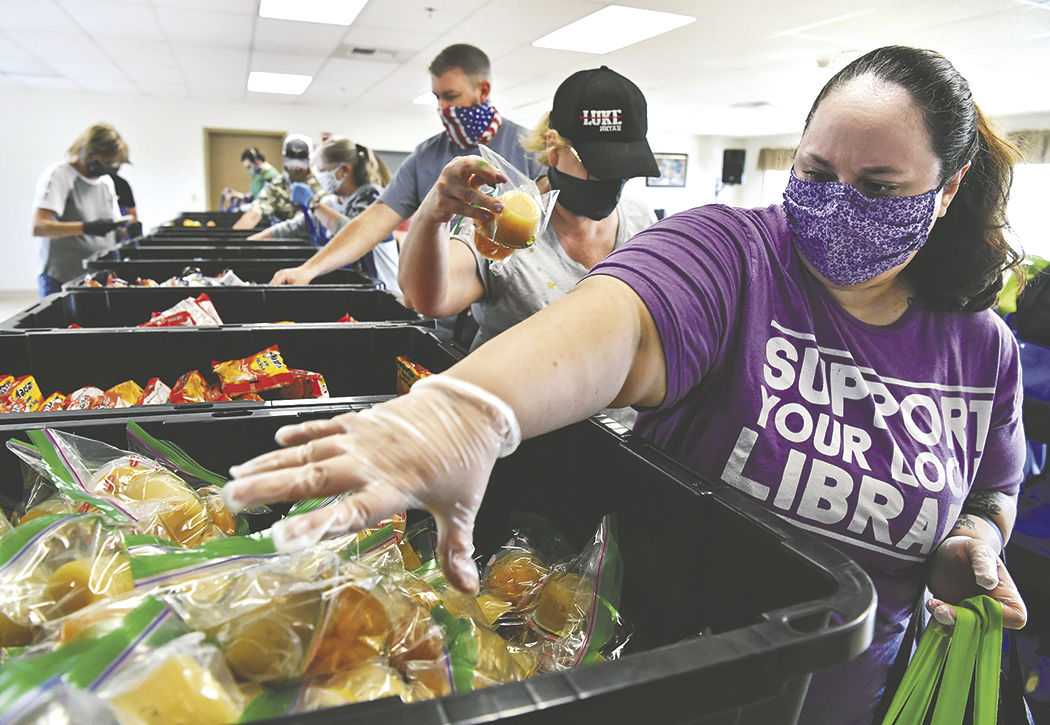 Yelm resident Erica McCaleb, 30, grabs containers of fruit cups to add to her bag on Sunday, July 12, at the Yelm Senior Center. McCaLeb was among a group of Rotary Club of Yelm members and volunteers loading food bags for the club's "10 Weeks of Summer Lunch Program." 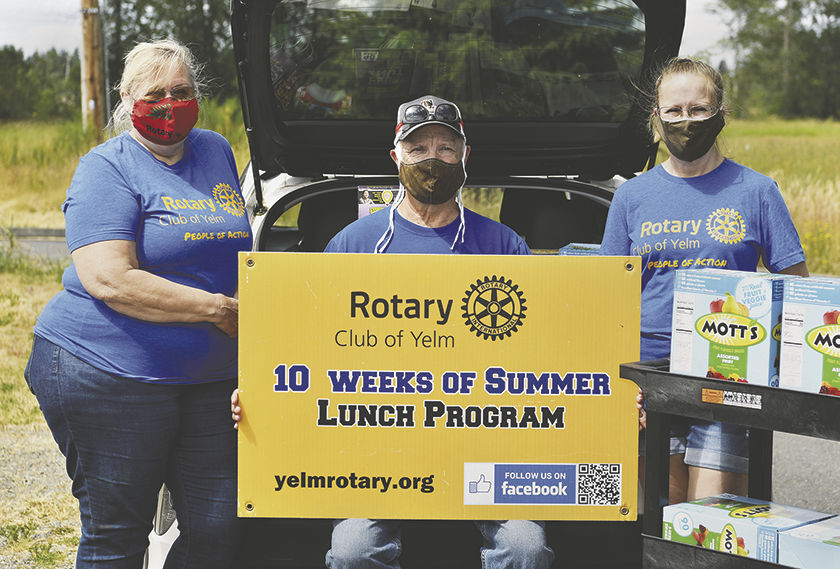 L-R: Rotary Club of Yelm members Sandi Hanson, Larry Hanson, and Kathy Kruize bought food on Friday, July 10, for the club's "10 Weeks of Summer" feeding program and stopped at the Yelm Senior Center to unload it. 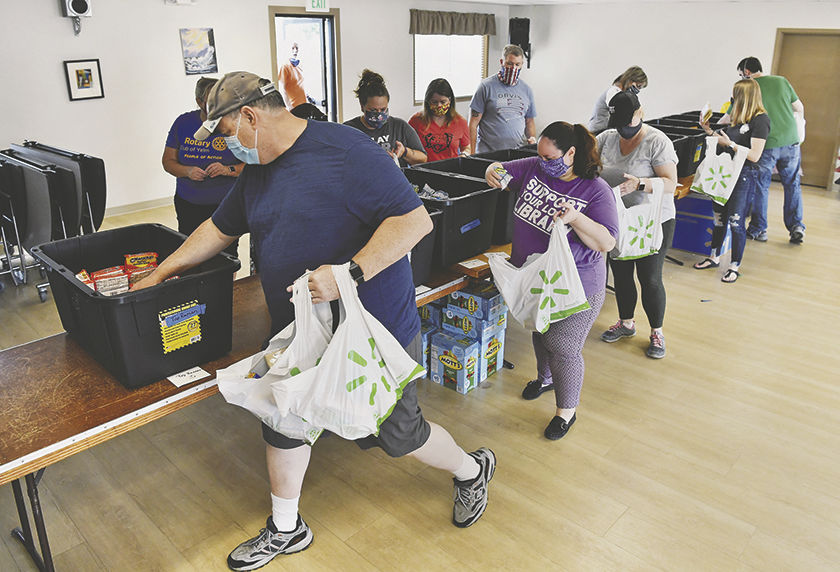 Volunteers and members of the Rotary Club of Yelm bag food on Sunday, July 12, at the Yelm Senior Center for the Rotary's "10 Weeks of Summer Lunch Program."

Mother Nature was already lacerating the skies above Western Washington by the time the first case of COVID-19 appeared in the United States on Jan. 21.

By then, rain had fallen virtually every day of the month and would continue into February when by Feb. 6 a foot of water had drenched the area. The Nisqually River took the brunt of the deluge, flooding well beyond its banks and causing widespread damage to houses in the Nisqually Delta.

It was about this time one cold, soggy day that a far less sensational, but no less heartbreaking drama presented itself at Yelm High School.

The circumstance — of seemingly little consequence in a world about to be eviscerated by flooding and disease — would nevertheless serve to illustrate the core values of an altruistic Yelm institution about to celebrate its 10th anniversary.

On this particular dreary morning, a Yelm High School student arrived at school wearing no shoes and no socks — presumably not to protest school dress codes, but because he just didn’t have any to wear.

Word about the student’s plight soon made it to the school nurse’s office, and within minutes she was on the phone with a member of the Rotary Club of Yelm. That member subsequently called Sandi and Larry Hanson — husband and wife charter members, past presidents, and all-around dynamos of the service organization — to relay information he’d received from the nurse.

And before the Rotarian could say “help is on the way,” the Hansons were browsing the shoes and socks isles at Walmart, eventually deciding on a pair of black, low-top tennis shoes and a packet of white, athletic-style socks they thought the student might like.

Then, after a quick run to the high school to hand off said shoes and socks to the nurse — who gave them to the student — the Hansons wound their way back home knowing they’d helped a kid in need and simultaneously adhered to the Rotary creed of “Service Above Self.”

“It’s all about giving back to the community,” said Larry Hanson, 74, noting the variety of ways Rotary tries to serve its neighbors by focusing its lasers on the area’s youth. “It just makes me feel great, and I can get pretty emotional about it.”

Added Sandi Hanson, 64: “We really like to help other people who are less fortunate. It’s ingrained in us to serve and help others who need it.”

And for the past 10 years, the Hansons and at least some of the other 21 Yelm Rotarians who have been around that long have lived up to that service model. The Yelm club, they say, is particularly youth oriented — both by choice and by need.

“We just have a general commitment to the kids in the community,” Larry said. “There’s a lot of poverty in the area, and sometimes the kids don’t have a choice on how they are being brought up. There is a general population of needy kids and lots of social issues.”

With all of that and more happening in most years — barring a catastrophic pandemic — the Rotary can always use new blood. And this year, that’s where Yelm resident Kathy Kruize takes a bow. Kruize, 57, who calls herself the club’s “head worker bee,” joined Rotary in November 2019 after meeting members at Yelm Prairie Lanes where she worked.

“I took a liking to the fact that they focus on kids,” she said. “They’re like a family, and they joke with each other and there’s a lot of camaraderie. I just want to help, and that’s about all there is to it.”

The club’s focus since June 23 has been on its “10 Weeks of Summer Lunch Program” targeted to students 18 years and younger and their families who qualify for the National School Lunch Program free and reduced-priced lunches. And this year — because COVID-19 forced schools to close in March — the Rotary Club instituted a temporary hybrid feeding program in April that added a couple of weeks to its usual 10-week schedule.

The 10 Weeks of Summer Lunch Program — launched in 2017 — was inspired by a seemingly simple fact: For some students, summer vacation was no picnic in the park.

Sandi explained: “We realized that even though school stopped for summer, the kids were still hungry. And some of the kids didn’t want to leave school because they wouldn’t have food.”

So the Rotary stepped in to help remedy the situation — though this year the 10 Weeks of Summer Lunch Program has faced particularly harsh challenges because of COVID-19. The virus, for instance, has crushed normal fundraising avenues. In normal years, the club could expect to raise approximately $8,000 from its largest fundraising events — the Prairie Stampede 5k, Bowling Challenge and Home Show & Raffle — all cancelled this year.

“So we’ve had to rely a lot more on grants and donations this year, because we had no fundraisers,” Sandi said.

But considering the enormous hole from which it needed to climb, the club has done pretty darn well for itself.

To date, it has received $28,500 in grants and donations from a variety of sources — just about meeting its $30,000 food bill that covers each summer program. The money haul has fueled Sandi Hanson’s cautious optimism.

“I trust we are going to make it this year,” she said, not quite tongue in cheek. “I’m not afraid to ask for help.”

Despite the challenges, the bullish phrase “it’s in the bag” could very well describe the Rotary’s 10 Weeks of Summer Lunch Program and the success it’s enjoyed.

Here’s how it works: At one of four predetermined distribution sites, each Yelm-area child 18 or younger per family receives one bag of food a week intended to provide breakfast and lunch for that week. The bags include canned tuna, canned chicken, ravioli, chili, milk, juice, granola bars, Top Ramen, snack crackers and cookies, microwave popcorn, instant oatmeal, macaroni and cheese, and fruit and apple sauce cups.

In addition, the students’ families receive one box of organic produce through Yelm-based Bounty for Families and another box of staple food items — all to last the week until the next distribution. Twice a summer, families also receive hygiene supplies that include soap, shampoo, and tooth brushes.

But filling all those bags has been particularly complicated this summer for one overriding reason: The coronavirus has affected the club’s ability to buy food.

“We’ve had to be creative,” Sandi said. “We’re having to source our food differently so we have enough to put in the bags.”

Much of the food comes from Walmart, some from Costco, some from a variety of food drives, and the rest from about 30 individual donations each summer. But getting the bulk of the food has become trickier because of the coronavirus.

Walmart, for instance, used to offer the program two pallets of food per week, but can no longer do that. And some items can’t be purchased in person because they’re not available in the quantities Rotary needs.

“I can’t buy mac and cheese from Walmart in person, but I can order it online all day,” Sandi said.

And then there are the weekly runs to Costco. It’s a team effort, Larry said.

“It’s a total club commitment on who buys needed items at Costco,” he explained.

Finding enough people this summer to bag and distribute food has also been challenging. During most summers, 30 to 40 people would gather on Sunday afternoons at the Yelm Senior Center to busily bag food, but with social distancing restrictions this year only 10 to 14 people can safely bag simultaneously. And on a recent Sunday, only about five Rotary members showed up to help bag.

Despite the complications, Sandi understands the trepidation some people may have because of the pandemic.

“I’m concerned about being out, and it’s important to me to social distance, wear gloves when we bag, and be especially conscious of the environment we’re in,” she said.

But in the end, when bags are full and ready to be distributed — and Rotary members and volunteers exhale after another week’s frenzy of accomplishment — the effort’s all worth it, Kruize said. Distribution day comes next, and that’s when the rewards of their hard work shines bright.

“The kids are smiling, and the parents are teary eyed and emotional. “It’s a very rewarding experience.”

Much like purchasing low-top, black tennis shoes at Walmart.

Interested in donating to the Rotary Club of Yelm’s 10 Weeks of Summer Lunch Program? It’s easy: Just visit the Rotary Club’s Facebook page https://www.facebook.com/yelmrotary/, click on the “donate” button and choose how much you’d like to offer.

Interested in donating to the Rotary Club of Yelm’s 10 Weeks of Summer Lunch Program? It’s easy: Just visit the Rotary Club’s Facebook page https://www.facebook.com/yelmrotary/, click on the “donate” button and choose how much you’d like to offer.