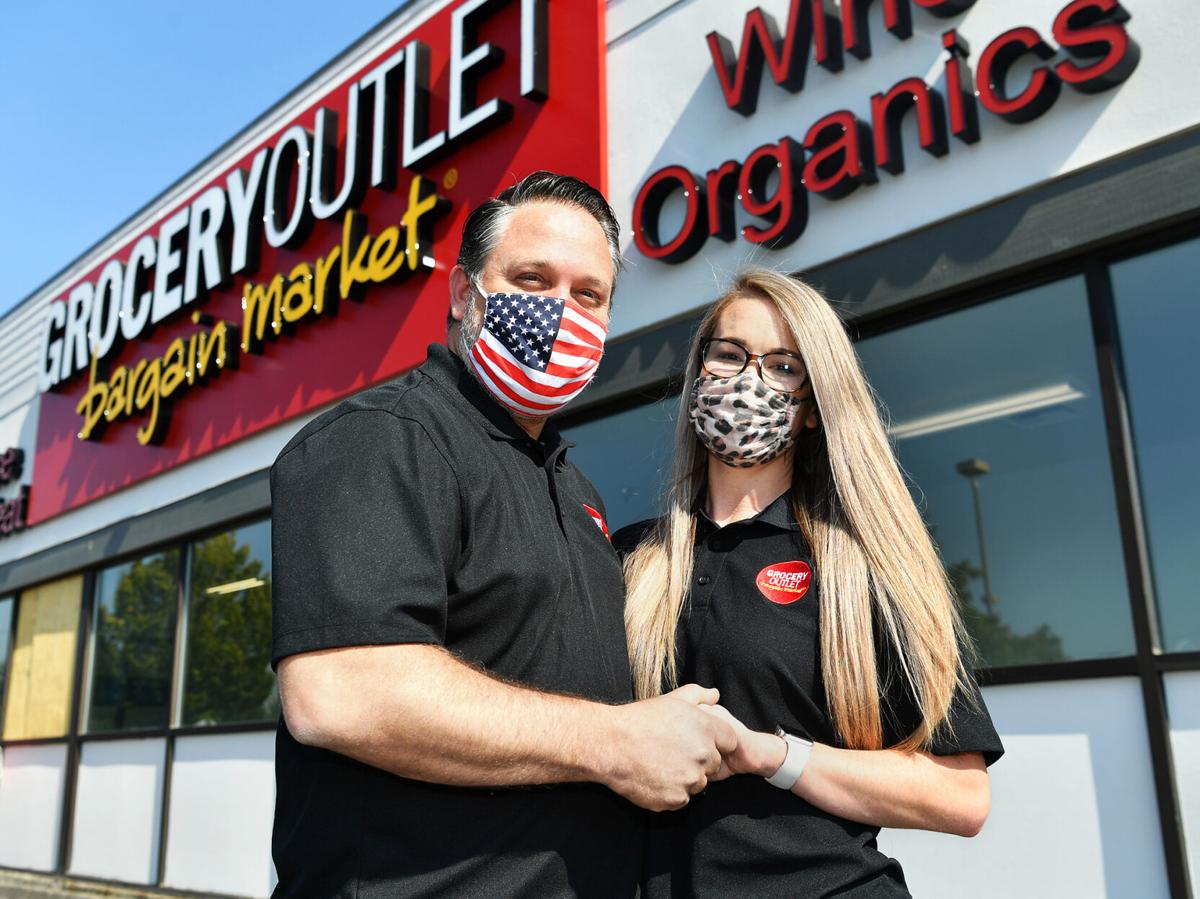 Greg Vinyard, 47, and his wife Stefanie Vinyard, 34, co-own the Grocery Outlet in Yelm that will open on Sept. 17. They're seen here on Wednesday, Sept. 9. 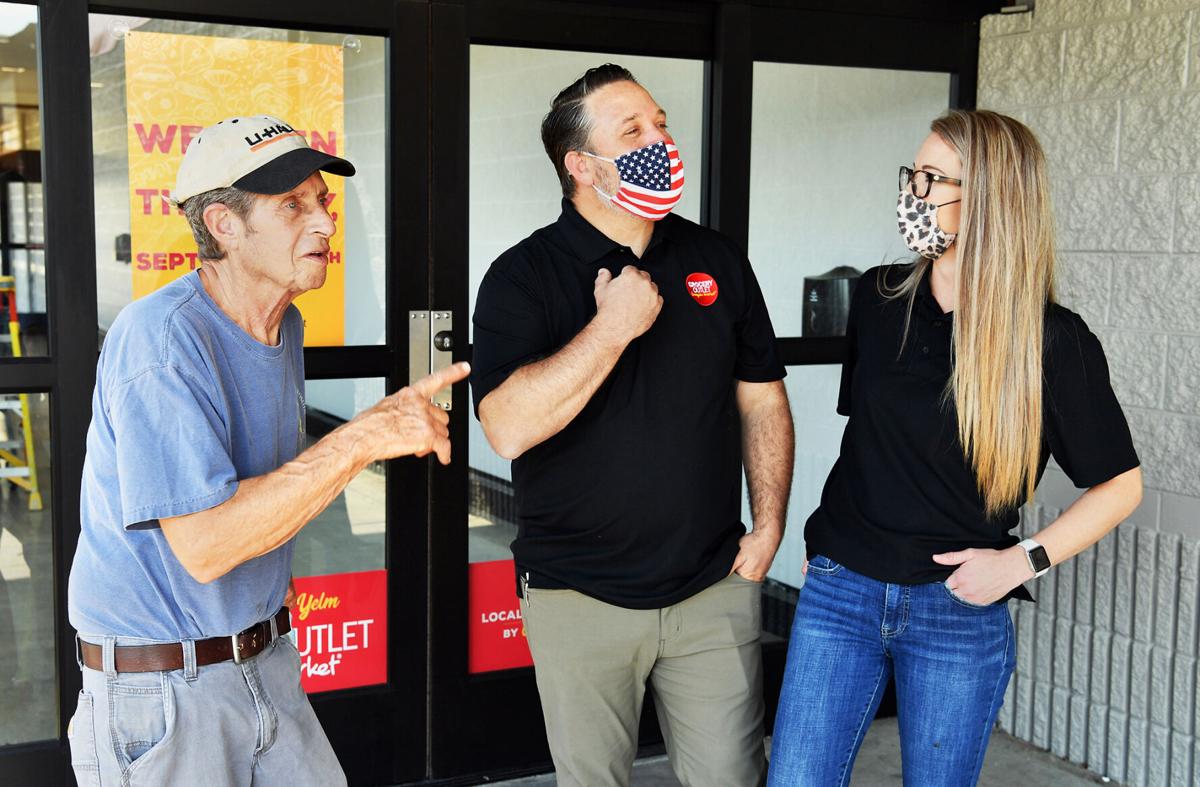 Longtime Yelm resident Larry Feldman, 79, left, hopes to be the first person to enter the Grocery Outlet in Yelm that will open on Sept. 17. To Feldman's right are Greg Vinyard, 47, and his wife Stefanie Vinyard, 34, who co-own the new store. They're seen here on Wednesday, Sept. 9. 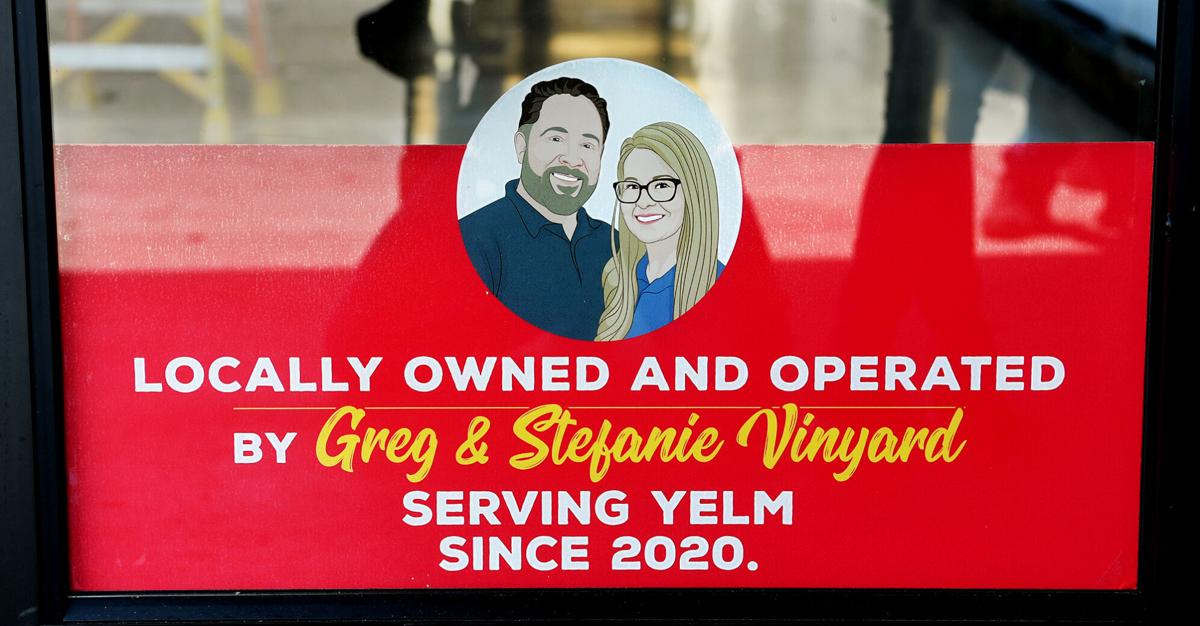 Greg Vinyard, 47, and his wife Stefanie Vinyard, 34, co-own the soon-to-open Grocery Outlet in Yelm. Their avatar images grace the entry door to their new store.

Before moving from sunny California, it was difficult for Greg and Stefanie Vinyard to point out Yelm on a map.

But now, after deciding to leave their home state for greener pastures, the couple and their four children now call the Pride of the Prairie their new home.

The couple and their 35 employees will be hosting the opening of their new store in the old Yelm Sunbird Shopping Center building on Thursday, Sept. 17.

“We’re just super excited to be a part of the community,” said Greg Vinyard, co-owner.

The couple has lived in Yelm for about six or seven weeks as they work on the finishing touches to their new store. The Vinyards join the ranks of two other families that operate Grocery Outlets in Thurston County.

Greg Vinyard got into the market retailing game as an ambitious 16 year old working for a Stater Bros. Markets. He would ultimately work for the supermarket company for more than 30 years, having operated his own store for 21 of those, he said.

Stefanie and Greg met through some friends and eventually got engaged. After having six kids, the family decided they needed a change of scenery after living in Lake Elsinore and Corona, both cities located just an hour’s drive from Los Angeles.

“We knew coming into this that we wanted to raise our family in a smaller community where we could actually belong to the community, help out, be part of the community,” Greg Vinyard said. “And when this location came up, we kind of jumped on it.”

Looking into Yelm and the surrounding area, Stefanie and Greg said it checked off a lot of boxes for the family. The family had previously visited the Evergreen State in July 2019 while on vacation.

“Instantly fell in love with it,” Greg Vinyard said.

“I’d visited family as a child, visited my aunt who lived up here. My grandma, at one time, lived up here,” Stefanie Vinyard said. “So I had been to Washington, he had never. When we came up here, on our drive in, we were both kind of like, ‘Wait, I think we both want to live here. This is what we want to do.’”

Even their kids were on board.

The family then moved from Lake Elsinore to Vancouver, Washington, for a nine-month training before making the move to Yelm.

“We sold almost everything we had,” Greg said. “It’s almost like one of those fairytale books. We loaded up everything we possibly could in the U-Haul and just went for it.”

Speaking of U-Haul, as the couple was discussing their experience moving to Yelm, Larry Feldman, operator of the U-Haul Neighborhood Dealer and Yelm Storage off Bald Hill Road, strutted his way up to the storefront on a recent day.

“You guys open?” he asked Greg and Stefanie.

Unfortunately not, they responded.

Feldman, 79, was actually one of the first people Greg met when the family moved to Yelm as he returned his truck to Feldman’s facility.

“Everytime I come by, I stop by looking to see if people are coming in,” Feldman said enthusiastically. “We all miss Sunbird, but we’re always open for a good food store.”

“You shop Grocery Outlet first, and you save some money,” Stefanie Vinyard replied. “It’s like a treasure hunt.”

After opening, the Yelm Grocery Outlet will be open 8 a.m. to 9 p.m. daily. The Vinyards say they’re inviting everyone to come check out their deals when they open. More information will be posted on the store’s Facebook page, “Yelm Grocery Outlet.”