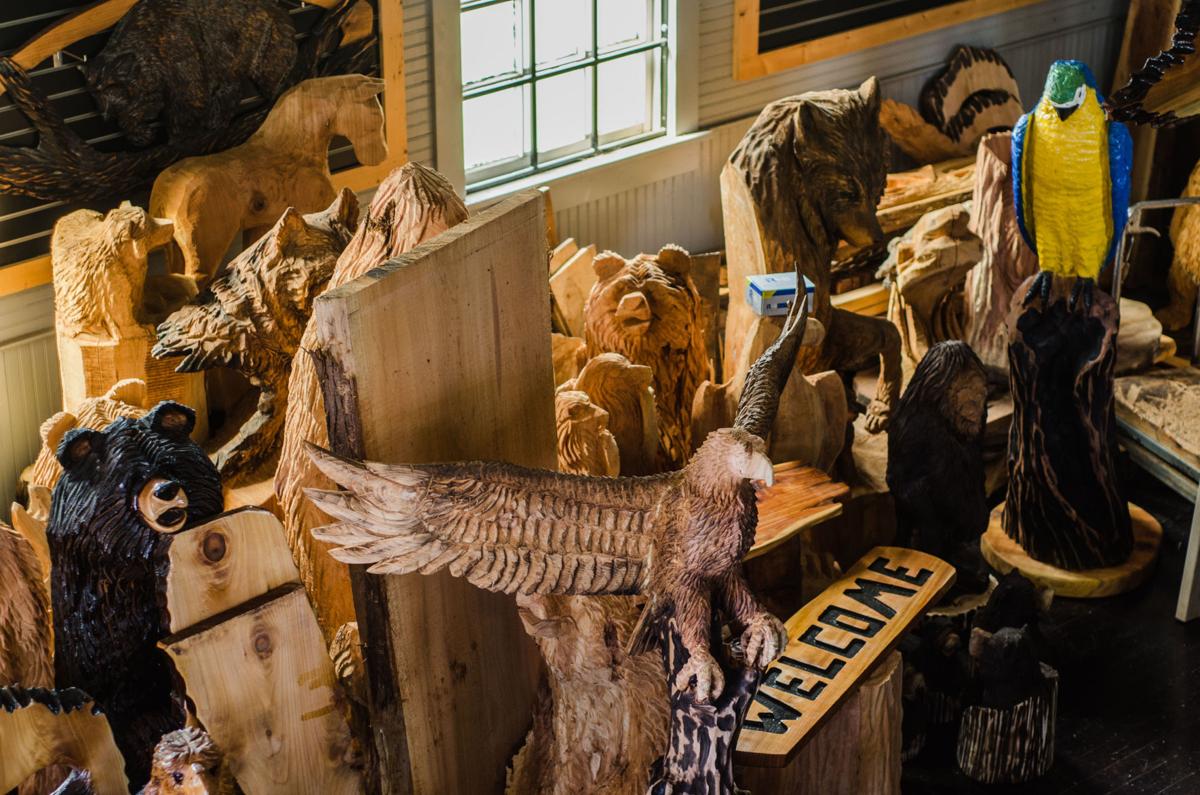 No one piece is quite like the other. In Donald Benson’s shop, dozens of artisinally-crafted wooden critters sit in various stages of completion. The shop holds pieces from six different artists. 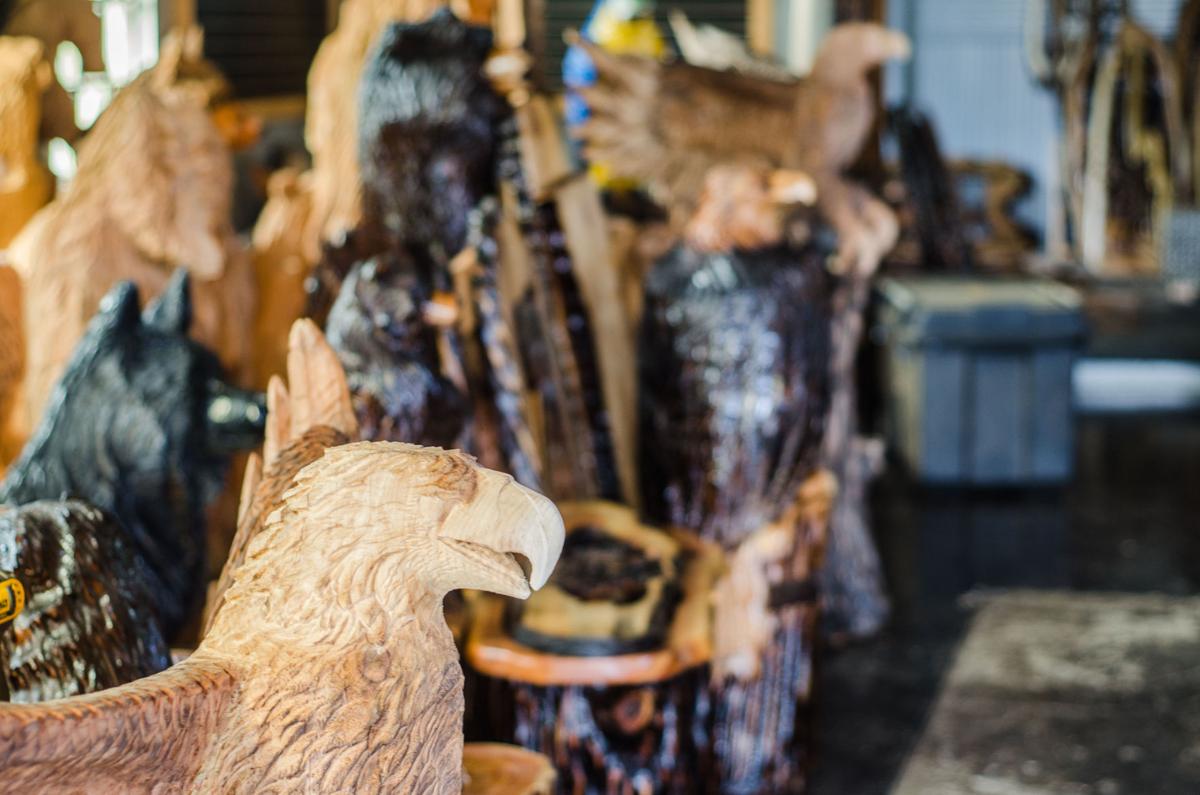 One of Donald Benson’s pieces, a large four-foot bust of a bald eagle, sits in his shop awaiting staining. 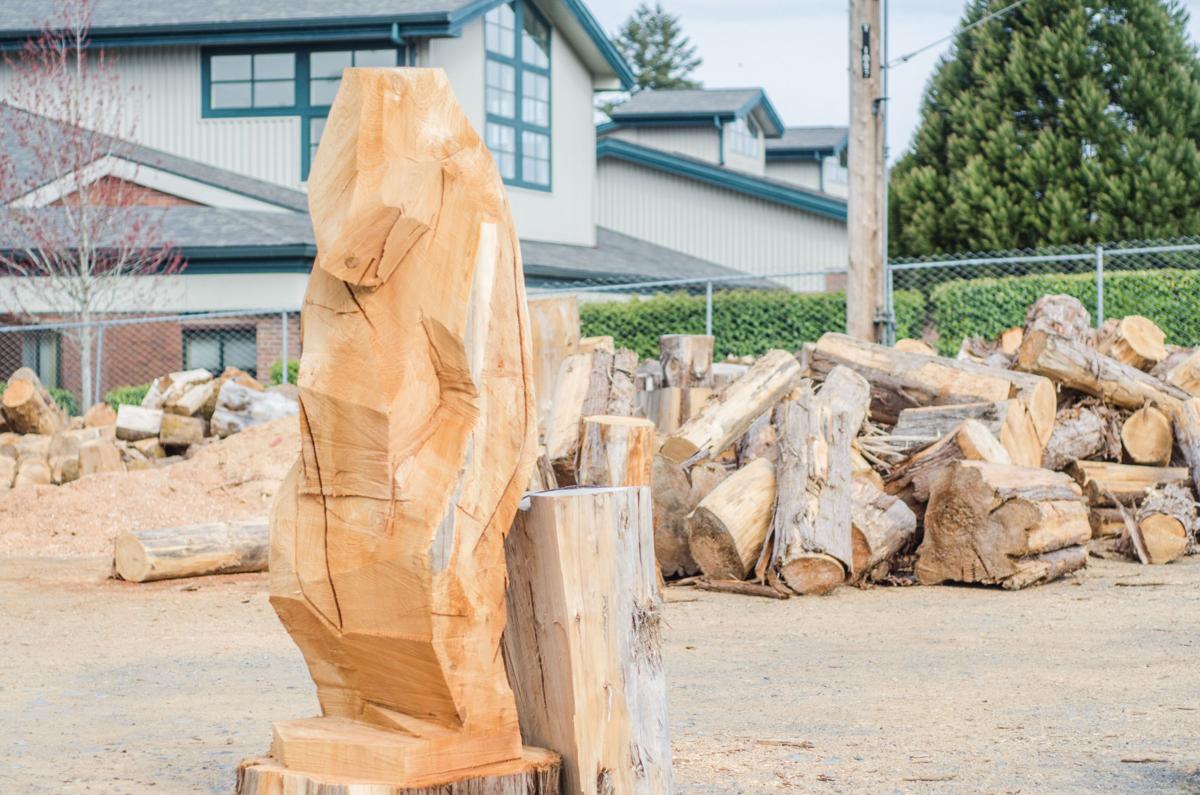 A large, seven-foot sasquatch bust stands tall on the side of Spanaway McKenna Highway at Donald Benson’s woodshop.

No one piece is quite like the other. In Donald Benson’s shop, dozens of artisinally-crafted wooden critters sit in various stages of completion. The shop holds pieces from six different artists.

One of Donald Benson’s pieces, a large four-foot bust of a bald eagle, sits in his shop awaiting staining.

A large, seven-foot sasquatch bust stands tall on the side of Spanaway McKenna Highway at Donald Benson’s woodshop.

Large pillars of sectioned cedar stand tall, towering over a large bed of wood chips and dust. Sitting in the cab of his pickup truck, Donald Benson gets ready to take off from the small church building he leases next to McKenna Elementary to deliver some of his pieces.

Benson is a wood carver and the business owner of Urban Wildlife Chainsaw Art. And you’ve probably seen him around. Most days, Benson works outside carving away at huge chunks of wood with a chainsaw. Slowly, the shapes and angles of bears, bald eagles, and sasquatches come into focus.

Inside the early-twentieth century church, rows of stained and unstained pieces line the walls. Sunlight breaks the murky windows and stained glass, reflecting the warm colors of the dozens of pieces carved by about six artists. Stained, fish-shaped plaques line the walls.

The room is crowded. And for good reason — it’s a shop mostly used for storage, staining and touching up pieces.

There, he lines up his pieces on the side of Spanaway McKenna Highway. Cars stop by and inquire about the delicate wooden fixtures.

“In this business, you can’t carve what you want,” Benson said. “There are one or two guys who probably have that clave… very few chainsaw carvers reach that.”

Benson, a full-time chainsaw carver of over 12 years, said most of his time is spent working on what he calls “production work,” fixtures of wildlife that tend to be the most popular for buyers.

A typical two-foot piece can take Benson about 16 minutes if he’s fast, he said. Other pieces might take a couple hours, from start to finish, and pieces tend to sell anywhere from $200 up into the mid $3,000.

But the carving aspect only makes up about a quarter of what he puts into it, he said. Transporting, purchasing tools, repairing tools and moving the pieces all take time and costs money.

“The carving side of my business is the tip of the iceberg,” Benson said. “There’s so much more to do besides carving.”

The Olympia-native began his wood carving career after he met his wife. His father-in-law, an 80-year-old chisel carver living in Japan, inspired Benson with his intricate carvings of flowers and japanese culture.

A number of years later, in 2008, Benson set up shop with a couple of other carvers at the gravel parking lot next to McKenna Elementary, after working a couple years at his craft. Soon after, he started wood carving full time and, in 2009, he found himself back at his house carving. This was right after the Great Recession.

“That was horrible because I went full time as we were tanking,” he said.

In 2011, Benson said he began competing at wood carving and lumber shows around the western United States. He toured as far east as Colorado, going up against some of the best wood carvers in not only the country, but the world.

Later that year, he won the semi-professional division at a competition in Reedsport, Oregon. Benson said it’s been hard to keep up with the competitive nature of professional wood carving, especially when the wood can be so unforgiving. Compared to his competition, he said he’s felt fairly unorganized when it comes to approaching a piece.

“You never know what the wood’s gonna present to you,” Benson said. “Some people go and they have everything down.” Benson said a majority of his touring occurred between 2011 and 2015.

Since he’s started carving, Benson said he’s completed thousands of chainsaw-carved pieces. At least 5,000 of those have been of a small two-foot bear, which he said is very popular.

“And that was the first thing I learned how to do, ya know,” he said. “And the public wants them.”

Over the years, Benson said he’s seen the broadening of the artform, including more diverse spectacles of wildlife and the different shapes and uses they can take. That includes benches, tables and robustly-stained plaques.

“I get bored with the plaques pretty easily,” he said. “Maybe because it’s a lot of sanding.”