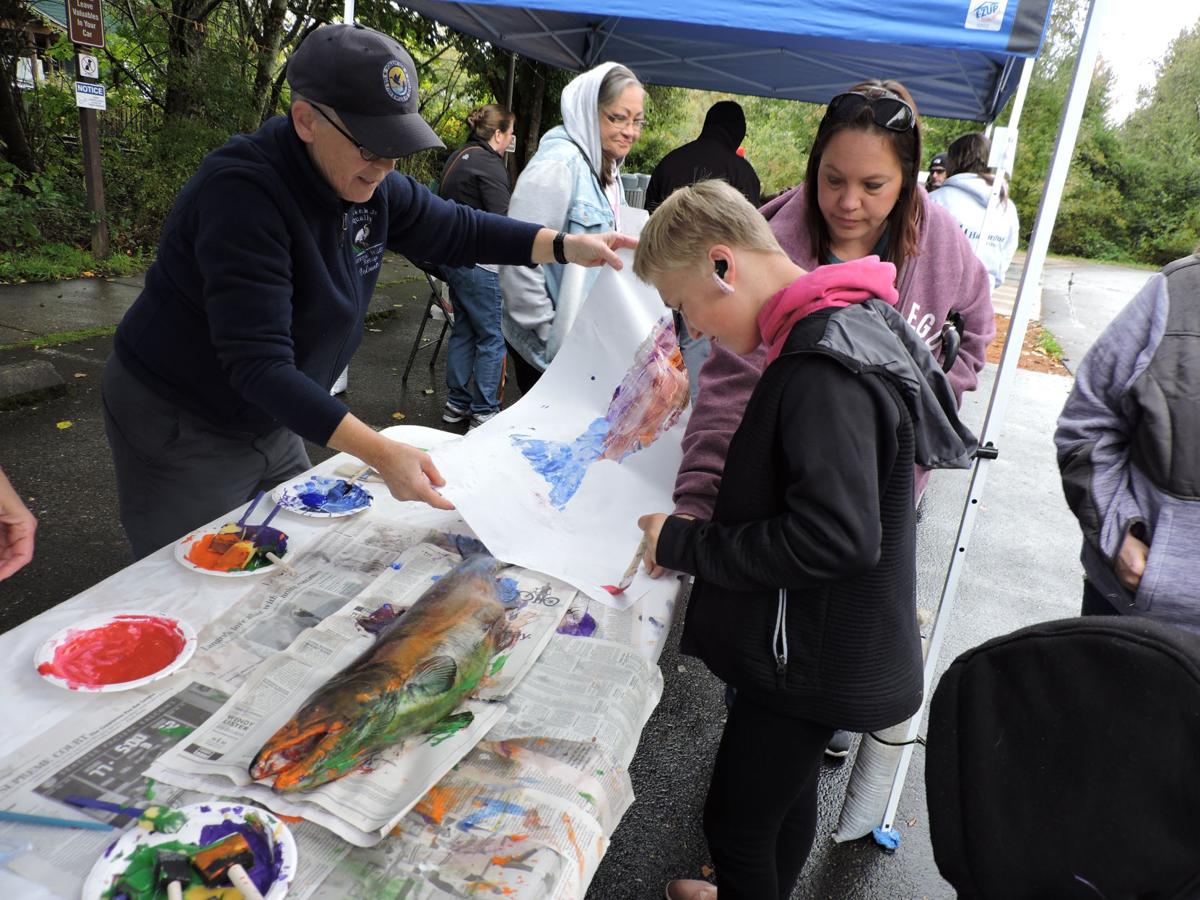 Salmon printing from a real (but dead) salmon was one of the activities at the Nisqually Watershed Festival.

Prints from painted dead salmon are seen drying at the Nisqually Watershed Festival. 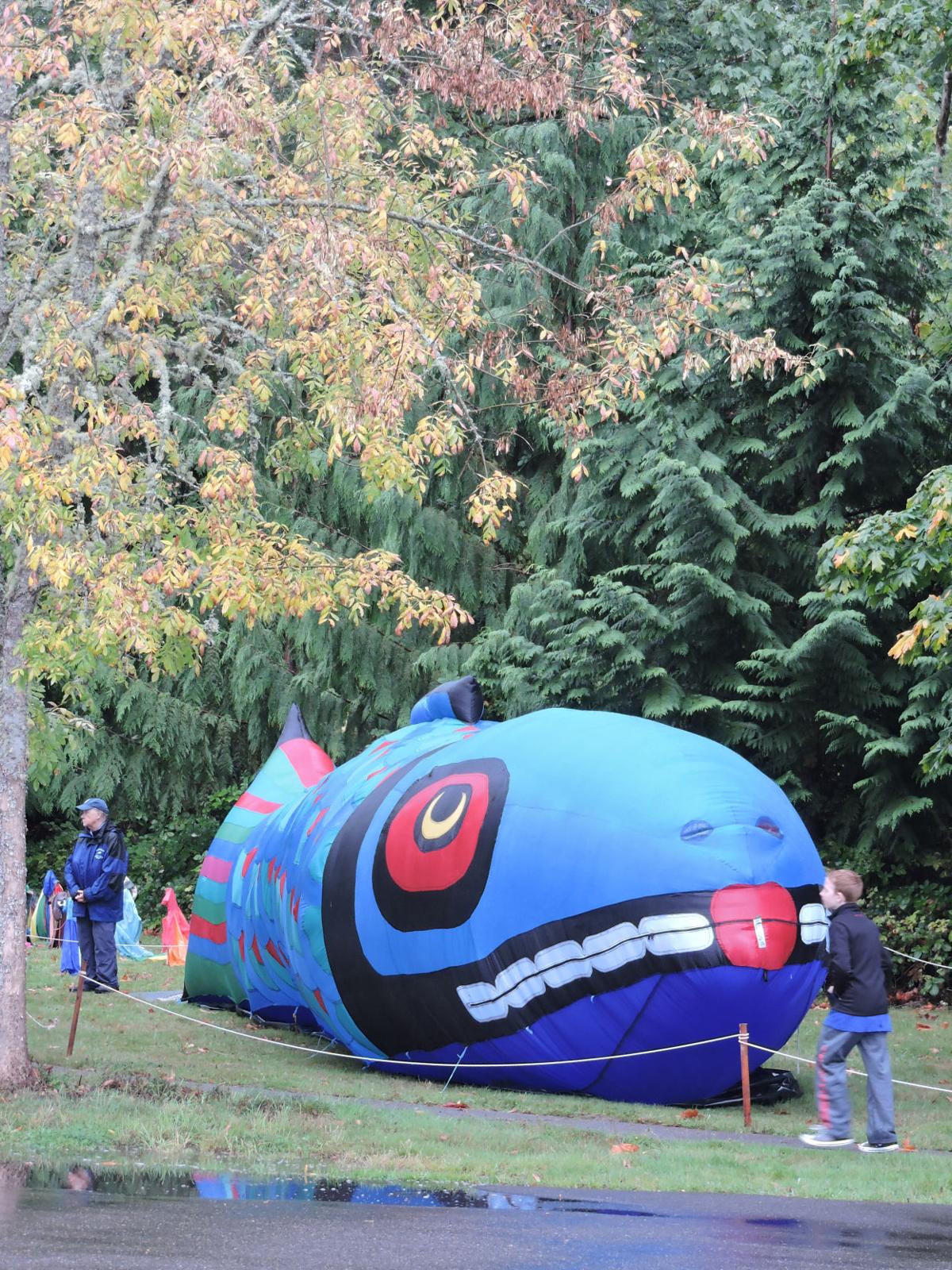 There was was an inflatable salmon at the Nisqually Watershed Festival for children to climb on. 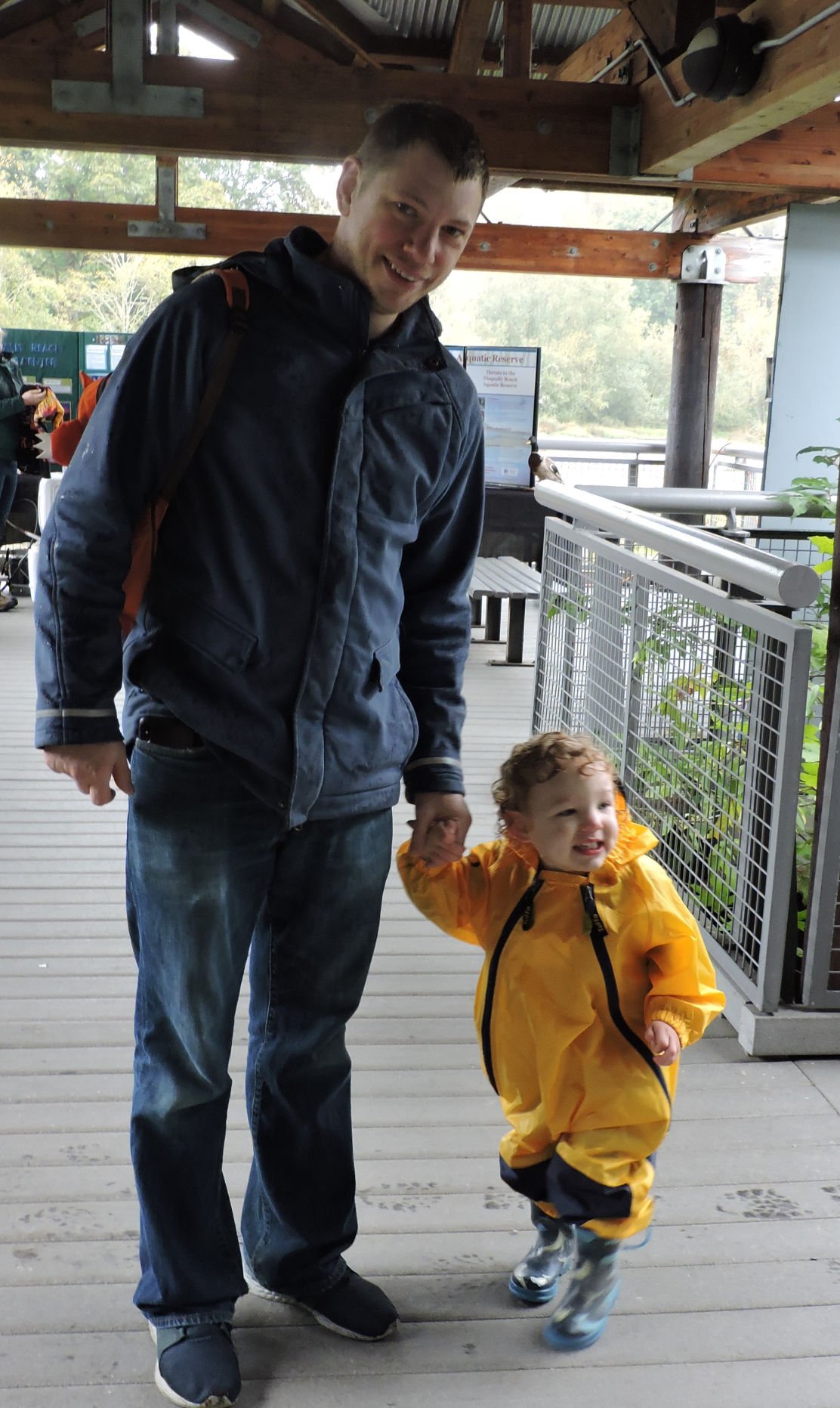 Oren Woodbridge, 2, and his father Andrew Woodbridge brave the rain Saturday at the Nisqually Watershed Festival. They are from Lacey. "I'm having fun," Oren said. 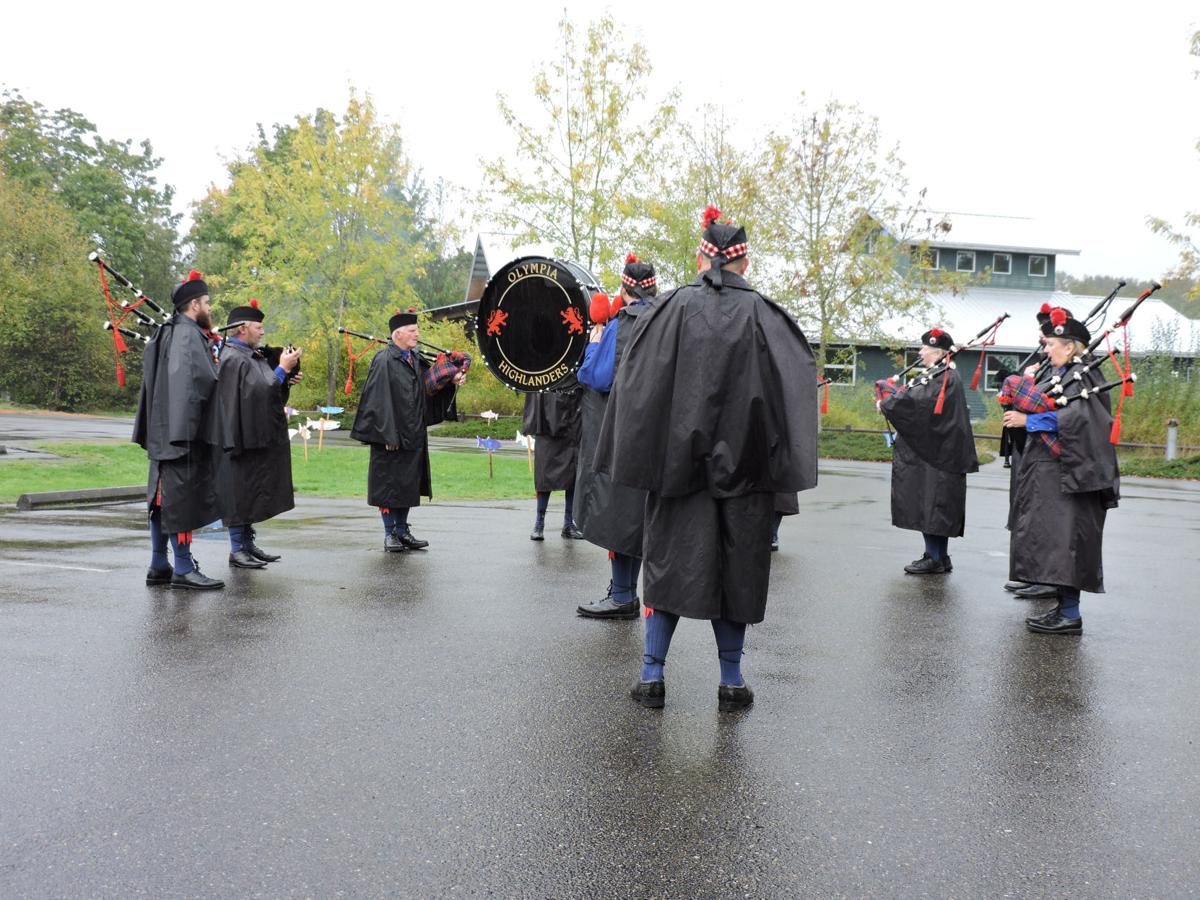 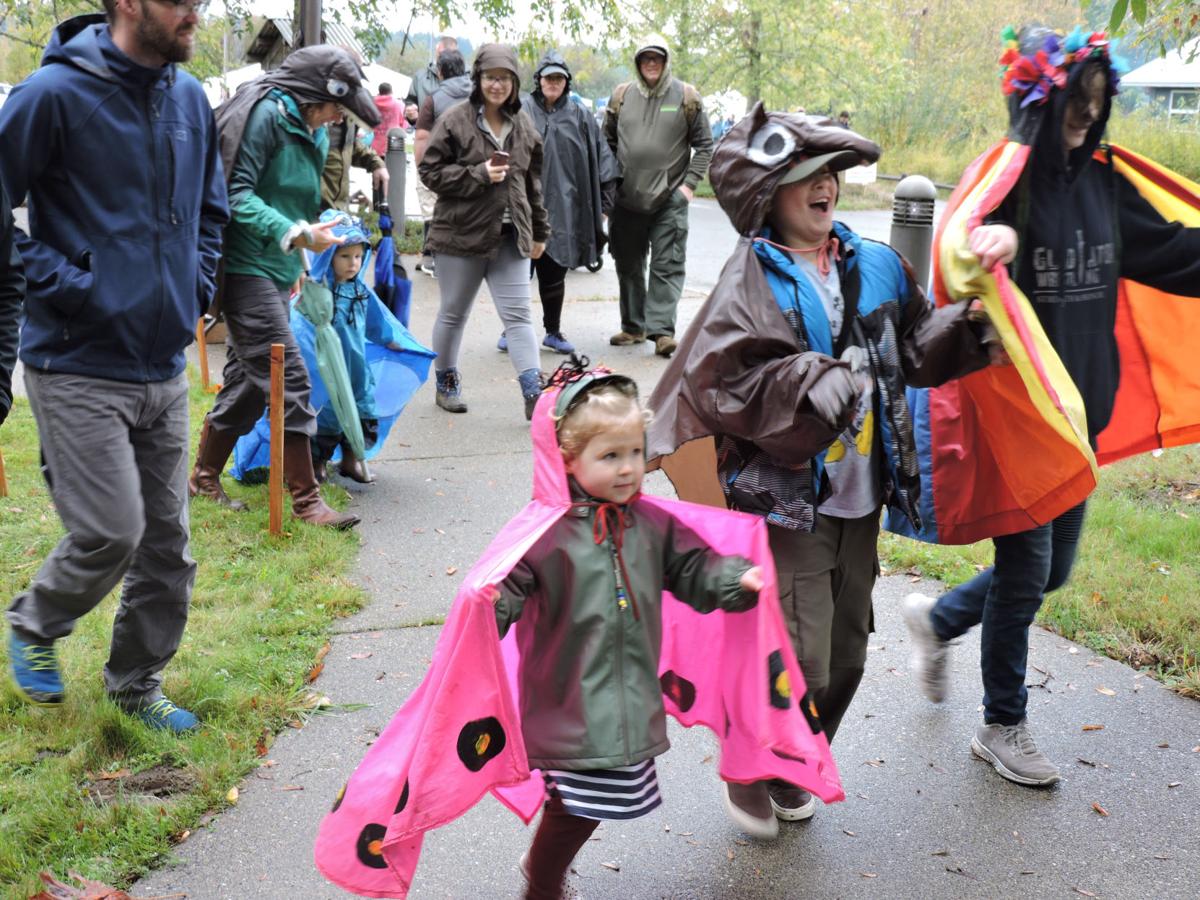 Critter Parades were held every hour at the Nisqually Watershed Festival. Adults and children could put on costumes that were provided. They were encouraged to be as loud as they wanted. 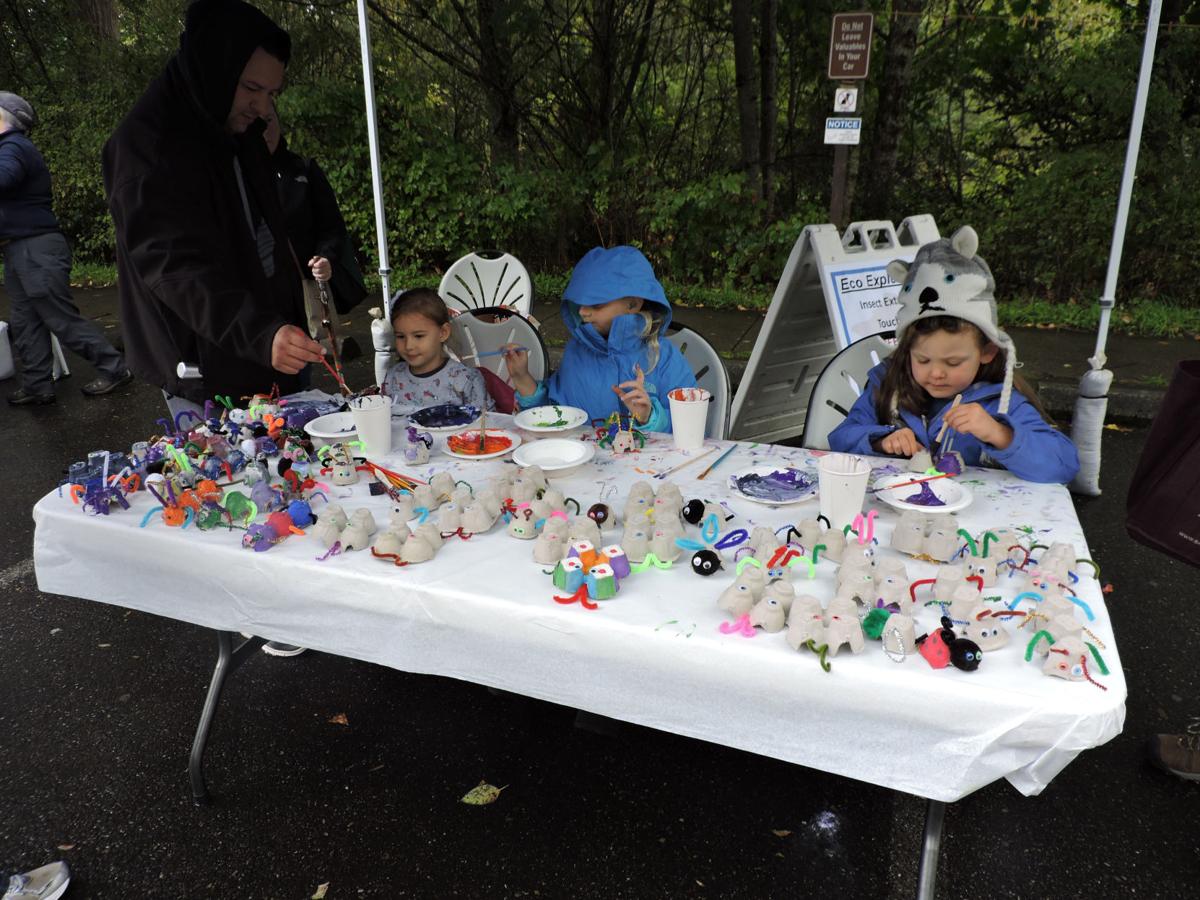 There was an art booth for kids to make caterpillars out of egg cartons at the Nisqually Watershed Festival. 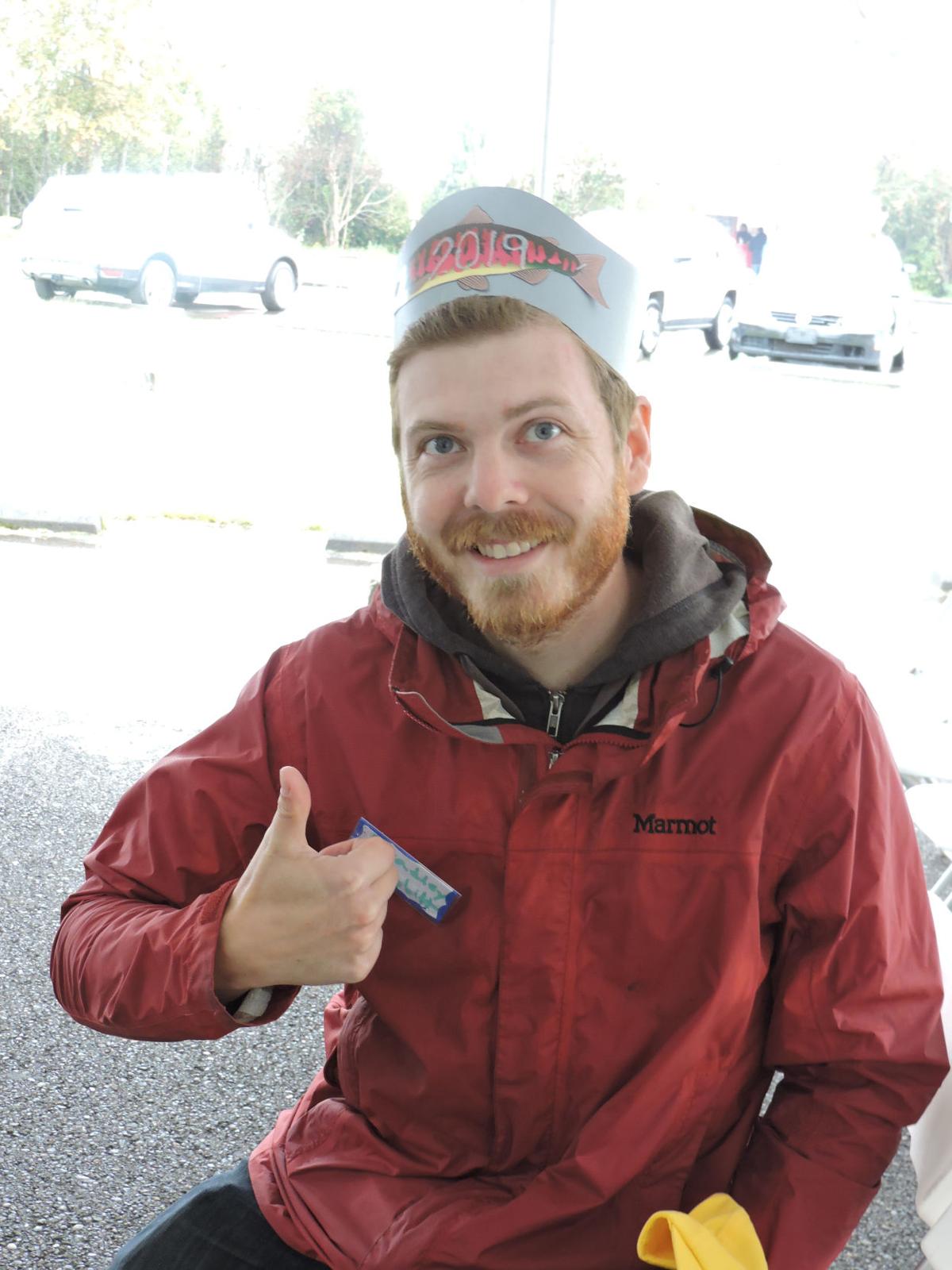 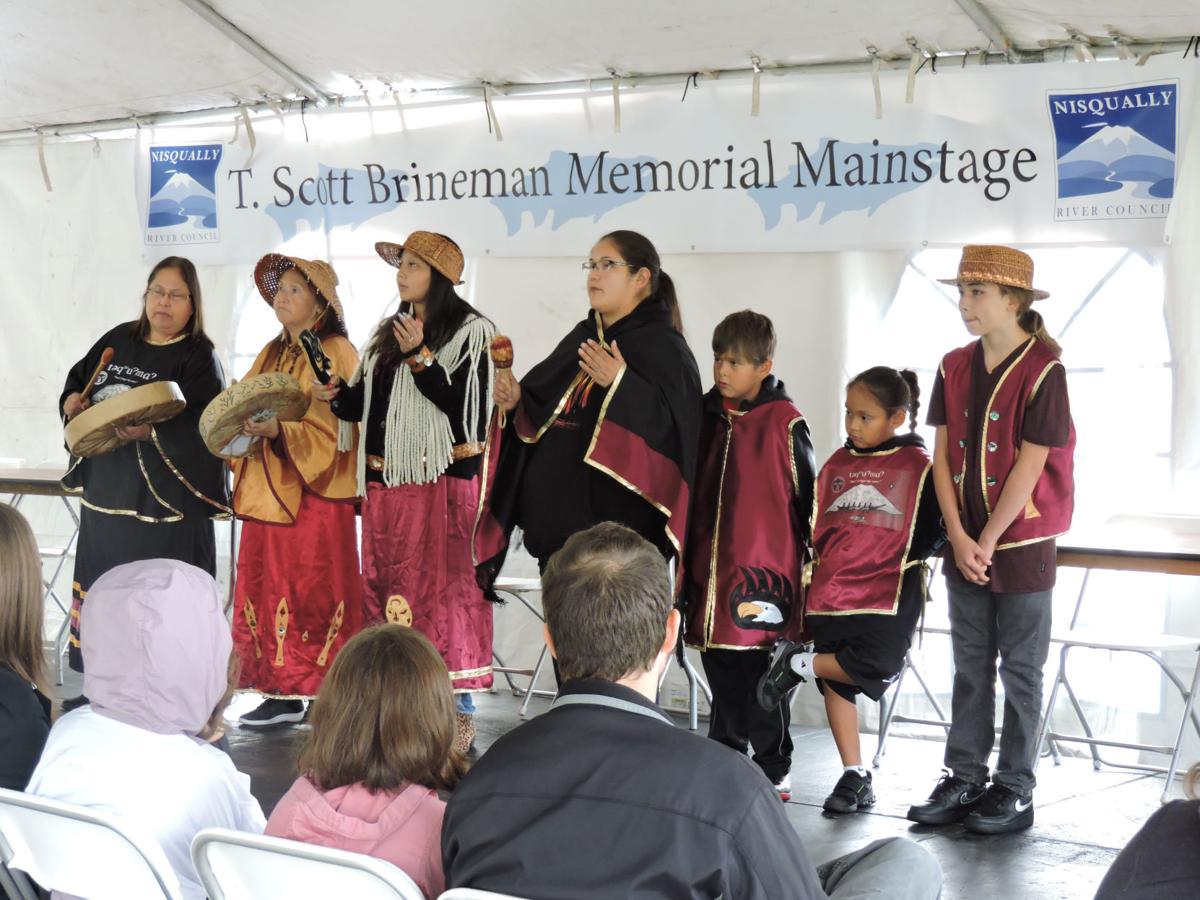 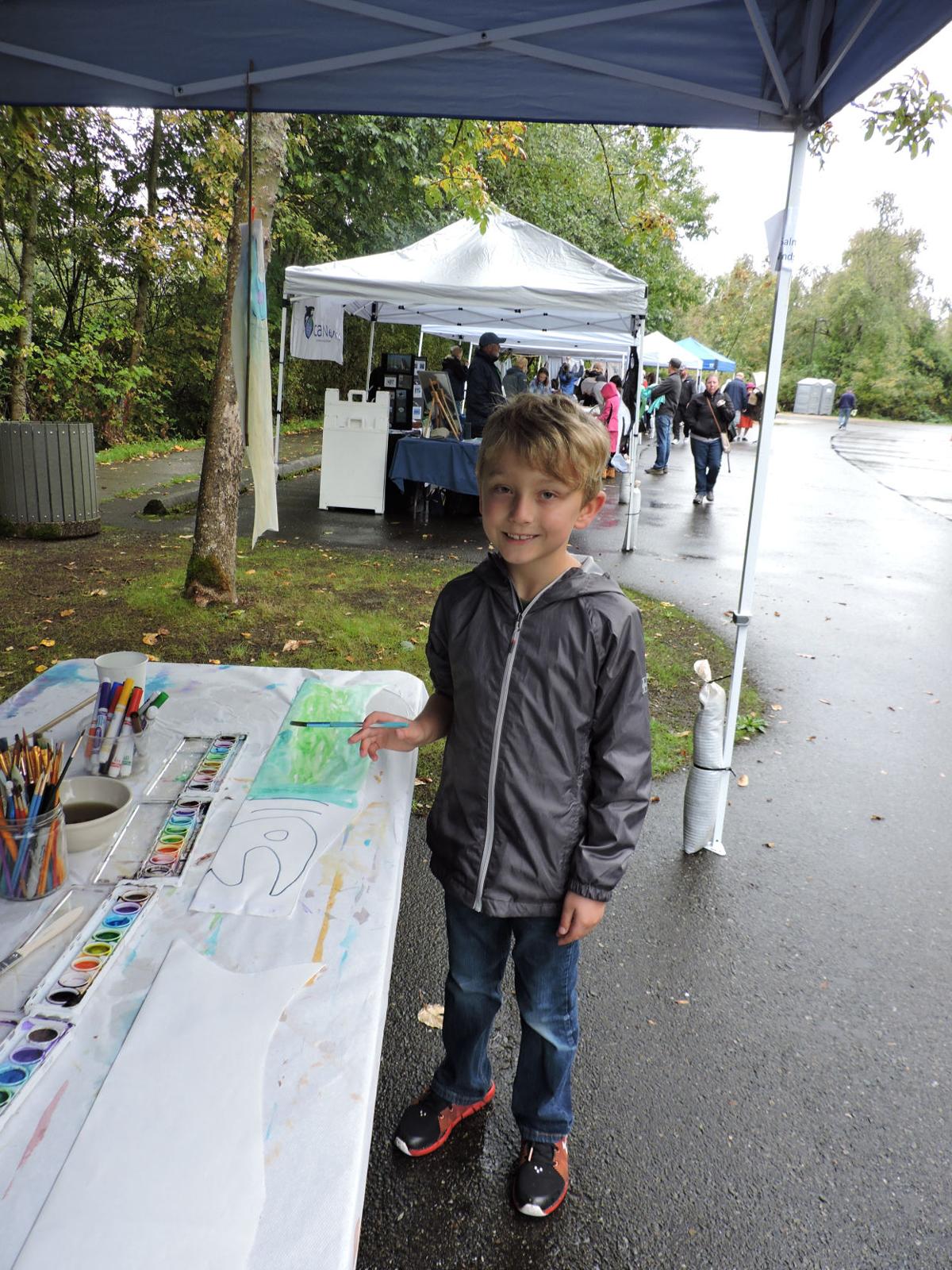 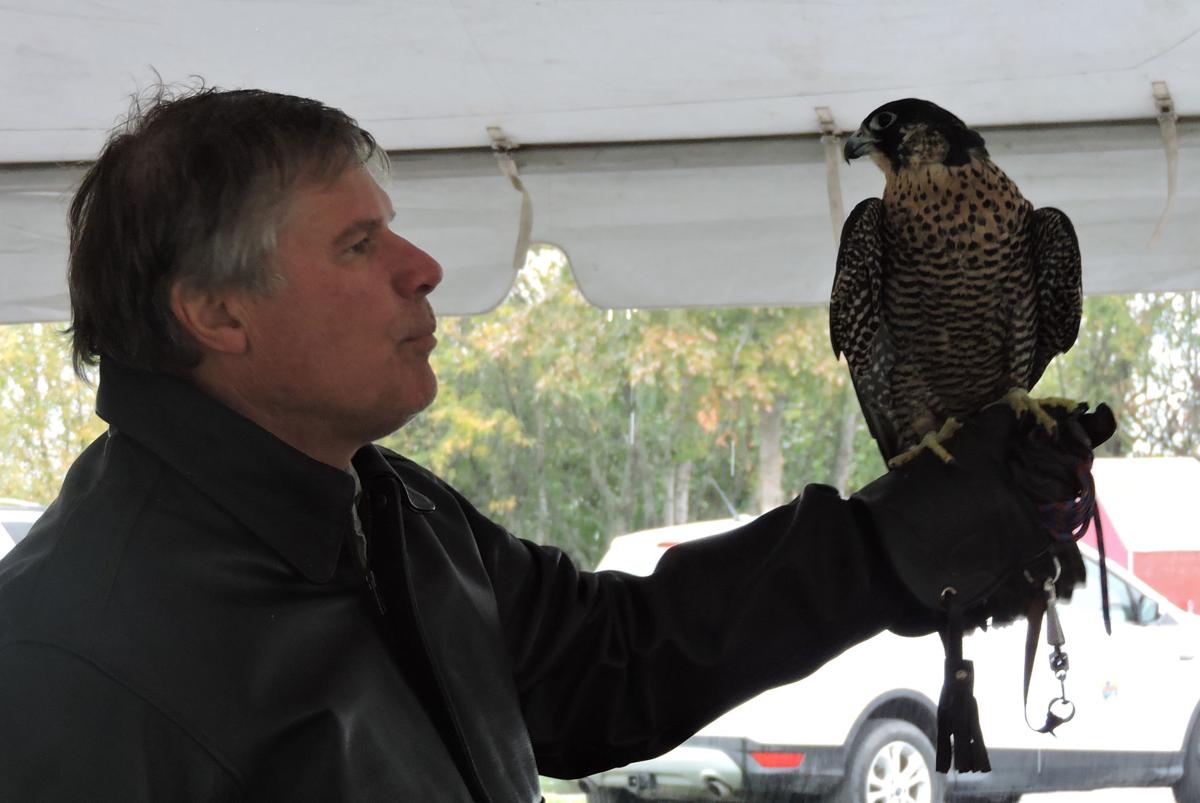 Brad Wood, a falconer, with Grande, a female Peregrine falcon. 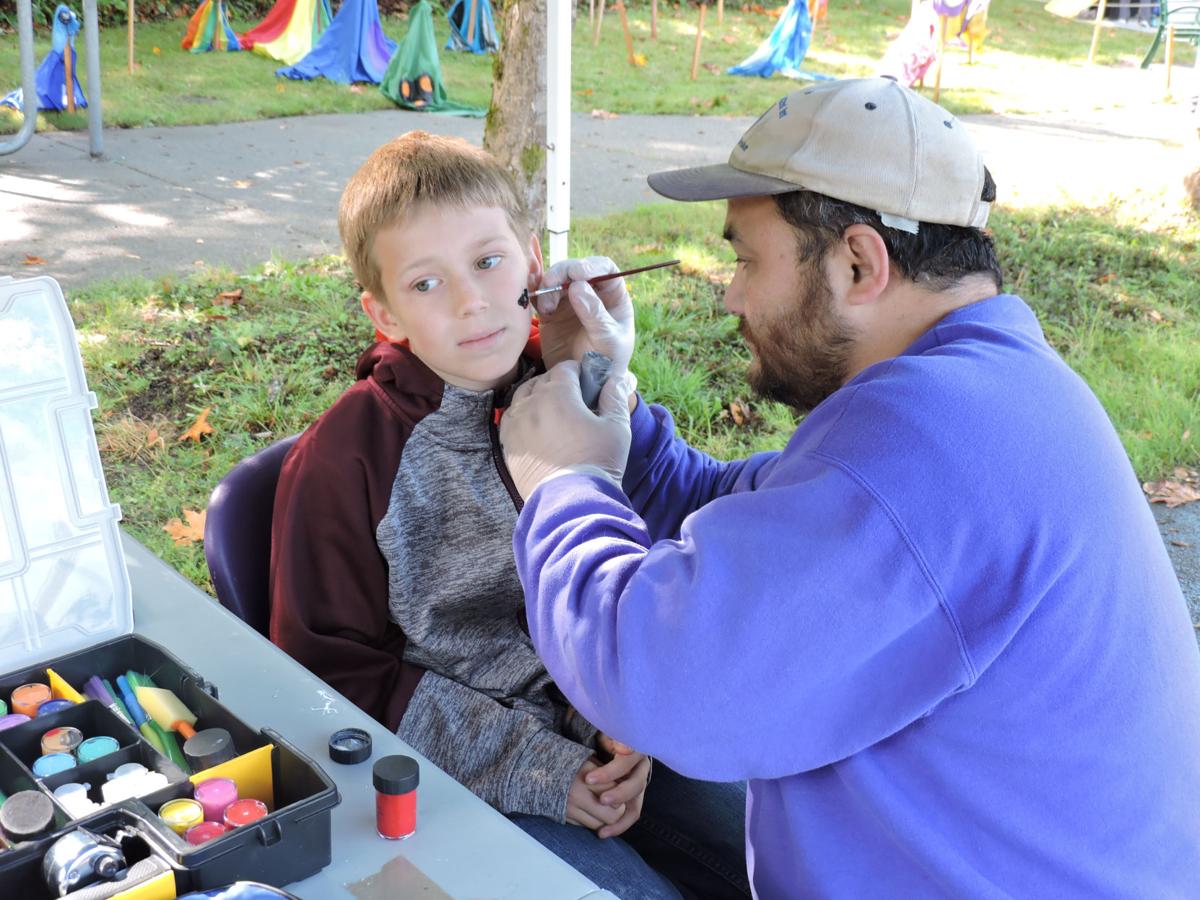 Jaxyn Reambottom, 11, from Yelm, getting his face painted by Marty Ikari from Lacey Sunrise Lions at the Nisqually Watershed Festival. 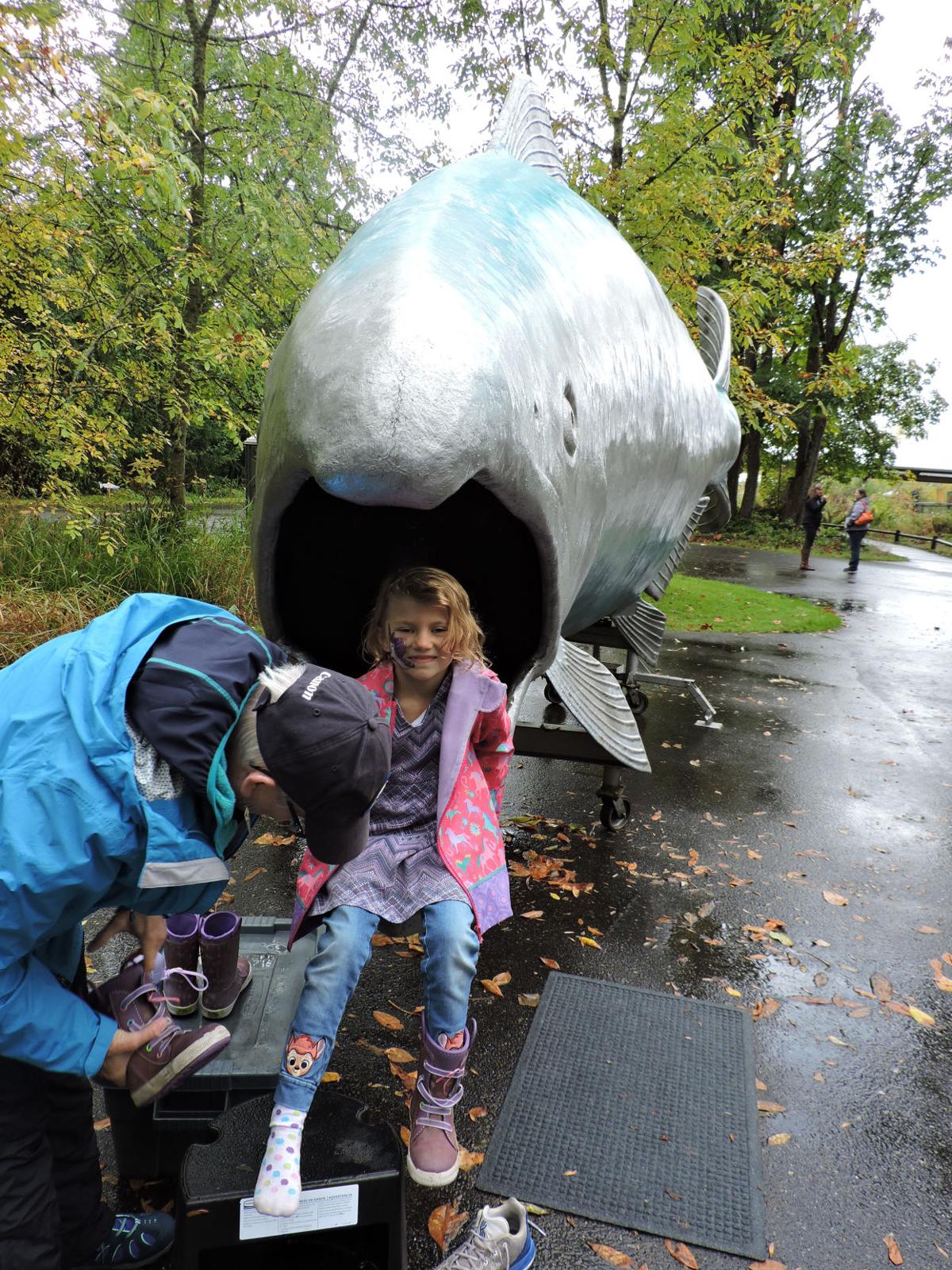 A young attendee of the Nisqually Watershed Festival poses next to a huge salmon. 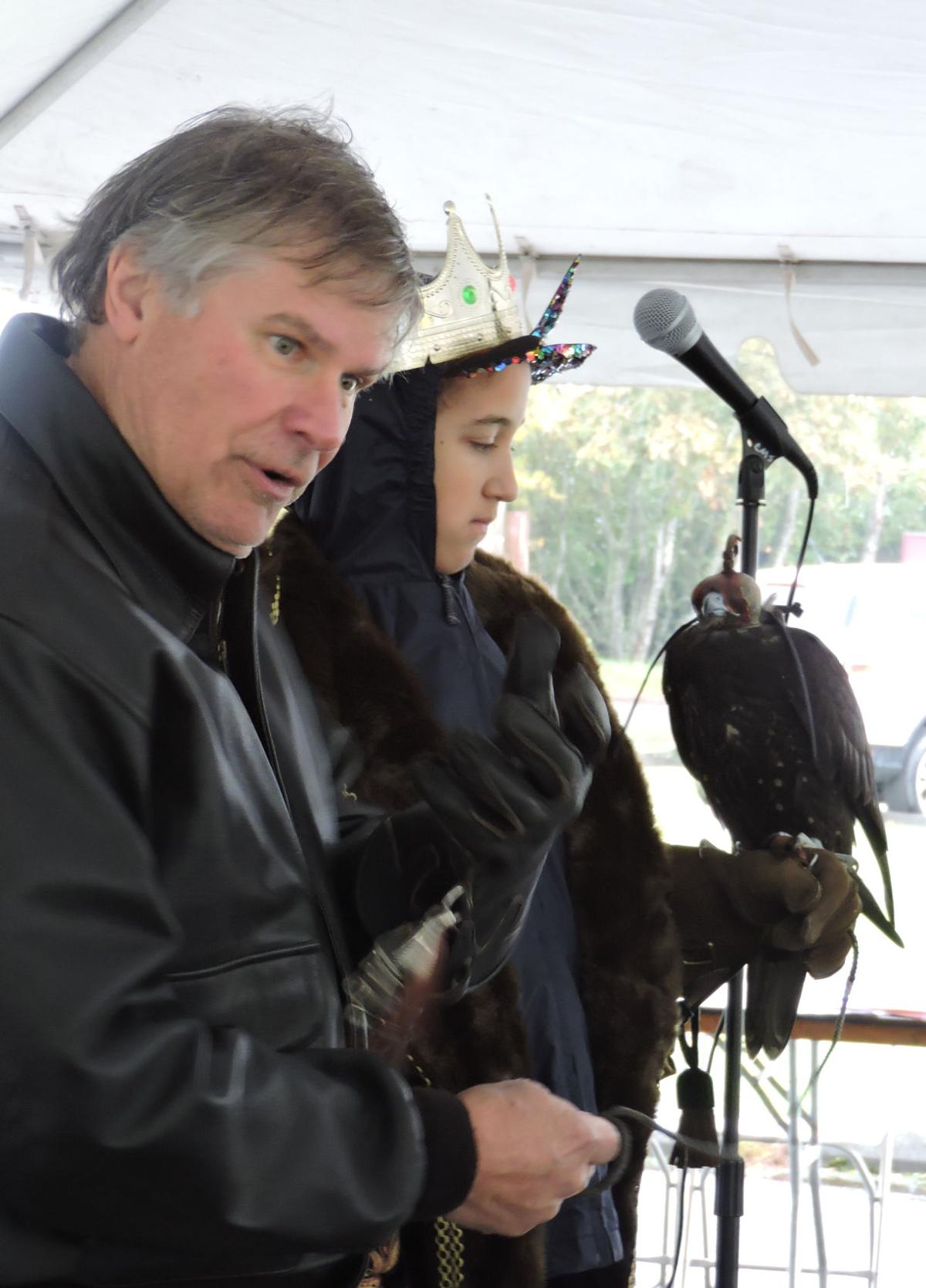 Brad Wood and an audience volunteer dressed as a Queen show a falcon at the Nisqually Watershed Festival. 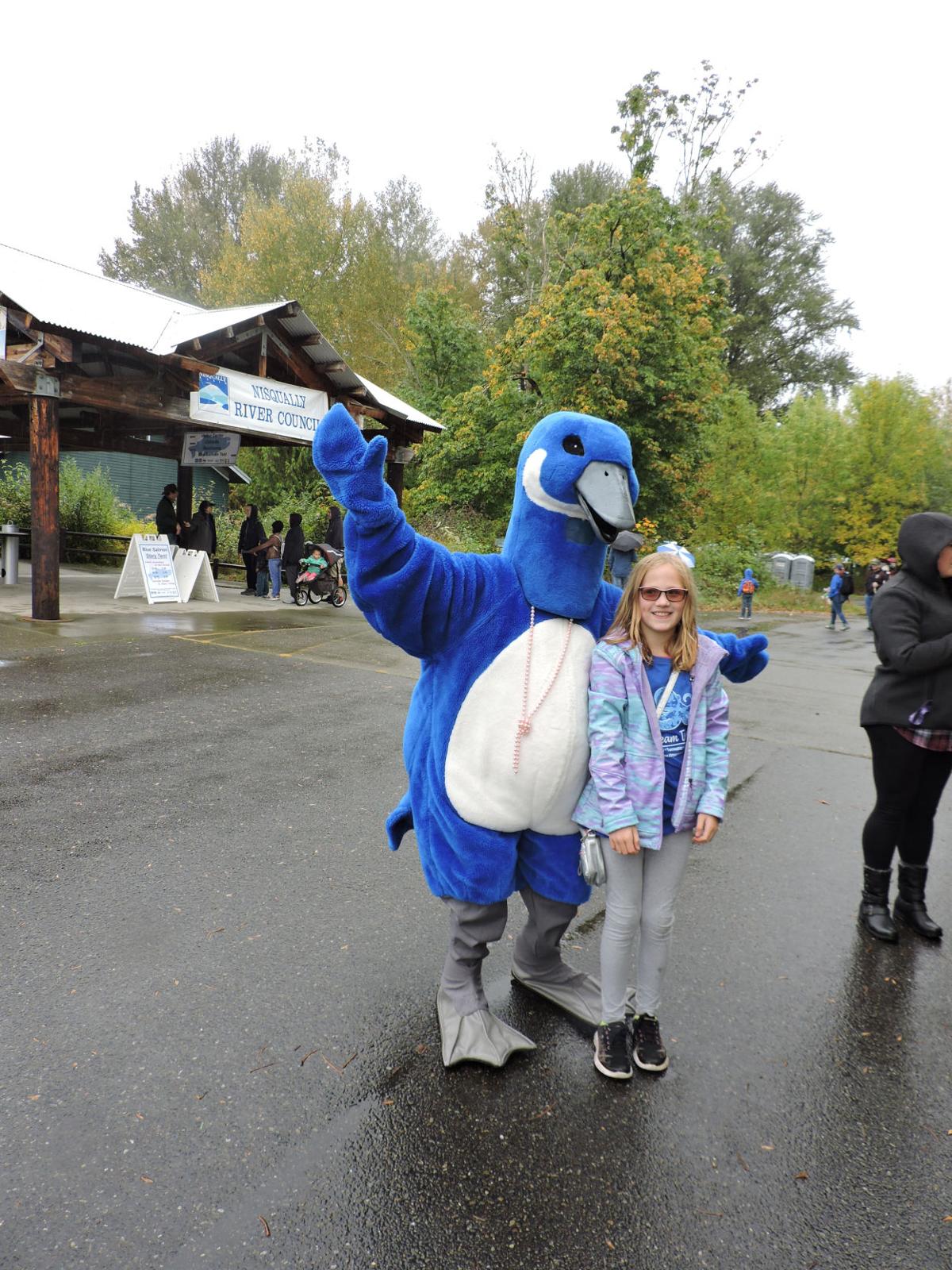 Pearls symbolize 30 years, and that’s how long the Nisqually Watershed Festival has been celebrated.

The festival was a multicultural celebration of the history, economy and environment of the Nisqually Watershed, from Mount Rainier, to the Nisqually River to Puget Sound.

Enthusiastic volunteers such as Terry Hodge rode on the bus with visitors and gave a small talk about the festival and the refuge.

“I’ve been a volunteer for nine years now,” she said. “I help in the education center and love the school field trips.”

The best recommendation she can give?

“Come by at different times of the year,” she said. “The refuge changes so much each season.”

The Olympia Highlanders Bagpipe & Drum Corps started off the festival, performing a number of tunes in the morning rain. Eildon Scottish Highland Dance Academy students performed Pas de Basques on stage and danced along with a bagpiper. An older student performed a solo “Fling and Sword” dance, which was done in the past before a battle.

All day there were fun and educational things to do, see and learn, plus lots of food.

Some of the activities available to attendees were the opportunity to dissect a dogfish, see live marine critters, participate in storytelling, visit the Reach Nature Center, take a nature walk, learn about climate change’s effects on Mount Rainier, take an insect safari, learn about orcas and why our resident whales aren’t doing well, learn about wolves and pet a mink, bear and coyote pelt.

At the main stage, brand new “stream stewards” graduated. Not only did they receive certifications, they got crowns.

Bradley Bobbitt, of Olympia, took the 40-hour course this summer.

“We learned the history, the biology and about the natives of the Nisqually River,” he said. “I fish a lot and I knew how important the river is. I took the course to learn more. I especially liked the field trips.”

Immediately after the graduation ceremony, the new stream stewards went to work volunteering all over the festival.

Brad Wood brought two trained raptors and talked about his 50 years of being a falconer. He raises falcons on his property in Yelm. Some of the falcons are sold in the Middle East where people still hunt with raptors. The birds are a status symbol in the Middle East. Many of Wood’s birds are purchased by various organizations that release the raptors back into the wild.

“I was 15 years old when I got my first falcon,” Wood said. “Everywhere I went, I had a falcon. I went to college with the falcon. I got married and the falcon was there. I’ve been around the world because of the raptors.”

He explained “raptor” is a Latin word that means “to grasp or to catch.” In Europe during the Middle Ages, falconry was the domain of kings and queens.

“We focus on the Nisqually River and the ground around the river, but also important to the river is above the ground, in the air,” he said. “Raptors are indicators as to how well a habitat is doing.”

One of his birds is a female named Grande. She is a Peregrine falcon. They are the world’s fastest bird.

“A friend of mine skydived out of a plane. Behind him came his falcon. She dove faster than he could freefall” Wood said. “He clocked her at 225 miles per hour.”

The other raptor he brought was a male named Sooty. Sooty is a hybrid, half-Gyrfalcon and half-Peregrine. His birds wore leather hoods when on their perches. The hoods keep them calm. They also wear jesses, leather straps on their legs, which the falconer holds as the bird sits on his gloved hand. The jesses are removed the birds are flown.

“You have to take the jesses off them when you fly them. Do you know why?” he asked the crowd.

“Because Bald Eagles are pirates! They like to steal food. If they see my falcons with the leather straps hanging down, the eagles think my birds are carrying prey,” he said. “They go after my birds, expecting my birds to drop their prey. Of course, my birds can’t release their jesses, then eagles will kill my birds.”

The poster that helped promote this year’s festival was created by Charlotte Millar. She and other children who won a contest were recognized in a ceremony. Fourth-grader Millar was the overall winner and she is homeschooled. Thirteen schools, grades first through sixth, participated, and there were 245 entries.

Learn more about the Nisqually River Council by visiting nisquallyriver.org.