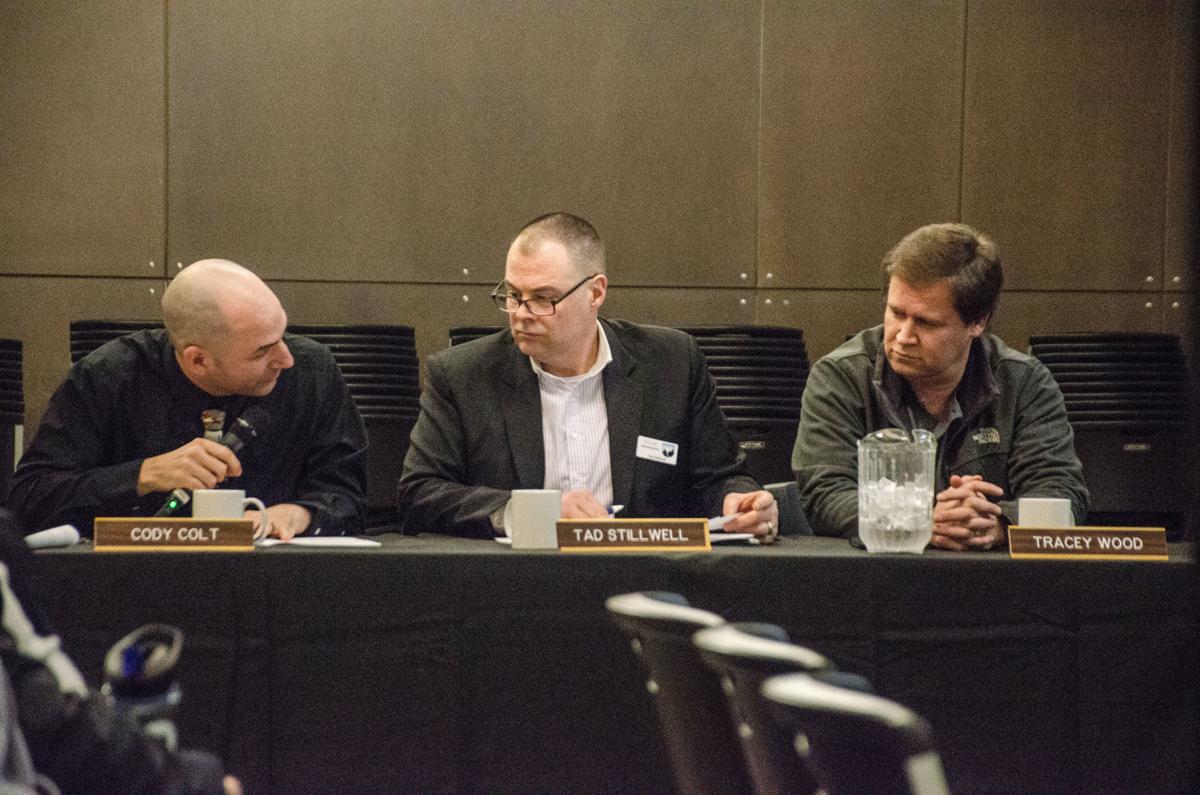 Yelm council member Cody Colt looks over at council members Tad Stillwell and Tracey Wood during a question and answer session between the council and homeless task force earlier this month. 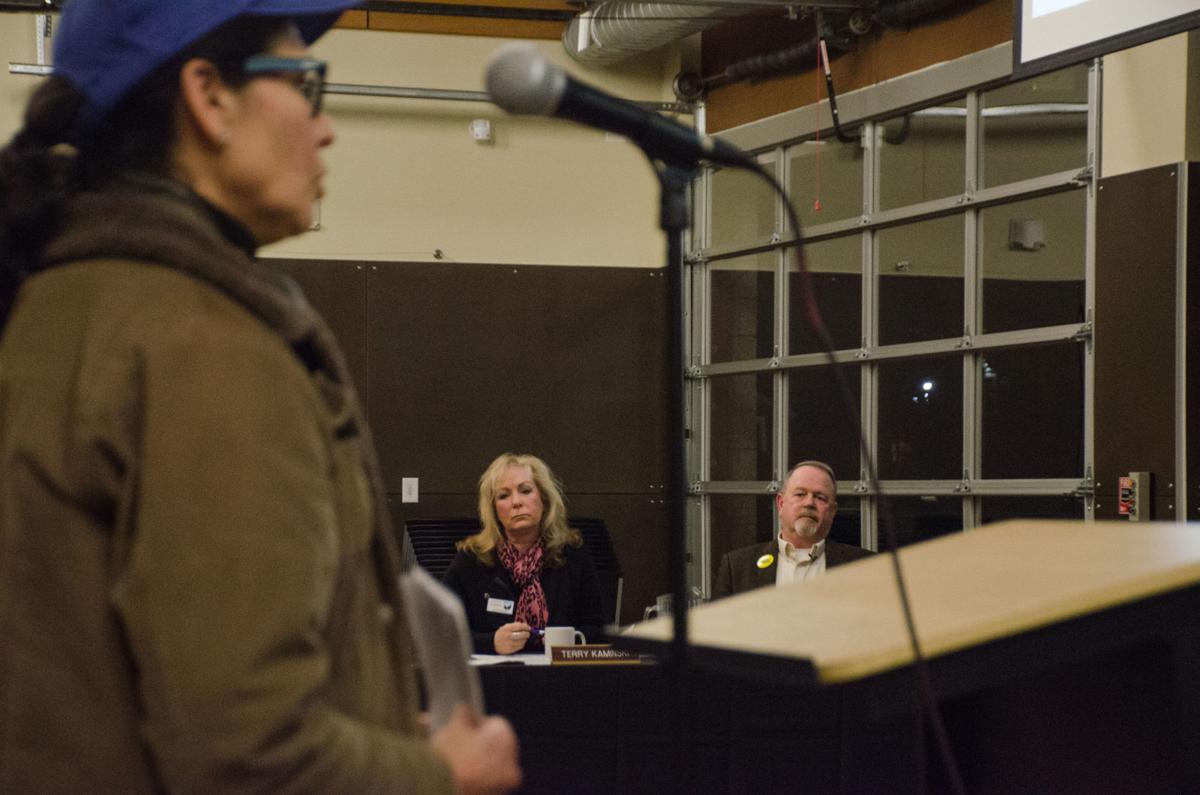 Councilmember Terry Kaminski and Mayor JW Foster look on as a community member during a Q&A session between the council, public and homeless task force. 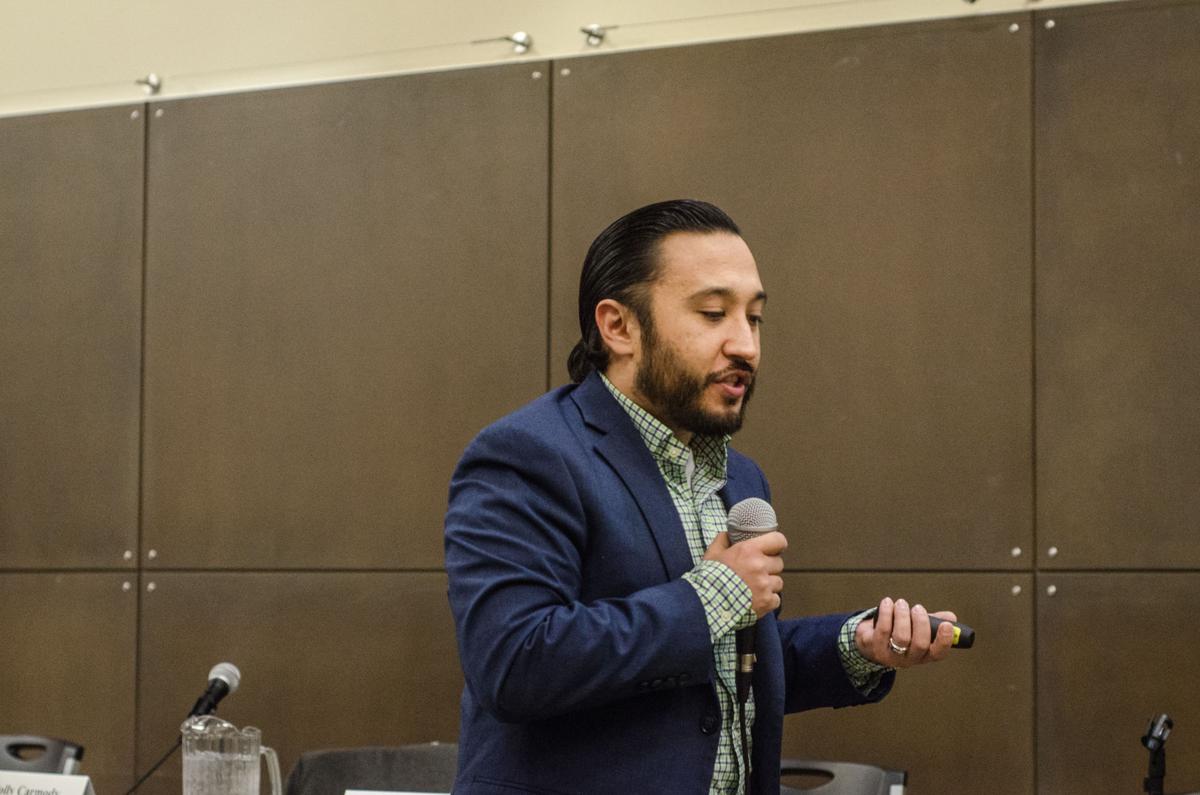 Councilmember Joe DePinto, a member of the city’s homeless task force, presents to the council their findings after being commissioned for a year. Many on the council were dissapointed that the task force brought back such broad recommendations without a cost breakdown of each.

Yelm council member Cody Colt looks over at council members Tad Stillwell and Tracey Wood during a question and answer session between the council and homeless task force earlier this month.

Councilmember Terry Kaminski and Mayor JW Foster look on as a community member during a Q&A session between the council, public and homeless task force.

Councilmember Joe DePinto, a member of the city’s homeless task force, presents to the council their findings after being commissioned for a year. Many on the council were dissapointed that the task force brought back such broad recommendations without a cost breakdown of each.

Some Yelm City Council members are not feeling confident in the suggestions made by the city’s Homelessness Task Force during a study session Tuesday night, with a lack of information on how much additional services would cost being the chief concern.

At a meeting that included about 10 members of the public, Councilor Cody Colt said he had hoped the task force would bring forward a cost analysis alongside each of its recommendations for further addressing homelessness in the city.

Last year, the Homelessness Task Force voted to move forward with seven recommendations. Among them were hosting a monthly low-income clinic at the community center, forming a permanent homeless commission, increasing law enforcement of the city’s regulations, reviewing Yelm code and ordinances, working with local nonprofits to coordinate efforts, opening up the community center during severe weather events and creating a public works jobs program.

These recommendations were developed by the task force amid widespread criticism during community comment periods. Many attendees of recent task force meetings said they did not want additional city funds going toward services for the homeless.

Following the task force’s presentation on Tuesday at the Yelm Community Center, councilors voiced admiration for the task force’s initiative to look at this problem, but were critical of what the group came back with.

Colt also said it was disappointing that the task force didn’t bring forward examples of ordinances similar to what they’re recommending that could have fast-tracked the process of drafting language.

The council is expected to vote on the group of recommendations at the next city council meeting on Tuesday, Feb. 11.

Mayor JW Foster said its likely the seven recommendations that have been put forth to the council will be voted down or deferred into committees to be refined.

Subsequent town halls with the community are expected.

According to the ordinance that formed the task force in 2018, members appointed to the ad hoc group weren’t required to provide an itemized cost breakdown in the report.

Foster said a cost breakdown of the recommendations should still have been an assumed responsibility by members doing the work.

Including that information would have helped city staff and council members weigh the return on investment and measure the impact from first glance, Foster said.

“I just thought there’d be a little more research done on your end… From my personal perspective, when I volunteer, even though I’m not getting paid to do it, I put my whole heart into it or I wouldn’t volunteer for it,” Colt said.

“I volunteer for a lot of things. I don’t do them half-assed. I do them,” he told the Nisqually Valley News.

Following the publication of this story online, Foster denounced his phrasing of the issue, saying that his words sparked division and were not reflective of how he truly felt about this situation.

“That was a poor choice of words for me to have said or for you to have printed,” he said.

Foster added that many of the ideas, while undeveloped, are worthy of further examination.

In response to Colt’s comment on the recommendations, DePinto, on behalf of the task force, said the parameters and resources given to them weren’t enough to flesh out as thorough report as he might have been expecting.

DePinto also agreed with Colt that he wouldn’t bring these recommendations forward to a vote by the council.

“We’re really not equipped to add any of these services, that’s just my take on it. It gets very expensive, very quick,” Councilor Tad Stillwell said. “And for being very fiscally responsible, as you say, I think it’s very wreckless to make recommendations without financial accountability.”

Councilor James Blair noted that he would like to move forward on discussing some of the more innovative recommendations, such as the jobs program and clinic.

“I think what we’re trying to do, and what everyone here wants to do, is try to find something that’s actually going to help people get out of the situation they’re in and not just kick the can down the road,” Blair said.

Councilor Tracey Wood, who voted alongside Stillwell and former councilor EJ Curry against the measure forming the task force, said he is still vehemently opposed to the task force, calling it a waste of time for both the city and taxpayers.

“I believe we have important business to do and I don’t want to reinvent the wheel,” he said. “I don’t think the problem is homelessness — it’s blurring the line between vagrancy and homelessness.”

Wood said he would not vote in favor of any of the recommendations put forth in present form by the task force.

The task force was established as an ad-hoc advisory body to the Yelm City Council through a resolution adopted by the council in a 4-3 vote on Nov. 13, 2018.

This story has since been updated to reflect additional thoughts from Mayor JW Foster. His previous comments have not been deleted for transparency's sake.

Tax dollars are involved and that is why the buck stops here .

Do your homework people