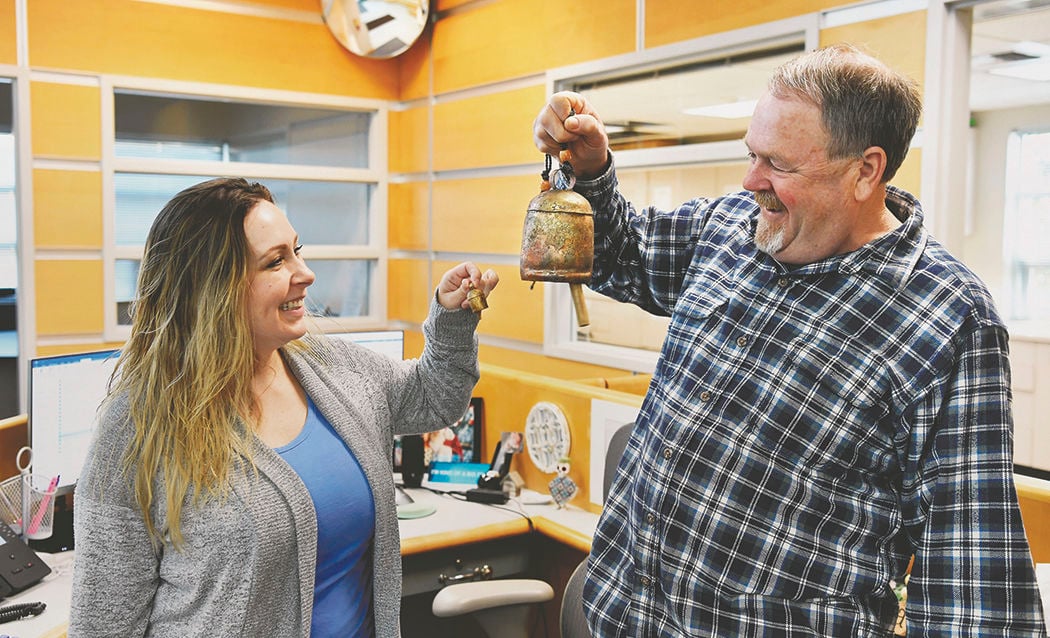 City of Yelm administrative assistant Ashlee Sund, 33, rings her tiny bell in unison with Yelm Mayor JW Foster last week to demonstrate how they greet each other in the morning. They ring the bells again on Friday afternoons to herald the coming of the weekend. 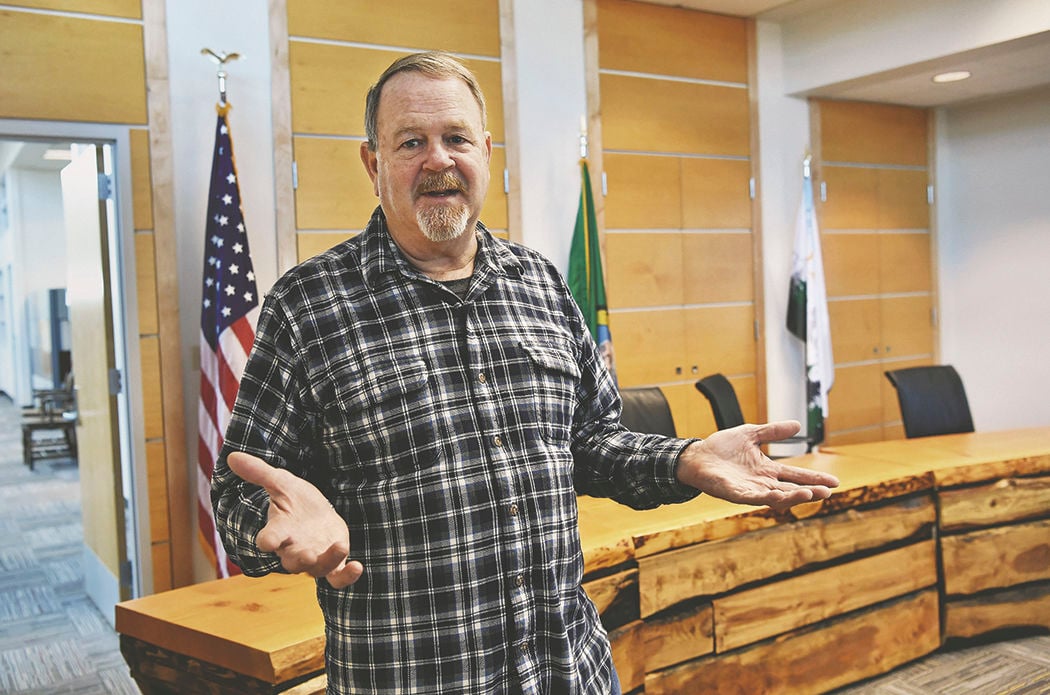 Yelm Mayor JW Foster shows off the distinctive furnishings in the council chambers of Yelm City Hall in this March file photo.

A coin’s spinning in front of Yelm Mayor JW Foster.

One side of the coin lists the public health emergency declarations recently enacted by Washington state, Thurston and Pierce counties, and the cities of Olympia and Lacey.

The other side of the coin lists the potential ramifications of those declarations: anxiety, apprehension, isolation … hoarding toilet-paper.

The declarations allow the county and cities to augment their normal daily activities to combat COVID-19, the illness caused by the novel coronavirus SARS-CoV-2. As of Tuesday, March 24, the coronavirus has sickened 11 people in the county and 2,221 statewide — with 110 deaths.

On Monday, Gov. Jay Inslee augmented earlier emergency declarations by issuing a “Stay Home, Stay Healthy” order. It requires all Washington residents to stay home “unless they are pursuing an essential activity,” such as shopping for groceries, seeing doctors or performing work duty that requires them to leave the house. The decree stipulates that all non-essential businesses close within 48 hours unless all employees can work from home.

Inslee’s order follows earlier declarations that imposed firm restrictions on social distancing that allow no more than 50 people to congregate at meetings and other gatherings throughout the state.

But despite the persistent sortie of emergency declarations surrounding him from all corners of the state, Foster will not declare a public health emergency for Yelm.

Not as of Tuesday, at least.

“It seemed to me like they (other jurisdictions) were creating these states of emergency just because everybody else was, but nobody could tell me what I would use the declaration for,” he said last week from his Yelm City Hall office. “The closest anyone could tell me is by declaring these emergencies they could suspend rules over spending money on things.”

And that in a nutshell is Foster’s Catch 22.

“I don’t need to do that, because I have nothing to spend the money on,” he said. “Nothing has arisen from this event (COVID-19) so far for which I have a program to put more money into, so I have no reason to declare an emergency to suspend the rules for expenditures.”

Besides, he reasons, Thurston County has been declared eligible to receive federal funding, some of which could find its way into Yelm’s pockets — and if he needs that money he’ll act accordingly.

“We would be in line for anything we needed, but we still don’t have a program into which we would put that money,” said Foster, who has been the city’s leader since 2016 and collaborates extensively with state, county and city partners.

“If we create a program that needs funding, and I have to declare an emergency to obtain those funds, then I would declare effective immediately. There’s no sense in me doing it now. I’ll do it when I need it.”

Which brings us back to Foster’s twirling coin.

“There are two sides to this coin,” he said. “These declarations are being done by those leaders to demonstrate that they are doing something (to help combat COVID-19), and that has some positive effect. But it also fans the flames of anxiety if you say that this is such an emergency that I have to take these emergency actions. People are getting nervous about that.”

For now, Foster prefers to just let the coin spin until, and if, he feels the need to nab it.

“I have chosen to take the tack of staying calm, trying to stay ahead of this, and looking for ways to spend money and help citizens. When I do find ways to do that I’ll look for programs and the money to spend on them.”

Foster can, however, envision a still-unlikely scenario that would require tapping city funds to combat COVID-19 — but that still wouldn't require him to declare an emergency.

“I would say if it gets really bad and there were a lot of sick people, I might find it prudent to create a medical clinic here in Yelm,” he said. “I have some money available to me in reserves to be able to create that facility, but even under that scenario I wouldn’t have to declare an emergency. I’d just have to go to the city council and ask permission.”

So given the city’s current situation, Foster’s not about to sound the alarm in a crowded movie theater. Instead, he’s calmly reenforcing the county health department’s stay-safe recommendations, he said.

“That’s the most important thing I can do right now. I want to help people understand that this is real, and there are some real things we can do to protect ourselves. I’m fully aware there’s an emergency right now. I just don’t need to run around yelling about it.”

Perhaps not, though the mayor’s encountered a few local residents on his periodic tours around town that needed a not-too-subtle earful.

He calls them “deniers.”

“I’ve talked with a few people who are just in denial,” said Foster, 64, a career firefighter/paramedic. “They think that this is all an overreaction, has been made up and is some nebulous plot. I worry about that.”

And that worry translates into stern lectures.

“I have taken a very direct approach in talking with the deniers and helping them understand that they can’t deny this because it’s bad, and they have to play by the rules.”

“They start off with ‘Yeah, we’ve lost a lot of business, and my wife has been laid off, but we’ll be fine.’ And then they make fun of people who hoard a lot of toilet paper,” Foster said. “And that’s about 90 percent of all the people I talk to.”

The flip side of “we’ll be fine” is particularly galling to some Yelm business owners: Their loyal employees are taking the brunt of the COVID-19 hit.

“The business owners really don’t like having to lay off their employees, and that this will be an economic problem for individuals. But even with the business restrictions, I don't see panic out here at all economically.”

“The most important day-to-day operations have not been affected at all,” he said, noting the continuing operation of the wastewater treatment facility, parks, road repair, police and fire departments. “We’ve had people show up at the lobby and have helped them through the phone get what they needed done, and we haven't had anybody be unable to complete their transaction with the city — we’re just doing it differently.”

Disruption of the city’s advisory boards and commissions has likewise not immediately affected operations.

“Nothing has been delayed that can't tolerate the delay, and there were no timely projects that were interrupted,” he said.

The city council, too, is still operating normally, but should COVID-19 force a change, the city could convert to virtual meetings, Foster said.

“If it comes clear that the virus is putting our council members in jeopardy by meeting in person, we would go to virtual meetings. So far they are comfortable meeting in person. It’s all up to their comfort level.”

Foster himself follows a strict anti COVID-19 regimen — an offshoot from his days as a firefighter/paramedic — though admittedly he bends the state’s guidelines some.

“I’m in that age group in which Gov. Inslee recommends we shelter in place,” Foster said. “I’m doing that, but I just keep moving the place. I have to.”

His “overly cautious” home routine, though, would make Inslee proud.

“When I go home I take off my clothes in the back room with the wash and put my inside clothes on like Mr. Rogers so I don't bring anything from the outside world back into my home,” he explained.

He’s not that strict with his city staff, though he keeps an eagle eye out to ensure proper social distancing. City workers are separated by enclosed partitions or offices that appear to keep them a safe distance apart.

“I’m watching and reinforcing the idea of the workers staying six feet apart and asking everyone to remind each other not to shake hands,” Foster said. “Within the family here, we feel that we are fairly safe in interacting at this level.”

Which is good, because only one of the 25 or so employees who work inside City Hall has the capability to work from home. The rest are tied to their city desks — logging into city computers that must be accessed in house — if they want to work. Which isn’t necessarily bad, Foster said.

“As long as we all feel safe here, there is a ton of work for them to do here — if nothing else to delete the 1,700 emails that have been piling up in their inbox.”

Should, however, COVID-19 infiltrate City Hall, operations — except for essential services — might quickly grind to a halt.

“I can’t take my cops off the street, and I literally can’t shut the wastewater treatment facility, and someone has to make sure water is coming out of the ground and into the pipes,” Foster said. “But I could shut down everything else in the city, and we would just go dormant. Nothing would break if we did that, but we’re not there, yet.”

The city has also decided not to shut off services for residents unable to pay their utility bills due to the impacts of the coronavirus — though their balances will continue to accrue. In the meantime, the City Council will consider amending the Yelm Municipal Code to allow customers to repay account balances in full.

But that’s about as far as Foster’s willing to go. The city can’t function without utility money, he said.

“Obviously we want people to stay employed, but if they are laid off they need to immediately apply for unemployment benefits and using that revenue stream pay their bills,” he said. “We’re not going to shut anyone off, but I’m trying to get the message out that people need to make some tough choices: feed your family, stay warm, pay your bills.”

And frequently wash your hands.

“The best thing that could happen to us is that six months from now we look back and can say that wasn’t so bad for us, because we took precautions seriously and fewer of us got sick than in other places,” Foster said. “That’s what I hope for our community, and that’s why I’m an advocate for these hygiene measures.”

And perhaps six months from now that spinning coin will finally topple to reveal what in normal times wouldn’t prompt a second glance: Abraham Lincoln on one side and the Lincoln Memorial on the other.

“Life goes on in so many ways, and you don’t want your life to stop permanently,” he said. “So pay attention and make good choices.”

For more information about the City of Yelm’s response to COVID-19, please visit www.ci.yelm.wa.us.