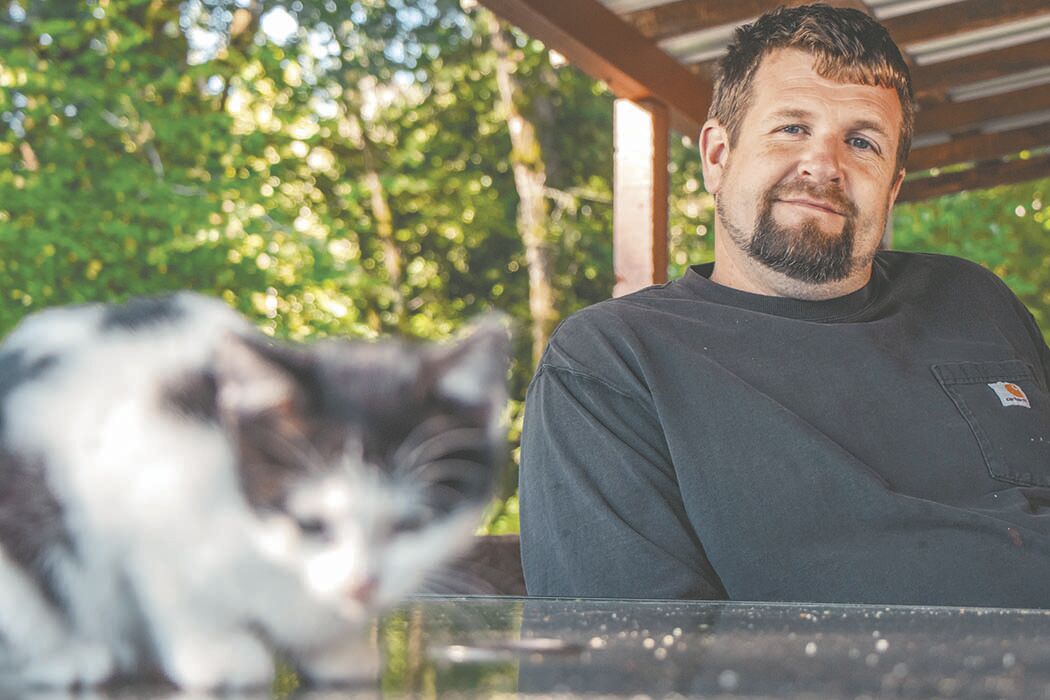 Blake Bennett smiles as he watches a kitten play on an outdoor table Thursday morning at his Salkum residence. 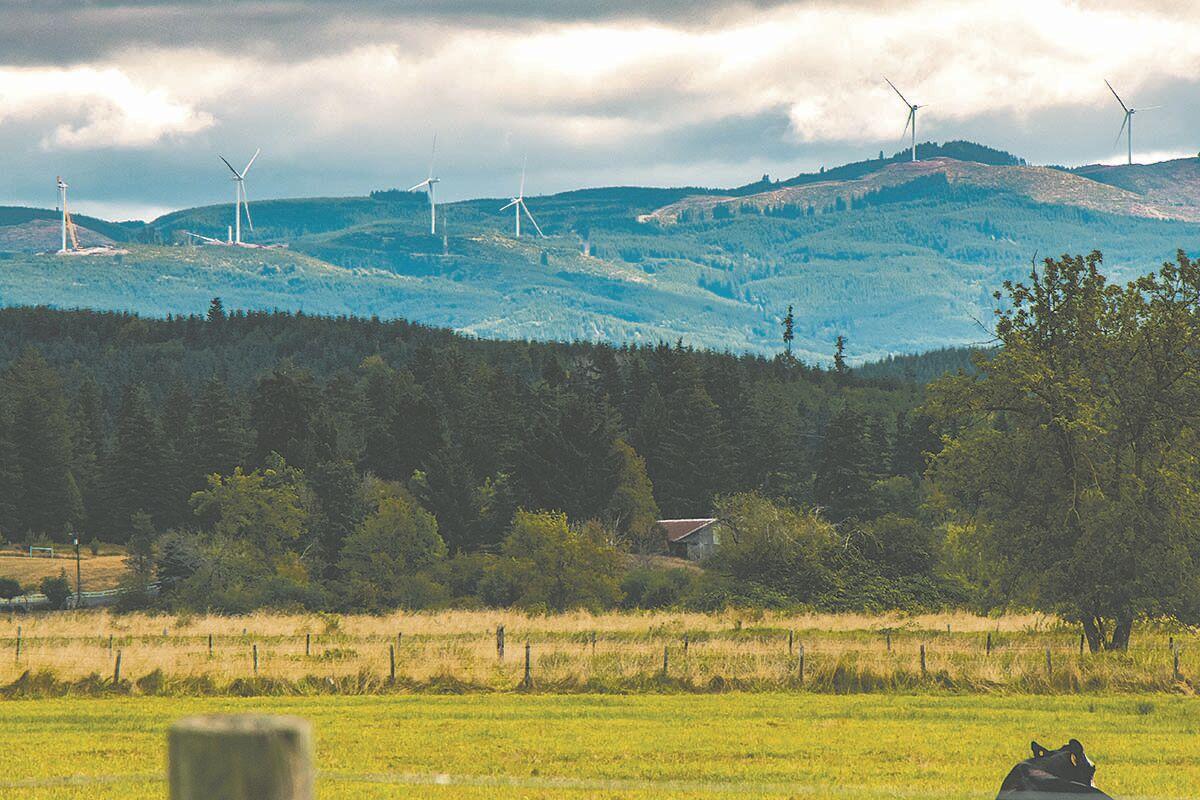 The Skookumchuck Wind Farm is seen from Big Hanaford Road in Centralia. 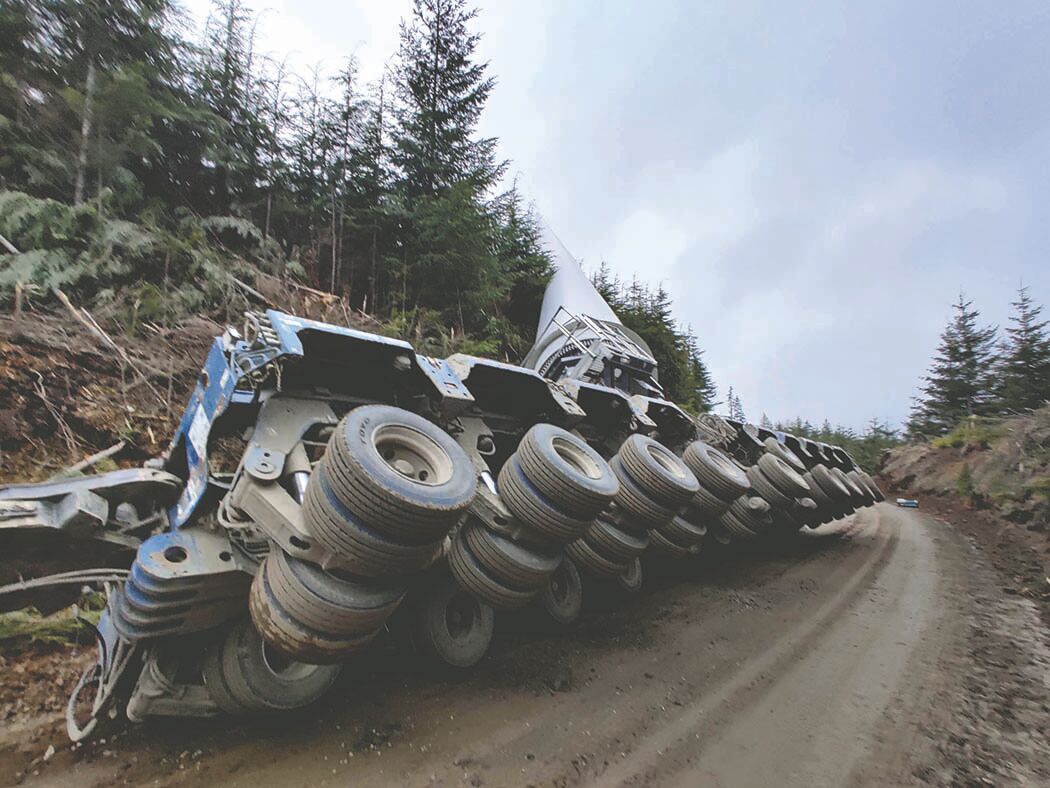 Blake Bennett, an injured worker at the Skookumchuck Wind Project, claims that the driver was going over the speed limit when a vehicle carrying a turbine section tipped over. 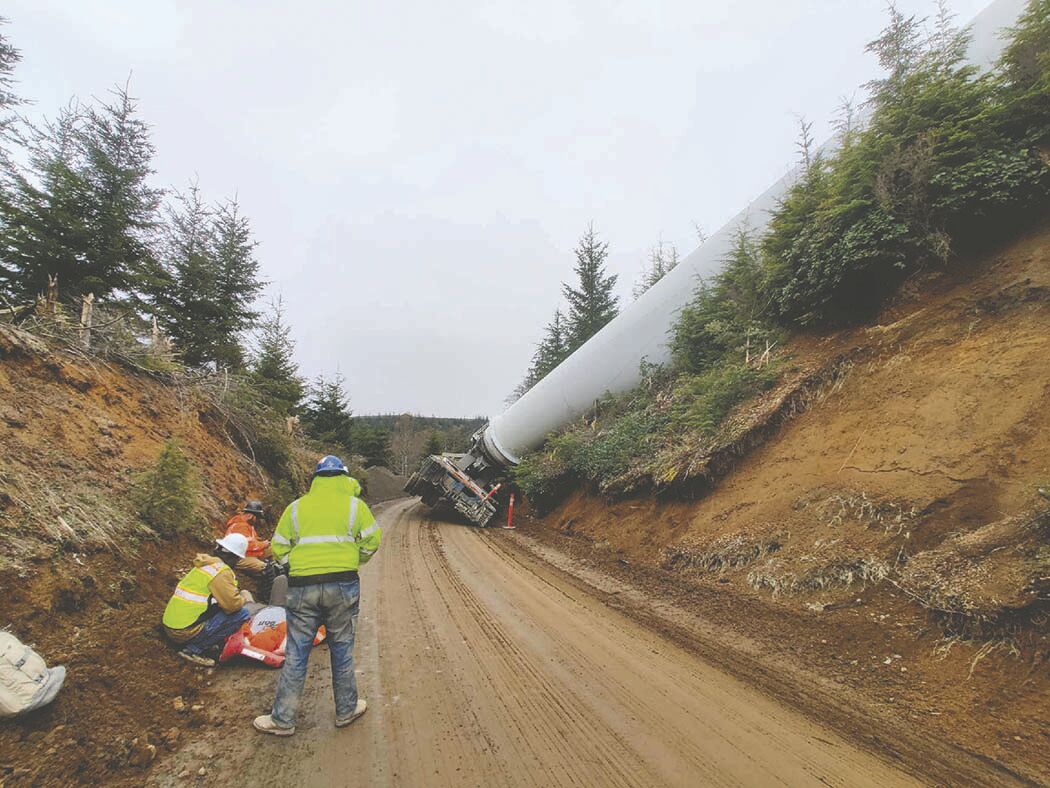 Blake Bennett, an injured worker at the Skookumchuck Wind Project, claims that the driver was going over the speed limit when a vehicle carrying a turbine section tipped over.

RES-Americas, the primary contractor of a wind farm currently under construction on the Thurston-Lewis county border, is denouncing a number of claims of recklessness and preventable work-related injuries levied against them by an injured contractor.

Blake Bennett, a safety and health manager with Mountain Crane Services, reached out to the Nisqually Valley News in early August with numerous claims about his experience working on the 38-turbine project. His story was published in the Sept. 3 edition of the newspaper.

Safety at the site has been in the spotlight since a 24-year-old Chehalis man died there earlier this year during a trench collapse. The death resulted in more than $500,000 in fines for the contractors involved.

The wind project is set to go online later this year.

Leaders with RES-Americas believe Bennett’s story contains “numerous false and unsupportable allegations that present an inaccurate (and sensationalized) narrative,” spokesperson Alicia Rivera wrote in an email, and that “RES Construction and the contractors on location have worked hard to create a safe working environment for all personnel.”

In a phone interview, Bennett defended his claims and said the story was accurate.

“That job has had numerous problems. You cannot deny what happened to me. I don’t know how they can say anything about what happened about me … Any accusations I make are based off what I’ve physically seen and been part of,” he said. “I’m just stating fact.”

The first discrepancy the company brought up was Bennett’s work history.

Bennett told the Nisqually Valley News he had worked on wind farm projects since he was 18. His first job, he said, was working for JMS Electric on wind farms near Walla Walla. He worked for the company for seven years out of high school, he said.

“The article suggests that Mr. Bennett has spent his entire career on wind farms,” Rivera wrote.  “However, RES Construction understands that Mr. Bennett recently joined Mountain Crane in late 2019 after spending the last 15 years in the roofing, fencing and road construction industries.”

While Bennett said it’s true that he’s been involved in commercial roofing and similar contracted projects for a great deal of his career, the insinuation that he hasn’t worked on projects recently is false.

He’s worked on multiple wind farm construction projects in recent years, including ones in Spokane and Grover, Colorado, he said. These projects were often on a contractual basis and would last anywhere from a couple weeks to a few months.

Though Bennett told the NVN he came on the job in November, RES claims the worker’s first day on the job was Dec. 16. He was then “intermittently” on the job in January, the company claims.

Bennett says that’s wrong, and that his start date was November as he originally had stated.

“Mr. Bennett never raised any type of safety complaint to RES Construction or Southern Power before or after the January 2020 incident,” the company said, adding that “RES Construction was shocked to read the article’s depiction of the April 24, 2020 event.”

Bennett and a crew of contractors were trucking up wind turbine sections on April 24 of this year when the truck carrying one tipped over. As the truck tilted into the trees, Bennett and the other workers got the impression that it was going to slide down the hill, so some of them jumped off, he said.

Bennett ultimately sustained injuries to his back and neck, he said, adding he likely won’t be able to work for another year.

But Bennett denies having drafted the trucking plan for that day, adding that the nature of his job as safety and health manager with Mountain Crane Services was to examine site safety based on established guidelines.

He said that even though he was entrusted to draft plans on the occasion, he came into the job with little prior experience (the work he’d previously done on wind farms was related to cabling and concrete).

“It wasn’t my everyday position,” he said. “RES wanted pieces up the mountain faster, so we were doing what we could to get three trucks up the road at a time.”

The company is also alleging that the incident took place at 6:45 p.m. instead of the estimated 3 or 4 p.m. Bennett had told the paper.

“(Our) investigations identified a number of findings related to Bennett’s crew including requiring improved communication between truck drivers and steerage, reduced transportation speed, proper positioning of the blade on the back of the truck, and eliminating the practice of personnel to riding on the back of a trailer unrestrained,” the company said.

The company also insists that no site-wide email sent out on June 24 instructed personnel not to speak with Bennett.

The Nisqually Valley News requested documents from Bennett to back up his claims regarding his first work date, the safety concerns he had filed with RES and the majority stakeholder Southern Power, as well as the specific names of the previous wind projects he’d most recently worked on.

While Bennett agreed to send them over, those documents were not received by Tuesday morning press deadline.

The Laborers’ International Union of North America’s Northwest Region (LIUNA) on Thursday, Sept. 3, released a press release calling for the hiring of local contractors who value high safety standards and the safety of their workers after the Nisqually Valley News published its article on Bennett.

LIUNA, which has more than half a million members, had previously come out in opposition to the wind farm’s construction. During a June 11 Lewis Board of County Commissioners hearing on the wind farm, close to 100 union members packed the meeting room to push for local hiring.

“The Skookumchuck Wind Farm project, being built by RES Americas-Inc., has already led to one death and multiple injuries, raising concerns about workplace safety,” the organization said in its recent press release. “In the article from the Daily Chronicle (first published in the NVN), allegations continue to surface from workers who are bearing the brunt of these unsafe working conditions.”