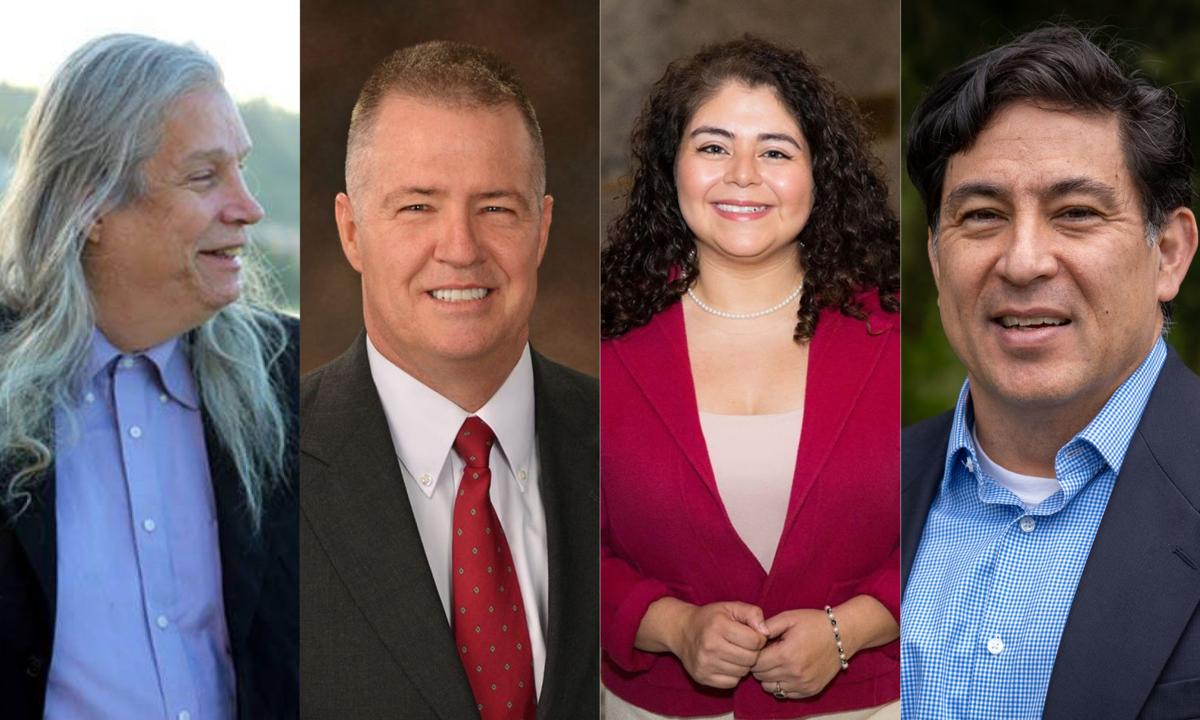 Four of the seven candidates for Thurston Board of County Commission, District No. 1. From left, C Davis, Bud Blake, Carolina Mejia, and David Gaw. 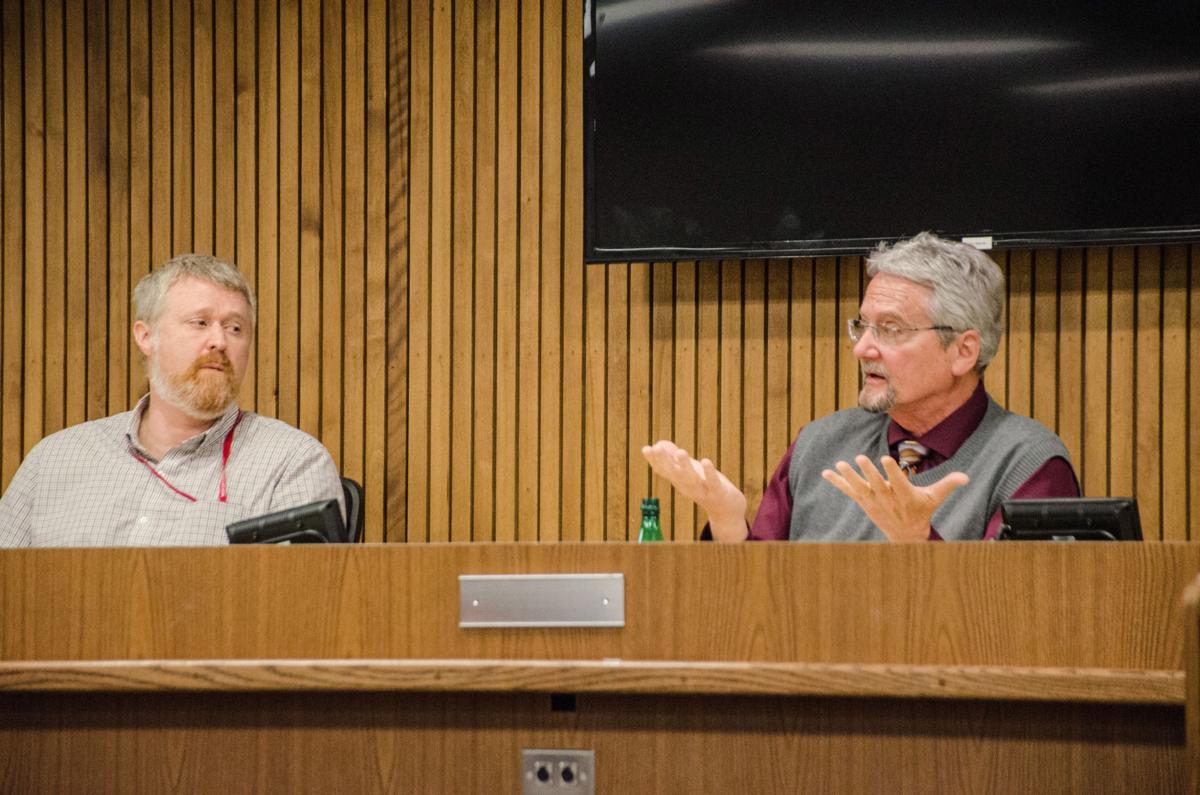 Editor’s Note: This is the first of a two-part series The Nisqually Valley News will publish on the race for Thurston Board of County Commissioners, District No. 1. A total of seven candidates have registered with The Thurston County Auditor’s Office for this seat, and today we’ll be featuring four of those individuals.

Six candidates are each looking to unseat current Thurston County Commissioner John Hutchings in the August primary election this year.

The Nisqually Valley News reached out to candidates this month with a questionnaire regarding their candidacy in this upcoming election. There are two seats on the Thurston Board of County Commissioners up for reelection this year.

Candidates David Gaw, Carolina Mejia, Bud Blake and C Davis will be featured in this week’s story. A second story on John Hutchings, Rory Summerson and Thomas Bolender will be published in an upcoming edition of The NVN.

Incumbent Gary Edwards, an independent, is also running for a second term on the board. He’ll face only one challenger: current Lacey City Council Member Michael Steadman, who’s running as a Democrat.

With the ongoing COVID-19 pandemic projected to put a significant strain on Thurston County’s budgets, all of this week’s candidates have put budgeting as a top priority if elected.

The primary election will be held Tuesday, Aug. 4. The two candidates for District No. 1 who garner the most number of votes in the election will move on to the general election in November.

According to the Thurston County Auditor’s Office, ballots will be mailed out July 15, and voters can update their information or registration online until July 27 or in person up through 8 p.m. on the day of election.

Candidates elected to the Board of County Commissioners serve four-year terms and currently make a salary of $126,588.

“I am a ‘people-person,’” Blake wrote in the recent questionnaire. “It is important to me that people are listened to, not just heard. I work for you. I hold myself accountable and my integrity is non-negotiable. My vision is to generate a Thurston County that you, your family and neighbors are proud to work, live and play — leave it better than we found it.”

Blake, 56, is hoping to leverage prior board service and expertise, as well as a long-term view of the county’s budget operations, to win over voters this August.

The one-term county commissioner formerly represented District No. 3 before being voted out in November 2018 as current Commissioner Tye Menser was elected.

Calling general budgetary matters of the “utmost importance,” Blake said there are a number of programs at the county that could be reduced or cut to make way for a fix to the county’s long-standing inability to balance a budget and as the COVID-19 crisis impacts governments coast to coast.

“These programs are nice-to-have, but not a priority — especially with a countywide emergency,” Blake wrote. “Priority based budget is the best approach, in routine or emergency conditions, and still delivers services.”

If elected, Blake said he would push for a task force to provide a 12-month recovery and exit strategy during the COVID-19 pandemic.

“By far, the county ‘needs to be available’ to help,” he wrote. “Under emergency legislation, the commissioners could reduce, delay fees and shorten the timeline for businesses to start or operate. The county should work with the community and businesses to build grants or loans for the most vulnerable small businesses as part of an emergency recovery package, even if the amount is nominal.”

Blake’s career in the U.S. Army spanned 25 years. He also holds two master’s degrees, one in human resources and one in organizational leadership.

C. Davis, a landlord and online marketer, is running for the Board of County Commissioners to revitalize the county and make it safer for residents.

“When I moved to Olympia 27 years ago, this was a clean, safe, friendly place. Over that time I have watched it go mad, with sewage from homeless camps pouring into creeks, streams and Capitol Lake,” Davis wrote. “I have seen the level of violent crime skyrocket, fueled by unimaginable drug abuse and people caught up in endless ideological warfare. I want the Thurston County that was.”

Back in 2018, Davis led an unsuccessful campaign to replace incumbent state Rep. Laurie Dolan, who represents the 22nd Legislative District. He ran as an Independent then.

Davis, who has worked for more than 23 years in information technology services, said the highest priority for the Board of Commissioners is to focus on getting people back to work while addressing what he believes will be the most severe budget crisis in history.

He cites his background in the private sector as a reason why he would be a good candidate to do more with less.

“The county has been running a budget deficit for more than four years. Balancing a budget is not the hardest thing, but it must be a priority, which clearly it hasn’t been for previous commissions. In order to recover from the economic collapse that we will experience after months of not working, no commerce, and related lost tax revenue, we will need to make hard choices,” he wrote, adding that he would be able to balance the budget with “economizing and growth, not more taxation.”

Having called the new regional courthouse complex initiative a “$300 million tax burden,” Davis said the county has a responsibility to fix and maintain the current courthouse at Lakeridge Drive.

“This is just irresponsible,” Davis wrote. “If the county needed to expand, which it doesn’t, it already owns ample land adjacent to the existing courthouse.”

Though he’s never held public office, Davis has also been a small business owner, having owned two antique shops throughout his professional career. With a keen ear for jazz music, Davis said he’s also been a semi-professional musician for more than 37 years.

David Gaw, an Olympia-based project manager, is running for a seat on the Board of County Commissioners to re-engage the board with those in the community, especially smaller cities and rural communities, he said.

“I want to see changes that reflect the integrity of county programs and services, as well as accountability of your tax dollars,” he wrote. “I grew up, and am raising three children, in our local rural areas. So often the voices of our smaller cities and rural communities are left out or overlooked, and I want to ensure that is never again the case. We can have a future together, where we can collaborate on solutions that make sense for all citizens in Thurston County.”

An alumnus of Western Governors University and The Evergreen State College with management and science degrees, Gaw, 48, said he plans on bringing extensive leadership and budgetary prowess to the position if elected.

“I will bring in a proven, successful evaluation system that looks at the benefits and value to the community of specific programs and services,” he wrote. “This system will look at the effectiveness of programs and services and the critical component of human health and public safety to assess what is critical to keep and what can be cut back.”

While Gaw said he believes it was right for the commission to take advice from staff and rescind the courthouse tax proposition, he believes there is ultimately strong justification on part of the county to pursue a new facility.

“There are significant security and safety issues that need to be addressed, that put our county staff and citizens in harm’s way medically, physically, and emotionally. The buildings have surpassed their reasonable life and will be more costly to taxpayers if we don’t act now,” he wrote. “This vote won’t go away, it will simply be extended and will become more costly as time goes on. But, with the current crisis, it is not feasible nor responsible to place such a burden on us as a community.”

If elected, Gaw said budgetary responsibilities will be his top priority, especially as the county projects a $5 to $10 million drop in revenue over the next budget cycle due to the ongoing COVID-19 crisis. Gaw has never held public office before.

“I will ensure we are maintaining a safe and healthy community, balancing prosperity economically and environmentally, as we find opportunities to mitigate the impacts of the virus on our local small businesses and on our most vulnerable neighbors. I will also be focused on sustainable economic growth, a continued growth management plan for the county, affordability, and green building as we move forward and engage with all residents and businesses of Thurston County,” he said, adding that it’s important the county protects its green spaces.

Carolina Mejia, a judicial assistant for Thurston County Superior Court, is running to serve on the Board of County Commissioners to bring a myriad of beneficial changes to the budgeting process, address affordable housing inequity and work to promote green initiatives.

“As a young professional, a mother of two girls and a resident of Thurston County, I feel compelled to address issues affecting not only my family, but Thurston County residents and our environment. I have a strong desire to serve our community and enhance its richness and diversity,” she wrote.

Mejia, 29, said her experience in law and finance will help guide her approach to the complex issues presented to those who serve in the office. Having worked on the current courthouse campus, Mejia said she’s knowledgeable in the inner workings of the various departments.

Due to her work in the county, Mejia was unable to say where she stands on the initiative to build a new county courthouse.

A graduate of Christian Brothers University who also attended the University of Washington, Mejia was unable to finish her law degree due to financial hardship, an issue she says is well-known to many of those who are struggling right now.

If elected, Mejia said she would prioritize transparency in the budget-drafting process in order to make sure the county has a strong rebound following the COVID-19 pandemic while at the same time pushing to rebuild the reserves for a rainy day.

“I will promote fiscal responsibility, accountability and transparency to deficit spending and be clear on what is being funded. Oversight of each department’s budget is necessary and placing an emphasis on accountable spending with departmental leaders is crucial. Base budget adjustments need to reflect critical needs while considering cost effectiveness. The budget should be prioritized and funded as such,” she wrote.

Editor’s Note: This is the second of a two-part series focused on the race for Thurston County Board Commissioners District No. 1. A total of …