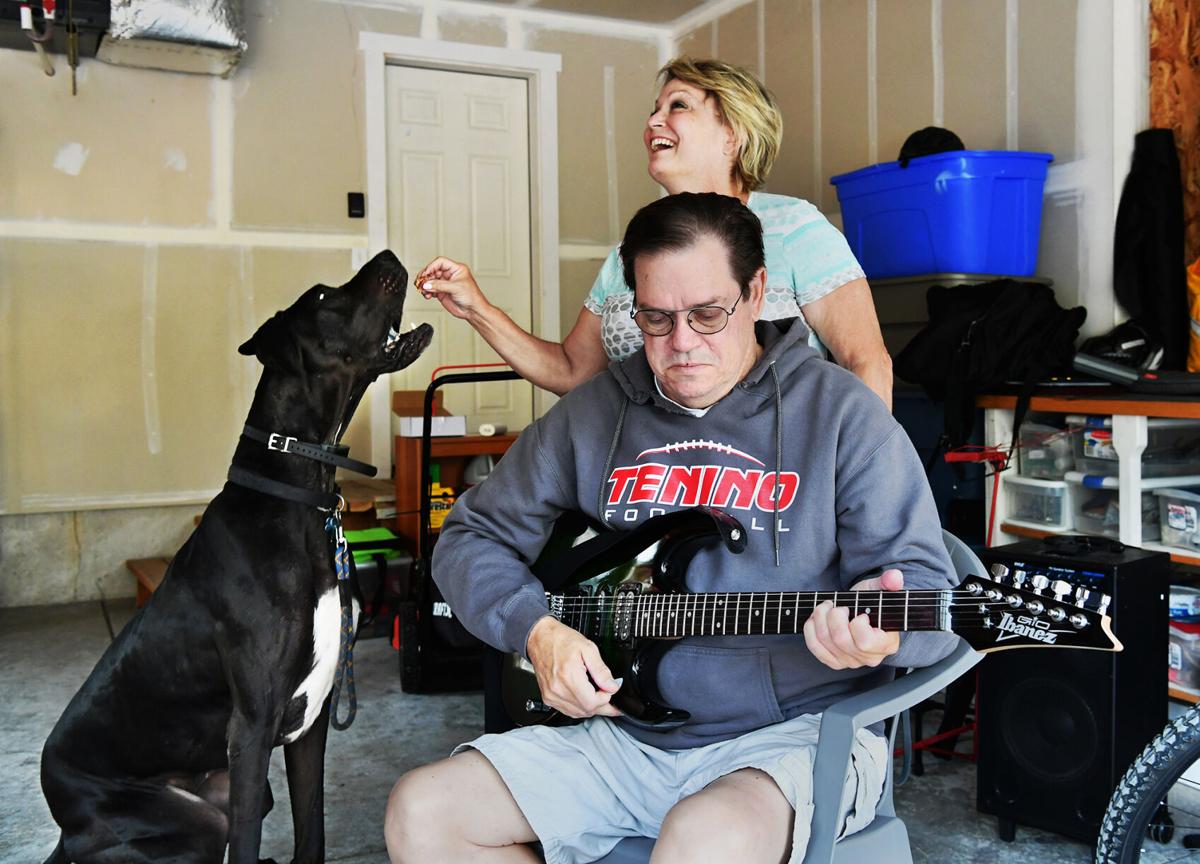 "Badge," a 2-year-old Great Dane, strains for a treat from the hand of Becky Swain, 59, who was married for three years to then recently retired Tenino Police Chief Robert Swain, seen playing guitar in the couple's Tenino home's garage on Friday, Sept. 4. Swain died on Sunday, Sept. 21, from stage 5 kidney disease. 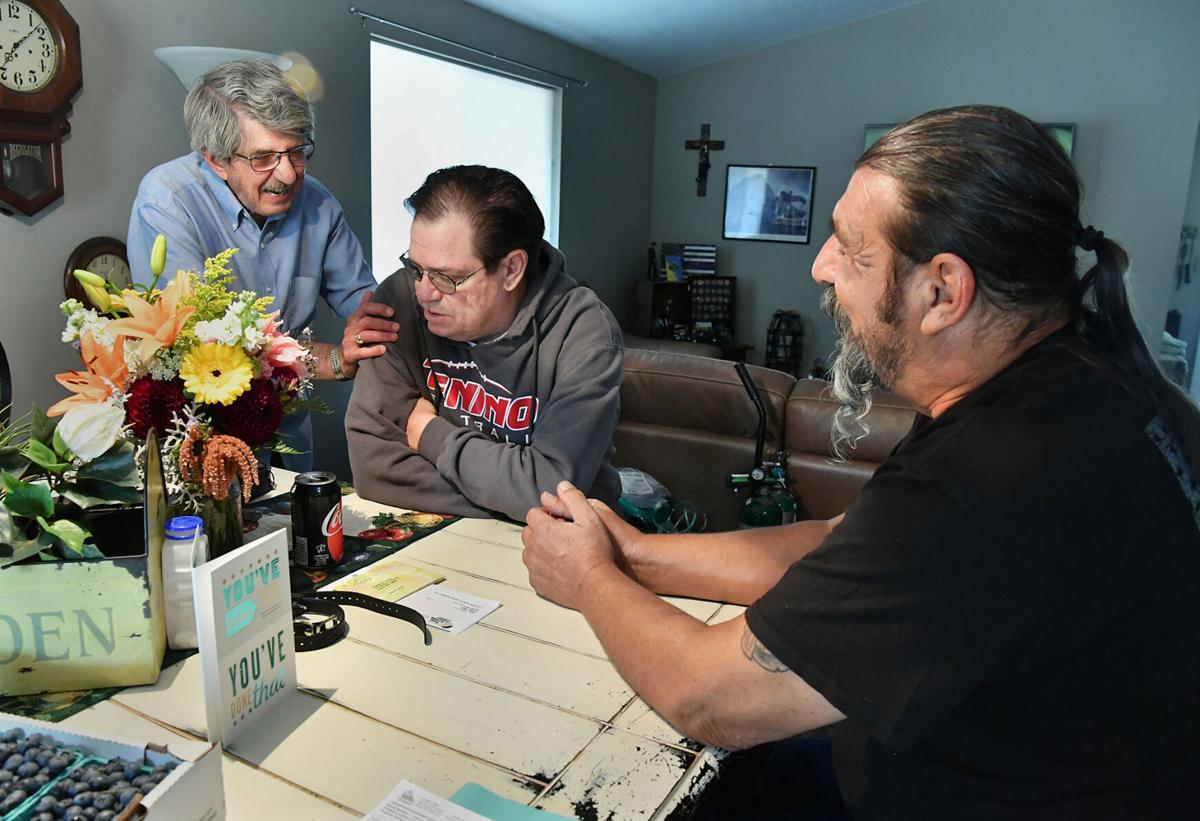 "Badge," a 2-year-old Great Dane, strains for a treat from the hand of Becky Swain, 59, who was married for three years to then recently retired Tenino Police Chief Robert Swain, seen playing guitar in the couple's Tenino home's garage on Friday, Sept. 4. Swain died on Sunday, Sept. 21, from stage 5 kidney disease.

Robert Swain, who recently retired after patrolling the streets of Tenino for two years as that city’s police chief, has died. The 60-year-old Colorado Springs transplant succumbed at home at 9:03 p.m. Sunday to complications of stage 5 kidney disease. His end came less than three weeks after he stepped away from a law enforcement career that had kindled his mind, body and spirit.

“Even as a child, this man prepared himself for law enforcement, and that’s the most he ever wanted,” said Swain’s first cousin Jurgen Grodhaus, 61, who lives in Blackfoot, Idaho, and from about age 10 grew up with Swain in Colorado Springs. “Even at Mark Twain Elementary School, Bob wanted to protect all the kids from bullies. He’s one of the good guys and embodies what we were raised to think policemen ought to be.”

Becky, her sister Jan Green, and a close friend were at Swain’s side when he died, a Pandora Mercy Me Christian Radio Station playing quietly in the background. At exactly 9:03 p.m. as Swain breathed his last, the song “Finally Home” came on the air, Becky recalled Monday.

“It was kind of surreal,” she said. “At 9:03 it was no longer a need for me to care for him, and he was now in God’s care. I felt this quietness come over the house, and my job on earth for caring for Bob was done and God was just taking over.”

For Swain, who supervised three full-time officers, four reserve officers and two police volunteers on the Tenino police force, it was the end of a storied road that had led him to the tiny “Stone City” in Western Washington. Swain ended up relishing his Tenino position beyond all others he’d had over the 40-year law enforcement career he so loved.

In a Nisqually Valley News story published shortly before he retired, Swain said this about his Tenino tenure: “By far, this has been the most exciting, exhilarating assignment I’ve gotten to do. I’ve gotten to do everything I’ve wanted to do as a police officer here.

“The community’s been so supportive of me … Tenino’s always going to hold a special place in my heart. The people here are just outstanding.”

Swain, who during an interview on Sept. 4 at his Tenino home, said he decided to go on hospice after the last of several stays in the hospital — his kidney disease exacerbated by diabetes and high blood pressure.

“I feel very, very at peace to go on hospice,” he said, rejecting the possibility of a kidney transplant and dialysis. “For a 60-year-old man, I’ve lived a very good life, and because of my faith in God I don’t think I need to prolong something that’s inevitable.”

Becky Swain agreed with and understood her husband’s decision.

“It’s important that people know his faith,” she said on Sept. 4. “I’ve never seen a man more at peace with this whole dying process, and it’s totally because of his surrendered life in Christ.”

“He was just very calming and had an easy spirit about him,” Fournier said. “He had experienced a lot of life and nothing razzled him no matter what was happening. He was just a cool character.”

He had to be: It came with the territory, especially before he arrived in Tenino.

Upon graduating, he returned to Manitou Springs until 1985 when he departed for the much-larger Colorado Springs Police Department.

Throughout his 22-year tenure at CSPD, Swain served on 17 assignments, including on a unit of the Bureau of Alcohol, Tobacco, Firearms and Explosives (ATF). He was later awarded the Medal of Valor by the department.

“There are five military bases and, because of that, there was a constant flow of population coming in and moving out. The big thing in the ’90s is gangs really came into Colorado Springs,” he said. “It was amazing. I felt like I was really going to make a difference, make an impact.”

Within less than a year of serving in Colorado Springs, Swain was shot in the pelvic area while responding to a domestic dispute call, he said.

“For several years, I would get a postcard from the lady who moved away with her kids — just letting me know how they’re doing, thanking me again. She was sure — I was sure she was close to getting killed by him that day,” he said.

Swain said he was also part of a group of officers who helped arrest part of the Texas Seven, a group who escaped a prison in Kenedy, Texas. The search for the inmates was chronicled on “America’s Most Wanted.”

Between 2007 and 2017, Swain worked in leading roles for campus police units at Denver and Tulsa public schools. He came to Washington in 2017 to be with his wife, Becky, whom he’d met at the First Church of the Nazarene in Colorado Springs.

And once ensconced in Tenino, Swain went to work.

A prepared statement from the city heralded Swain’s ability to coalesce with leaders in nearby cities and towns and to update and bolster the city’s police department.

“Bob believed that if something was worth doing, it was worth doing sooner rather than later.” the statement read. “He lost no time meeting with the leadership of every surrounding jurisdiction, and the Tenino School District, who he worked closely with to fully develop the school resource officer position shared by each school in the district.”

In whatever free time he managed, Swain could probably be found playing his Ibanez electric guitar or fooling around with his 140-pound black Great Dane “Badge.” The career police officer picked up the guitar at age 8 and by adulthood was playing solo gigs in Colorado Springs for weddings and other events.

“He’d been through a lot in his life with ups and downs, good times and bad, and I feel like he found a home in Tenino, and that helped him find peace,” Fournier said. “He loved the community, and the people here accepted him, and it was a good ending to a big, long story.”

According to Becky Swain, Robert Swain’s cremated ashes will be buried with full police honors on Oct. 3 in Colorado Springs.