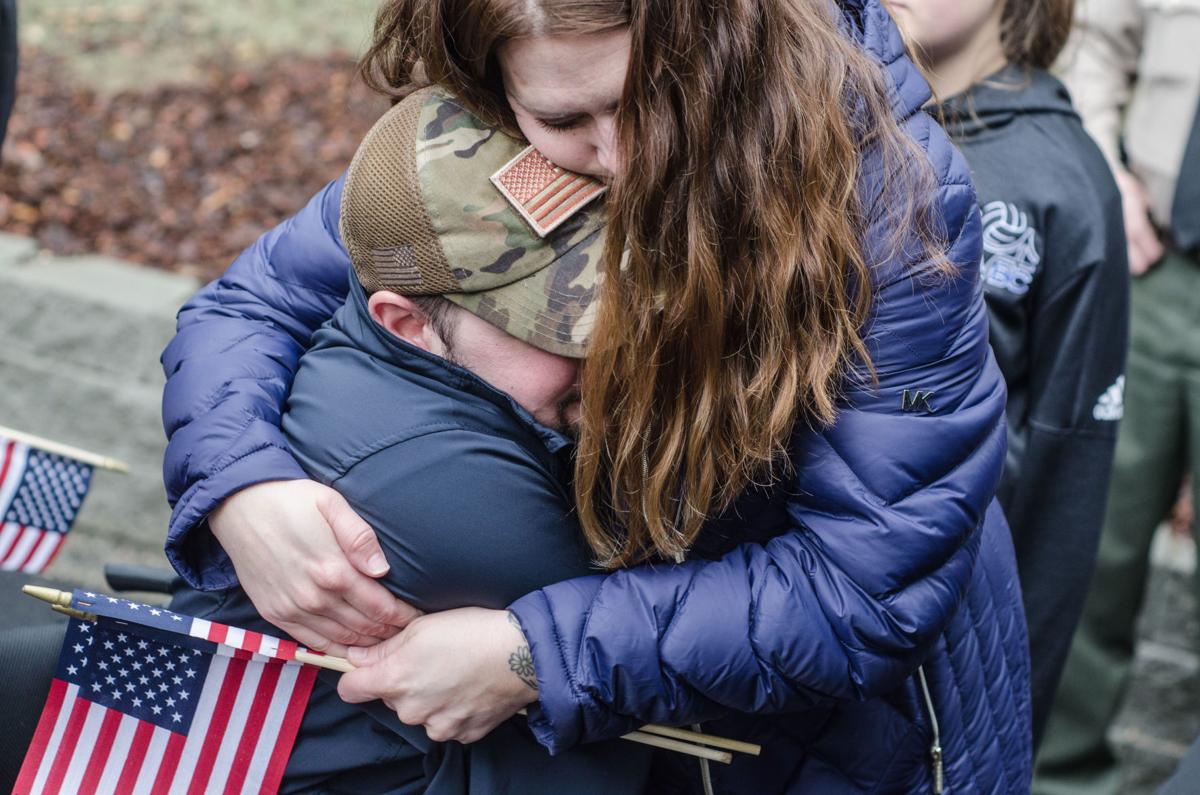 Sgt. Aaron Boyle was welcomed to his new home Saturday, Dec. 7, by family, friends, community members and complete strangers. The house was funded and built through nationally renowned nonprofit Homes For Our Troops and Saturday’s event marked the end of more than two years of anticipation for the Boyle family. 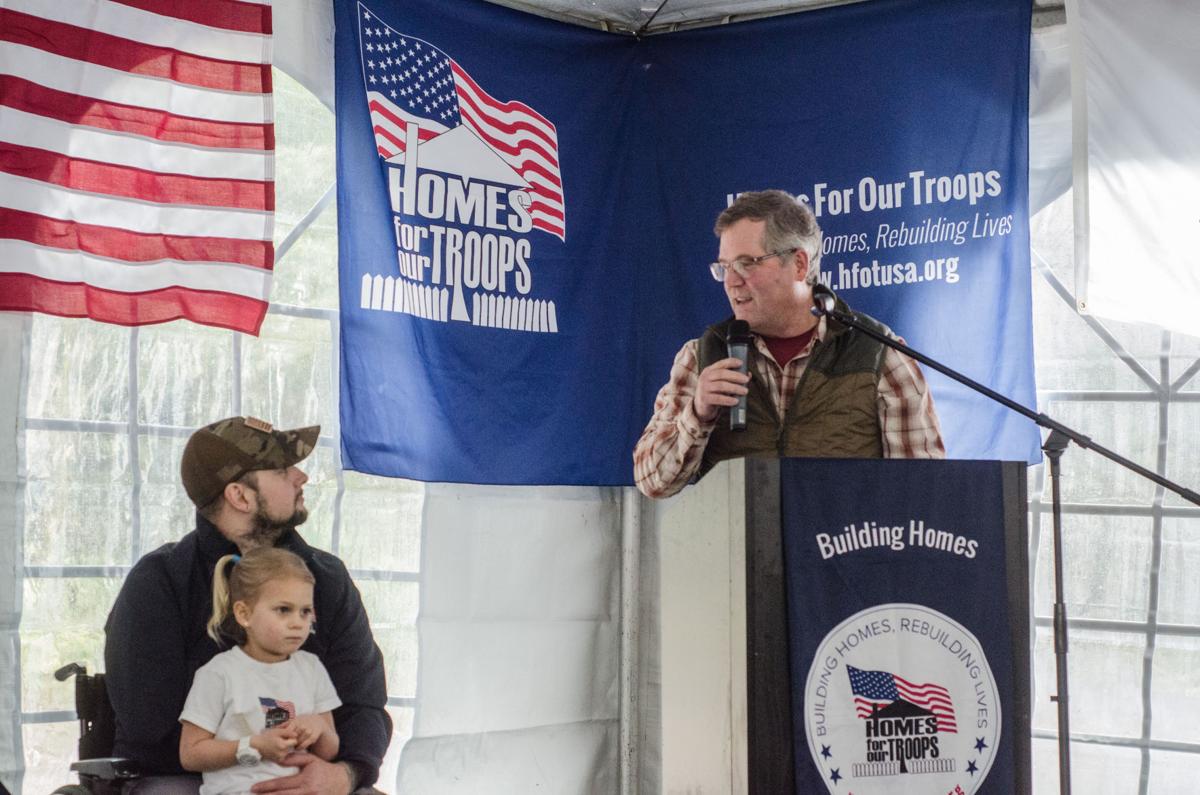 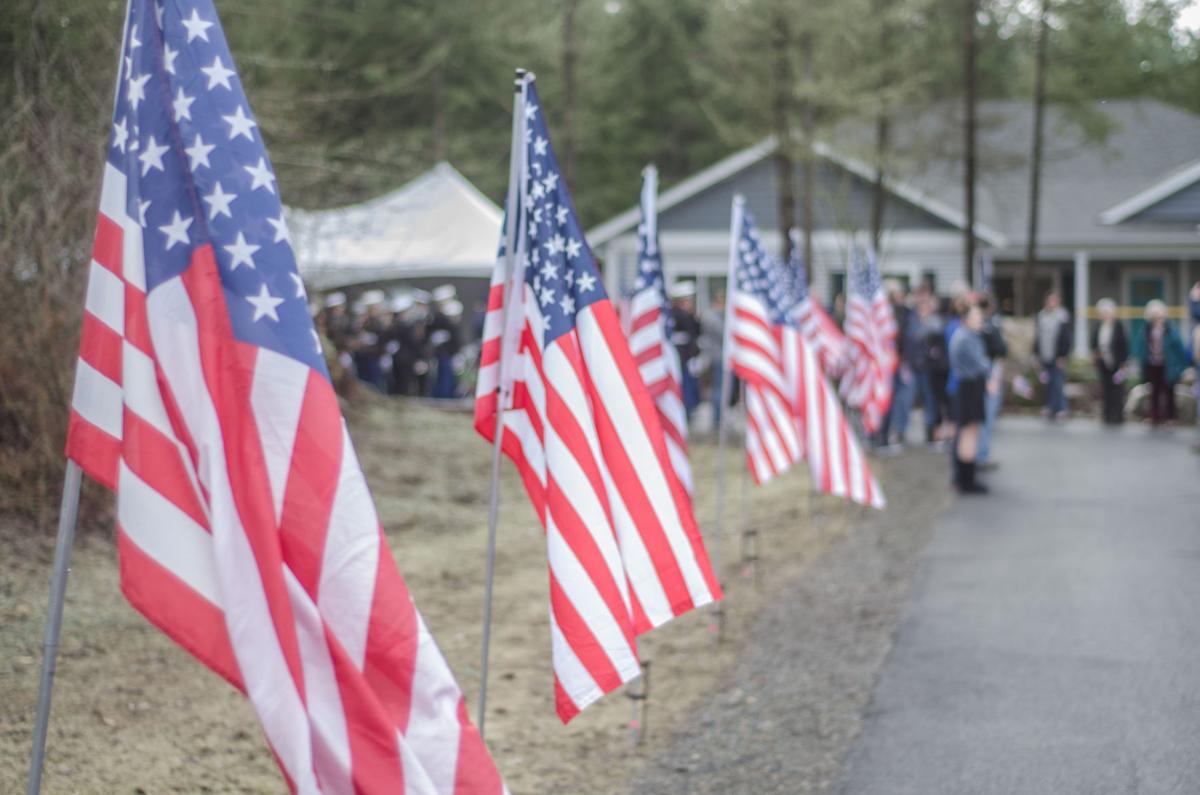 American flags line the driveway leading up to Sgt. Aaron Boyle’s new home on Saturday. Hundreds of community members, family and Jr. ROTC members drove out to see Homes For Our Troops hand over the keys to Boyle and his family. 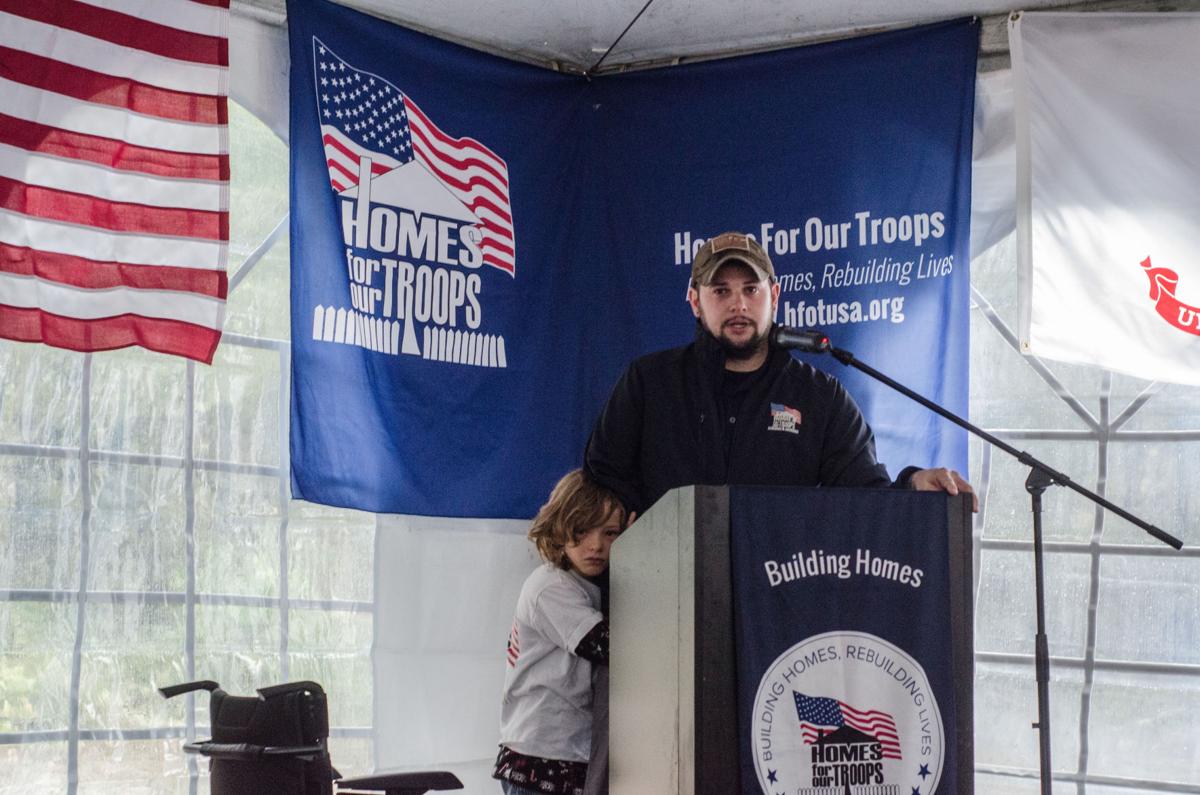 Sgt. Aaron Boyle speaks to the Yelm community and family members shortly before he was handed keys to his new house. Boyle stands, embraced by his son. 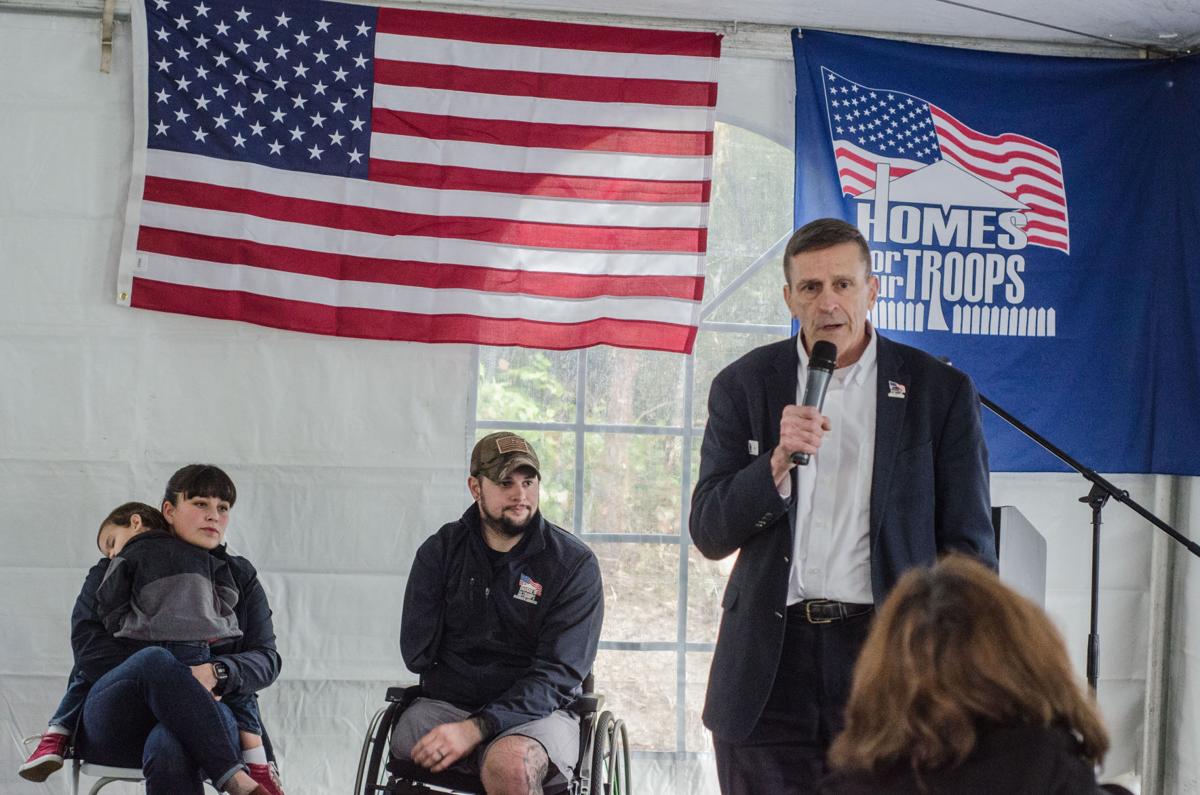 Homes For Our Troops Executive Director Bill Ivey speaks to hundreds of people Saturday afternoon shortly before handing the keys to Sgt. Aaron Boyle’s new home, which was built by the nonprofit. 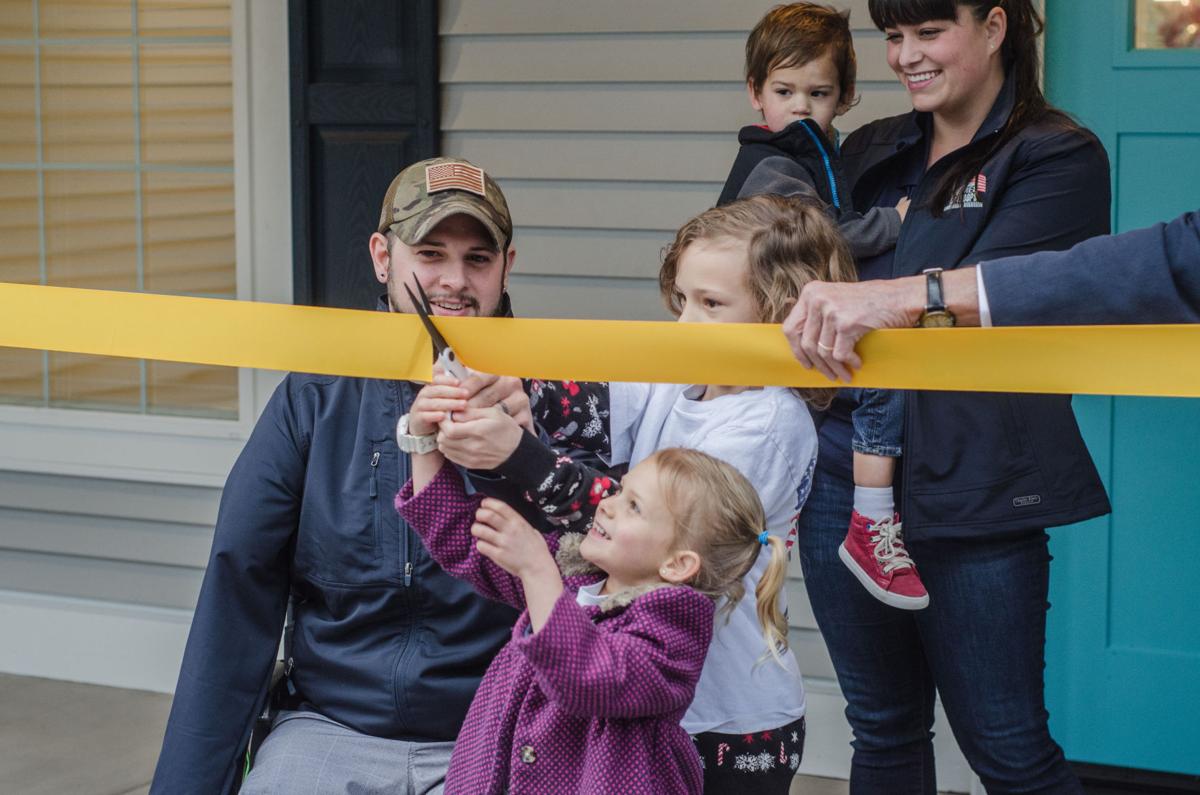 Sgt. Aaron Boyle and his family cut the ribbon to their new home in Yelm on Saturday. 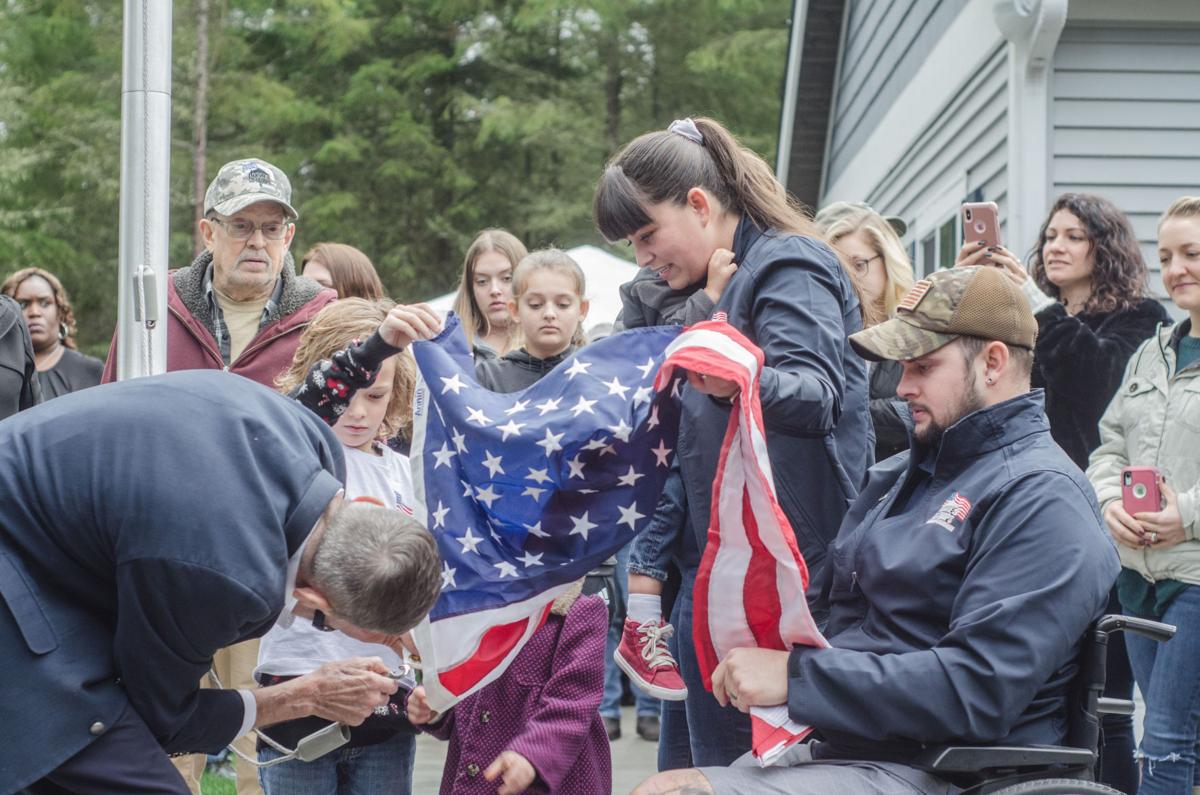 The Boyle family and Homes For Our Troops Executive Director Bill Ivey raise the American flag Saturday shortly before receiving the keys to their new home and cutting the ribbon. 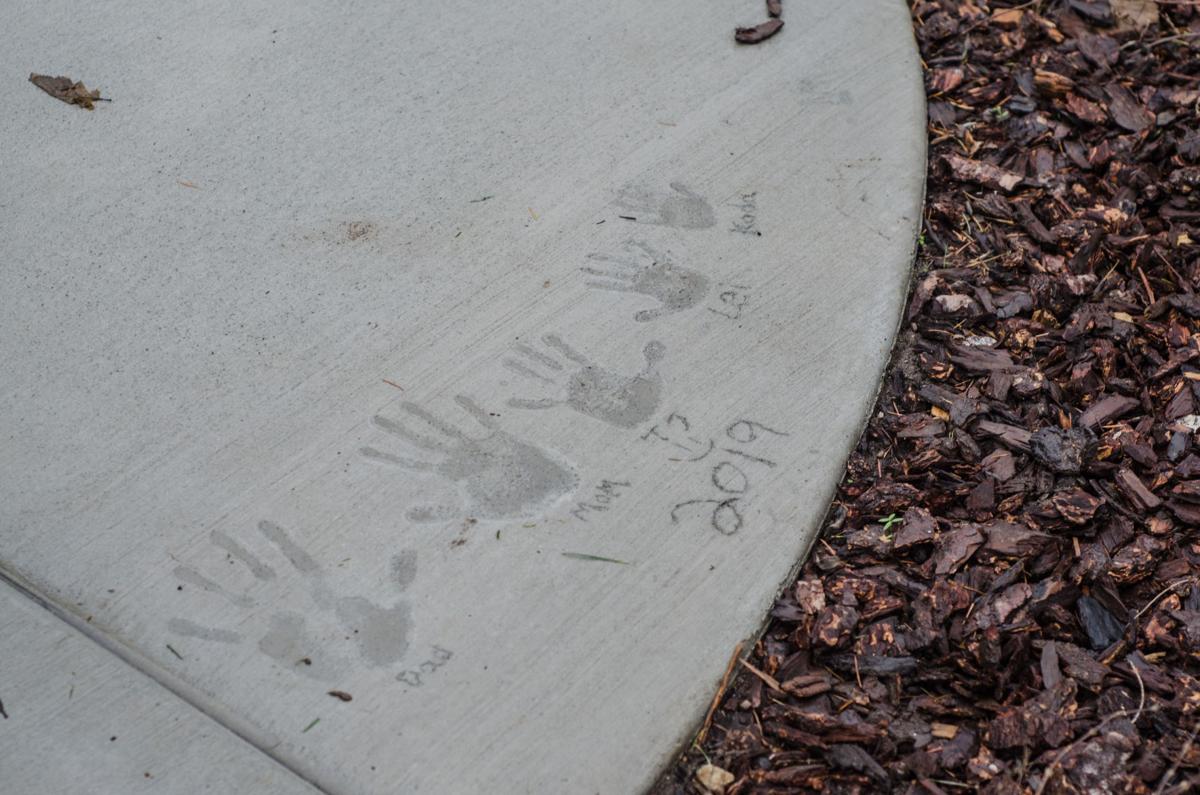 Handprints of the family were engraved in the concrete surrounding the Boyle’s flag pole.

This time, it was for the better.

Boyle and his family received the keys to their new 2,800-square-foot, specially-adapted house in Yelm on Saturday. The event signified the end of what has been a two-year process with nationally-renowned nonprofit Homes For Our Troops to get Boyle into a new home that better serves his mobility issues.

In September 2010, Boyle was severely injured after stepping on an improvised explosive device during a tour in Afghanistan. As a result from the blast, Boyle lost both his right arm and leg and suffered extensive damage to his left leg.

Now retired, Boyle, 30, wears a prosthetic leg and has been living with his wife Lynn and their three kids in Roy. Boyle’s previous home presented obstacles when it came to moving around the house, doing chores and helping take care of his children.

Boyle’s new house is the 290th mortgage-free house that Homes for Our Troops has built for veterans in need.

During a speaking period shortly before Boyle’s flag was raised over his house and he was handed the keys, Homes for Our Troops Executive Director Bill Ivey said the home isn’t just about helping a family in need, it’s also about repaying a debt the men and women serving in the military and abroad have paid.

“It’s not about the house. It’s about what they can do when they have the house,” Ivey added.

Ivey also said the volunteer day last October to landscape Boyle’s home was the largest the nonprofit had ever experienced.

Suzanna Maloney, and advocate with the U.S. Army Wounded Warrior Program, shared the experiences and the time she’s spent with the Boyle family since they met in 2011.

“I’ve watched the family grow, develop, experience life challenges, succeed in ways that I don’t think they could have imagined,” Maloney said. “There’s more to Aaron than what I can tell you in a few minutes. But his commitment to health and physical well being is extraordinary. His love and commitment to his family is even more extraordinary. I’m inspired by Aaron’s everyday life and the love these two people, Lynn and Aaron together, share with those around them.”

During his speech, Foster, who served in the Marine Corps, pointed out to the United States Army Flag and said “This we’ll defend.”

“You now stand as icons for the rest of us and our community to say ‘This is who we are,’ and we hope as a community we’re always going to be here for you, not just on landscaping day, not just for handing you the key, but for whatever you guys need,” Foster said.

Edwards, who served in the Army, said the nation’s democracy is protected by the work veterans do.

“We wouldn’t be here if it wasn’t for our vets,” Edwards said. “It really doesn’t matter where you served or when you served, you were a piece of that puzzle that kept us free when it boils down to it … You are a piece of the success of this nation.”

Holding her child, Lynn Boyle, Aaron’s wife, recalled the moments that led up to this moment and what the new house means for her and her family of five.

“In the future, Aaron will not be as mobile as he is now. He will get older and his body will break down … Those amenities that Homes For Our Troops has given him, like the pull down shelving and the accessibility in the toilet, it’s going to take that burden off … I’m able to focus on our children,” Lynn Boyle said. “We are forever grateful.”

After speeches, Ivey assisted the family in raising an American flag above their new house. “God Bless America” was performed and echoed throughout the front yard. The Boyles then accepted the key from Ivey on the footsteps of their new home, cut the ribbon and took their first tour as a family of the four-bedroom, two-bathroom house.

Boyle effortlessly wheeled his way into his new home.

Attendees flowed in and out of the new Boyle residence, examining the amenities and wide open space. People pulled Sgt. Boyle left and right to talk with him.

Boyle said the last couple months have been very busy for his family. Not only have they been busy for the holidays, but they’ve been getting all their stuff packed up to make their move across the Nisqually River.

The Boyles officially began the move on Sunday, Dec. 8.

“If it wasn’t for Homes For Our Troops, where would us vets be?” Boyle said.