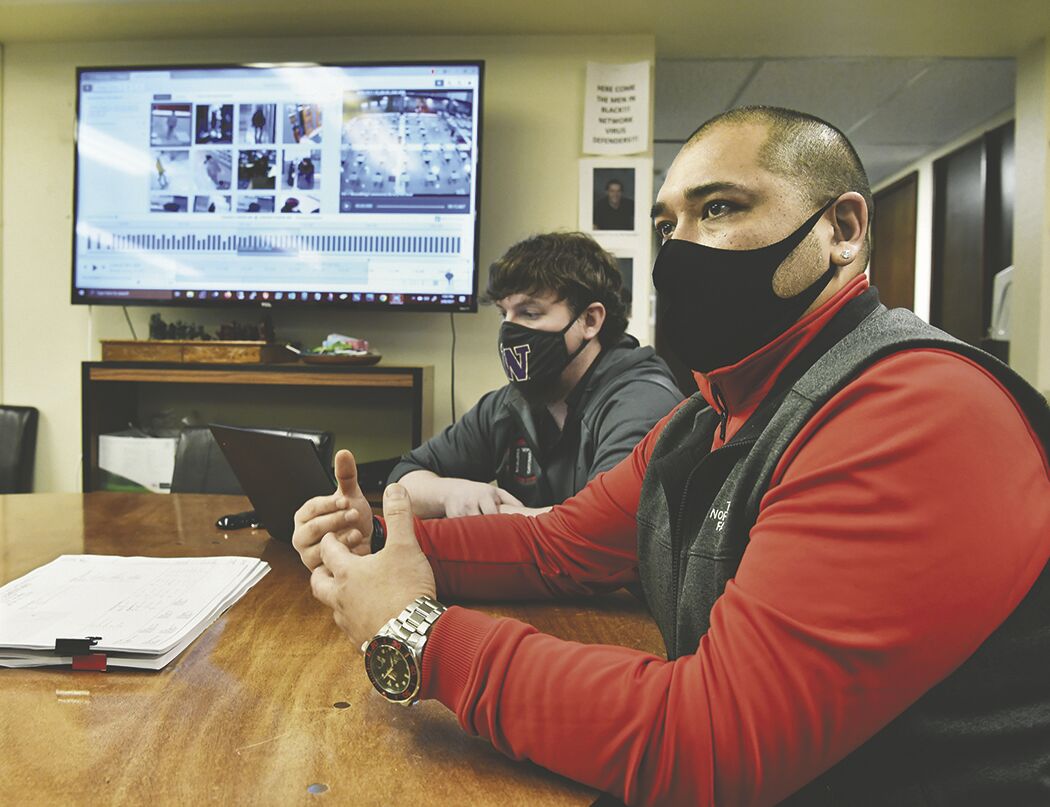 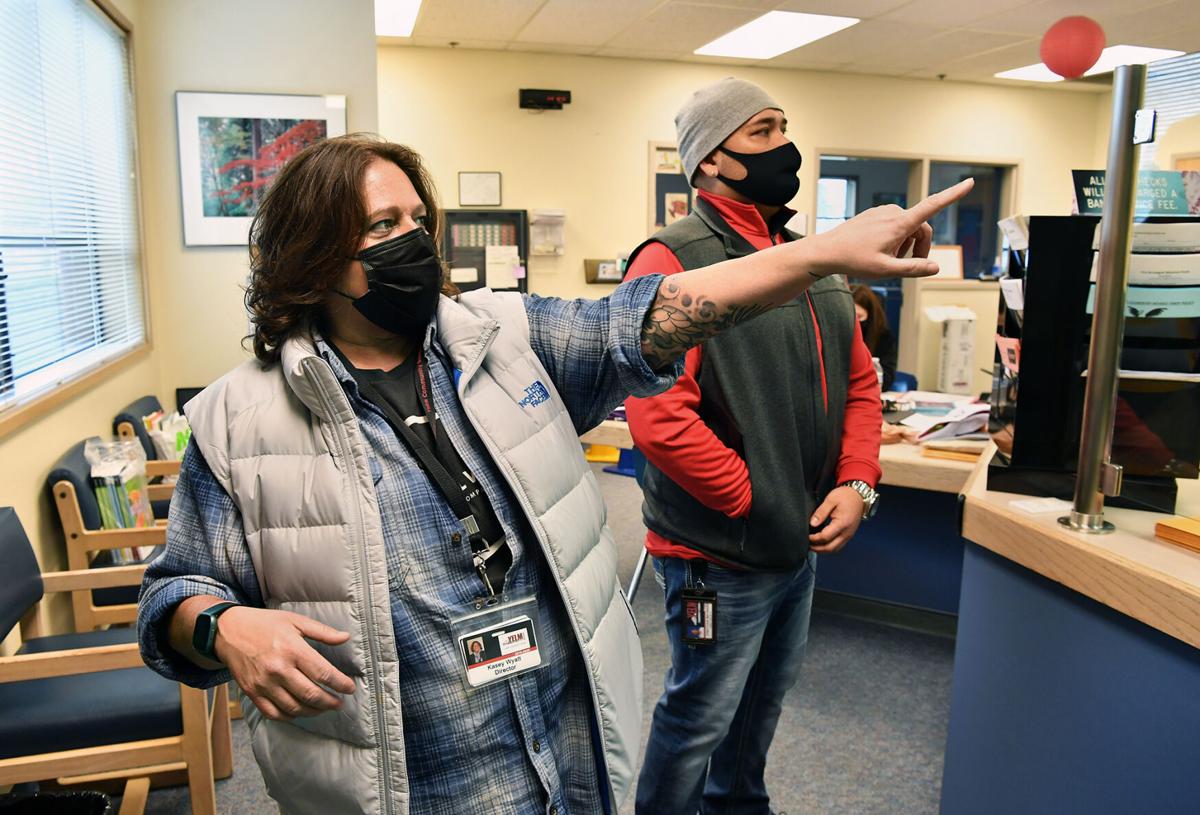 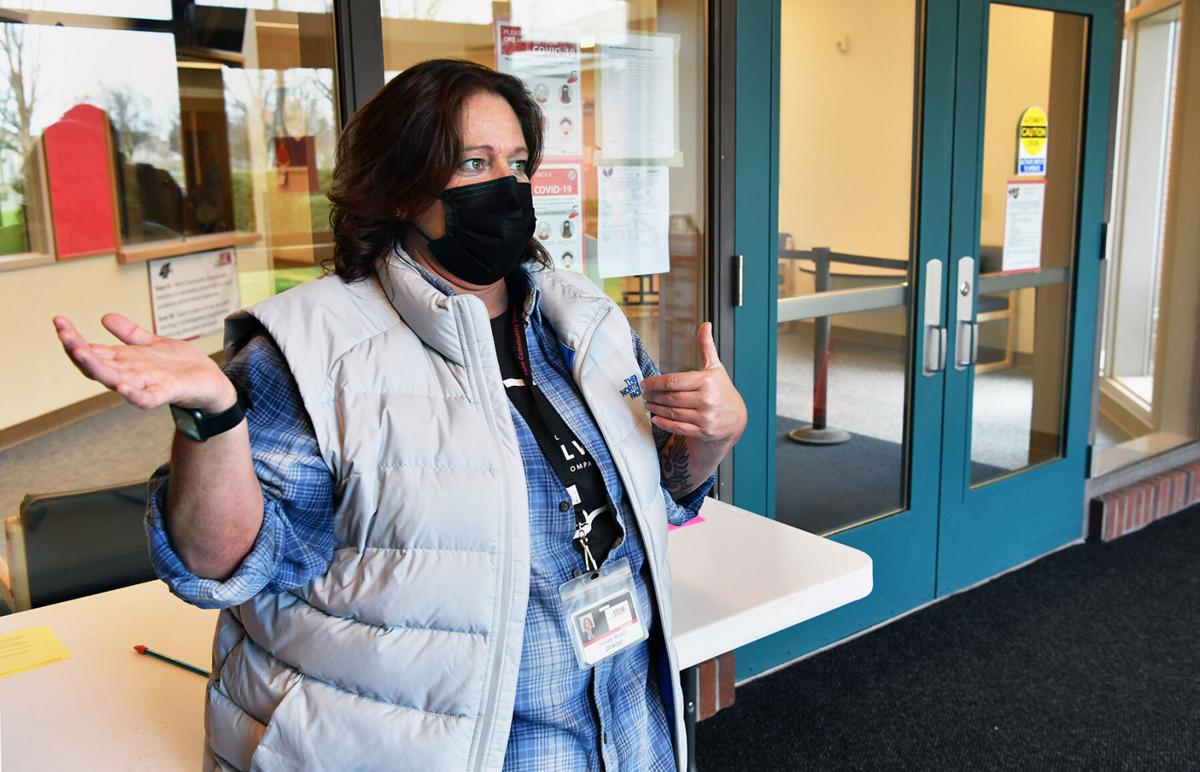 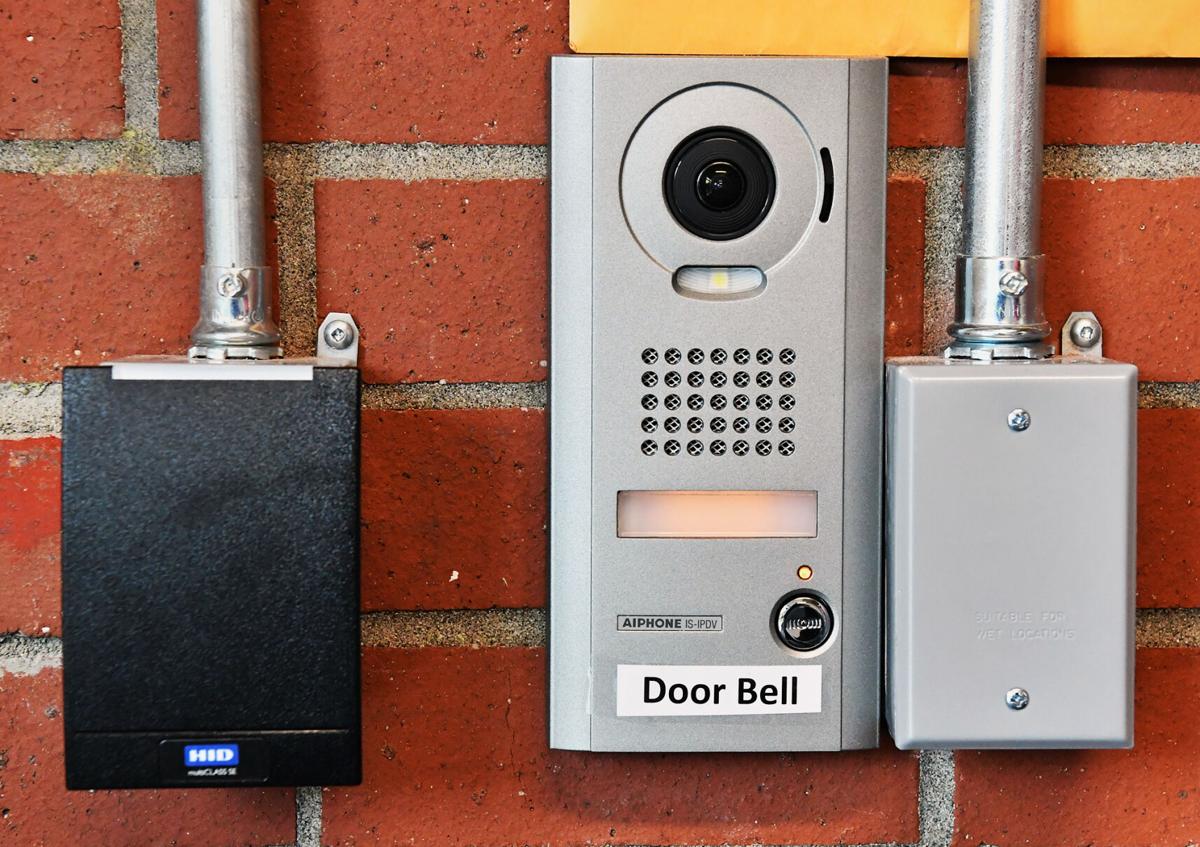 As part of Yelm Community Schools safety and security improvements, this doorbell/intercom system notifies school staff at Fort Stevens Elementary School of people who want to enter the office. 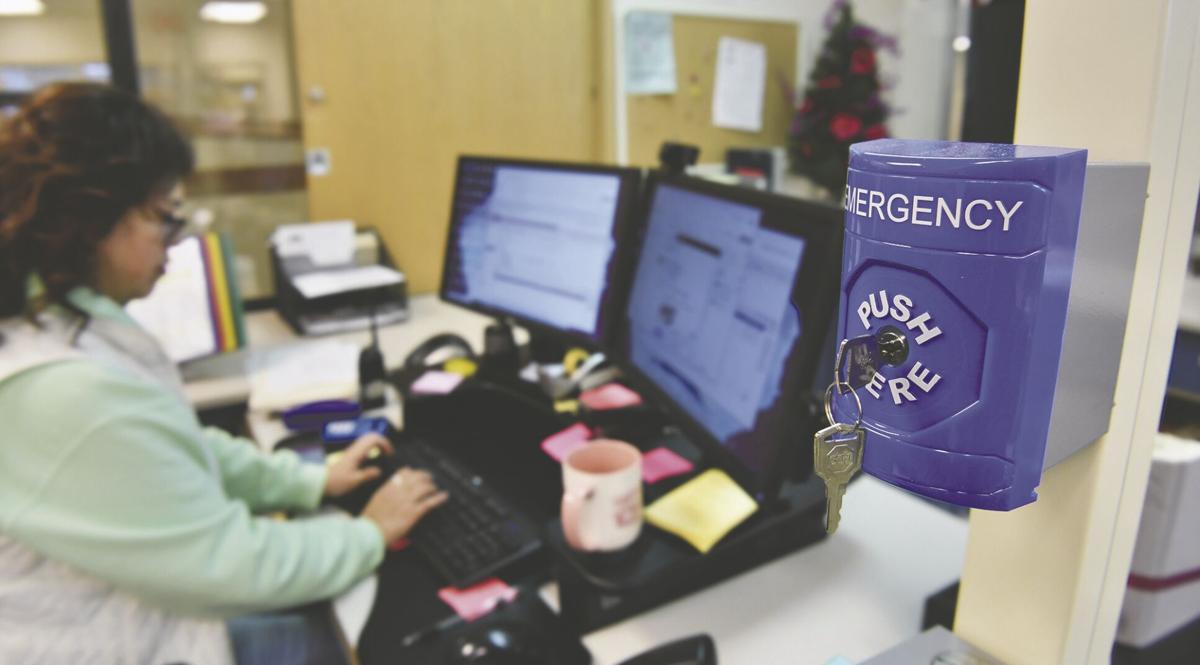 As part of Yelm Community Schools safety and security improvements, this "lockdown mechanism" at Fort Stevens Elementary School will provide security if the school receives a threat. 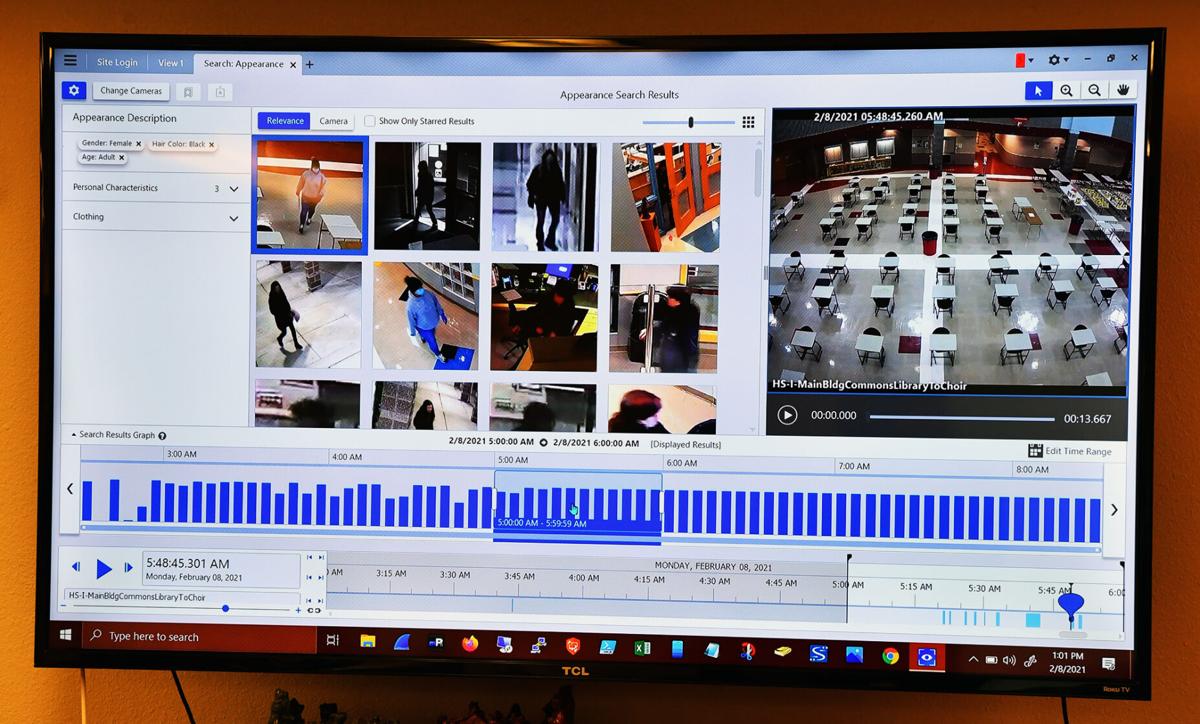 The school in your neighborhood is about to get a whole lot more secure.

That’s because safety and security upgrades at five Yelm Community Schools buildings are currently in the final stages of completion, effectively bringing many of the district’s medium-age schools up to date with 21st century security technology.

All schools will soon be outfitted with closed-circuit camera monitoring systems, front-office security vestibules, new lockdown systems for exterior doors and many other site-specific upgrades.

Yelm High School, Ridgeline Middle School, Mill Pond Elementary, Prairie Elementary and Fort Stevens Elementary are the schools currently in the final phases of receiving these upgrades. Lackamas and McKenna elementaries, which will require more site-specific work, will also receive the upgrades and will go out to bid in March with an expected completion date of October.

This effort has been funded through a $98.9 million bond proposal that the voters passed in 2019, which is also funding the replacement of Yelm Middle School and Southworth Elementary. Due to last year’s coronavirus-fueled economic recession, the district has been benefiting as bids for multiple projects come in more competitively and lower than previously expected.

The goal of the upgrades is to make Yelm’s schools more secure and safe for students and staff while allowing business to continue to be conducted effectively during operation hours.

The Nisqually Valley News toured Fort Stevens during a recent visit to take an early look at the new systems being used.

Parents and visitors will be immediately greeted with a security vestibule — an enclosed, secure entrance — upon entering the building. Visitors will then need to ring a doorbell to the front office and show their identification to a camera before being checked in.

Bond money has also gone toward door installations on classrooms at Fort Stevens Elementary. The building is designed so that classrooms share an open-plan hallway, similar to a cul-de-sac, that presents safety concerns with lockdowns.

“Prairie is basically the same footprint, the same floor plan,” said Kasey Wyatt, the bond project manager. “And so we did the exact same thing at Prairie as we did here. Mill Pond was just access controls, vestibule and cameras. We did some ADA improvements to all the sites with the push buttons.”

Due to site limitations, Lackamas and McKenna elementaries will be the only two schools without a vestibule. Instead, gates and cameras will be installed outside the buildings.

The information technology department, as well as the schools, have access to all live feeds of the closed-circuit camera systems, said Director Jonathan Maynard, and the goal is to record and hold up to 30 days of footage.

The Yelm Police Department will also eventually be outfitted with access to the camera systems. That ability to have access to eyes in the school’s hallways and exterior is a game changer, said school resource officer Don Moody.

“With 1,200 students at the high school, it really gives them the eyes they didn’t have before,” Moody said. "In my 20 years in this department, in both a reserve and full time officer, this is probably one of the biggest and best investments that the school could have made.”

The number of cameras will vary school to school. Fort Stevens has about 20 cameras currently installed and it is expected the new, two-story Yelm Middle School will have around 60.

The police department was also recently able to utilize the cameras following a recent wire theft that occurred at Fort Stevens. Though thieves made off with roughly $10,000 worth of wire, the infrared-equipped cameras were able to pick up intricate details of the person and vehicle.

That suspect, though, hasn’t been caught.

In addition to the recent rollout of new active-shooter protocol and preparedness, Moody said he’s confident in the department and district’s new abilities.

"You can't do much more to make our students safe," he said.

These tech safety upgrades should also last near the lifetime of many of these older schools.

“What we’ve chosen is the most reliable,” Wyatt said. “It’s cutting-edge technology that’s going to be here in 10 to 20 years.”

Wyatt and Maynard demonstrated the camera access from the hub at the IT department. The camera has many features, Maynard said, including the ability to track people walking through artificial intelligence that can catch either humans or animals walking by.

The AI in the camera system is also so powerful it allows them to search subjects up by the color of their shirts. Going through footage, Maynard was able to deduce that the first staff member at Fort Stevens probably came in around 5 a.m. that day.

Maynard said the ability to install these technologically-advanced systems stems from a larger investment by the school district that’s been happening over the last few years. By overhauling the district’s fiber network and making other investments, the school now has the ability to provide each classroom with 10 gigabytes of data on demand.

Districts twice as large as Yelm, such as North Thurston, don’t have that capacity, Maynard said.

“Just two years ago, three years ago, we couldn’t do our state testing at the Yelm High School gym. The system would crash,” Maynard said. “We’re a thousand times faster now. We completely overhauled the system.”

The technological capacities of school districts have also been underscored due to the ongoing COVID-19 pandemic.

The district also has the ability to log keycard usage. Whenever a staff member uses a keycard, data on who is using it, where they’re using it and at what time is recorded.

“Each time this card is scanned, it leaves a footprint of where they’ve been in the district,” Maynard said.

Superintendent Brian Wharton said the finished results at the five schools have exceeded his expectations, especially with many of the site-specific necessities.

“Having the door systems, the entry systems and the camera systems integrated into a single system is powerful. My highest priority is that it helps me know who’s on campus,” he said.

All the principals at the five schools have been trained on using the new security systems, and training is likely still underway for office staff members.

“I’m just so impressed with everything they’ve got so far for us already. It’s great,” said Fort Stevens Principal Lisa Crowell, noting that it’s been great to have their K-2nd grade students back in the classroom. “I think anything we can do to make our schools safe is great, but the real work right now is getting our kids back into school.”