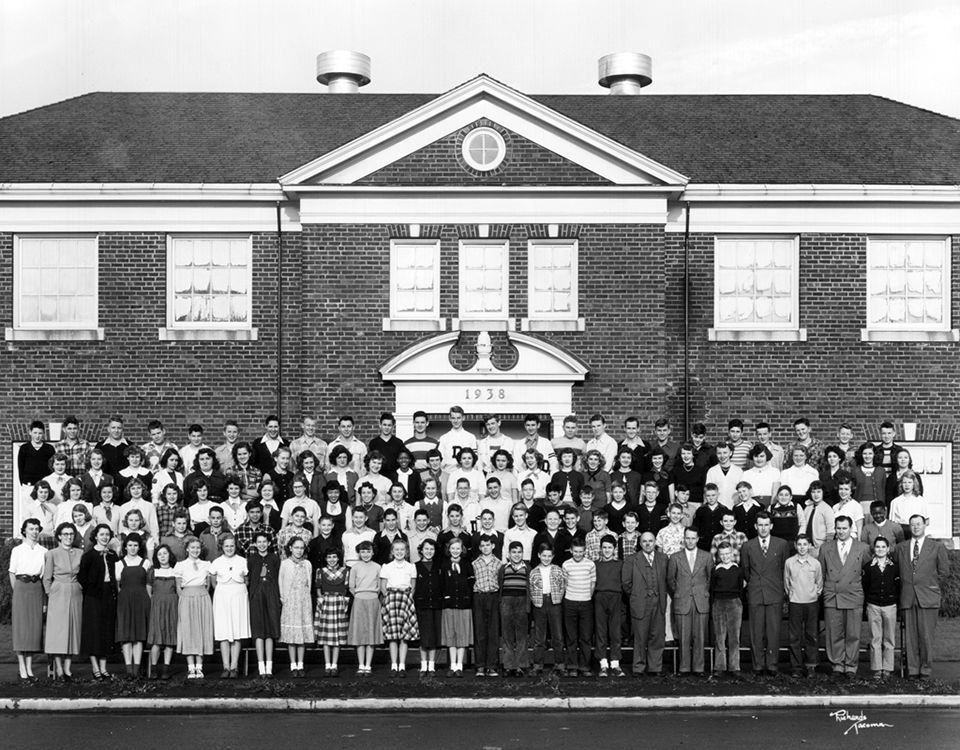 Students and teachers in front of DuPont School in Pierce County, Dec. 8, 1950. 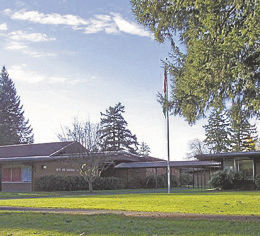 Students and teachers in front of DuPont School in Pierce County, Dec. 8, 1950.

Camp Lewis, the forerunner of Fort Lewis (and later Joint Base Lewis-McChord) in Pierce County, was constructed in 1917 without family housing or schools. After World War I ended, families moved on to the installation and their children attended the nearby civilian DuPont School. Educating the children from Fort Lewis created a burden for the DuPont school district, which did not collect property taxes from the fort. In 1949 Fort Lewis representatives testified to the U.S. Congress that DuPont had an unreasonable burden. A federal law was passed providing funds to school districts impacted by a large military presence. With this funding, school construction began at Fort Lewis and the adjacent McChord Air Force Base. Quickly a boundary issue emerged between the Clover Park and DuPont-Fort Lewis school districts over which had responsibility for schools on the bases. The battle lasted 15 years until Clover Park was identified as the school district for Fort Lewis and McChord Air Force Base.

Camp Lewis opened in September 1917 as a World War I training center where troops would be stationed a short time before going to battle. A few officers who brought their families lived at the Tacoma Country Club or in cabins on American Lake. They sent their children to the DuPont School, a brick veneer building with four classrooms, located across Pacific Highway (later I-5) from Camp Lewis. With the end of World War I, Camp Lewis became a regular post but with a limited troop population. This left hundreds of vacant camp buildings, which married personnel could convert to family housing through self help. Soldiers and their families partitioned the buildings, added kitchens and created livable homes. Their children were sent to the DuPont School, paying tuition of one dollar per month. To meet the increased student load, the school added a three-room addition.

In 1928 Camp Lewis became Fort Lewis, a permanent post with family housing for officers and noncommissioned officers. An agreement was made between the Fort Lewis commander and DuPont that the latter would provide elementary schooling. This agreement ended the tuition charges and the State of Washington provided DuPont limited financial aid. Fort Lewis officials helped by providing the school with surplus buildings. In the first year of the agreement, 142 Fort Lewis children attended DuPont School. The agreement for providing classes from kindergarten to ninth grade was made formal in 1936.

By 1939 the number of Fort Lewis children at DuPont School had grown to 222. Among them were the son and daughter of Major (later General) Mark W. Clark (1896-1984): William D. Clark (b. 1922) and Patricia Ann Clark (1926-1962). William Clark would go on to graduate from the United States Military Academy at West Point in 1945, later becoming a decorated Korean War veteran. On March 19, 1941, DuPont School Superintendent Wendell Laughbon (1902-1978) wrote Colonel Mark Clark, then at the War College, seeking his assistance in obtaining federal funding. Colonel Clark replied in a return letter that he would speak with Washington congressional representatives. He also wrote glowingly of the DuPont School and Bill and Patricia Ann’s three years there. Federal assistance soon arrived in the form of a Works Progress Administration project that added six new classrooms.

Fort Lewis high school students were bused to Stadium High School in Tacoma or to Clover Park High School. In 1940 John Eisenhower (b. 1922), son of Colonel Dwight D. Eisenhower (1890-1969) (later General of the Army and President), attended Stadium High and graduated that year. On July 3, 1940, McChord Field was dedicated as a bomber training base with few family houses, thus with limited school needs.

From 1922 to 1941, local school districts did not receive federal assistance when they educated military dependents, and they could not tax federal military bases. In 1941 Fort Lewis accounted for 231 of the 309 students at the DuPont School. In July 1941 the new federal Lanham Act funded housing and school construction in areas impacted by war defenses. Lanham projects at McChord Field and Fort Lewis created family housing, with 250 homes built on Fort Lewis and 102 houses at McChord Field. These complexes increased student enrollment at the DuPont School. Additional Lanham funds were received to add more DuPont classrooms.

In 1947 Lanham Act funding ended and with it federal assistance to overburdened local school districts. Also, at this time the 2nd Infantry Division arrived at Fort Lewis. Many of the soldiers came with their families and school-age children. It was the time of the postwar baby boom. The DuPont-Fort Lewis School District found itself unable to meet the demand, so DuPont opened an annex on post. The former 3rd Infantry Division headquarters at Division Street and Wyoming Street (later Bitar Street) became a school. This still did not meet the demand, so a former World War II hospital alongside the Pacific Highway became an eight-building annex. It educated 425 students from Fort Lewis and McChord Air Force Base. The annex remained in use until 1966 when new school construction finally met Fort Lewis needs. During the immediate postwar years, Fort Lewis and McChord Air Force Base high school students attended Clover Park High School in Lakewood. At DuPont more than 75 percent of the students were Fort Lewis children.