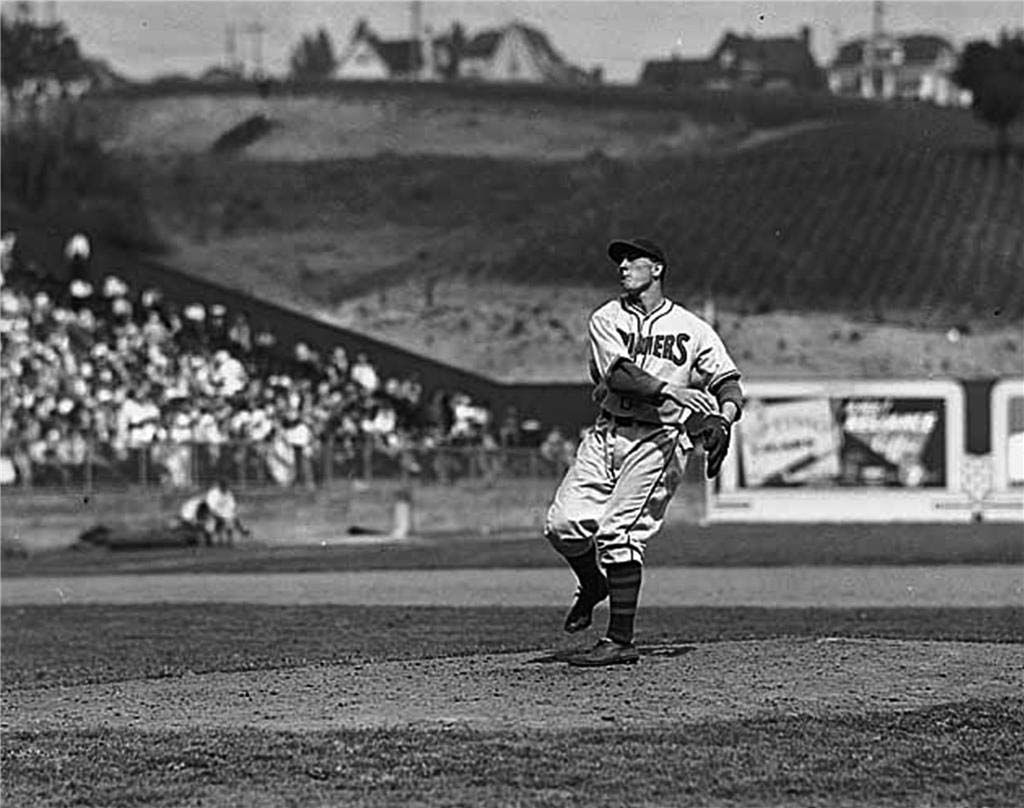 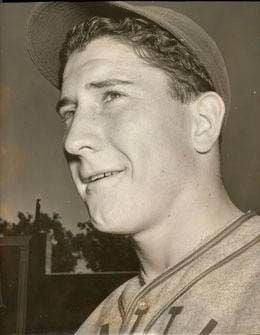 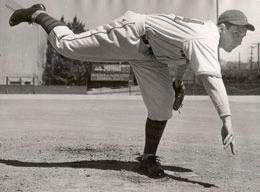 (Editor’s Note: This is part one of a two-part series looking at the life of Washington sports legend Fred Hutchinson)

Frederick Charles “Hutch” Hutchinson is Seattle’s most venerated sports figure, the first to attain national eminence and a true hometown hero, celebrated for his exploits on the field and his courage and class off. He came from a baseball-devoted family, in comfortable circumstances, a standout from his first days on the Rainier Beach sandlots. He starred as a catcher, pitcher and fielder at Franklin High School, in semi-pro ball and with the Seattle Rainiers minor league team. He pitched for the Detroit Tigers in a 10-year career that was interrupted by service in the U.S. Navy in World War II. He went on to managerships that included the Tigers, St. Louis Cardinals, and Cincinnati Reds. His 1961 Reds won the National League pennant, but lost the World Series 4-1 to a powerhouse New York Yankees team. The Reds were contending again in 1964 when Hutchinson was diagnosed with lung cancer. He died on Nov. 12, 1964, at age 45. He won many honors during his career. In 2000, the Seattle Post-Intelligencer named him Seattle’s Athlete for the Century. The Hutch Award, created in 1965, is one of Major League Baseball’s top three humanitarian awards. The Fred Hutchinson Cancer Research Center in Seattle, a world-renowned research facility, is the legacy of his older brother and mentor, Dr. William B. Hutchinson (1909-1997).

Fred Hutchinson was born in Seattle on Aug. 12, 1919, the third son of Dr. Joseph Lambert Hutchinson and Nona (Burke) Hutchinson. Joseph was born in Maple Grove, Wisconsin, in 1873. Nona Burke was born in Peshtigo Harbor, Wisconsin, in 1878. They emigrated in 1907 to the Rainier Beach area in southeast Seattle, where Joseph set up a storefront medical practice and also performed surgeries at First Hill hospitals. “Most of his practice was dealing with people who were injured at Taylor’s Mill lumber mill at Rainier Beach, but he also took the ferry to serve patients on the Eastside,” said Marvin “Buzz” Anderson, president of the Rainier Valley Historical Society, who knew the family.

Fred’s older brothers, Bill and John, fostered his baseball skills and competitive spirit, at one point training him to bat left-handed in order to more quickly reach first base. Upon Bill’s death in 1997, Seattle Times columnist Emmett Watson said: “I remember that Dr. Bill once told me proudly, ‘I raised that kid.’” Bill and John both would go on to play baseball for the University of Washington’s legendary coach Dorsett “Tubby” Graves (1923-1946). Bill captained the 1931 team, which won the Pacific Coast Conference championship, but gave up a promising baseball career to become a physician. Still, he remained devoted to baseball, coaching his sons, nephews and others through the years. John, while attending the university, played a summer for the St. Louis Browns organization.

Fred Hutchinson came by his competitive zeal and success early. He led both Emerson and Brighton elementary schools to city championships as a catcher — the position he played until he was a sophomore in high school. He then anchored Franklin High School’s championship teams from 1934 to 1937 as a pitcher, catcher, first baseman and outfielder. In between, he played for American Legion League teams — Gibson’s Carpet Cleaners and Palace Fish — helping to take Palace Fish to the Western playoffs. He also pitched briefly in 1937 for the semi-pro Yakima Indians of the Northwest League, with a 16-2 record.

He was blessed with big hands and “beautiful control,” said J. B. Parker, who caught Hutchinson in those early years. “He wasn’t fast, but he was fast enough ... . He was probably the greatest competitor I have ever seen … His chief weapons were amazing control, a natural sinker, a short, choppy curve and a thoroughly domesticated change-of-pace.” His coolness on the mound earned him the nickname, “the Iceman,” but the anecdotes about his temper went back to his grade-school days. Paul O’Neill, Seattle newspaperman, pictured him in a Saturday Evening Post article: “His shock of brown hair, pink cheeks, and the habit of looking at batters with a blank ... expression of one who detects a slightly unsavory odor.”

Seattle Post-Intelligencer columnist Emmett Watson, in a 1957 Sports Illustrated article, characterized Hutchinson as possessing a “face that might have been hacked out by an angry sculptor with a dull chisel.”

Emil Sick, owner of the Rainier Brewing Co., had bought the financially strapped Seattle Indians baseball team in 1937, apparently intrigued by the success of another brewery magnate, Jacob Ruppert (1867-1939), who had turned the New York Yankees into baseball’s storied powerhouse of the 1920s and 1930s. Sick renamed the team the “Rainiers” to promote his beer, and hired Roscoe C. “Torchy” Torrance (1899-1990), a Seattle sportsman-businessman, to run the club. Among Torchy’s new hires was Hutchinson, for $2,500 and 20 percent of whatever his future selling price might be. Brother John helped negotiate the contract and the 20 percent clause, said Fred Hutchinson’s widow, Patsy. Sick also built Sicks’ Stadium, a $500,000, 14,600-seat, state-of-the-art facility at Rainier Avenue and McClellan Street, “with his own cash ... . He did not ask the taxpayers for a penny” (Watson).

Hutchinson was an instant hero on the mound and at the plate, and began generated banner headlines from his first game. On August 12, 1938, Hutchinson celebrated his 19th birthday by beating the San Francisco Seals, 3-2, for his 19th Pacific Coast League victory. An overflow crowd of 16,354 jammed Sicks’ Stadium for the game. The event topped Seattle Times sports writer Dick Rockne’s list of “Seattle’s Top 10 Greatest Moments” in sports on December 26, 1999. Hutch went on to compile a sensational 25-7 record with a 2.48 earned run average, pitching 29 complete games, while batting .313. He was the league’s star attraction, helped Seattle draw a league-leading 437,161 fans, and was named the league’s most valuable player. Sporting News named him the outstanding minor league Player of Year.

An Associated Press story in the July 8, 1938, Milwaukee Journal called Hutchinson the “’find’ of the season” and several major-league teams, including the Yankees, Pittsburgh Pirates, Chicago Cubs, Boston Red Sox, and Detroit Tigers were interested in acquiring him. When the Yankees’ Ruppert inquired, Sick asked for an unheard-of $250,000 and 10 players. On December 12, 1938, Hutchinson finally was traded to the Detroit Tigers for $50,000 and four players, the biggest deal for a minor leaguer in 10 years. The trade gave the Rainiers a solid talent base and they won Pacific Coast League pennants in 1939, 1940, and 1941. Rainier fever gripped Seattle, they drew record crowds, and it was part of Hutch’s first legacy to his hometown.

Hutchinson attended the University of Washington for less than a semester in 1938.

His major league pitching debut was inauspicious, but it also was “one for the ages” for baseball historians (Eals). It took place on May 2, 1939, when the New York Yankees were in Detroit on their first road trip, the day that baseball immortal Lou Gehrig (1903-1941) benched himself, ending his consecutive-game string of 2‚130, a record that stood until 1995. Hutchinson was called in as a reliever and gave up eight runs in two-thirds of an inning, giving up four hits and walking five, as the inspired Yankees demolished Detroit 22-2. Hutchinson was immediately sent down to Detroit’s AA farm club, the Toledo Mud Hens. He bounced back, then in 1941 was sent down to the Buffalo Bisons, where he had a stellar season: a 26-7 record on the mound, a .385 batting average, and he earned International League Most Valuable Player.

World War II interrupted Hutchinson’s career, as it did for many major leaguers, to say nothing of millions of other Americans. He joined the Navy for a four-year tour on October 24, 1941, to avoid being drafted into the Army, and became part of the Navy’s physical education program being organized by Lieutenant Commander Gene Tunney (1898-1978), onetime world heavyweight boxing champion. He was a chief petty officer during his tour of duty. He had some hunting experience and for a while was a shooting range instructor at Norfolk Naval Training Station, Virginia, but playing baseball (and some basketball) remained his primary contribution.

In 1943, he married a Franklin High classmate, Patsy Finley, in St. Augustine, Florida, where she was stationed as a member of the Women’s Army Auxiliary Corps, later known as the Women’s Army Corps (W.A.C.). She left the service, but their military life was a nomadic precursor of their baseball years, taking them from Norfolk to Idaho to Sand Point Naval Air Station in Seattle. Hutchinson then was shipped to Hawaii, without Patsy. They would have four children: Fred Jr. (“Rick”), born in 1944; John (“Jack”), 1945; Patty Jo, 1948, and Joseph, 1953.

Hutchinson was discharged from the Navy in 1946 and rejoined the Tigers, earning a spot in a powerful starting rotation that included Paul (“Dizzy”) Trout (1915-1972), Hal Newhouser (1921-1998), and Virgil (“Fire”) Trucks (b. 1917). Hutchinson compiled an 87-57 record with Detroit from 1946 to 1951. He also was an excellent hitter, especially for a pitcher, and often pinch-hit. He appeared in the 1951 All-Star game, with “Lyall Smith of the Detroit Free Presstagging him ‘baseball’s most amazing modern pitching personage’ “ (Eals). On a less inspirational note, he gave up Ted Williams’s longest career homer, a 502-foot shot at Fenway Park, in 1946. The seat where the ball landed was painted red.

Hutchinson was well-regarded by his teammates, who elected him player representative in 1947. The next year he was elected the American League’s player representative, a post he held until 1952, when he became a manager. “[H]e helped secure from owners a $25-per-week spring training expense fund, a $5,000 minimum salary, and designation of radio and TV All-Star Game and World Series proceeds to the players’ pension fund” (Eals). In 1951, he testified before U.S. House of Representatives hearings on baseball’s reserve clause, which gave a team the unilateral right of contract renewal. Hutchinson testified that the clause was “a necessary and reasonable provision for the preservation of organized baseball,” and that the players supported it. That wasn’t the case for all of them, however, and the clause was overturned in the early 1970s.

In July 1952, Detroit was in the American League cellar, and Hutchinson, 32, was struggling with arm trouble and a 2-1 record. The Tigers ownership tapped him as manager, replacing Robert (“Red”) Rolfe (1908-1969). He led the team to sixth- and fifth-place finishes in the next two seasons, occasionally pitching or pinch-hitting, but quit after the 1954 season because the team would give him only a one-year contract. Al Kaline (b. 1934), the Tigers’ Hall of Fame outfielder, said, “He wanted his teams to be competitive and not embarrass themselves when they play ... . He was an up-front type guy” (Eals).