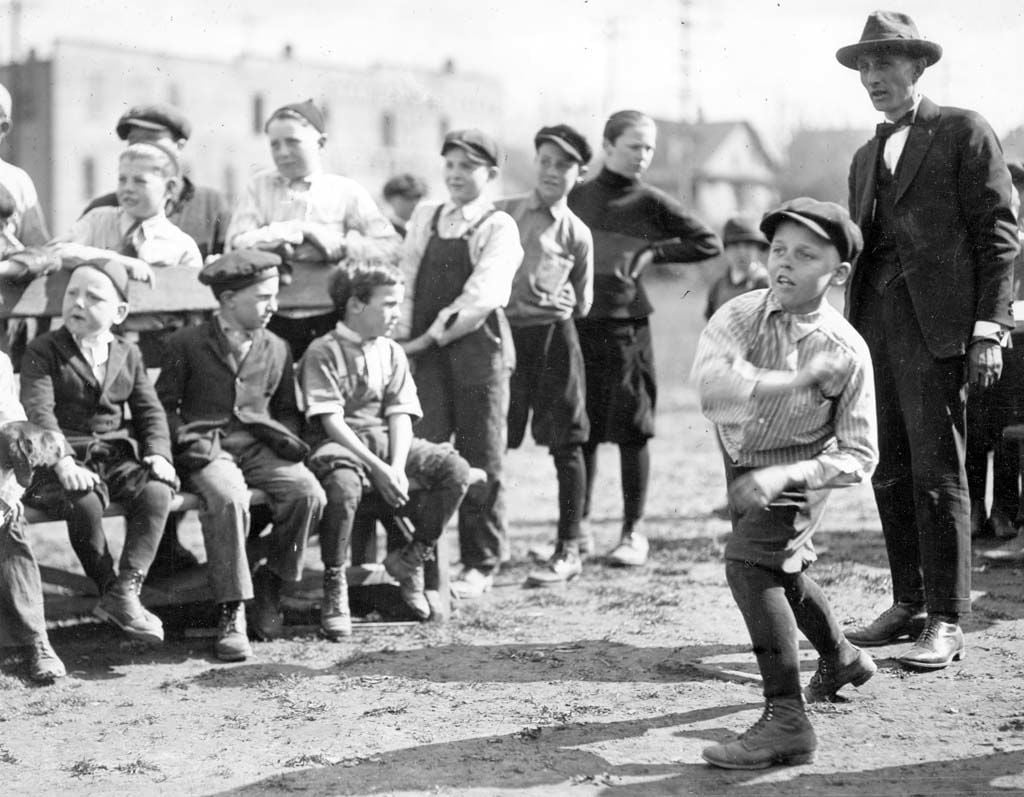 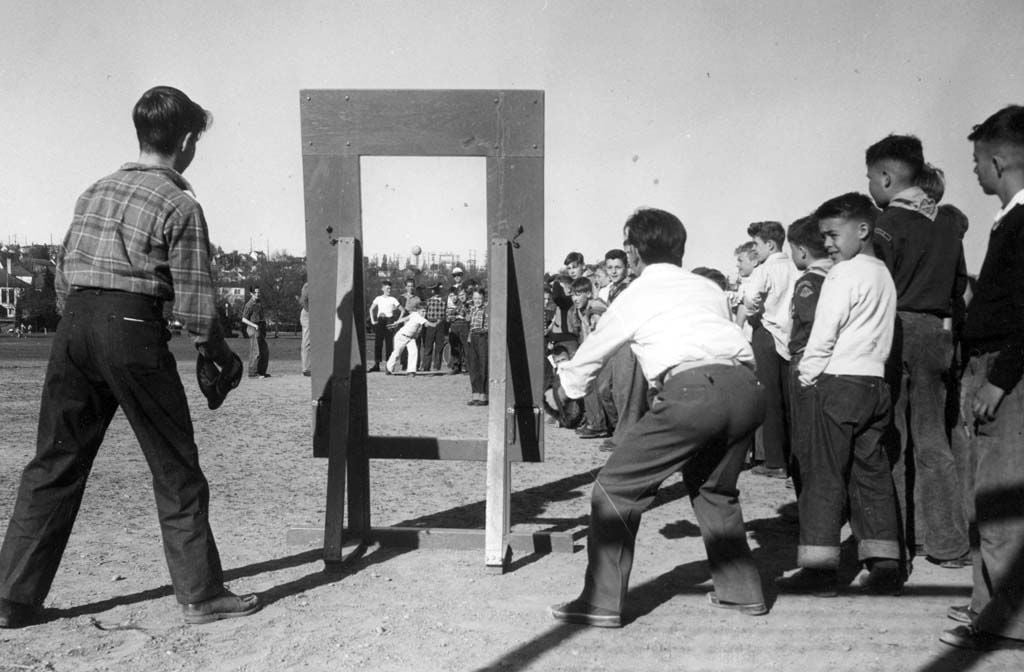 Seattle Times Pitcher's Contest and Old Woody in the 1930s. 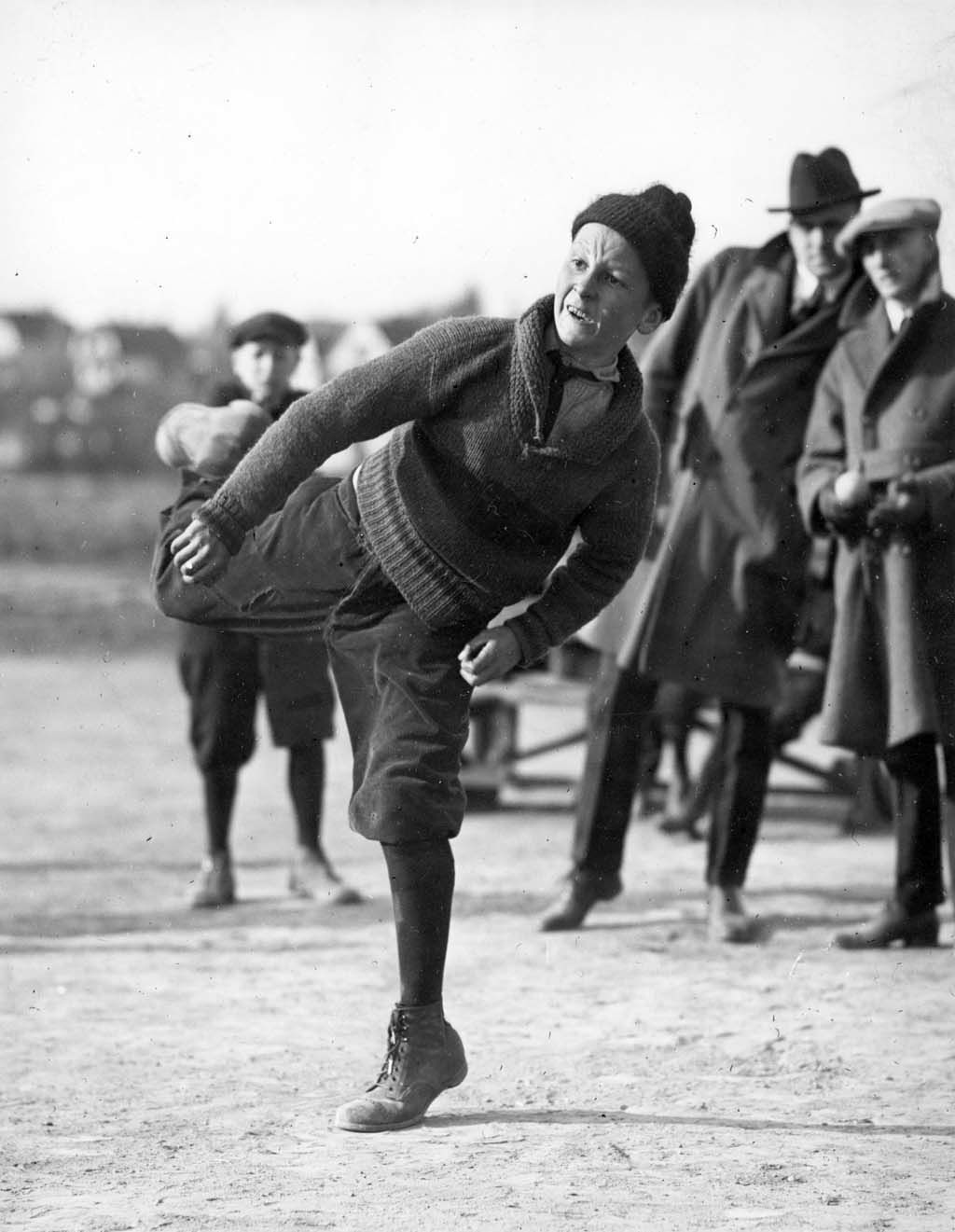 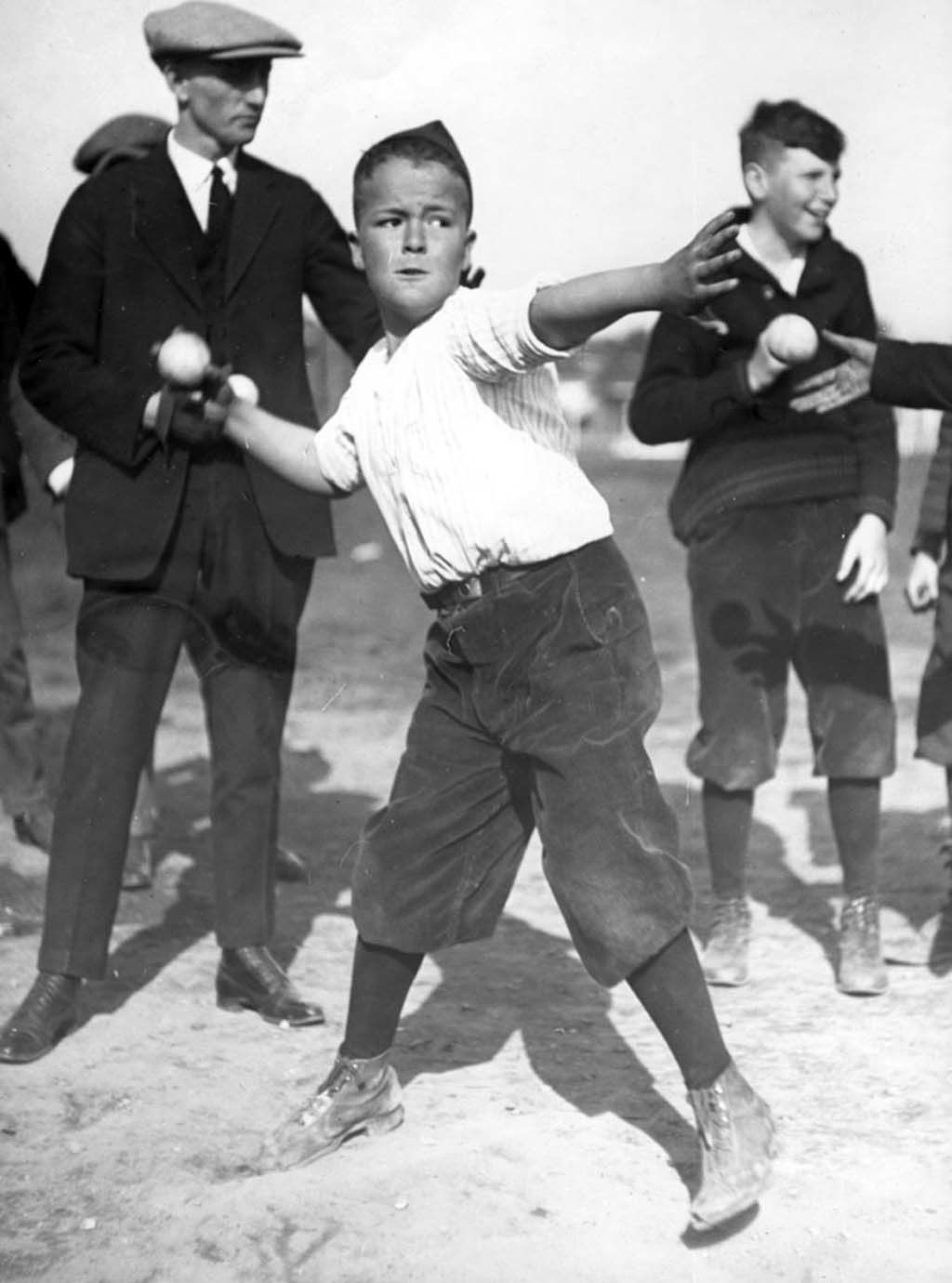 A contestant in the Seattle Times’ pitching contest makes a throw in 1923. 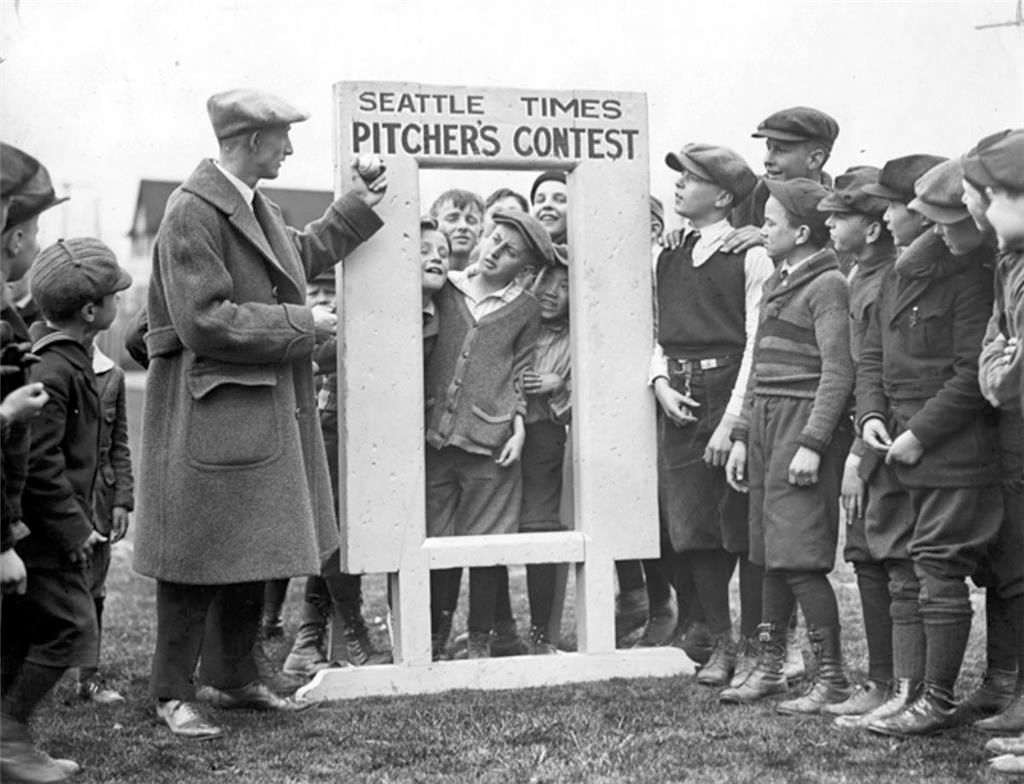 Ben Evans, Seattle Director of Playgrounds, with Old Woody, a strike zone target, during the Seattle Times Pitcher's Contest at Rogers Playfield in 1924.

(Editor’s Note: This story was originally published in 2001.)

Elmer Yates, born in 1917, was raised in the Rainier Valley and attended Franklin High School. He went to sea and became a ship's captain. In 1996, he wrote to the Rainier Valley Historical Society from his home in Tampa, Florida, about The Seattle Times Pitcher's Contest and "Old Woodenface."

"The other day I was trying to recall the beginning of my avid Interest in baseball. I think that I may have found the answer while perusing the many items handed down to me by my mother Lou I. Yates who (was) 95 years of age when she passed away in 1970. During her life she saved every newspaper item concerning any of her children, grandchildren or great-grandchildren. It was one of these articles that jogged my memory about an unforgettable incident which happened 70 years ago when I was 10 years old.

"In 1927, The Seattle Times was conducting their Seventh Annual Boy Pitchers Contest. Those in charge of the contest would transport "Old Woodenface" from one playfield to another throughout the city of Seattle where boys 13 years and younger would compete in pitching contest. The winning pitcher of each playfield would have the privilege of representing his playfield in the city finals.

"Old Woodenface was a wooden frame built to conform to the batter's strike zone. The frame was placed at home plate and the boys would throw the baseball from the pitcher's mound. To get credit for a strikeout, the pitcher had to throw three strikes through the frame before he walked the phantom batter by throwing four balls which failed to pass through the frame.

"I was 10 years old in 1927 when Old Woodenface was brought to the Columbia Playfield for the local competition. I had gone to the playfield to watch the contest without any idea of entering it. One boy, Lloyd Fowler, had thrown 10 strikeouts early in the competition to lead all participants. Many of the pitchers failed to get a single shakeout while others would get as many as three or four before walking a man and thus be eliminated.

"A number of my schoolmates urged me to try my luck, not that they thought I had a chance of winning. After some encouraging words from one of the men conducting the contest, I took my turn on the pitcher's mound. I began pitching and to my surprise was getting more balls through the frame for strikeouts than I had ever imagined was possible. Each strikeout brought cheers from my friends and also bolstered my confidence. I managed to get a total of six strikeouts before throwing four balls allowing a walk. Those six strikeouts gave me second place as a runner-up to Lloyd Powler's 10 winning strikeouts.

"Generally, only the winner's picture was taken and would appear in the paper the following day, but to my astonishment on that day, I was called over by the contest supervisor and told to stand next to the winner in front of Old Woodenface. After the picture had been taken, I headed for home as fast as my legs could carry me to tell mother about my accomplishment. It was one of the happiest of my life and that which made so wonderful was the enthusiasm shown by my mother and dad along with the rest of the family.

"It was this newspaper picture, saved by my mother, although yellow with the aging process of 70 years, that brought back pleasant childhood memories. The item accompanying the picture reads, "Lloyd Fowler, 12 years, 7803 Empire Way who yesterday captured the pitching honors of Columbia Playfield by striking out Old Woodenface ten times had difficulties to overcome, not the least of them being Elmer Yates, 10, of 4125- 39th Ave, S who with 6 strikeouts promised for a time to menace the glory of the champ. As it was, however, Elmer retired from the box as the closest runner-up on the field where 105 lads tried like everything."

"Although I tried for the next two years to win the first place title at the Columbia Playfield, I failed and it wasn't until 1930 that I succeeded in coming in first during my last year of eligibility. Winning the local playfield contest entitled me to compete for the city championship with all the first place winners from the various Seattle playfields.

"The day of the Old Woodenface pitching finals proved a busy one for all the participants. The first place winners were honored guests at the Seattle Elks Club and we were given the royal treatment by members of the Elks. A swimming party preceded an elaborate banquet and following the banquet, each of us received a ribbon with a little silver baseball attached to it in honor of being champion of the field which we represented. Thanks to my mothers saving habits, I still have the award with the inscription "Old Woodenface 1930" on the little silver baseball.

"After the awards ceremony at the Elks Club, we were loaded in limousines and transported to Dugdale Park (home of the Seattle Indians) in Rainier Valley where the final pitching contest was held. I failed to get a strikeout this (time) being eliminated early in the competition. I remember a boy from Rainier Beach named John Murphy won first place gold medal with an outstanding record of 27 strikeouts. A couple of years later, John and I attended Franklin High School, where we got to be very good friends.

"I recollect all the happenings of that marvelous day in 1930 — the swimming party, the banquet, receiving the district champion award, the limousine ride, city final pitching contest, and the free Seattle Indians baseball game. I never could have enjoyed the above events if I had not won first place at the Columbia Playfield in 1930, but if I had to make a choice between my two Old Woodenface experiences at the age of 10 and 13, I would choose my 1927 second place finish over the first place of 1930.

"I have only the time worn 70 year old picture to look at to remind me of that eventful day in 1927. I was dressed in knickers, long stockings, a yellow, and black sweater and my cap was angled off the side of my head, but the most important thing in the picture is the big smile on my face. Without a doubt, that was one of the most memorable days of my life."