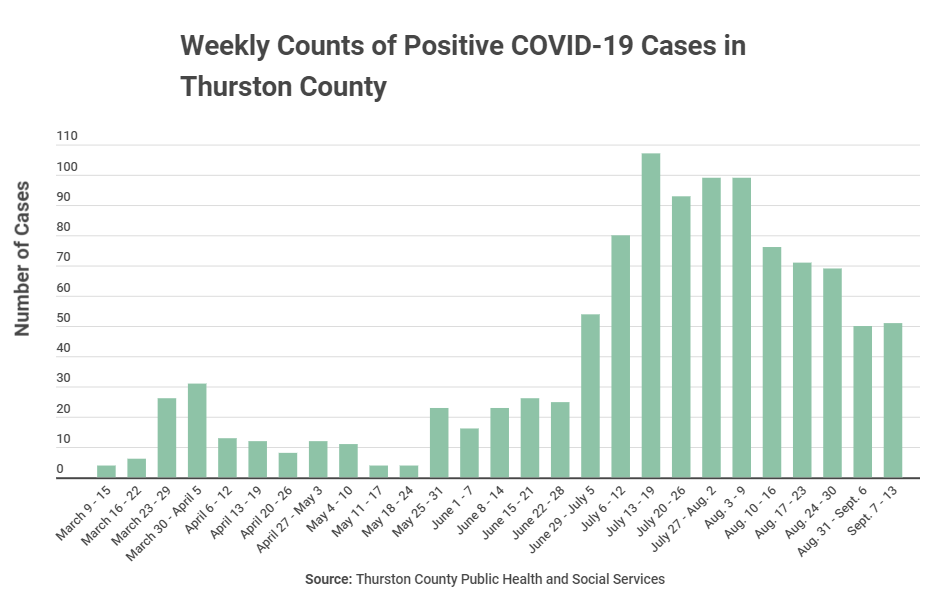 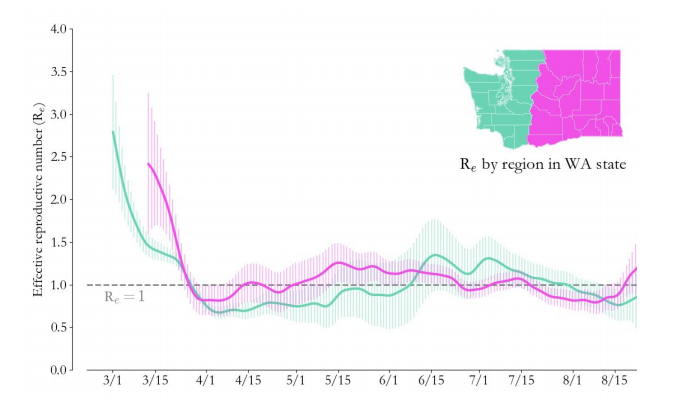 Thurston County Public Health and Social Services reported 51 cases of COVID-19 the week of Sept. 7 to 13.

This is the second week in a row the county has reported around 50 diagnoses, which is about half of what the county reported six weeks ago.

Daily case counts also remain fairly low. As of Tuesday morning, Sept. 15, the county reported an average of about 6.7 new cases per day over the last two weeks.

This comes as COVID-19 activity also declines statewide. On Friday, Sept. 11, the state Department of Health published a statewide situation report reflecting data as of Aug. 28 that showed cases were decreasing in both eastern and western Washington, likely due to people keeping their distance, limiting gatherings and wearing face coverings to slow the spread of the virus.

“While we see some encouraging trends in case counts, the risk remains extremely high throughout the state,” Secretary of Health John Wiesman said in a prepared statement.

The Department of Health’s situation report suggests the effective reproductive number, which is used to measure the transmission of the disease, is estimated to be slightly below 1 in Western Washington and likely above 1 in Eastern Washington. The goal is to be below that benchmark.

“Case counts in both eastern and western Washington have declined substantially since the start of August,” the report reads. “These decreases are occurring across all age groups. Hospitalizations and deaths, which generally lag trends in cases, are also starting to show substantial decreases. Case counts in individual counties have generally followed these same trends, especially in areas that were previously hotspots.”

The total number of COVID-19 cases in Thurston County stands at about 1,095, as of Tuesday morning deadline. Over the last seven days, three county residents were hospitalized and no deaths were reported.

The last COVID-related death in the county was reported almost two weeks ago.

The test-positive rate in the county the week of Sept. 7 to 13 stood at about 2 percent.

A total 100 cases of COVID-19 had been reported in the Yelm ZIP code.

Here are some additional numbers related to the coronavirus situation, both regionally and nationally, that were reported Tuesday morning:

• Tacoma-Pierce County Health Department reported 20 new cases Monday, bringing the total since the start of the pandemic to 7,200. No new deaths were reported, though the total number of deaths caused by COVID-19 in Pierce County stands at 160. The average number of cases per day over the last two weeks stands at about 36.9.

• The total number of cases in Washington stands at 80,138, according to numbers updated Sunday night on the Department of Health’s website. The state has recorded a total 7,098 hospitalizations and 2,006 deaths. The number of tests conducted statewide stands at 1,653,967. The percentage of deaths over confirmed cases stands at 2.5 percent.

• Nationwide, a total 6,503,030 total cases have been reported, according to the Centers for Disease Control and Prevention. There have been approximately 193,705 coronavirus-related deaths recorded.