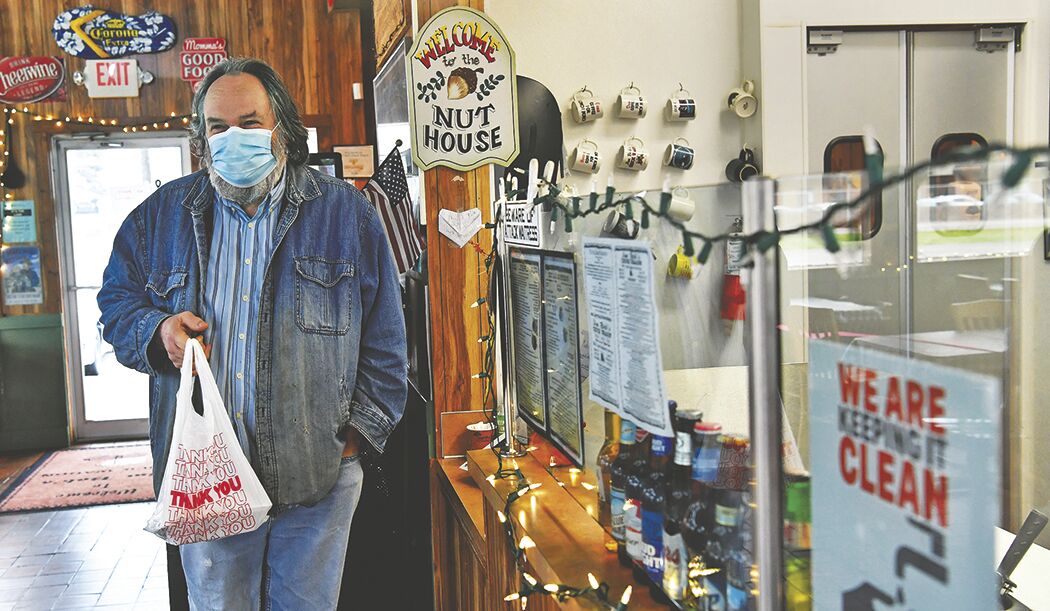 Roy resident Fred Kistenmacher gets ready to head outside on Tuesday, Nov. 24, after picking up a take-out lunch at Jim Bob's Chuck Wagon restaurant in Roy. 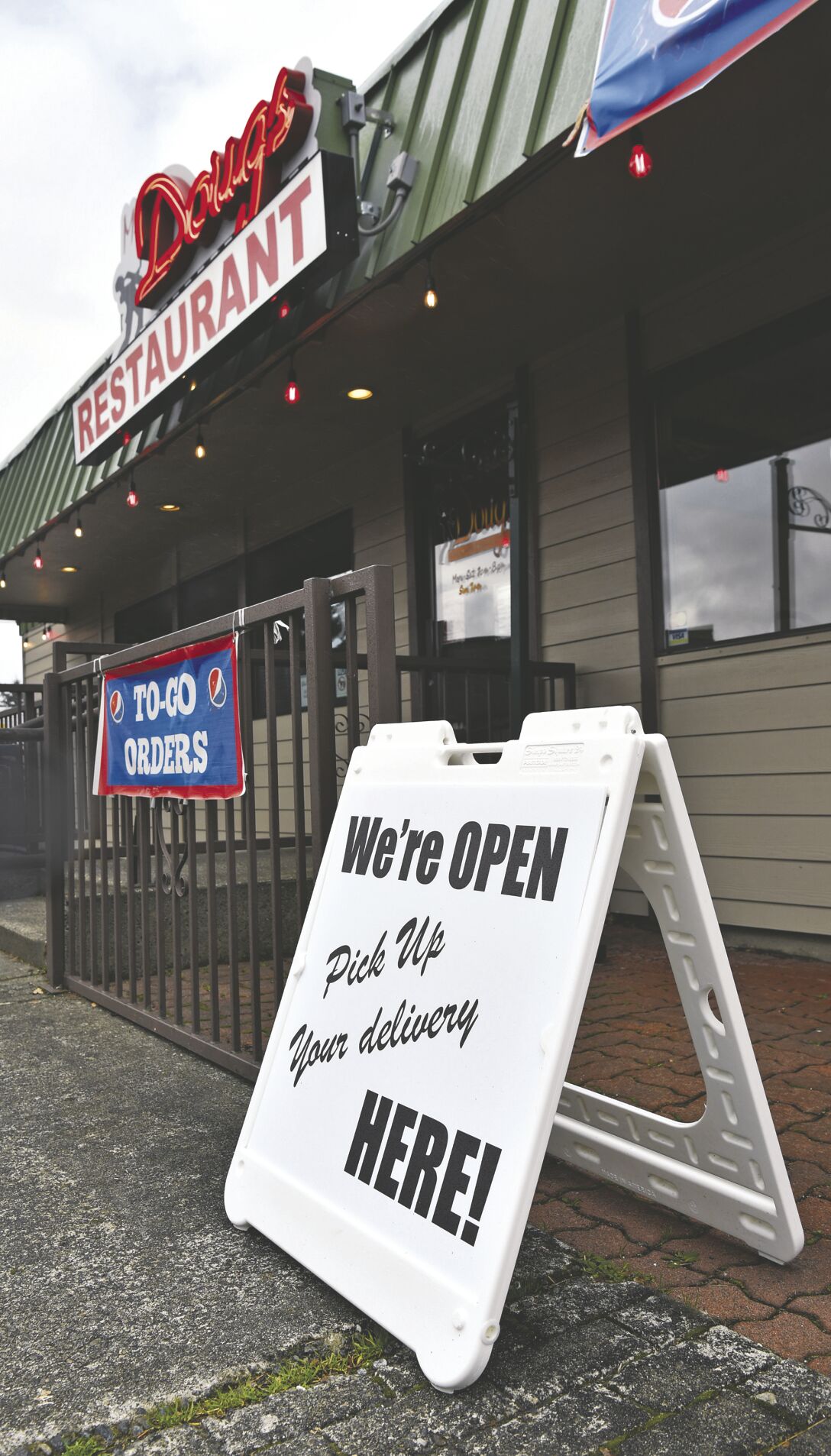 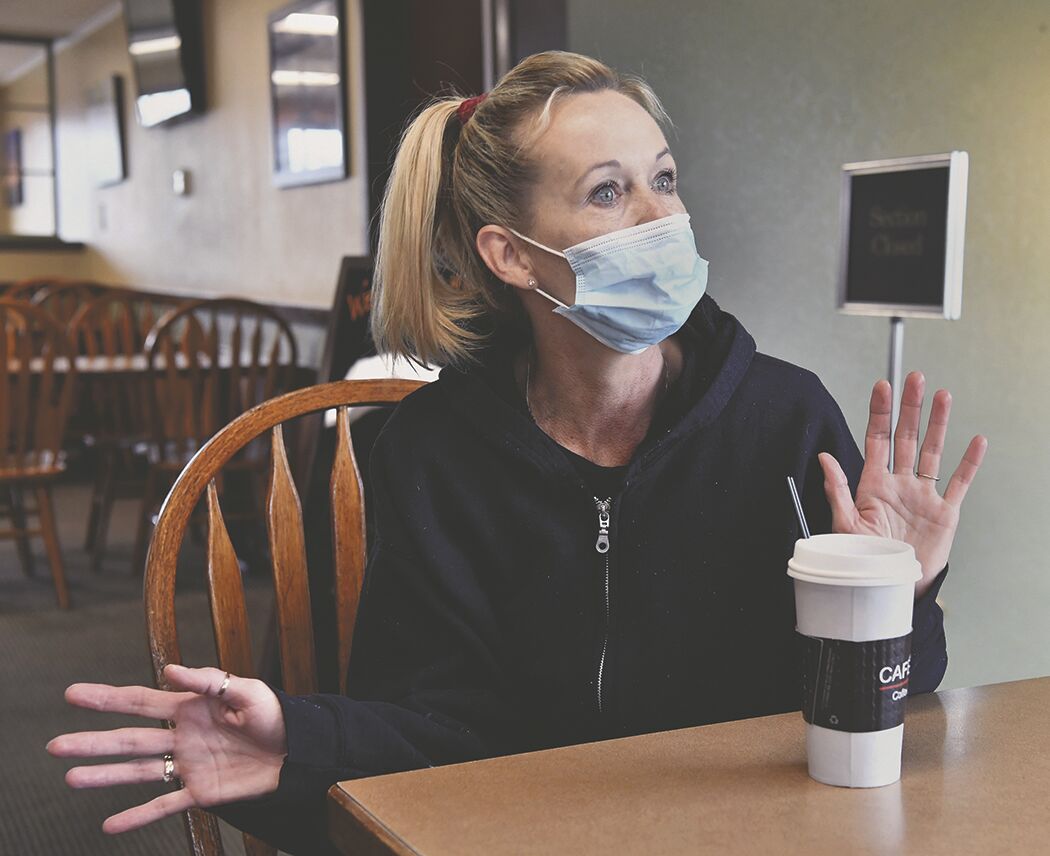 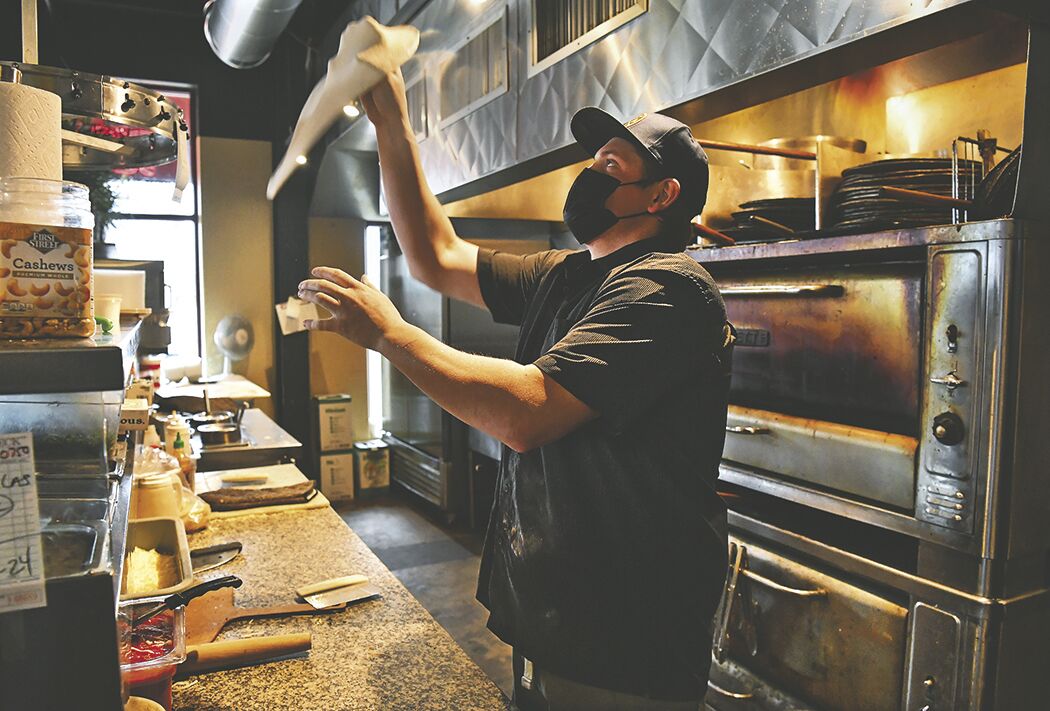 Shane Cole-Curran, 29, a cook at Casa Mia Italian Restaurant in Yelm, flips pizza dough to get ready for a lunch order on Tuesday, Nov. 24. 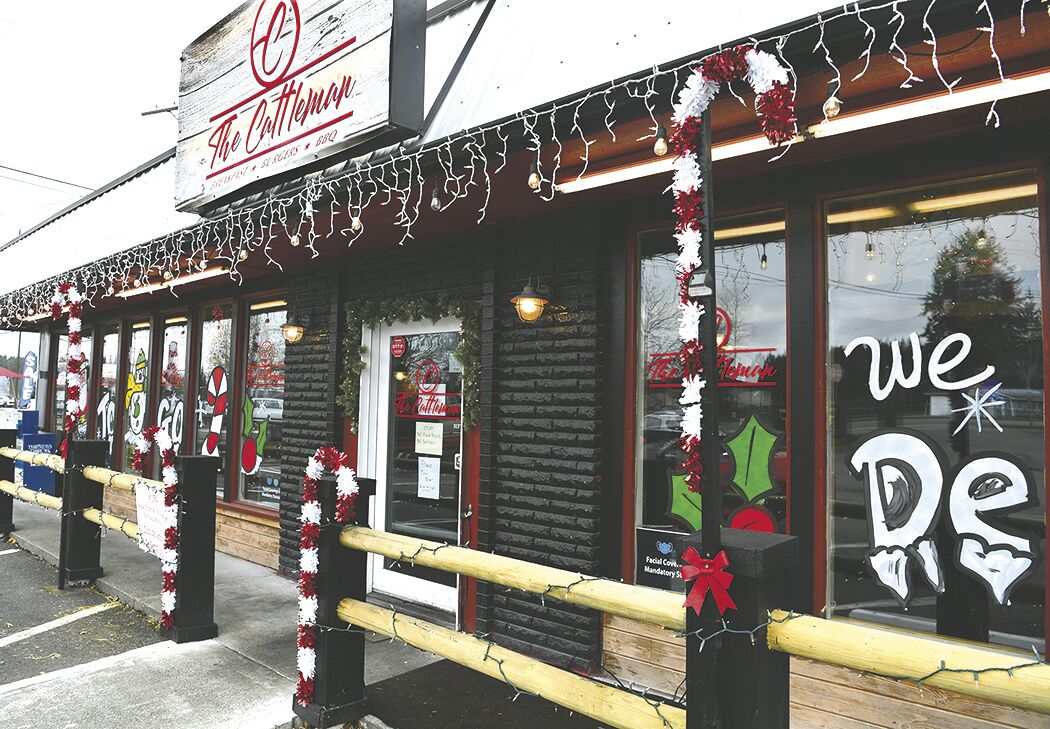 The Cattleman restaurant in Yelm is decked out for the holidays on Tuesday, Nov. 24. 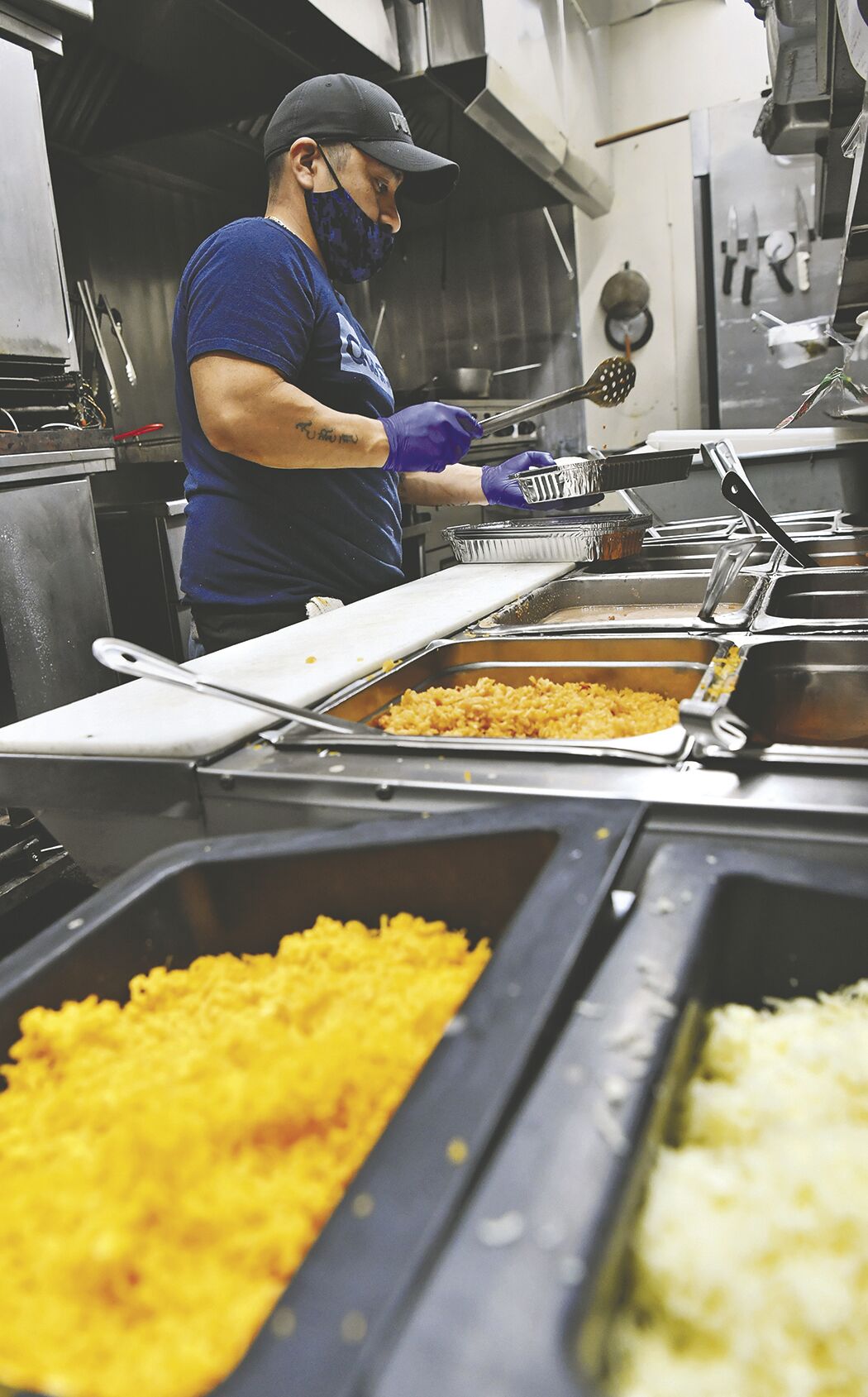 On an average weekday morning, Mr. Dougs Restaurant would usually be bustling with an assortment of retirees, churchgoers and regular weekday breakfast diners.

But that wasn’t the case on a recent brisk Tuesday morning, and it really hasn’t been since COVID-19 first forced state-mandated closures of businesses in March.

The slow waxing and waning of state mandates, and a general sense of uncertainty throughout the last eight months, is enough to drive any restaurateur mad. But for Dennise Butler, co-owner, waitress and cook at Mr. Dougs, it seems to be the connections to her regulars that she’s missing out on more than anything.

“We don’t really realize we miss them until we see them,” Butler told the Nisqually Valley News on Nov. 24 from their empty front house. “I don’t know how much more I can handle of this.”

The week before, on Sunday, Nov. 15, Gov. Jay Inslee announced additional business and gathering restrictions set to last four weeks in an attempt to further curb the spread of the novel coronavirus.

The new restrictions seemed to affect restaurants and bars the harshest. According to Inslee’s proclamation, eating and drinking establishments must close off their indoor dining services for the next month, though outdoor and to-go services are permitted.

Those restrictions went into effect Nov. 18.

Since the pandemic hit, Mr. Dougs has had to scale back its crew due to the dwindling number of food orders, Butler said. But this most recent round of restrictions for businesses bring with it an unfamiliar level of slowness that Butler says she hasn’t seen before.

It’s especially hard to digest their hampered rate of business when lines at local fast food establishments are filling up everyday at noon. One of them, Burger King, can be seen from their dining area.

“It really sucks to sit here and see Burger King so busy,” Butler said, noting that the quality of Mr. Dougs food is much better than what residents can find at fast food establishments.

The price for their hearty breakfast and lunch meals — which include classics such as chicken-fried steak and homemade prime rib sandwich — isn’t a far jump either.

In an effort to stay afloat, Mr. Dougs is also offering curbside pickup and free delivery on select days.

“This time around is not like the last time around. There isn’t funding right now. It’s a touch and go situation,” co-owner Tracey Wood said by phone. “Things are a little tense right now, and we’re just hoping this works out. One way or another, life goes on.”

Wood said their business does naturally slow down around this time of year. Some businesses are putting up tents outside in an attempt to draw out stir-crazy customers, but for Mr. Dougs that’s financially unrealistic right now, he said.

He and Butler had some funds saved up to weather the first wave of COVID-19 shutdowns, Wood said. Since then, they haven’t had the time to recoup that stash.

“My concern is reaching the end of this and continuing to be here,” he said, adding that it’s important to underscore the reality these new restrictions bring with them.

Line Critchfield, executive director of the Yelm Chamber of Commerce, said she has noticed that many diners and restaurants are pivoting toward a take-out only model. With these new regulations, she said, it’s important to continue to shop small and support local businesses and restaurants where you can.

“Business owners inherently want to work, and so with these new regulations they’re doing everything they can to make sure that is an option for them,” she said. “Coming into the holiday season, it is critical that we can support these businesses and support the people who run those businesses.”

The chamber just a week ago announced that another round of grants were available to small businesses operating within the Yelm area. Businesses can receive up to $500, and applications can be found on the chamber’s website: www.yelmchamber.com.

Miles said business has recently come to a standstill with recent state mandates. The pandemic, she said, has also shown her the best of people and the uglier side of people, working in the food industry.

Customers and business owners should try their best to “be patient, be kind” during these trying times, she said.

Diane Cole, franchise co-owner of Yelm Casa Mia, emphasized optimism with the whole situation despite the bleak uncertainty that lies ahead. This last week, she said, they had to lay off their entire front house staff, though they’re keeping their kitchen staff intact.

“Right now, I’m finding it to be slow and uncertain. Right now, we’re trying to stay optimistic,” she said.

The scenario this time around is definitely different, Cole said, especially considering her staff won’t get the additional federal unemployment aid they had received earlier this year.

There’s also the worry that there could be another wave of coronavirus restrictions that come down early next year.

“It’s a different scenario. It’s not as cheerful,” she said.