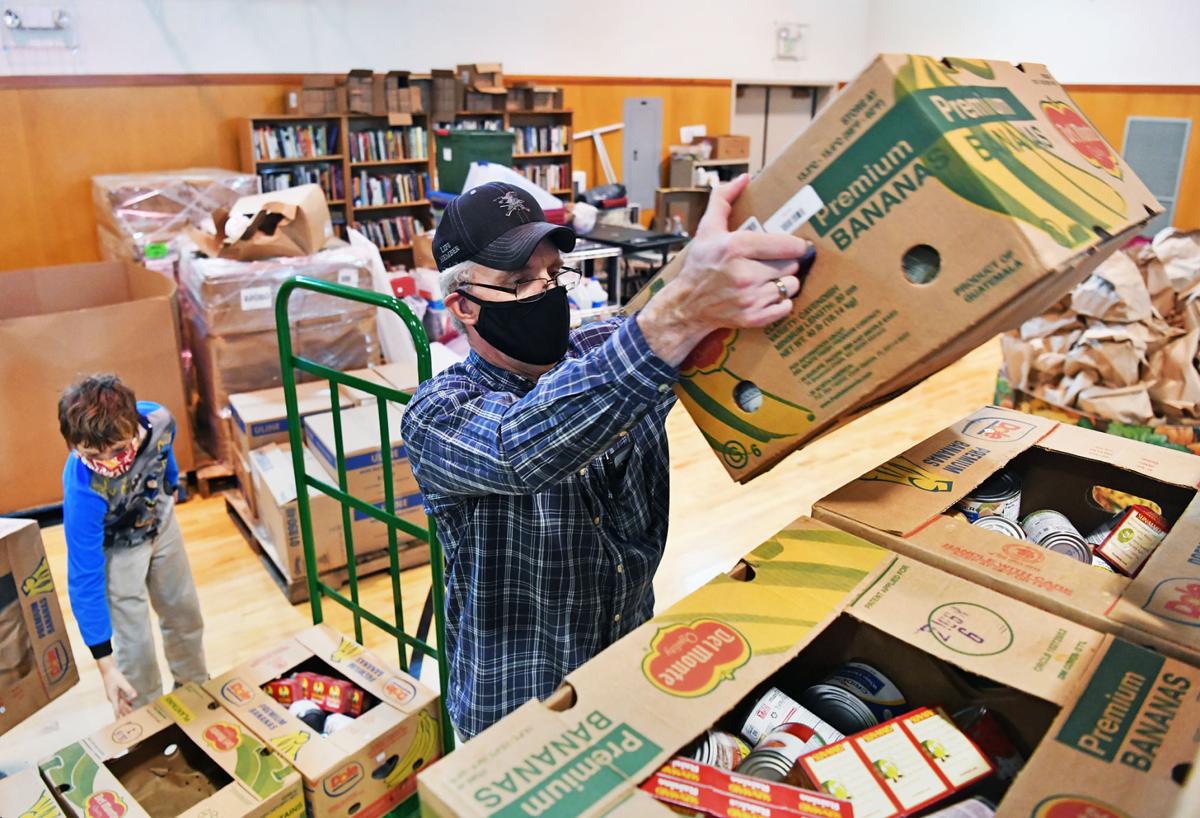 Chris Haywood, 58, a member of The Church of Jesus Christ of Latter-day Saints, stacks boxes of canned goods on Thursday, May 14, at the Yelm Community Services food bank. 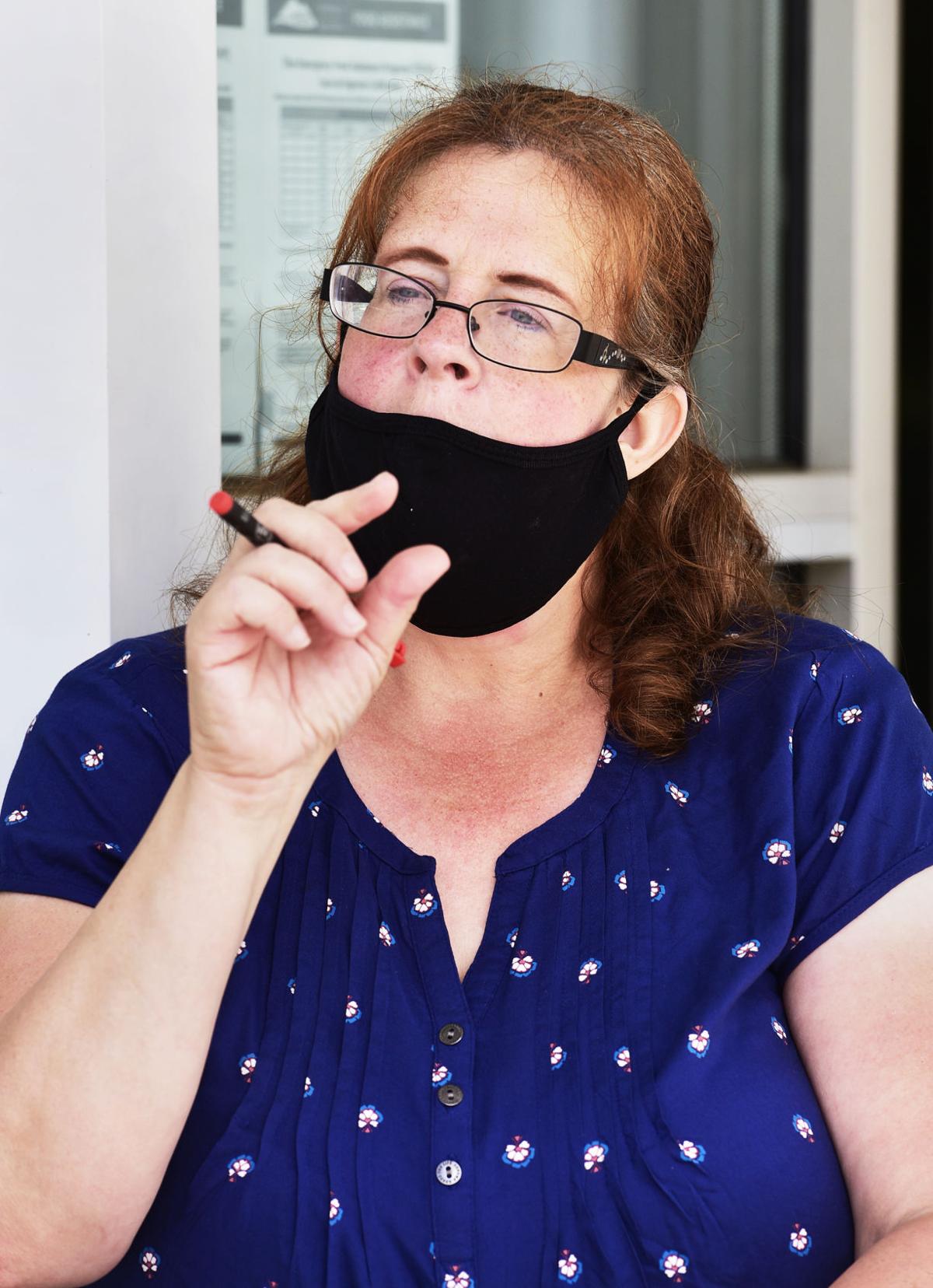 Yelm resident Anita Haywood, 50, a member of The Church of Jesus Christ of Latter-day Saints, discusses her role overseeing volunteers on Thursday, May 14, at the Yelm Community Services food bank. 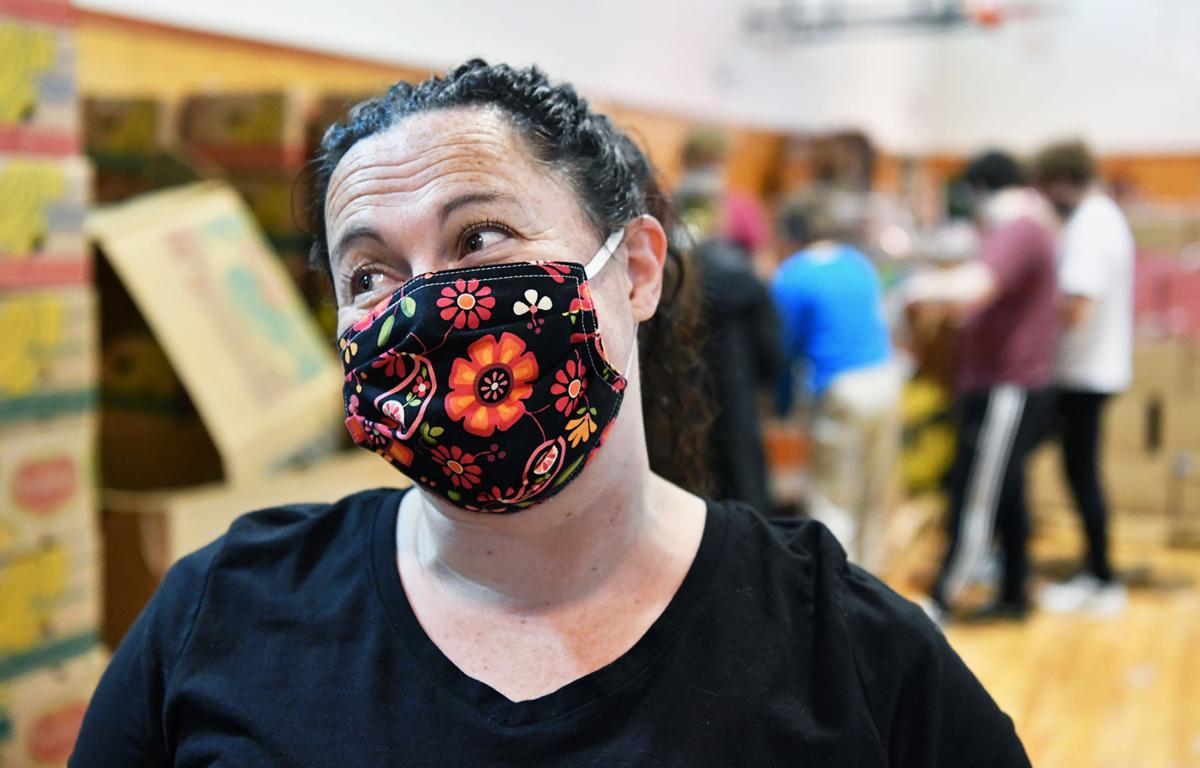 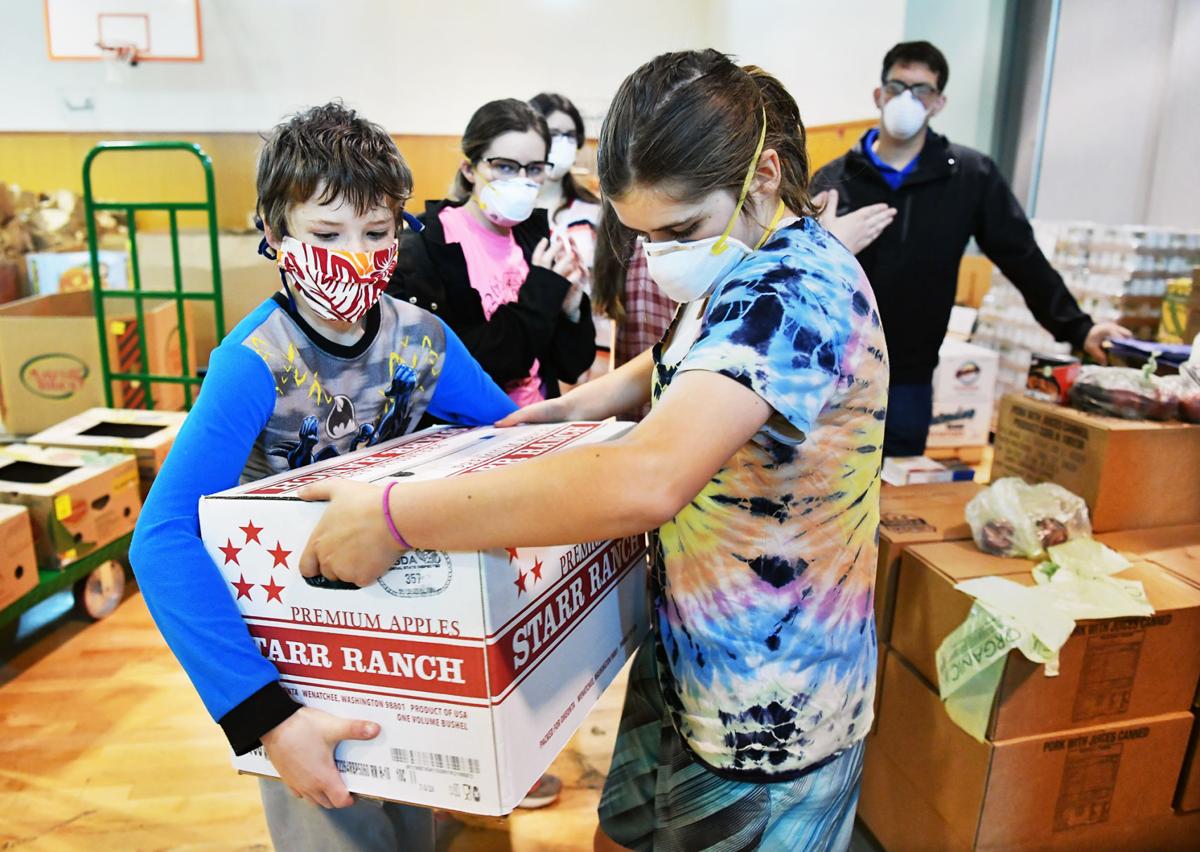 Yelm brother and sister Samuel Stamm, 10, left, and Tori Stamm, 12, carry a bag of apples to be distributed at the Yelm Community Services food bank on Thursday, May 14. 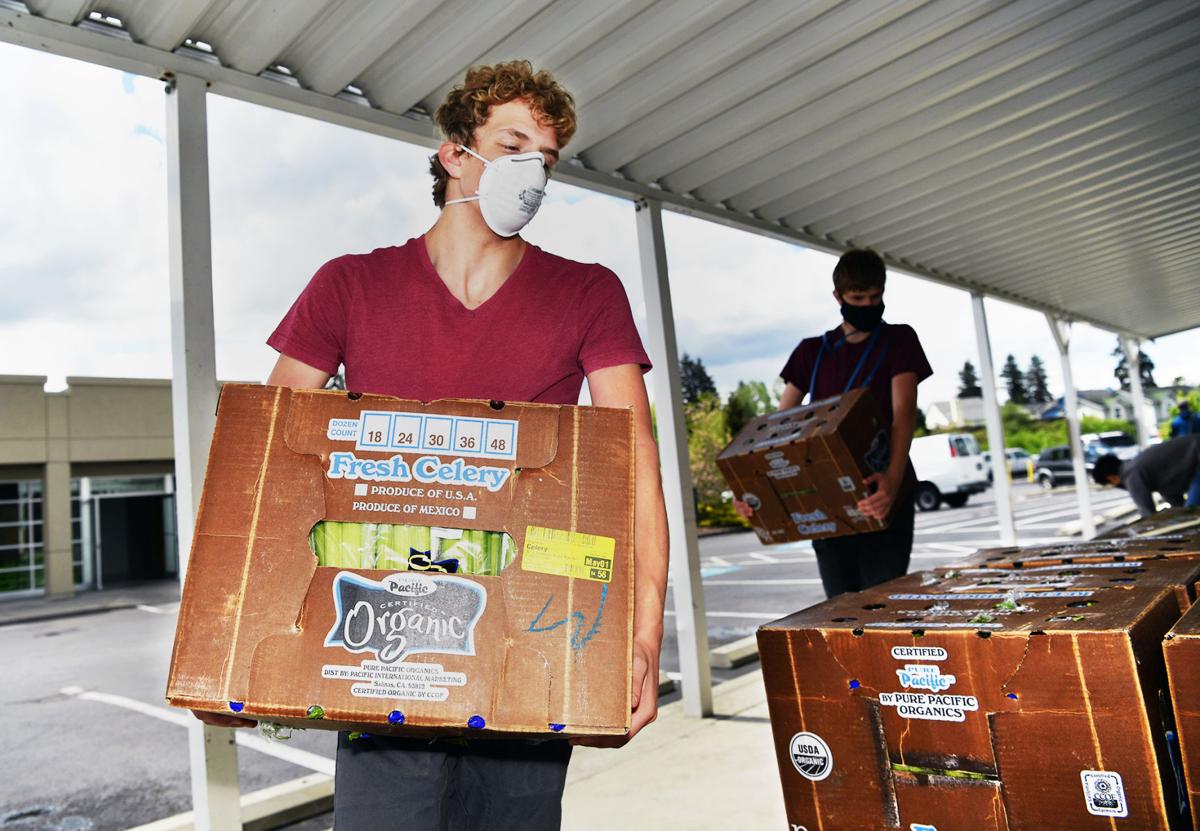 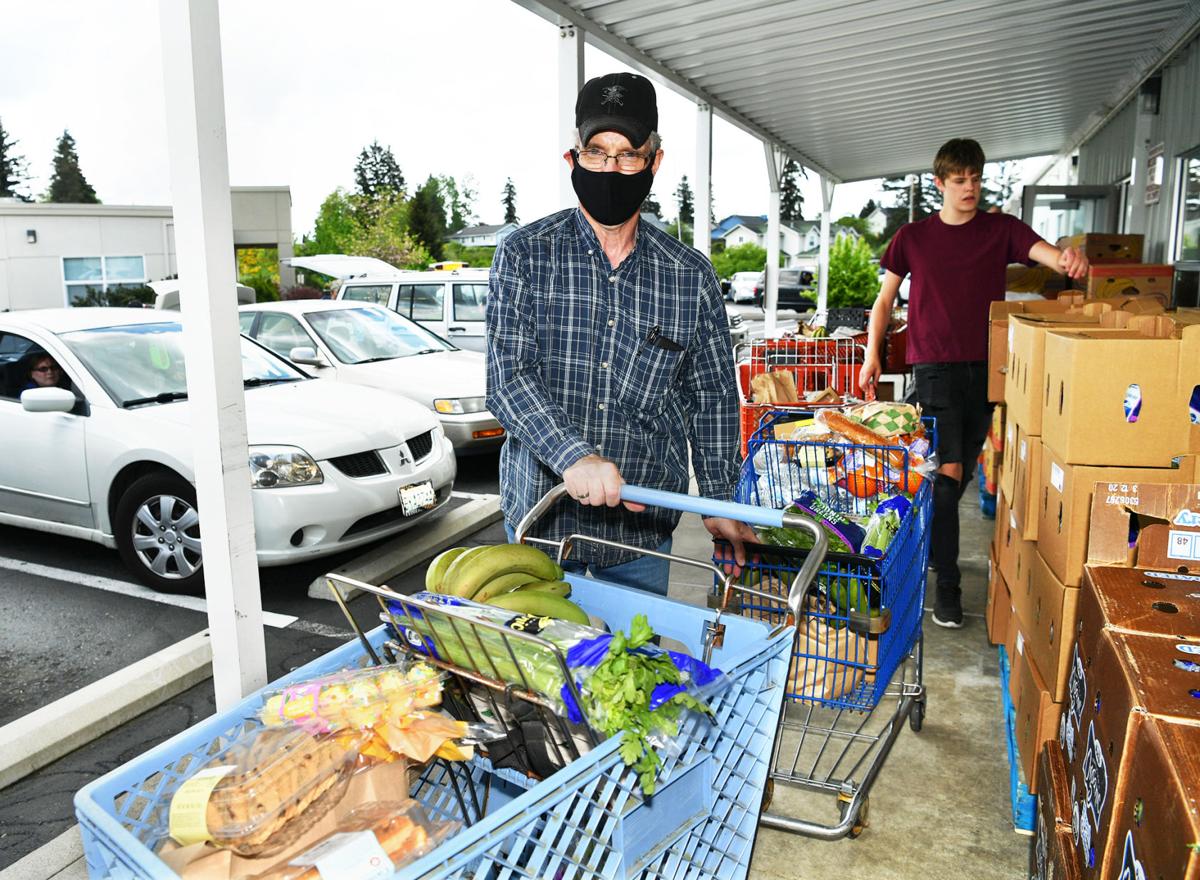 Yelm resident Chris Haywood, 58, a member of The Church of Jesus Christ of Latter-day Saints, rolls out shopping carts full of food items for patrons on Thursday, May 14, at the Yelm Community Services food bank. 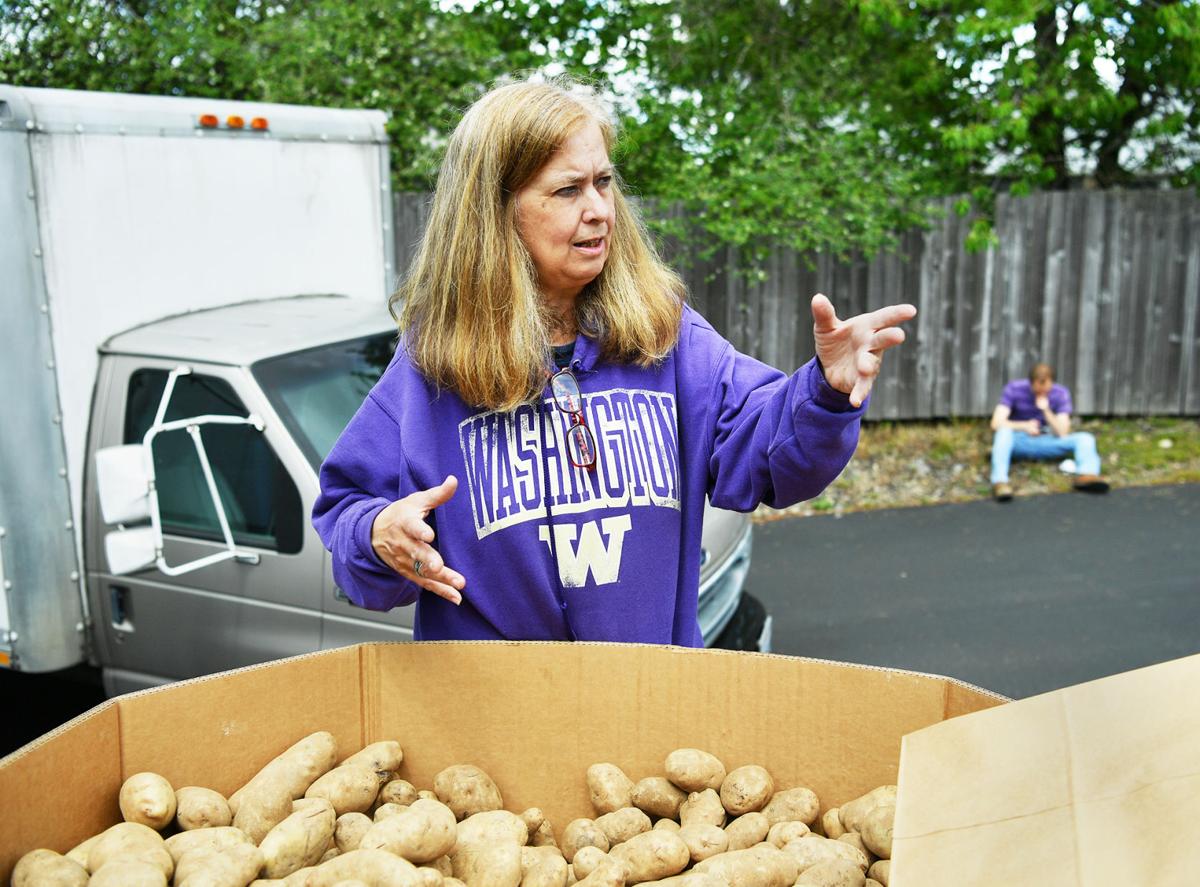 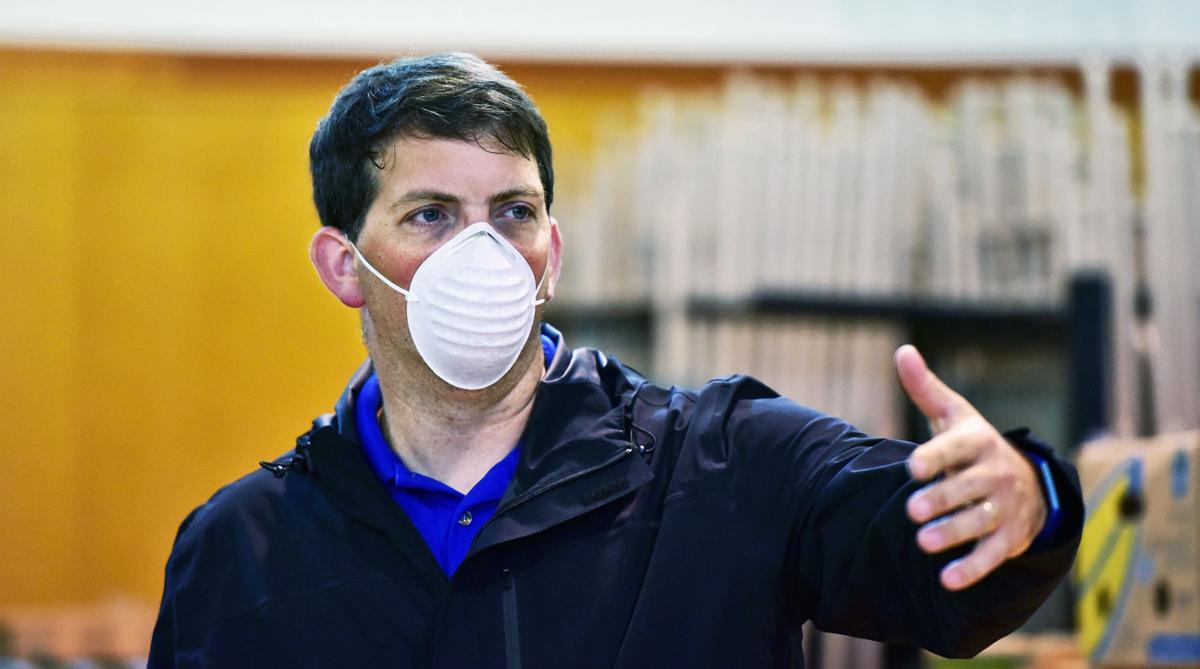 Yelm resident Adam Cornwall, 40, bishop of The Church of Jesus Christ of Latter-day Saints, oversees volunteers on Thursday, May 14, at the Yelm Community Services food bank.

The last two months have been a whirlwind for Anita Haywood.

As a leading organizer of the Yelm Church of Jesus Christ of Latter-Day Saints’ efforts to help coordinate services at the Yelm Community Services food bank, Haywood said the need has never been greater.

“By the end of Thursdays, yeah, I’m pretty tired,” she said. “But it feels good to help people. Gives you an endorphin boost.”

For most of the last 18 months, volunteers from the church have come in early to the Yelm food bank to help unpack, pack, organize and distribute large amounts of perishable and non-perishable food on distribution days.

As the COVID-19 crisis has left many regional food banks low on volunteers with sharp increases in demand, Yelm Community Services is counting its blessings.

“It’s been fabulous having them,” said Cindy Cecil, Yelm Community Services executive director. “Honestly, the LDS is the focal point of it all.”

On Thursday, May 14, about 20 volunteers from the church helped the food bank during its weekly distribution.

The gymnasium at the food bank was filled with pallets, all of which were being packed and organized with non-perishable foods. In the early afternoon, members of the church, ranging in age from 10 to 58, worked dutifully.

“As a bishop, my responsibility is for not only the people in my ward, but also the people in the area,” said Bishop Adam Cornwall, taking a break from lifting heavy boxes. “I find this is a great way to give back to the community and see just what are the needs.”

Cornwall added that his ward has also been involved with mask-making clubs and assembling and distributing hygiene kits for the homeless during this pandemic.

As a church leader, Cornwall said he’s also responsible for ensuring the mental health and community spirit of his ward. While many of his church members’ refrigerators and pantries might be full during this troubling time, he knows that many are lacking the social fortitude they receive from attending service.

“One of my fears is depression … I’ve noticed youths struggling,” he said. “They’re getting into that slump of, ‘I don’t want to do anything anymore.’”

Volunteering opportunities such as this can help people with that issue, he said.

One church member who helps out often with the church’s food bank initiative is Kandice Rosenberg, 41, of Yelm, who brought her two sons along with her. She’s been helping out on distribution days regularly for the last year.

“I’ve been on both sides of the fence,” she said, adding that “it’s just an opportunity to give back.”

Like many in Yelm and its LDS community, Rosenberg is part of a military family. Her husband is currently deployed, so volunteering is a good way to keep the family busy during these uncertain times, she said.

Her sons willfully ask to volunteer, Rosenberg said. It is an opportunity to see their friends and fellow churchgoers, after all.

Boredom is what brought Kellie Rova, 44, of Yelm, to her first volunteer opportunity at the food bank. Shortly before the group began organizing for distribution, Rova said she was enjoying the work so far.

“I like doing it. I’ll come back. Gives me something to do,” she said. “I hate sitting at home.”

If she was at home, Rova admits she would just be watching television and cleaning up after her husband and three kids. She said it has been great to get out and talk with people.

Since the start of the pandemic, Yelm Community Services has experienced an influx in food that has been shipped to them from a variety of sources, Cecil said. Having the church members there to help has been greatly appreciated, especially with the recent increase in demand.

To stay in compliance with new state regulations, the food bank has waived its requirements of asking food pantry recipients to disclose their name, address, ZIP code and number of visits.

Cecil said now the only thing they ask recipients for is their family size.

“It’s created sort of a bubble of people to serve,” she said. “It really hasn’t started yet, the amount of food we’ll be getting.”

Earlier Thursday morning, a number of recipients dropped off potatoes that were being distributed by the Washington State Potatoes Commission at the Tacoma Dome. More than 200,000 pounds of the spuds were distributed at the location, the product of Eastern Washington farmers unable to find a market for their crop with restaurants largely closed.

Yelm City Council member James Blair was one individual who dropped off a couple large piles. He said he was part of a small group of volunteers who picked up the spuds for various organizations.

He delivered bags to about 15 families, then took the rest to Yelm Community Services.

The food bank also received a total eight pallets of liquid eggs and egg products from Wilcox Family Farms that week. Over the last month, the business has donated about 35 pallets of product, Cecil said.

From the Food Bank

“The food bank will be open on Thursdays at 1 p.m., and will serve clients until 3:45 p.m. Clients may not enter the building, and must wait in their vehicles. Staff will have carts of food already made up to give out to clients. There will not be the usual food bank sign-in procedures, to help to prevent the health issues. The staff will only ask the number of people in the family. People who come can only pick up for their own family. Please park in front of the food bank building, so that staff do not have to go far, as the staff are very busy with making up the bags, and the agency is short-staffed due to the health situation occurring. Please patiently wait your turn, and please follow the instructions given out by the staff and volunteers. Please do not park in the food bank loading zone.”