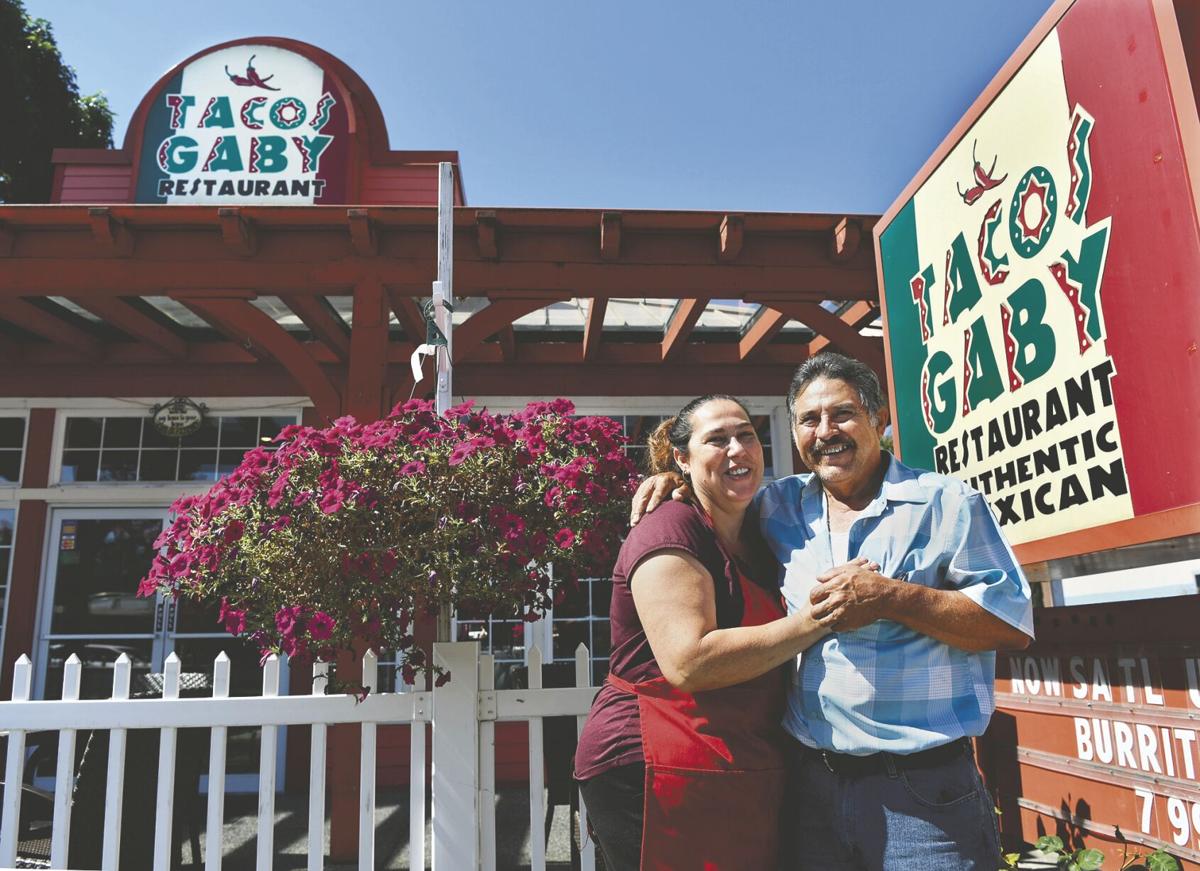 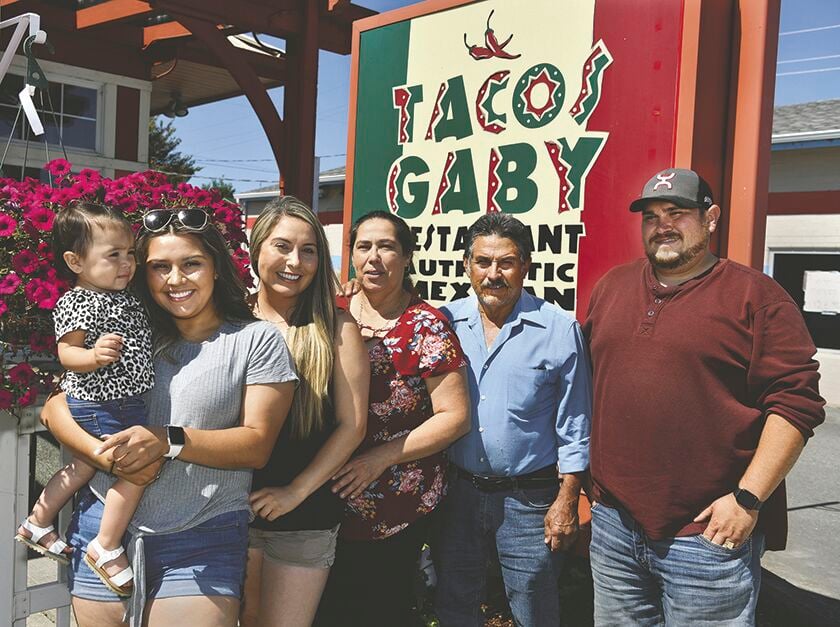 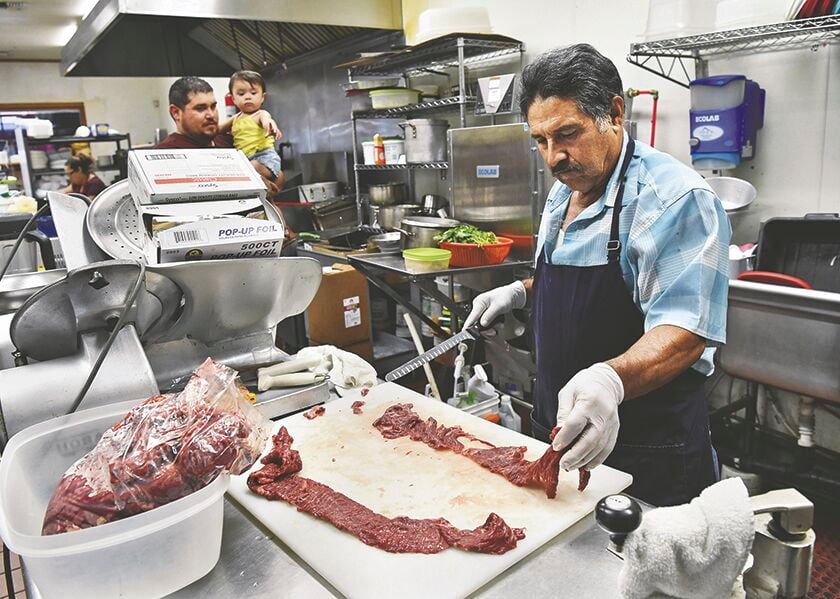 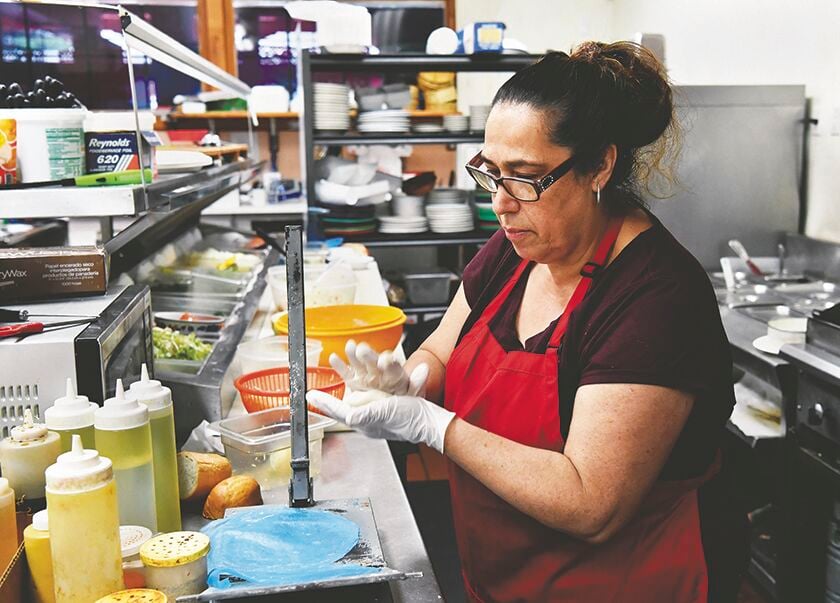 Taco Gabys co-owner Martha Mendez prepares ingredients on Tuesday, July 29, that she will press into a machine to make tortillas. 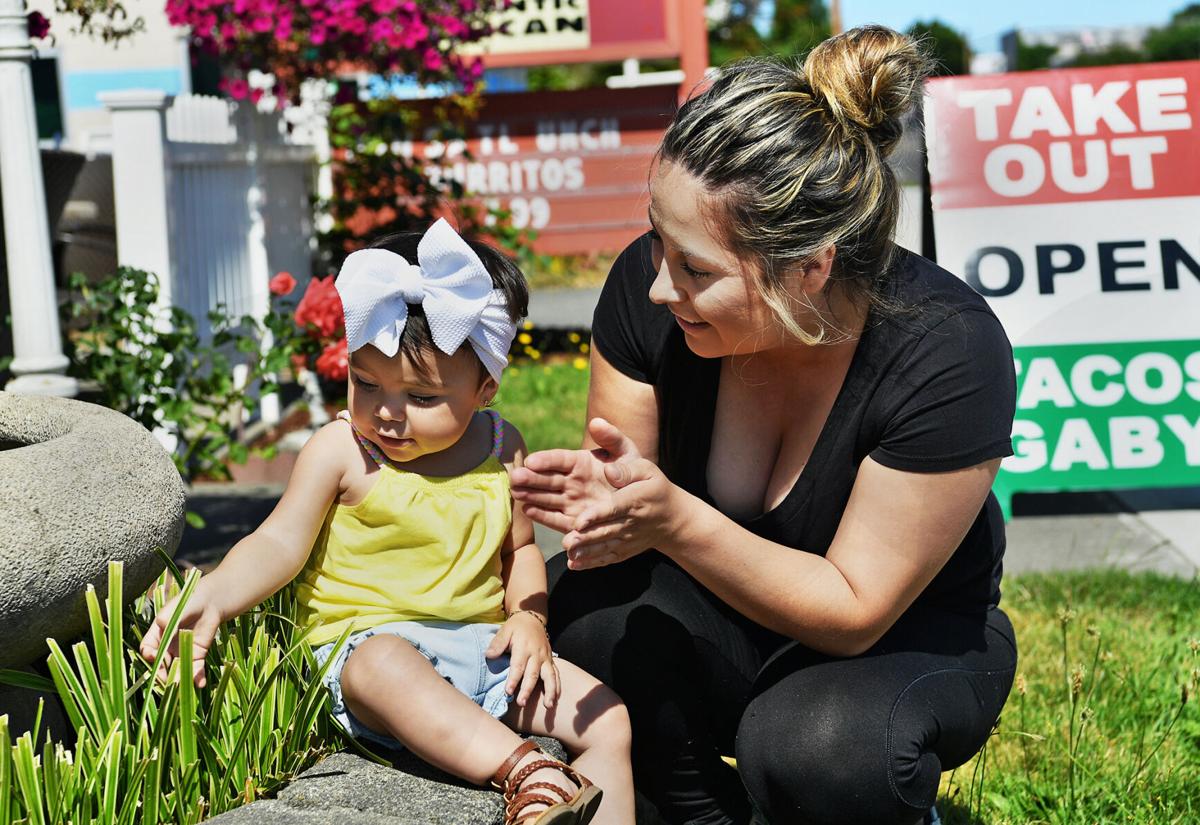 Gabby Mendez, manager of Tacos Gaby, plays with her daughter last week in front of the now-closed Mexican restaurant.

For a few lonely moments, Narciso Mendez had no words — only tears.

Memories — 12 years of them — were suddenly enveloping him like a family video on fast forward, leaving the soft-spoken man temporarily vulnerable and raw.

Mendez, 61, his wife Martha Mendez, 53, and their three grown children gathered last week to snuggle in a couple of booths at their Yelm restaurant Tacos Gaby. It was Wednesday, July 29 — the day after they had closed for good the popular Mexican-food eatery. Since 2008, Tacos Gaby had greeted customers and passers-by on East Yelm Avenue with its brightly-festooned decor and cozy front patio.

“We have put a lot of effort and work into the restaurant and sacrificed as a family,” Mendez said, crying softly before wiping his eyes beneath the eyeglasses he wore. “Even though we’re closing, I’m very grateful and appreciative to our customers who have followed us through our journey over the years.”

In the end, the decision to close was certainly no knee-jerk reaction, but it did involve knees — Martha’s, to be exact. The family matriarch had already undergone surgery on one knee and was now suffering with worsening rheumatoid arthritis — a brutal combination for someone constantly on the move in a fast-paced environment.

Narciso was starting to drag a bit, too.

The deeply tanned man with hair and mustache showing wifts of gray not only helped run a hopping restaurant five days a week, but periodically took off for Eastern Washington driving his “CISO Transport” semi-truck — his “other” job — to help deliver produce from the east’s orchards to warehouses.

“My parents are just physically tired,” said Gabby Mendez, 27, who with her brother Jose Mendez, 31, managed Tacos Gaby. “As much as they loved it, they wanted to retire from the business.”

But Tacos Gaby will not totally disappear.

In a nod to the past, when in 1992 the family’s Mexican food business began as a “taco truck” in Wenatchee — eventually moving to Yelm in 2002 because of the area’s more-temperate climate — Tacos Gaby’s food truck will eventually set up shop in a back corner of the Shell service station at 706. E. Yelm Ave.

The taco truck may begin service around the beginning of September, though no definite date has been set. The portable eatery will offer smaller, less-complicated versions of its restaurant’s top hits. They’ll include burritos, tacos, quesadillas, tortas, enchiladas, mulitas, chavindecas and alambres.

The truck — like the restaurant — has always been a family affair. When not in full service — as when Tacos Gaby the restaurant was open — the taco truck would park in Yelm during certain hours for walk-up customers or cater special functions such as weddings, birthdays, anniversaries and company parties.

“Since early on, the little girls (Gabby and her sister Melissa Mendez, now 21) peeked out of the taco truck’s windows to take customer’s orders,” Gabby recalled. “We were about 10 and 6 years old at the time.”

The taco truck’s tentative hours will be 11 a.m. to 7 p.m. Monday through Friday and 10 a.m. to 1 p.m. on Saturdays, when specialty dishes will be served.

Until the truck’s in place and ready to roar, the Mendez family will try to adjust to their suddenly altered existence. For Gabby, who has a degree in finance from the University of Washington Tacoma — and is mom to 1-year-old Liszet Guerrero-Mendez — the sudden change in the family’s circumstances is still too new to fully comprehend.

“It hasn’t really hit us, yet,” Gabby said last week through tears. “It makes me really sad that my parents’ hard work I’ve known my whole life comes down to us closing the restaurant.”

Melissa Mendez, who will continue to work post Tacos Gaby as a medical assistant at Yelm Family Medicine, will miss the camaraderie of the family restaurant.

“I enjoyed spending time with my family and coming here and cooking,” she said. “Our customers were like family — very kind and sweet.”

“I’ll miss our customers,” Jose said. “Whenever they came in grumpy they always left laughing. I enjoyed that camaraderie.”

“The food dishes all had their periods of popularity,” Jose explained. “People would discover different items and get hung up on them for a while and then pick new favorites.”

Jose, who with Melissa live on the outskirts of Yelm with their parents, intends to take a little time off and then secure a commercial driver’s license.

“I would like to drive a semi-truck and help Dad in his trucking business,” he said.

Martha, who grieves mostly that her deteriorating health factored in the restaurant’s closing, loved to cook, but didn’t enjoy washing dishes.

“I will miss the customers, the friendships we made, and the warmth of the people we met,” she said. “And if I could still physically work we would still run the restaurant.”

“The take-out service here was amazing. We have a very supportive customer base, and our revenue didn’t drop at all.”

The restaurant’s closing, in fact, may have come at an opportune time for the Mendez family.

Inslee and state Secretary of Health John Wiesman’s latest decree — ordered after Washington’s recent spike in COVID-19 infections, hospitalizations and deaths — requires restaurants in Phase 3 of the governor’s Safe Start program to allow only members of the same household to dine together indoors.

In addition, table size is limited to five people, restaurant occupancy reduced from 75 percent to 50 percent, social areas such as pool tables, dart boards and video games closed, and indoor bar service prohibited, though outdoor service may continue. Alcohol service inside must end by 10 p.m.

The regulations took effect on July 30.

“No, the decision to close was made before the latest regulations. It wasn’t discussed, and it wasn’t a factor.”

That’s not to say that COVID-19 was always out of sight and mind. For Narciso it was particularly unnerving at times.

“It was stressful and different for us, because we couldn’t be out with people like usual,” he explained. “We were worrying about what was going on, and that made it hard to focus 100 percent on what we were doing at the restaurant.”

And perhaps adding to Martha’s and Narciso’s swirling emotions is a simple fact parents through all generations face: Their children are grown up and prepping for new adventures.

Concluded Jose: “The kids are going their own ways. We grew up and were raised around the food business, and now it’s time to move on.”

According to the Mendez family, the Tacos Gaby building — which Martha and Narciso Mendez purchased about a year ago — will soon be leased to a Thai food restaurant. The state Liquor and Cannabis Board lists Si Racha Thai Restaurant in its new license application file as of July 21. This story will be updated as the Nisqually Valley News receives additional information.