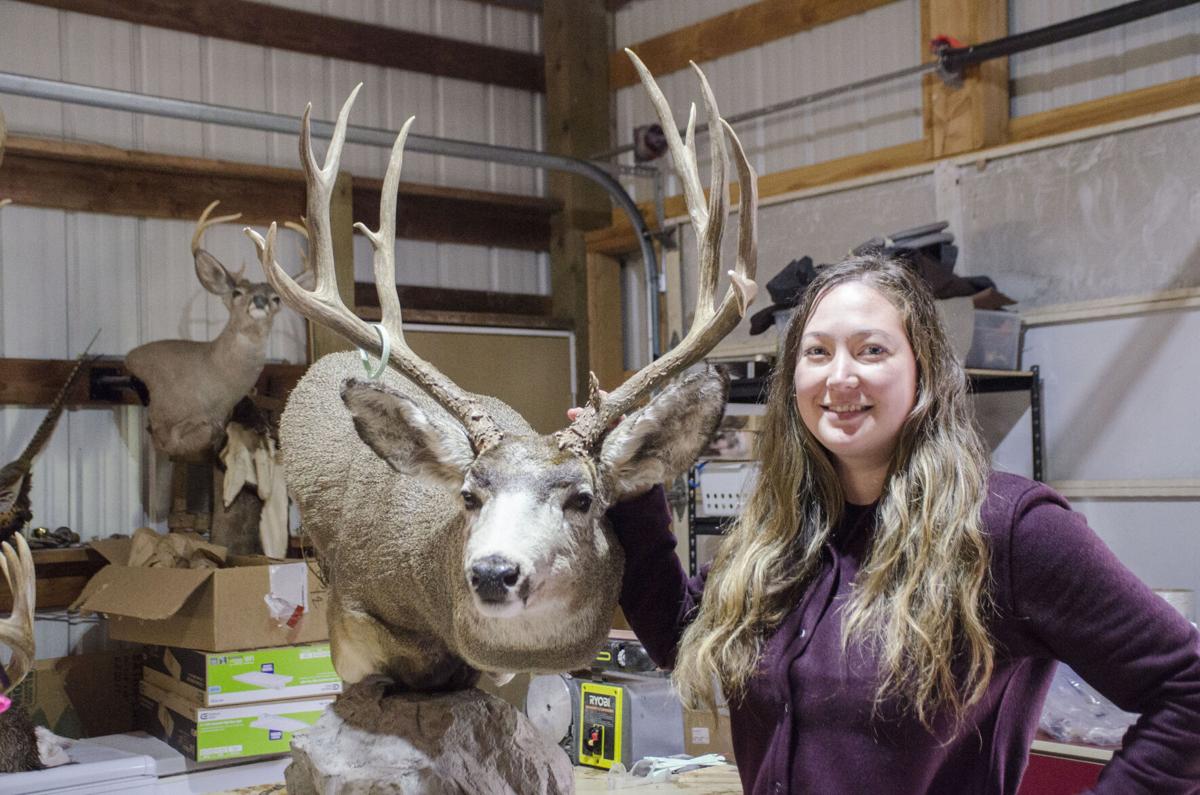 Alycia Lewis, 32, owner of Bucoda-based Last Look Taxidermy, poses for a photo on Friday morning with a buck mount she’s working on for a client. She plans on adding foam and other details to create a snowy scenery. 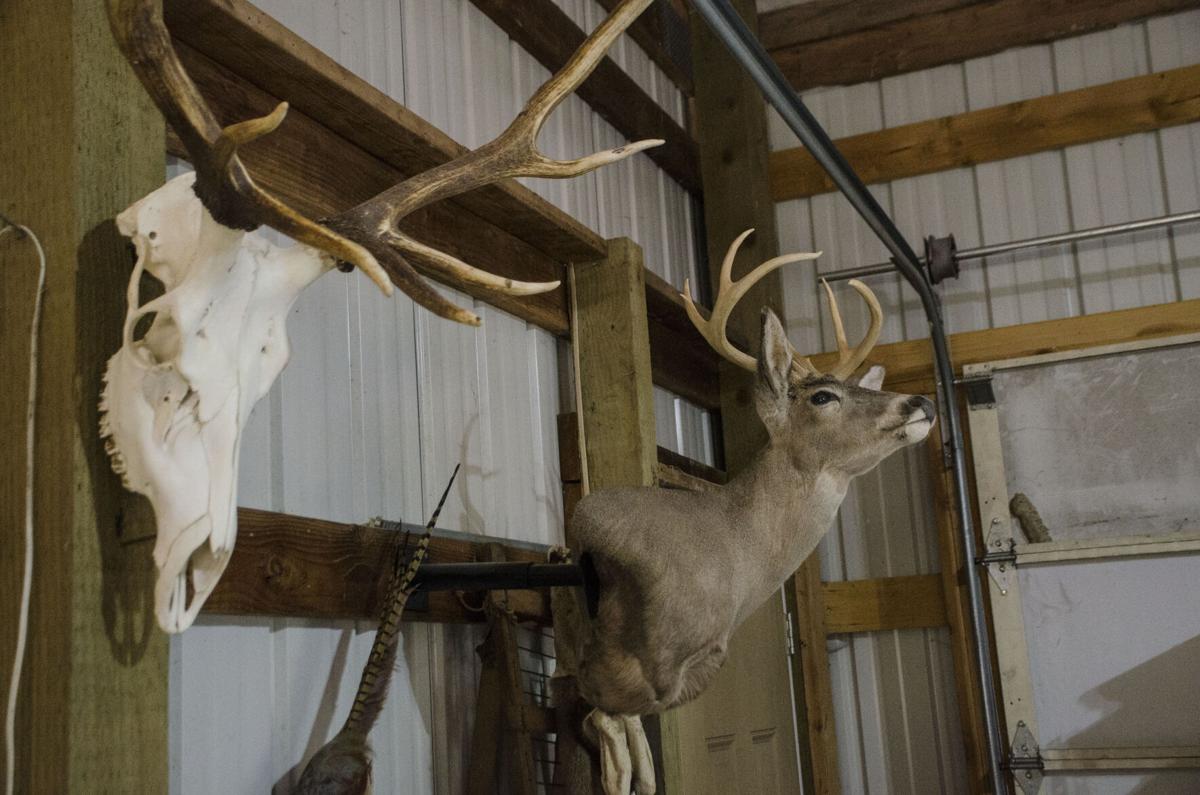 A hide and European mount are displayed in 32-year-old Alycia Lewis’s taxidermy shop in Bucoda. From a young age, she’s been interested in the form of animals. 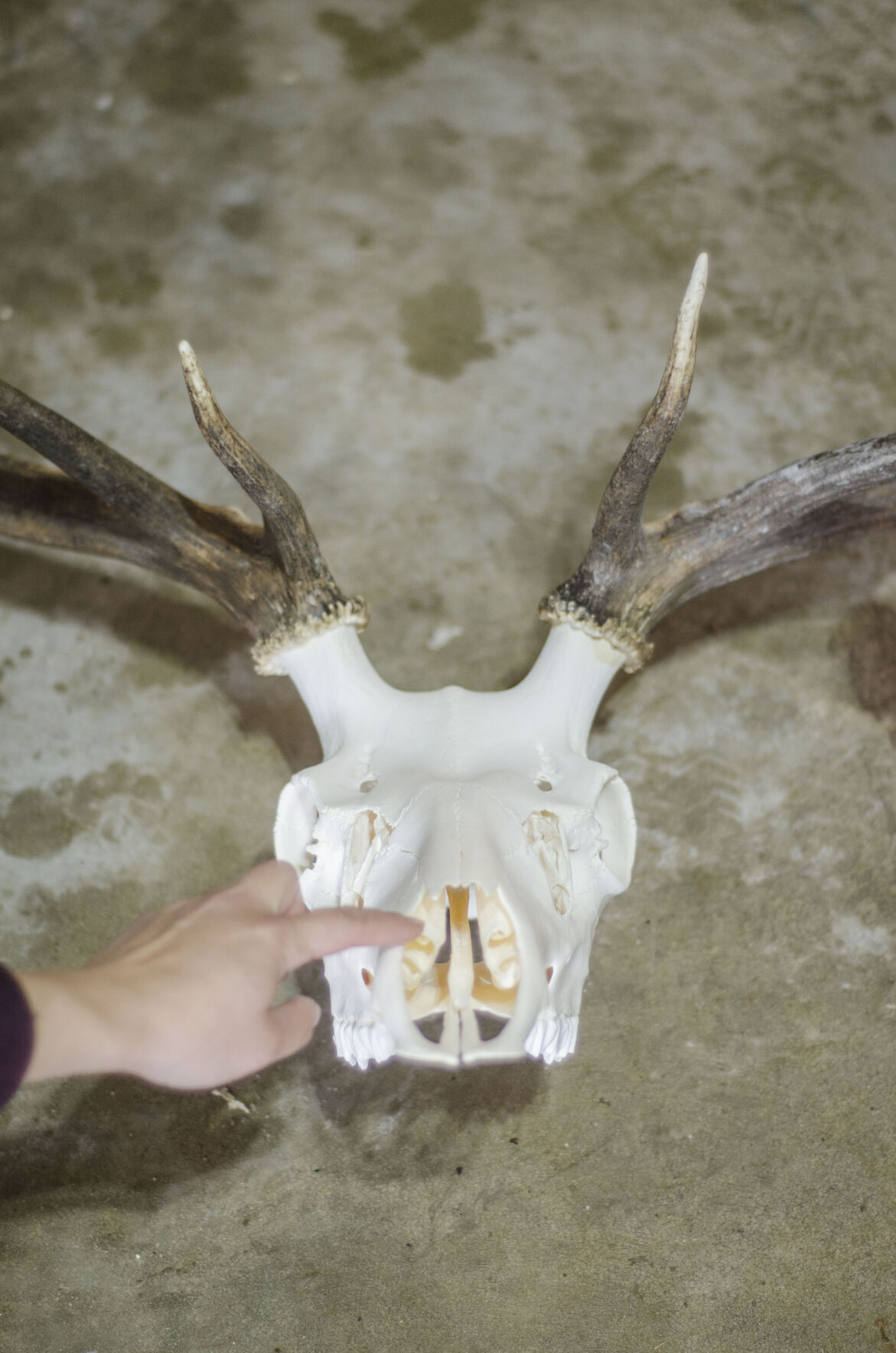 Alycia Lewis, owner of Last Look Taxidermy studio, points to a European-style mount’s nose to show the difference between using beetles to remove the skin, which is often the cleaner option, and boiling the carcass. 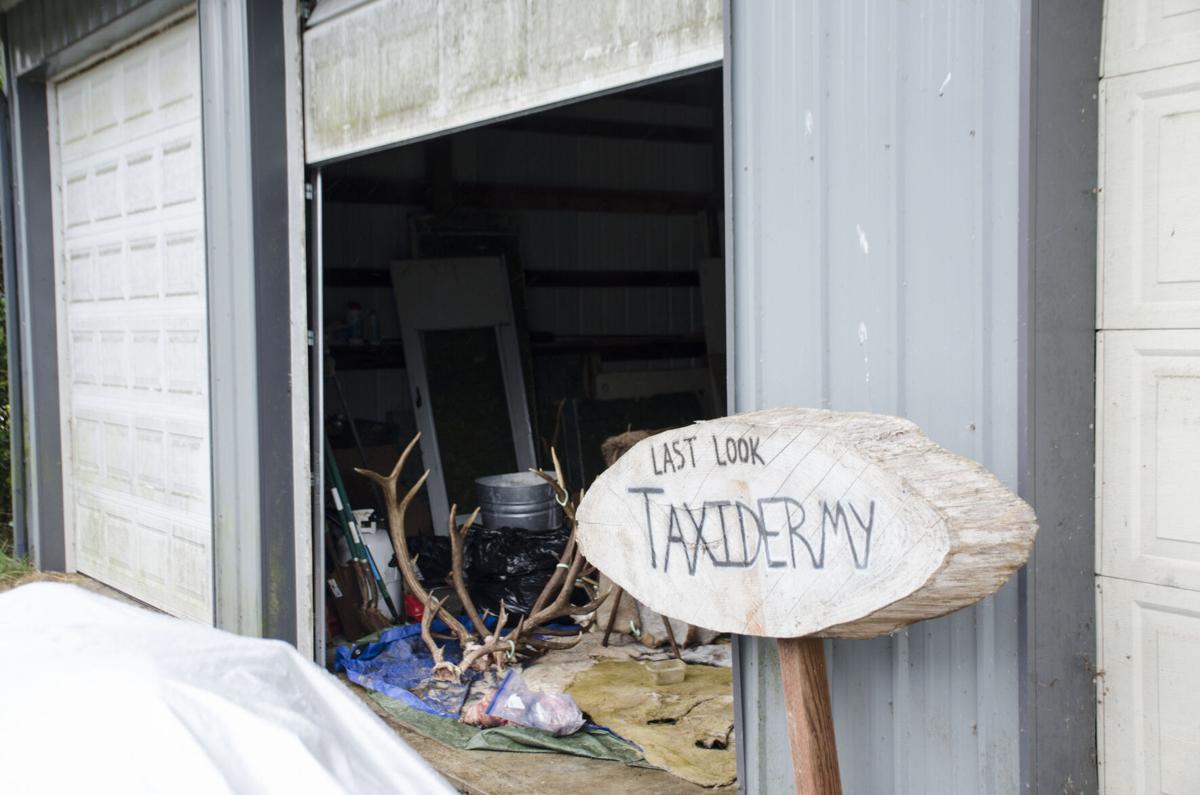 A rough and simple wood sign sits outside Lewis’s garage Friday morning displaying the name of her business. 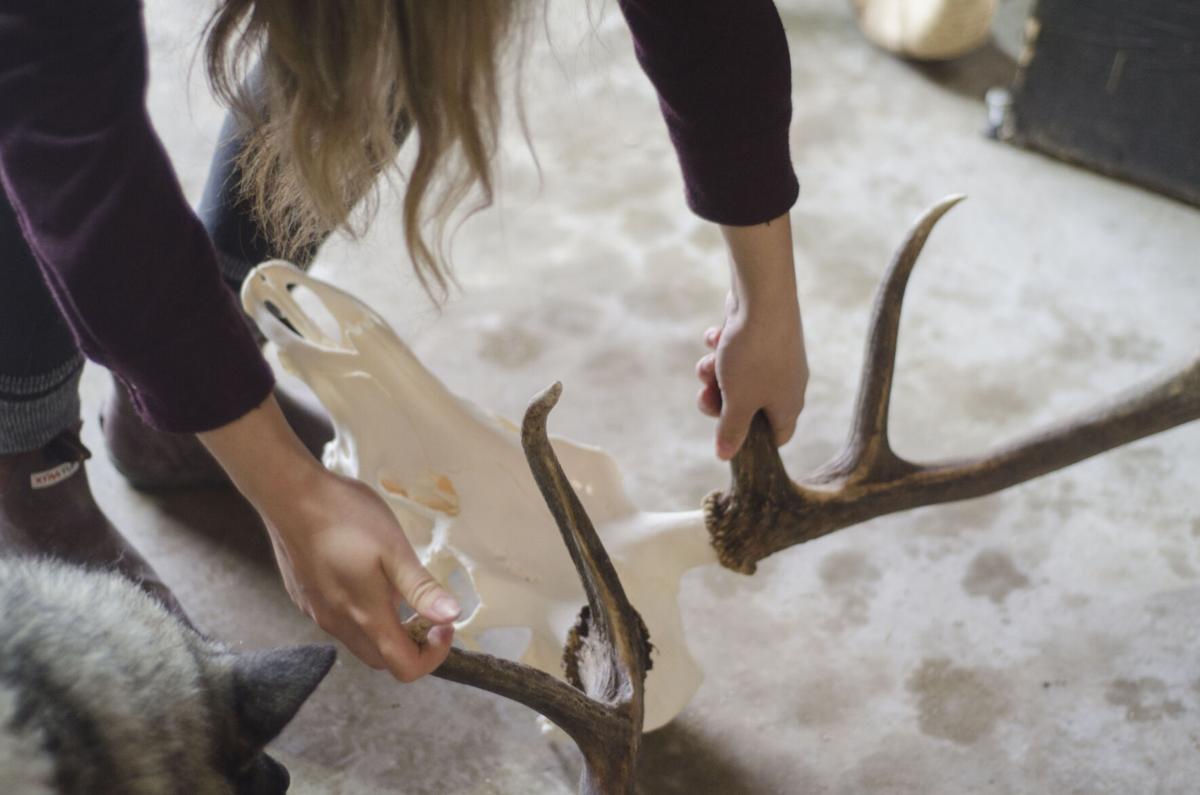 Alycia Lewis’s 2-year-old Norwegian elk hound named Gifford sniffs a European-style buck mount Friday morning as she sets it down on the floor to display it.

Alycia Lewis, 32, owner of Bucoda-based Last Look Taxidermy, poses for a photo on Friday morning with a buck mount she’s working on for a client. She plans on adding foam and other details to create a snowy scenery.

A hide and European mount are displayed in 32-year-old Alycia Lewis’s taxidermy shop in Bucoda. From a young age, she’s been interested in the form of animals.

Alycia Lewis, owner of Last Look Taxidermy studio, points to a European-style mount’s nose to show the difference between using beetles to remove the skin, which is often the cleaner option, and boiling the carcass.

A rough and simple wood sign sits outside Lewis’s garage Friday morning displaying the name of her business.

Alycia Lewis’s 2-year-old Norwegian elk hound named Gifford sniffs a European-style buck mount Friday morning as she sets it down on the floor to display it.

Taxidermy is a learning game — you have to make mistakes, consider new ideas and work them out in order to garner a reputation within the field.

Lewis, 32, a Bucoda resident, is the owner of Last Look Taxidermy studio, which she’s proudly operated for the past five years. Her company’s name is based off a description of what customers frequently tell her they’d like their buck or bobcat to look like in the moments before they bite the bullet.

She operates the business out of a garage located on property she also leases from her landlord. She dreams one day of opening her own studio, something much larger and with better lighting.

But until then, this is where the nitty gritty work gets done.

“It could be attributed to animal numbers, or they get lucky and it’s a special draw tag they get,” she said from inside her studio, which plays host to a number of bear hides and buck mounts. “For a lot of predators, it’s been a really successful past couple years, maybe due to the area being built out more.”

That business, while she said she’s thankful, can complicate things. Her shop has stopped accepting new clients for the remainder of the season. She said this is to keep turnaround times on mounts and displays reasonable.

Lewis said she usually tries to keep wait times around 9 months, though some projects can take upwards of up to a year to complete. The COVID-19 health crisis has also made an impact, though quite minor, that extended wait times and caused its own headaches for the industry.

One example, Lewis said, is that the tanning contractor she usually sends hides off to temporarily shut down recently, causing delays for studios both big and small to get their product back to their clients.

Lewis’s love for taxidermy started at a young age. Growing up in rural Kitsap County, she was always interested in the animal form, often drawing and coloring pictures of animals and tagging along on her dad’s hunting trips.

Her first interaction with the laborious process of skinning and sowing animals began at the age of 14.

“(My dad) brought me over to a taxidermist he was friends with. They needed help, and so I started skinning for them and sewing for them and stuff like that. I did that for a little while for them, and started mounting stuff for them,” she said.

She learned a lot about skinning and forming animals from that brief apprenticeship, which allowed her to get a head start on taxidermy school

By the time she was considering taxidermy school, which was about six years ago, Lewis and her husband Daniel were working on forestry consultation out of Chehalis — her husband still works as a consultant, but she said she needed a change after applying for a number of jobs.

“I took that as a sign to do what I wanted to do, and that was either to be a fishing guide, ‘cause I’m pretty good at fishing and have a lot of knowledge with that, or get back into taxidermy,” she said. “At that point in time, the river returns were horrible. There were a lot more people trying to be guides.”

At that fork, she chose the taxidermy route, hoping to learn the more intricate details of the craft.

For about a month, around 2014, Lewis moved out to Kooskia, Idaho, to learn under Troy Rose, the master taxidermist who operates The Artistic School of Taxidermy, located in the solitary hillsides just west of the Nez Perce-Clearwater National Forest.

One of the things Lewis said she appreciated being Rose’s pupil was his attention to detail. During her tenure, she said they learned about the intricate muscle details of an animal and refined their craft using that knowledge in order to make their work look more natural and to bring life back.

Lewis said she worked on mounting deer heads, birds and all other sorts of life-size animals while there.

“His school is at the top of a mountain,” she said. “The setting was worth the time.”

Shortly after coming back to Washington, Lewis said she applied for her business license and has operated out a few studios, including in Olympia.

From the small European mounts and birds to large black bears and bucks, Lewis said she does it all and added that it’s important for her to keep her prices reasonable (an average shoulder amount costs about $625 she said, with a lifesize black bear costing a minimum of $3,000).

“I think the whole COVID thing has really created a riff between those who have enough to comfortably live and those who don’t. The clients that couldn’t’ afford taxidermy in the first place still can’t afford it now, and those who could still can,” she said. “I would love to have somebody who works a minimum wage job, some retail job, to be able to afford to do taxidermy.”

The work of bringing life back into a deceased animal is just like any art — it’s time consuming, and the good ones are usually quite specific on the details.

“Taxidermy is an all-encompassing craft that requires skill in woodworking, design, mold creation, tanning, animal anatomy, and much more. But as important as craftsmanship, a connection to the outdoors and a respect for nature is central to the process,” Lewis writes on her website.

But, like all good art, there are phases to the madness.

Lewis said her work can be broken down into four primary phases:

• The first phase involves about four hours of meticulous skinning to clean the inside of the animal’s hide. She then allows three to four days for salting and drying the hide.

• The second phase involves tanning the hide, which can be done in house but Lewis said she opts to have that work shipped out. This can take a few months.

• The third phase involves measuring out the hide and determining the form the animal will take with a foam form. “Because it’s foam, I can alter that form to be exactly what the original deer looked like,” she said, adding that a common misconception within the industry is that taxidermy animals have their bones inside.

• The fourth and final phase includes sewing and mounting the taxidermy animal, which are often accompanied by a variety of scenery items such as rocks, logs and brush.