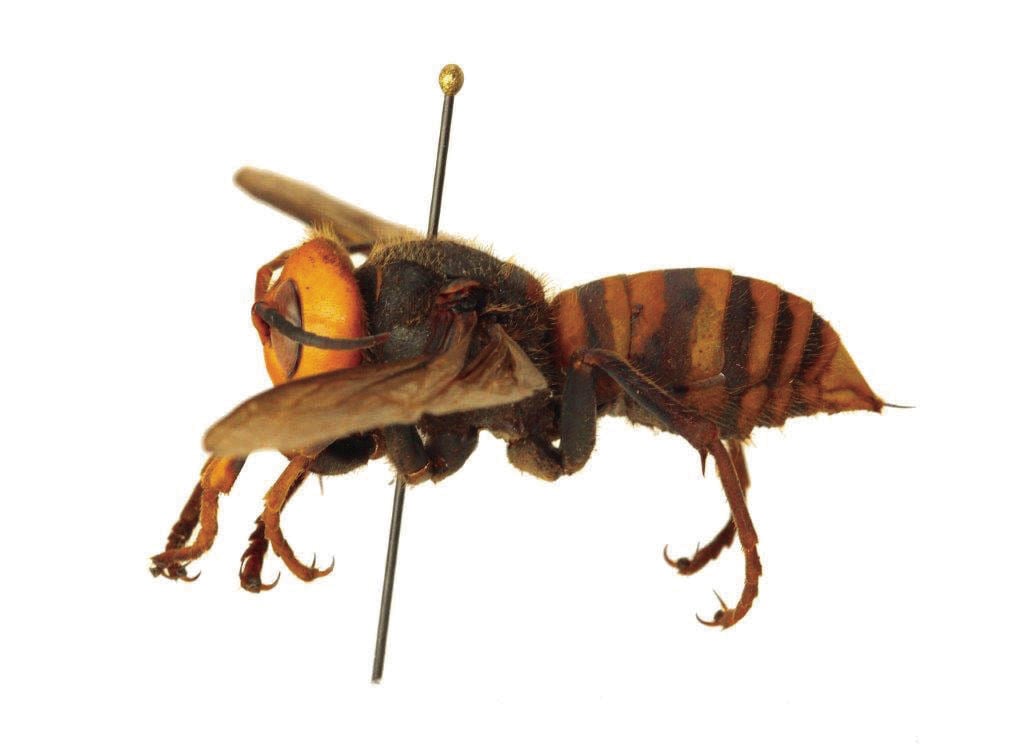 An Asian giant hornet is seen in this photo provided by the state Department of Agriculture. 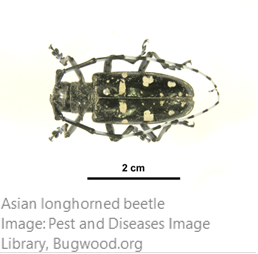 Invasive Longhorned Beetle: The larvae of this large beetle feeds on and in the wood of a tree. When the beetle becomes an adult, it emerges through holes that weaken the tree further. The beetle is extremely destructive to hardwood trees. While it is not known to be established in Washington today, it has been found multiple times in the past. A swift response stopped the spread and potentially millions of dollars in damages 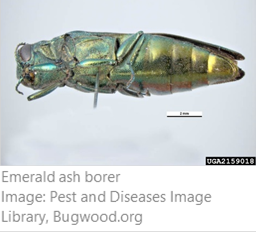 Emerald Ash Borer: This small, wood-boring beetle attacks and kills ash trees. The larvae burrow under the tree’s bark and eat the sapwood. Once damaged, the sapwood can’t transport water and nutrients, causing the leaves and tree to die gradually. While not yet known to be in Washington, it is spreading westward from the eastern United States. 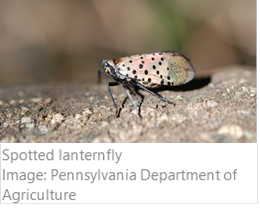 Spotted Lanternfly: This piercing, sucking insect feeds on sap from a variety of trees including apples, cherries, grapes, plums and walnut, and also on hops. While not yet found in Washington, the lanternfly has been intercepted in California as a hitchhiker on goods coming from the eastern United States where it is established. 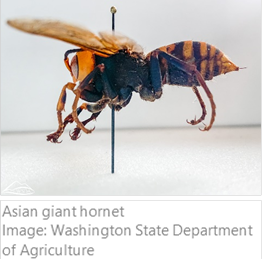 Asian Giant Hornet: Not all insects that you could find in a tree are tree-killers, but they cause other problems. This hornet has been found in Whatcom County and kills honey bees. Though not typically aggressive to humans, it will attack anything that threatens its colony, which usually nest in the ground. It can sting multiple times and has powerful venom that can inflict serious injury, or in some cases, death.

Throughout the month of August, the Washington Invasive Species Council and the Washington Department of Natural Resources (DNR) are asking the public to take a couple of minutes to check trees in their communities for invasive insects. August is the peak time of year that wood-boring insects are most often spotted outside of trees.

“State and federal agencies do a fantastic job at preventing the introduction of invasive species to the United States, but occasionally some slip through,” Executive Coordinator of the Washington Invasive Species Council Justin Bush said in a news release. “When a new invasive species is introduced, we need to know as quickly as possible so we can stop its spread.”

Invasive species are non-native organisms that include plants, animals and diseases. When introduced to a new environment, they do not have natural predators or diseases to keep their growth in check. Once established, they may damage the economy, environment, recreation and sometimes human health.

“Invasive insects impact our healthy forests and, in turn, destroy timber we manage that provides funding for schools, local services and our counties. The damage also increases fire risk and restricts recreation opportunities,” Commissioner of Public Lands Hilary Franz said. “Trees play an important role in our state economy and provide significant environmental benefits from clean air to habitat for wildlife and healthy waterways that support salmon and other fish. Tree loss from invasive species is something that we can avoid by stopping the spread of invasive insects. The public plays a key role in this effort as our eyes on the ground.”

What to look for

State officials urge the public to be especially aware of four invasive insects during their tree checks.

How You Can Participate

“We’re asking people to take 10 minutes to search the trees in their yards and neighborhoods,” Bush said. “If you find a suspected invasive insect, take a picture and send us information on the Washington Invasives mobile app or on our Web site. It’s quick and easy and we’ll connect you with organizations that can help.”

The photographs of the insect should show enough detail that an expert can verify it. Include an object, such as a coin or pencil, next to the insect to indicate the insect’s size.

There are species, which aren’t a problem, that look like invasive insects so report but don’t kill the suspected invader, Bush said.

There are simple actions that anyone can take to avoid introducing and spreading invasive insects.

• Buy firewood where you’ll burn it or gather it on site when permitted. When moving firewood you might also be moving invasive insects hiding there.

• When traveling locally or moving to a new area, check your bags and boxes to make sure they are insect free. Invasive insects, which can be in any life stage from larvae to adult, can tag along easily in bags and boxes and on items that have been stored outside or in your garage.

“To successfully prevent and stop invasive species requires a whole community approach,” Commissioner Franz said. “Taking just a few minutes to check the trees in your yard can go a long way to ensuring that the forests we all love today are still here tomorrow.”